This means breakfast, lunch and dinner in the top-floor ‘Aroma’ restaurant are never a humdrum affair and an evening sipping cocktails there is imbued with an overriding aura of romanticism. 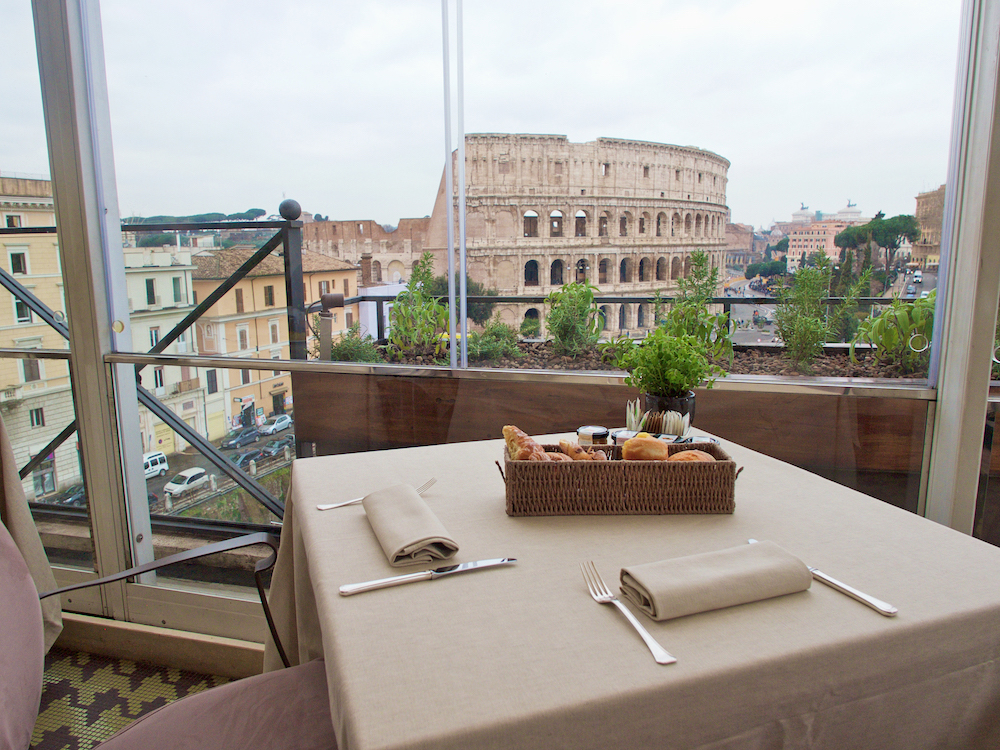 The historic Roman arena, known as Ludus Magnus, is linked to the Palazzo by a secret underground passage through which gladiators would enter the Colosseum, ready to do battle. Remains of the ancient site can be viewed in the hotel’s basement.

A member of Relais & Chateaux, the hotel began life in the early 17th century as the villa of the Evagelisit family, designed by the architect Giovanni Battista Mola. In 1748, it was completely rebuilt, becoming a hunting lodge for the noble Guidi family. Count Goffredo Manfredi, one of Italy’s leading entrepreneurs and construction magnates, then stepped into the picture, purchased the villa in 2002 and opened ‘Hotel Gladiatori.’ Major renovations took place in 2009 when it received a five-star rating and now the five-floor, 36-room renamed boutique property is part of the Manfredi Fine Hotel Collection, a group owned by Counts Goffredo and Leonardo Manfredi that includes the Punta Tragara resort in Capri and five luxury rental apartments in Rome.

I entered the intimate lobby a step or two off Via Labicana to find myself under a stylish black Murano glass chandelier facing an impressive framed wall-map of ancient Rome beneath which sits an elongated leather couch on a smooth multi-hued marble floor. The hotel’s overall style is a mix of classic and contemporary, with modern furniture and lighting by designers such as Ingo Maurer complementing elegant antiques including 16th century paintings.

A small reception desk lies to the right and a cozy, carpeted, high-ceilinged relaxation room to the left, its shelves stacked with books ranging from a heavy pictorial history of Michelangelo to one about the Mafia. Furnishings here include comfy armchairs and a sofa with – strangely – the friendly faces of The Beatles beaming from its embroidered cover. On the opposite wall is a framed portrait, the more serious face of Count Goffredo.

Our room, 24, in the prestige category, was contemporary in style, with various shades of gray. It offered side views of the excavated site that once housed the gladiator arena established around 90 AD, and featured iconic Italian elements such as marble-topped tables, a giant circular wall mirror and speckled marble skirting along the floors and parquet with carpeting overlaid.

Our bathroom housed a separate shower and a bathtub with a comfortable head-rest. Toiletries were Acqua Di Parma. Another room we examined on the other side of the building overlooked the Colle Oppio, a park popular with joggers that contains the remains of Domus Aurea, Emperor Nero’s extravagant three-story villa.

Rooftop ‘Aroma’ restaurant received its first Michelin star in November 2014 under chef Giuseppe Di Iorio, but, unfortunately, we were not able to savor his cuisine as the kitchen was closed for renovations when we visited. I’m informed, however, that Giuseppe favors a light, modern Mediterranean style of cooking featuring fresh seafood, homemade pastas and a variety of breads baked fresh daily in-house.

In terms of sports facilities, the hotel lacks a spa but in-room massages can be reserved and there are mini-gyms in every suite with Technogym equipment.