Hard to believe that a former hat factory could morph into chic luxury accommodation – but that’s the story of the Refinery Hotel in New York’s Midtown.

A rug at the front entrance adorned with scissors as well as tools of the millinery trade hanging behind the concierge desk allude to this intriguing transformation.

For this 12-floor, 197-room hotel occupies the original Colony Arcade Building near Bryant Park, seven blocks from Central Station, which a century ago was a hub of America’s clothing trade.

In the early 1900s, due to exorbitant prices in Paris and the shopping mecca of ‘Ladies’ Mile’ running from 14th to 23rd Streets moving to Midtown, business in this New York neighborhood exploded. As couture houses and garment factories set up shop to take advantage of the boom so too did enterprising brothers, Frederick and Robert Zobol, who in 1913 promptly cut the ribbon on this neo Gothic-style building.

Positive impressions begin with the hotel’s façade. The building is based on the 19th century ‘base-shaft capital’ design, meaning it has the proportions and aesthetics of a classical Greek column. Sculptural quatrefoils, original window shields and eagles enhance the neo-Gothic effect.

The interior has a post-modern yet industrial sense about it and its retro rooms feature 12-foot ceilings, windows that open, dark, brushed-oak hardwood floors, mosaic tile bathrooms and original art.

Highlights of our room included a lampshade in the corner posing as a 20th century photographer’s flash-bulb with print that replicates the quatrefoils on the building’s exterior, as well as a writing desk crafted in homage to the Singer sewing machine once used by the workers and artisans all those years ago. Even the coffee-table reflected more than a hint of nostalgia, designed as it was after old factory carts.

Our bathroom featured a walk-in shower and all rooms are loft-like, atelier style.

On the lobby of each floor are old-fashioned, round-dial telephones connecting guests to the front desk. 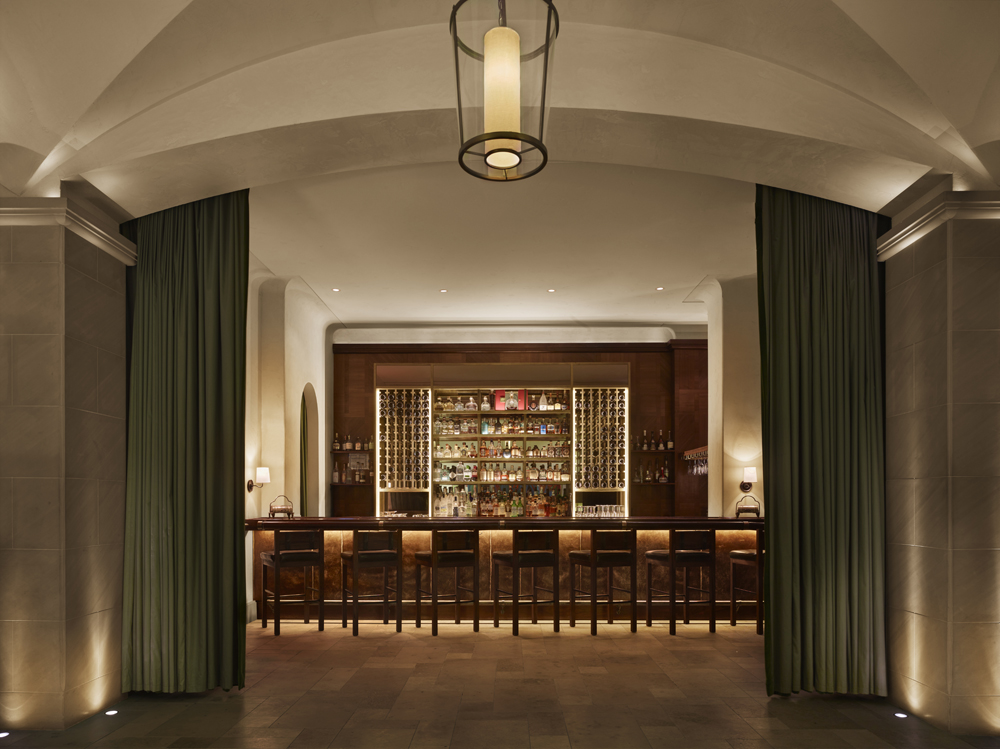 In terms of location, convenience doesn’t get much better. The hotel is a five-minute walk from Times Square and 10 minutes from Broadway theaters. Attractions such as the Beaux-Arts styled New York Public Library, the Highline, the Museum of Modern Art and Rockefeller Center and Observation Deck are all within a leisurely stroll. If you want to follow the thread of the fashion theme of the Refinery, visit the nearby Fashion Institute of Technology Museum and the Fashion Walk of Fame.

As for the hotel’s popularity, it is necessary only to see constant groups of trendy young people waiting on the elevator for the rooftop bar on a Saturday evening or the packed tables for weekend brunch in the ‘Parker and Quinn’ bistro-style restaurant designed by architect Derek Saunders off the main lobby. The rooftop, once a grand industrial space, offers panoramic views over the Empire State building, and features French terracotta floors, a fountain and a fireplace. An alternative meeting place is the cozy ground-floor ‘Winnie’s Jazz Bar’ opposite the reception desk which nods to the Prohibition-era salon of the building’s original incarnation and is named after Miss Winifred T. McDonald who ran a tea salon here. 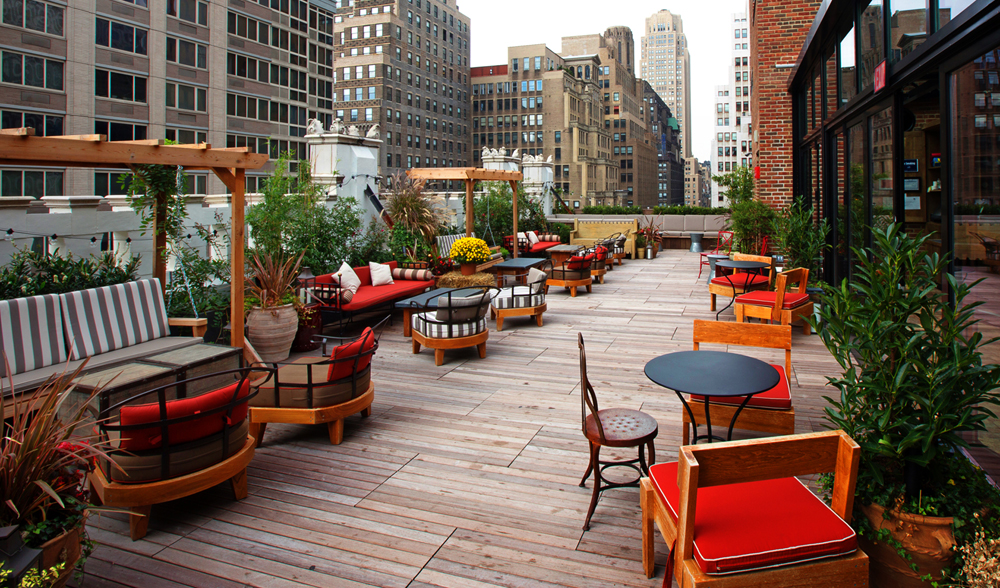 Booking in advance for brunch, we managed to nab a discreet wall booth near the hostess desk in the restaurant, a strategic people-watching vantage point. Consisting of two large rooms with an oval-shaped bar in the middle, guests sat on high-stools along the bar counter; in comfortable, leather-seated booths as we did; or at larger tables set up for bigger groups. A score of vintage black and white photographs decorated the walls, depicting individuals and scenes from the pre-1950s, some reminiscent of the glory years of the garment district. Glimmering crystal orbs hung from the ceiling alongside simple spotlights, with old-fashioned lamps above the booths. Piped jazz music overhead was straight out of the Prohibition and Big Band eras. Two 12-tap racks reflect a wide range of draught craft beers and ales and the bartenders were kept extremely busy filling cocktail orders. Wallpaper with a floral motif made it seem as if guests were enjoying themselves in someone’s sitting-room, a notion enhanced by the mosaic tiled floor. 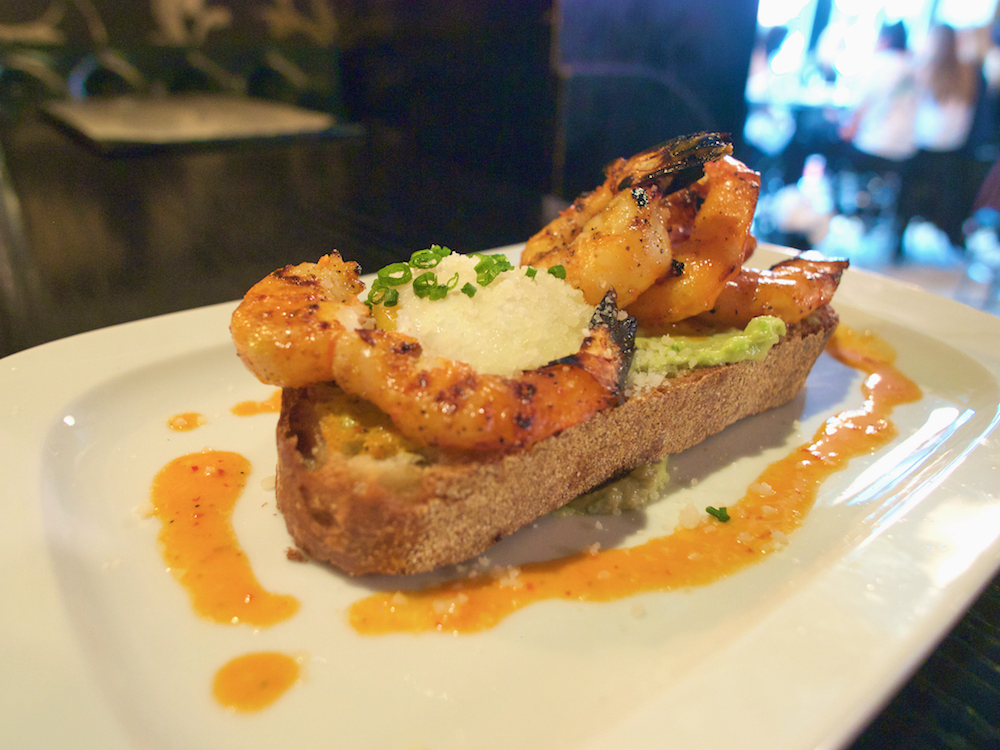 Preparing for an exploration day in the Big Apple, we chose several dishes each, including grilled shrimp on a slice of sourdough bread topped with avocado and chili, as well as the meal’s highlight, butcher’s meatballs served with sourdough, cream and chives. Hamburger came as a generous slice of meat in a brioche with a layer of streaky bacon and melted cheese on top. We couldn’t resist the French toast with slices of poached apples and the Jacques Torres bonbons, handmade in New York.

The Refinery is a charming, retro hotel that grants nostalgic insights into a former era, offers diverse options for entertainment and is close to many of New York’s cultural highlights.