Sipping a cappuccino while listening to the soft piano melodies of Chopin and gazing idly at street activity on the busy Rue du Rhône from a nearby window, I felt completely at ease. 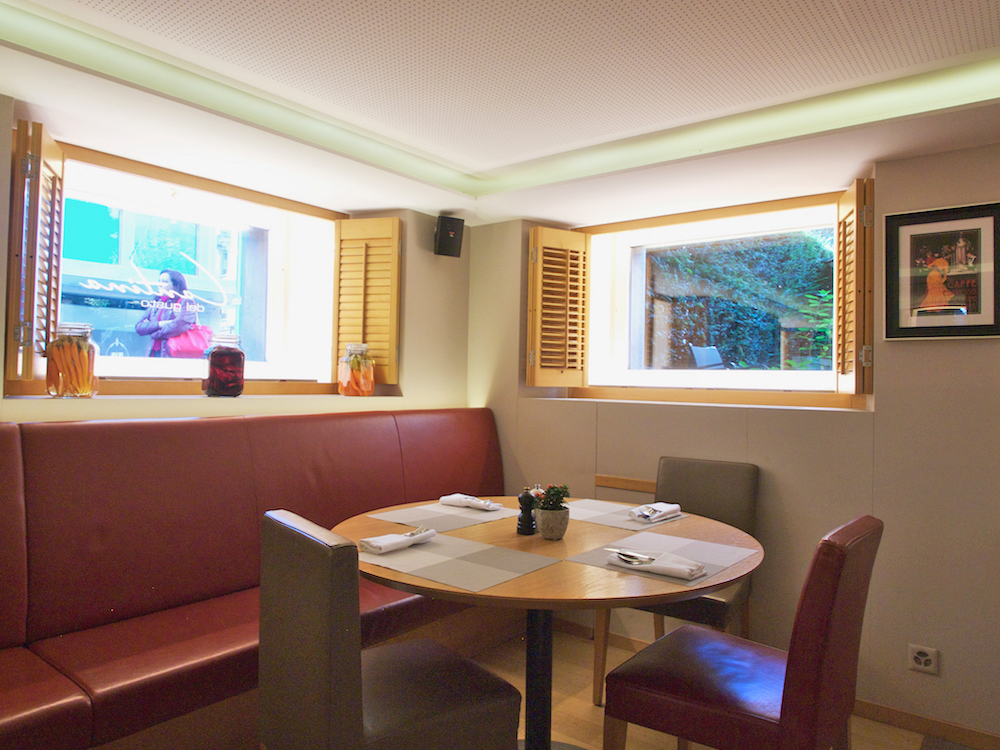 I was sitting alone at breakfast in the ground floor ‘Gusto’ restaurant, my companion having left to explore the shopping district. Most guests had departed leaving a soothing silence in their wake. Gazing around me at the simple décor, I could easily have been in a traditional Italian bistro in the bella vita era. 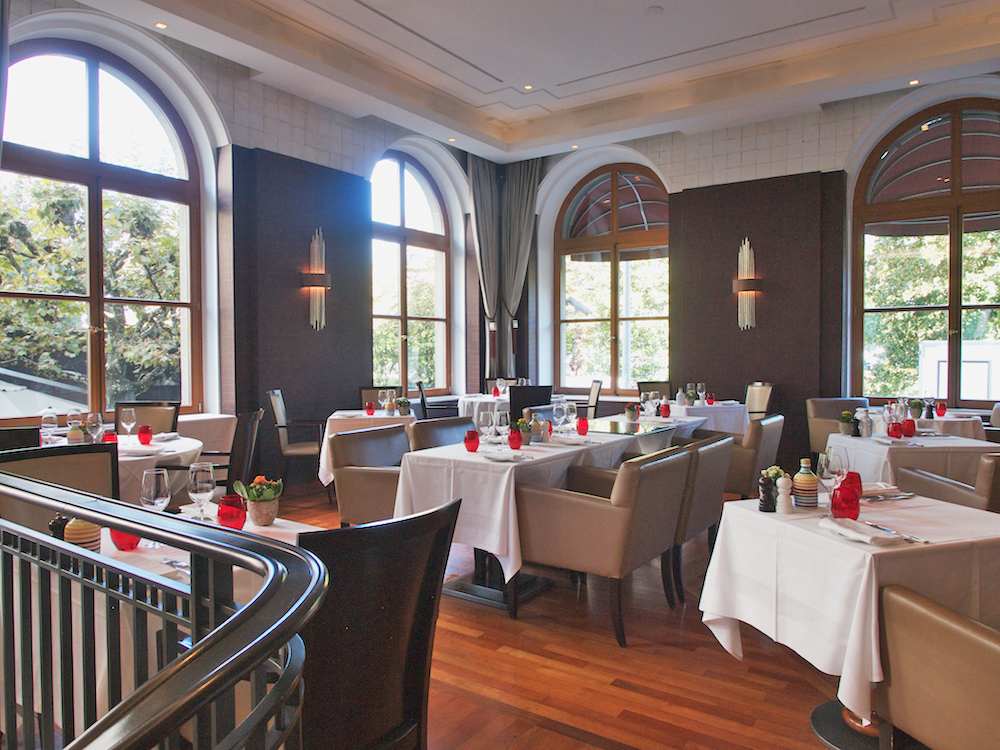 The two-floor ‘Gusto’ and outside patio is the place not only for breakfast but also for dinner where later that evening we found ourselves seated on the upper level, reached directly from the reception desk, in a more formal, elegant atmosphere, complete with starched white linens and gleaming cutlery.

While in Italy, or indeed any place replicating same, it is a culinary sin to skip courses so encouraged by the delicious-looking dishes served up to other guests under the watchful eye of chef Alessandro Cannata we decided go one step further and indulge in a new seven-course tasting menu.

Embarking on what turned out to be a captivating 3-hour dinner involving stimulating conversations with French assistant manager, Jeremy Biemont, Sardinian sommelier, Giacomo Piseola and head chef, Alessandro Cannata we started with a vegan autumnal dish of seasonal mushrooms including porcini and chantarelles, some cooked, some natural, with gluten-free bread crumbs, cacao and black garlic, followed by a tagliatele, of cuttlefish not doura wheat, with Puttanesca sauce (garlic, anchovies, crushed red pepper, basil, olives and capers). Two fish dishes followed – brill stuffed with chanterelles and Piemont hazelnuts and pan-seared cod with cima di rappa (similar to broccoli and kale). Returning us landward was delicious, soft-textured venison slowly marinated in yoghurt and seasoned roots.

Cannata’s daring creativity is boundless, amply illustrated in his combining black garlic, ginger and cocoa in the same dish, with superb results.  As for desserts, does it get much better than meringue and ice-cream made from gorgonzola and tortino caprese fondant, roasted chocolate ice-cream with caramelized hazelnut?

A different libation accompanied each dish, including a Franciacorta sparkling wine from the 17-hectare Chiara Ziliani vineyard on a small, morainic hill in the village of Provaglio d’Iseo near Brescia, Lombardy; a Monte dall`Ora,Valpolicella red from Venice, surprisingly served with the cod; and a crisp white made from the petite arvine grape in the Gerald Clavien winery in Valais, Switzerland.

Guests can also relax in the spacious ‘Mirror Bar’ directly opposite the reception desk, where wide windows grant clear views across the road to the lake and garden foliage. Leather chairs, gleaming lacquered tables, thick curtains and, of course, mirrors, create an art deco atmosphere. An alternative retreat for leisurely drinks, weather permitting, is the hotel’s 5th floor terrace, one of only a few such hotel rooftop terraces offering panoramic views over Lake Geneva, the Jet d’Eau and both left and right banks of the city.

The hotel, which first opened in 1854, has two entrances, a main front lakeside and a rear Old Town one. Entering the former, one passes a street-level concierge desk, opposite of which is a giant, almost surreal-like, wall painting depicting colorful harlequins, ducks and even a flying horseman. Glass display cases line the walls promoting brand names such as Ivy, fine jewels; Panerai, watches; Ever Green, toiletries; HSA (Hakim Sahraoui), Geneva Design and Bel y Cia, clothing.

Our room, 415, was a contemporary chic city loft, with high ceiling and a bathroom encased in glass from which we could admire the Jet d’Eau while showering. It also doubled as a one-person hammam. A large mirror opposite the bed, within which the TV hides, and another at the entrance of the room make space seem even greater than it was. Straight-line furnishings in grey and light brown tones create an uplifting contrast to a Monet-like flower wall backdrop behind the bed.

In addition to our memorable dinner experience, we found hotel service during three-day stay to be extremely warm, personal and efficient.

As a luxury hotel with an historic pedigree and art deco design in a marvelous lakeside location and a restaurant serving outstanding food, Hotel Metropole deserves top marks.

How did you celebrate #worldwhiskyday ? We had a wide selection and we’re sharing our #sensorytravelexperiences with you #worldwhiskeyday #wisky https://worlditineraries.co/2020/05/14/world-whisky-day-travel-with-you-senses%e2%80%a8/
Imagine living in a place like this #perfectliving #naturalliving #donegal #calm #peaceful #peaceofmind #mentalhealth
Good initiative by @virginwines to support #growwell #charity for #mentalhealth see full story on @worlditineraries