Lively Los Angeles-based California Feetwarmers raised its audience aloft on a wave of musical nostalgia so enthusiastically at the Balor Theatre in Ballybofey in Donegal recently that the concert ended with group members leading everyone around the intimate hall in a spirited bout of dancing.

Though formed just three years, the seven skilled musicians are familiar with each other’s style from playing with other bands together in the LA area, a fact more than obvious from the complex yet harmonious layers of sound emanating from an impressive mix of instrumentation including trumpet, trombone, clarinet, banjo, side drum, accordion, guitar, and even washboard.

Playing delightful melodies, the group nimbly swung from hot jazz to ragtime to Western swing, most of the songs dating from the 1920s and ‘30s, the era of prohibition in the United States. Opening the set with ‘Shake It And Break It,’ a showpiece by American saxophonist, Sydney Bechet, the two-hour, no-break show spanned Tin Pan Alley classics as ‘Shine On, Harvest Moon’ and ‘On Moonlight Bay,’ sung Barbershop style, to original compositions by group members, including ‘Third Street Float’ by trumpet and accordionist Charles De Castro and the lively barn-dance like tune, ‘Wooden Nickel’ by Patrick Morrison whose nimble fingers caressed the banjo effortlessly with able backing from guitar and tuba. 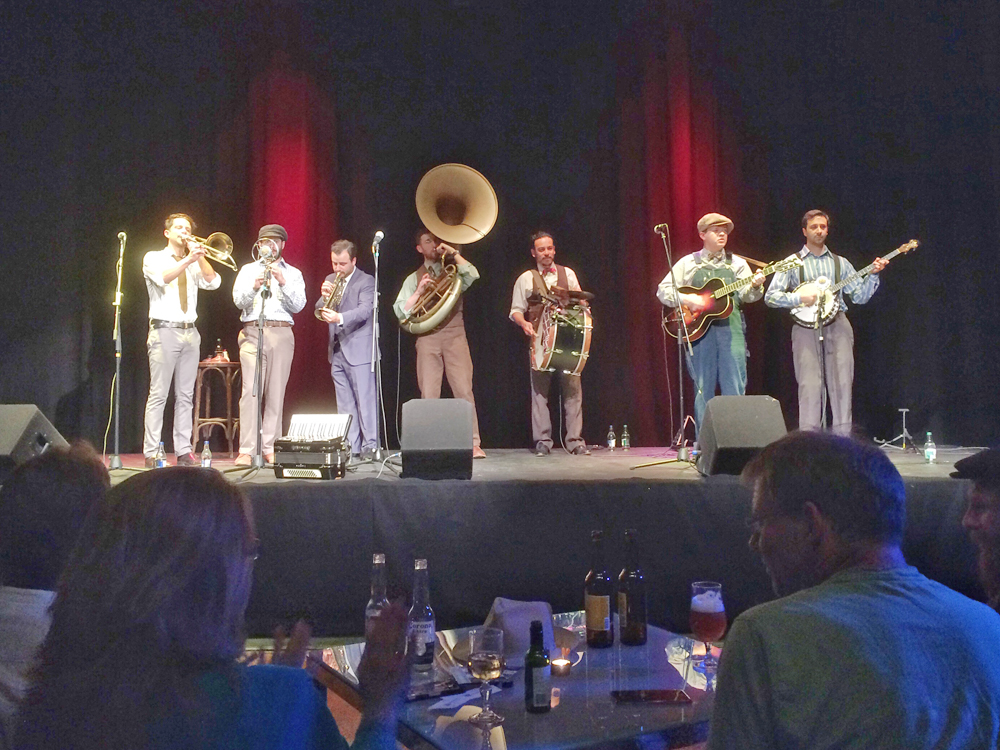 The sheer diversity of songs and tunes, many of which are featured on their latest CD ‘Silver Seas,’ reflected the group’s musical versatility, ranging from the sad lament, ‘Darling Nelly Gray,’ a popular 19th-century popular song composed by Benjamin Hanby about an African-American male slave in Kentucky mourning the loss of his sweetheart who has been taken away by slave-owners, featuring a wonderful clarinet solo, to the kick-off-your-shoes standard ‘At The Jazz Band Ball,’ a 1917 instrumental recorded by the Original Dixieland Jazz Band and ‘Looking Good But Feeling Bad’ by Fats Waller. Justin Rubenstein’s soulful rendition of ‘Tain’t No Use,’ recorded by Benny Goodman, featured a haunting clarinet backing and an intricate banjo solo.

Overall, the intertwining of so many instruments created multi-faceted melodies that lifted one’s spirits and took one on a journey back to the days of the Charleston, flappers, ragtime, gangsters and speakeasies.

The smooth harmonies of ‘The Breeze That Brought Me Home’ and ‘Sleepy Time Down South,’ a signature song of Louis Armstrong, created for me images of balmy, cicada-filled evenings swinging on my rocking chair on my porch in rural Pleasant Valley, Missouri.

Even the diverse attire of band members offered insights into their creative and fun-loving natures, ranging from Juan Carlos Reynoso in denim dungarees, peaked cloth cap and an incongruous grey bow-tie on guitar to Dominque ‘Chief’ Rodriquez in bright red tie and waistcoat on bass drum. A comical moment ensued when a tin basin had to be brought on stage to accommodate the blue-suited Castro who wasn’t tall enough reach the microphone for a solo accordion number.

Light-hearted banter, a talented seven-member band, nostalgic music from a bygone era and a bit of dancing – who could ask for more. The Donegal concert was the final one by the California Feetwarmers on its Irish tour before travelling to England to play.