From visiting Guggenheim exhibits and an intriguing witches museum to savoring fine food and music concerts, there’s no shortage of things to enjoy in the Basque region around Bilbao. Here are a few tips.

Hard to believe Bilbao was a polluted, heavy industrialized city over two decades ago under Spanish leader Francisco Franco, but a civic revival has revitalized this coastal city, with the Guggenheim Museum built on a former industrial wasteland being the cherry on the cultural cake.

Cost of opening the museum is estimated at around 100 million euro but officials say they have more than covered this financial outlay adding that the international prestige of having such a famed institution has been invaluable. Designed by American architect Frank Gehry, the three-level, 20-gallery museum is a huge spectacular sculpture-like structure with gleaming titanium tiles covering most of the building like giant herring scales, reflecting the designer’s childhood fascination with fish. The highest part, the 45-meter high atrium, is crowned by a large skylight shaped like a metal flower.

‘Snake’ and ‘The Matter of Time’ – both works by artist Richard Serra – occupy the museum’s largest gallery. Encouraging viewers to experience sculpture from multiple perspectives, these tall, tilted, spiral ribbons of hot-rolled steel enable visitors to walk in, around and through them, thus accentuating a sense of motion and instability.

In contrast, an exhibition by Andy Warhol entitled ‘Shadows’ that continues until October consists of 102 colorful silkscreened canvas panels painted and streaked with a sponge mop by the artist when he was 50. The ‘shadows’ alternate between positive and negative imprints along the wall of the gallery. The museum also hosts an exhibition by French-American Louise Bourgeois entitled ‘Cells,’ an arrangement of objects, clothes, furniture, and sculptures to create emotionally charged theatrical sets reflecting psychoanalytic and feminist themes.

For insights into the history and culture of the Basque people, a walk through the old town to the Euskal Museum housed in a 17th century building, a former Jesuit school, is well worthwhile. Opened in 1921, it benefited from the city’s 1980s revitalization and features comprehensive exhibits embracing fishing, sailing, the iron and weapons industries and traditional trades and crafts. A mysterious statue stands in the entrance cloister – the Mikeldi Idol, a powerful pre-Christian symbolic figure, its origins dating from the Iron Age. 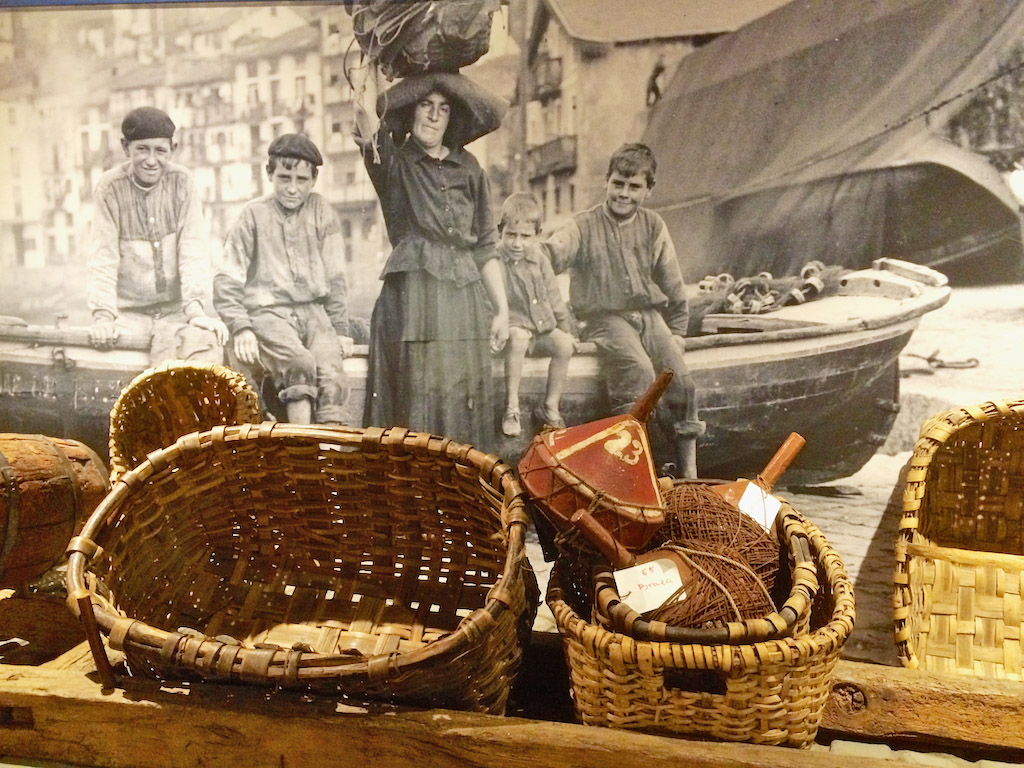 One of the attractions of Bilbao is its many quaint bars, with more than 20 alone in and around the neoclassical style Plaza Nueva. Many serve an impressive array of excellent Rioja wines such as Muga, Roda and Marques de Riscal and delicious pintxos, slices of bread with assorted fillings of tasty meats, veg and fish.

Café Bar Bilbao serves a wonderful poached cod on baked pepper and a coffee cup of ‘caldo,’ a healthy broth with croutons. Bar Basque boasts an ornate art nouveau exterior and interior, including an intricate brass snake curling sensuously around the bar’s main wooden pillar. Bartender Aitor pours a potent vermouth and a wonderful gin using the Galician aromatic variety ‘Nordes.’ Pop into Café Iruna for a glass of the slightly sparkling txakoli white wine made from the hondarribi zuri grape and some traditional idiazabal cheese from latxa sheep milk. The cafe dates back to 1903 and is located opposite the beautiful Jardines de Albia. Live entertainment, often flamenco dancing, also takes place here. Ask for a ‘gilda’ and learn how this particular anchovy snack is linked to former actress and sex symbol Rita Hayworth.

One of my favorites is El Figon, directly across from Hotel Lopez de Haro, where three friendly female bartenders, Laura, Blanca and Angie, serve a wonderful selection of food and drinks in a comfy, convivial atmosphere.

For live music and theatre, there’s probably no better venue than the lively Kafe Antzokia. Located inside a former theater, now a cultural center, it hosts both music and drama performances, with performances ranging from hard rock to traditional folk – we enjoyed a lively performance by Sven Hammond and his soul band. The Euskalduna Concert Hall at the Convention Center is also a popular cultural venue. Next month features an Elvis Presley tribute show and also Bertín Osborne, a well-known Spanish singer. Every year, the center hosts a marathon ‘Musika-Música’ classical musical festival over several days with more than 70 concerts and 500 artists in different halls, plus workshops for children and adults. One auditorium alone hosts more than 2,200 people.

For sports enthusiasts, the Bilbao metro goes straight to the beaches along the Cantabrian Sea and the city’s main river has been cleaned, with swimming and boating competitions taking place there. A hilly region lies beyond Bilbao has been designed as a green belt, ‘Ribera Park,’ consisting of around 110 kilometers of hiking trails.

Activities in the Basque country should not be restricted only to Bilbao as there are other interesting places outside the city, including the village of Zugarramurdi, less than two hours away. Around 400 years ago, ‘witch fever’ swept this region and scores of people, young and old, were either burned at the stake or imprisoned here in one of the largest witch trials in Europe – 7,000 cases altogether.  Embracing its pagan heritage and in tribute to these innocent people, the village leaders established the ‘Museo de las Brujas’ (Museum of Witches) nine years ago in a former hospital. A comprehensive series of displays on two-floors explains what exactly happened back then, with artifacts that include torture instruments, ‘floating’ dresses, cauldrons and goats heads. There are also displays exploring the role of female herbalists, which was then most often associated with witchcraft, as well as a short explanatory film. 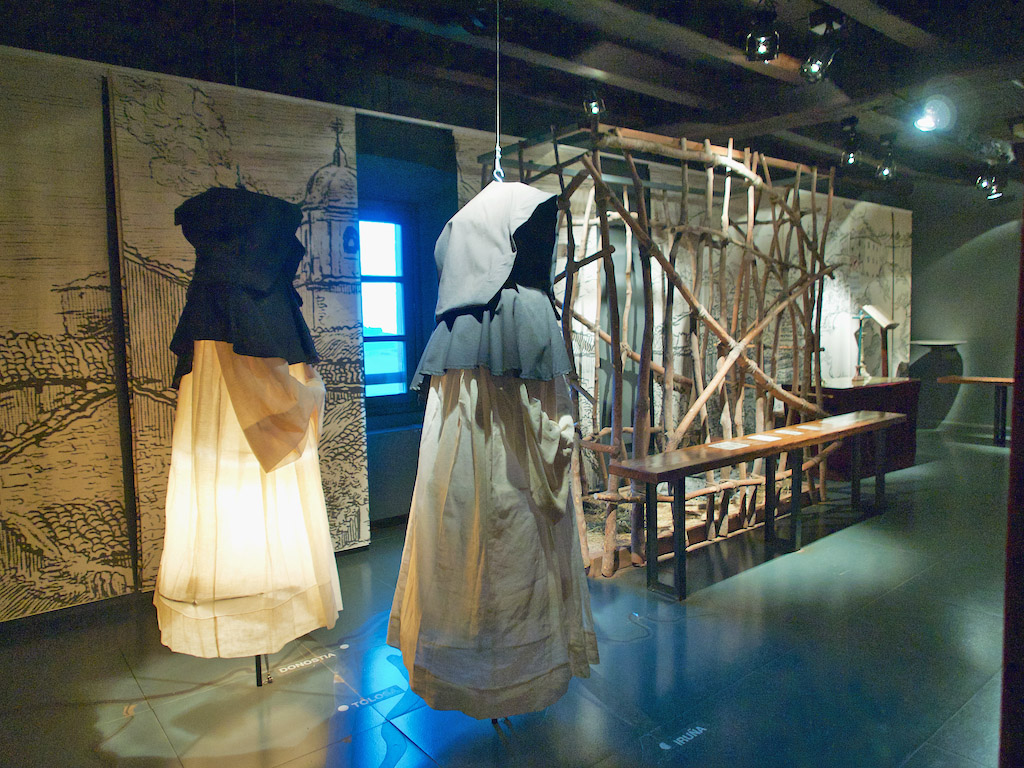 If fascinated by labyrinths, then take a 30-minute drive from Bilbao to Amalurra (‘ama lurra’ means ‘mother earth’) to a hotel of the same name, which features a restaurant, outdoor swimming pool, spa and sauna. Interestingly, the complex was established by people from diverse backgrounds who formed a self-supporting community and who host a series of activities all year including meditation, yoga and music and dance classes in an ornate cultural center they built. On the grounds, they have also carefully constructed a labyrinth to precisely harness the natural energies from the Earth.

A one-hour drive eastwards along the coast from Bilbao is San Sebastián, known for the high quality of its food. A visit here must therefore include a gastronomy tour, which often lasts two or more hours and encompasses many of the quaint bars and restaurants within its narrow, winding Old Town streets.

Our tour was hosted by San Sebastian Food and by the end of it we had tasted pintxos ranging from the simple pepper and smoked salmon and skewers of prawns, bacon and tomatoes to the more complex – scallops with almonds, olive oil, coffee vinaigrette, seaweed and mushrooms with potato foam and poached egg, not to mention a variety of wines and ciders. Highlight of the evening was the ‘order-off-the-blackboard-style ‘La Cuchara de San Telmo’ whose impressive menu included suckling pig with chimichuri and apple sauce, veal cheeks with chickpeas and fois gras with quince sauce.

Having such a reputation for its food, it should come as little surprise that the town has a long history of ‘gastronomy societies,’ now numbering thousands, where members meet for lunch or dinner in a community center complete with kitchen equipment. Not only do they make delicious food and eat communally, they also organize cultural activities, including the formation of traditional tamborrada drummer bands, which constitute the musical backbone of San Sebastián Day festivities.

Showcasing such societies, one such evening at Vasconia Gastronomia Elkartea was hosted as part of the San Sebastián European Center of Culture 2016 programme. It turned out to be a feast of Italian-Basque inspired dishes including a mousse of potato with dried pimentos, sausage, chives and paprika, pork with raisins and pine nuts, lemon confit and peel served with courgette salad, apple and mint. If you’re invited to such a delectable gathering, don’t hesitate to go.

One thought on “Basque country: a region of abundant vacation delights”