Legendary ‘Camelot’ has been claimed by England, Wales and France but few places can stir the imagination more than Chateau de Pierrefonds the atmospheric central location for the popular BBC series, ‘Merlin.’ 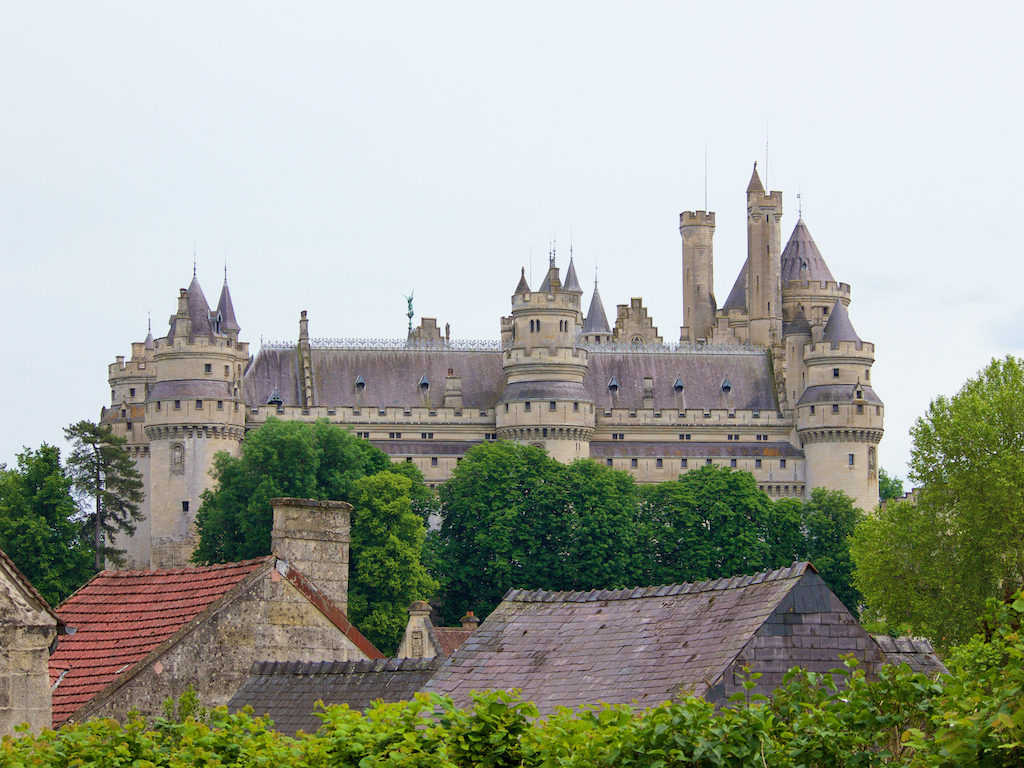 Located a two-hour drive north-east of Paris, and originally built by Duke Louis of Orleans in the 14th century, this impressive castle-like structure became the setting for the adventures of the famous magician and King Arthur and the fabled ‘Knights of the Round Table.’ So popular was the television series, a ‘Missing Merlin’ twitter has attracted more than 7,000 followers, all wanting the five-season series to be extended.

While the original castle was destroyed under the order of King Louis XII, it was bought by Napoleon I in 1810 and its romantic appearance attracted much attention from visitors. Emperor Napoleon III wanted to turn it into an imperial residence and architect, Eugene Viollet-le-Duc – and later his son-in-law, Mauric Ouradou – was placed in charge of the restoration project. Rather than build it exactly as it was in earlier centuries – a difficult task as there was little information as to what it had been like originally – they designed it with elements from various historic castles they liked throughout France. 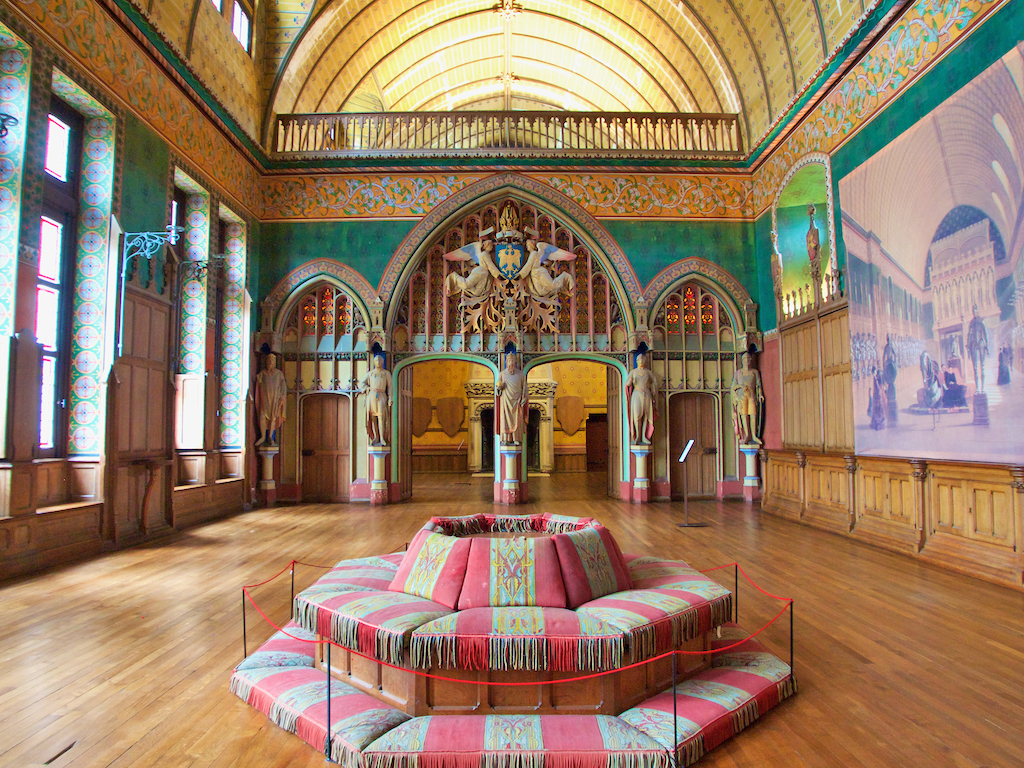 Located above the quaint, lake-side village of Pierrefonds, the chateau commands panoramic views over the surrounding gently-rolling landscape and tranquil forest of Compiegne. Entered through a drawbridge, the first interior feature is a circular-shaped, cobblestone courtyard that immediately beckons one back to a bygone age of adventure and chivalry. The roof of a portico – a stone-floored outside corridor that runs around one side of the courtyard – is skillfully decorated with fantastic creatures and tradesmen of the era at work such as carpenters and stonemasons. Guests can amble throughout the chateau’s multiple rooms, many featuring huge fireplaces, some with decorative mantelpieces; furnishings such as chairs, coats of arms, paintings and tables; and sculptures and statues, including one of Louis I of Orleans seated on a horse. Intricate friezes, both in stone and wood, depict motifs from the plant and animal kingdom.

Art nouveau aficionados can admire several wall paintings and wood-carvings Viollet-le-Duc created in several rooms, setting the initial tone for an artistic style that would only become popular about one hundred years later. 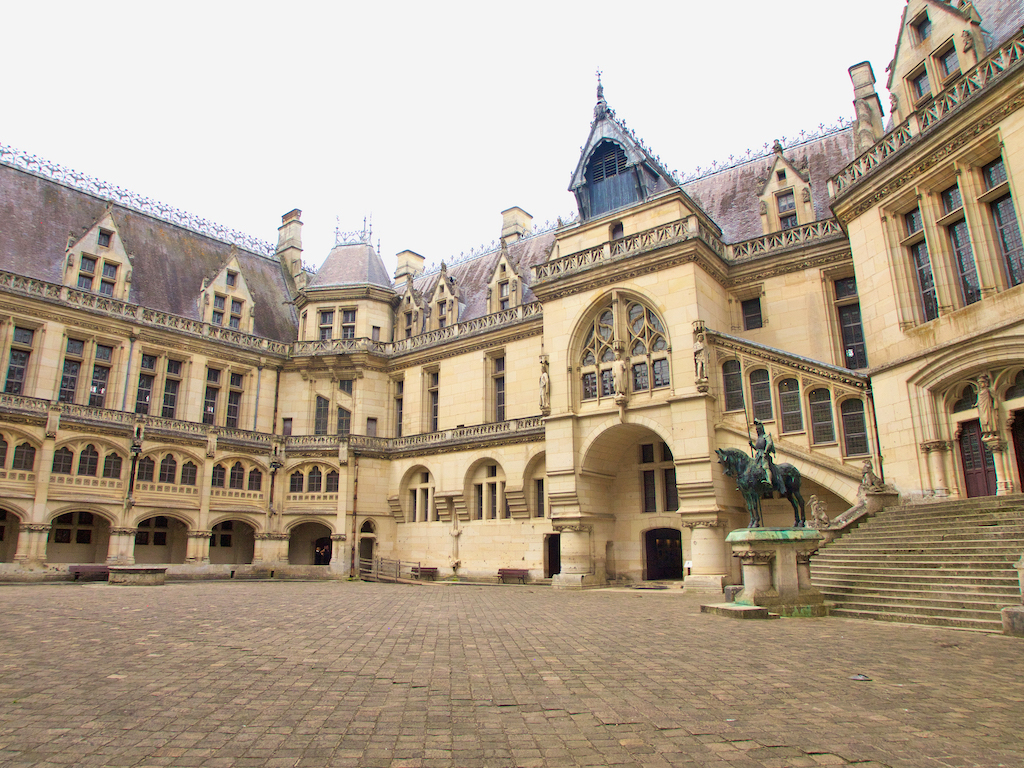 Viollet-le-Duc himself, the master architect, who was involved in other renovation projects including Notre Dame Cathedral, the Cite de Carcassonne and Coucy castle, makes an appearance in pilgrim’s clothing on the chapel gate. In one room is a miniature model of the castle created for the 1878 World’s Fair to help attract visitors to the real McCoy while in another is an exhibition of funerary sculptures commissioned by King Louis Philippe. Fragments of statues and other items found during restoration are also on display and a short video provides succinct historical background.

Chateau de Pierrefonds is under the control of the Center of National Monuments, a state organisation that protects and maintains more than 100 monuments and cultural sites throughout France including Mont-Saint Michel and the Arc de Triomphe. Strangely, even though it has helped attract many visitors to the site, there is no information either inside the castle or at the local tourism office about the filming of ‘Merlin.’

Avid followers of the well-produced television series can, however, enjoy recollection of various scenes and episodes, shot both inside and outside the castle.