Guided walks are an easy and convenient way to learn about a new destination at the outset of a holiday, particularly so in a city such as Paris. Fortunately, companies there offer a full menu of options, depending on your specific interest, including art, military history, fashion and literature.

With the latter upmost in mind, I promptly found myself standing in front of experienced guide, Brad Newfield, on one of the most important literary streets in the City of Light – Boulevard du Montparnasse.

Los Angeles-born, living in Paris since early 1994 and a guide for Paris Walks since 1998, dry-humored, well-informed Brad, is one of eight guides working for this company, and now leads 30 different tours.

The city’s Left Bank is a suitable place for lovers of literature, being the center for avant-garde artists of all kinds, especially in the 1920-30s. Gertrude Stein – one of four siblings, all art collectors – is noted for applying the term ‘Lost Generation’ to writers (it was first coined for World War One veterans). And, indicating the respect with which writers, indeed all intellectuals, were accorded in France then, was also quoted saying, “writers are as important as plumbers.”

Our interesting walk with Brad began, appropriately enough, beside a statue of French novelist and playwright, Honoré de Balzac, standing in monk’s cape, erected in 1938. We then took a tour of different cafes, all boasting close ties to celebrity writers of the 1920s including Ernest Hemingway, D.H. Lawrence, Ezra Pound, Henry Miller, William Faulkner and F. Scott Fitzgerald, all of whom enjoyed ‘the opportunity to sin,’ away from Prohibition in the US, in a city where, according to Hemingway, dinner cost 18 cents and a year’s living expenses amounted to a thousand dollars.

Boulevard du Montparnasse encompasses the 6th, 14th and 15th arrondissements, the former being the home of book printing and publishing. It is also home to a former dance hall, now a restaurant, where the French version of the Argentian tango was in vogue and which warmly welcomed idiosyncratic individuals, including Spanish surrealist Salvador Dali who once arrived with a pair of panthers.

Brad’s walk ‘n talk is impressive insofar as it encompasses many literary eras and many nationalities, including Irish writers James Joyce and Samuel Beckett, a member of the French Resistance, Nobel prize winner and a scholar of the Romantic period, who died in Paris.

Granting his literary knowledge proper context, Brad also touches upon the lives of artists in other genres such as dancer Isadore Duncan, who died tragically aged 49 when her silk scarf got tangled in the rear hubcaps of her open car in Nice; Paul Gauguin, who had a pet monkey and parrot; and Italian Jewish painter and sculptor Amedeo Modigliani, whose studios were in this neighborhood.

Unlike Brad, Emmanuel, 38, a talented film-maker boasting an authentic Parisian birthright, started his tours with Localers within the last year. Emmanuel’s literary tour starts on Saint-Germain-des-Prés, outside the historic Café de Flore, a favorite watering-hole for writers, of yesteryear and today, before moving on to Les Deux Magots, a café frequented by Jean Paul Sartre and where Hemingway enjoyed a helping of beer and sardines.

He documents the era of the ‘Lost Generation’ of writers well including a visit to a hotel where Hemingway stayed in 1921 after his experiences during the Spanish Civil War and where he wrote ‘Farewell To Arms;’ as well as the hotel near the French Academy where Oscar Wilde died, and coincidently, where Argentinian writer, Jorge Luis Borges, a great admirer of Wilde, lived.

Like Brad, Emmanuel extends his talk beyond the 1920s writers to include other eras. As for example, a visit to what is considered the oldest restaurant in Paris in continuous operation, opened in 1686 and where coffee was popularized. This is where French Enlightenment writer Voltaire and Founding Father of the United States, Benjamin Franklin, found solace and convivial company. 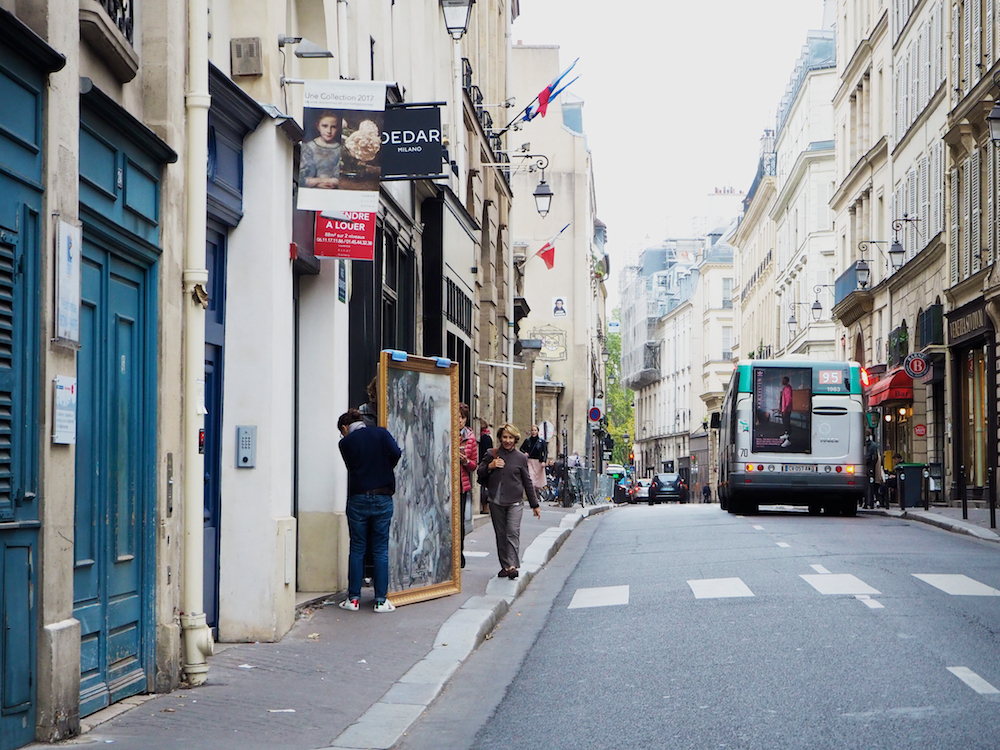 Balzac’s house is also on the itinerary as are traditional publishers and bookstores such as Shakespeare & Company, founded in 1951 by American George Whitman in tribute to Sylvia Beach, a fellow American who opened such a bookstore in 1919, and who named his daughter after his literary heroine, Silvia, who now manages the bookstore, as well as Groupe Flammarion, the fourth-largest publishing group in France, comprising many units, founded in 1876 by Ernest Flammarion. 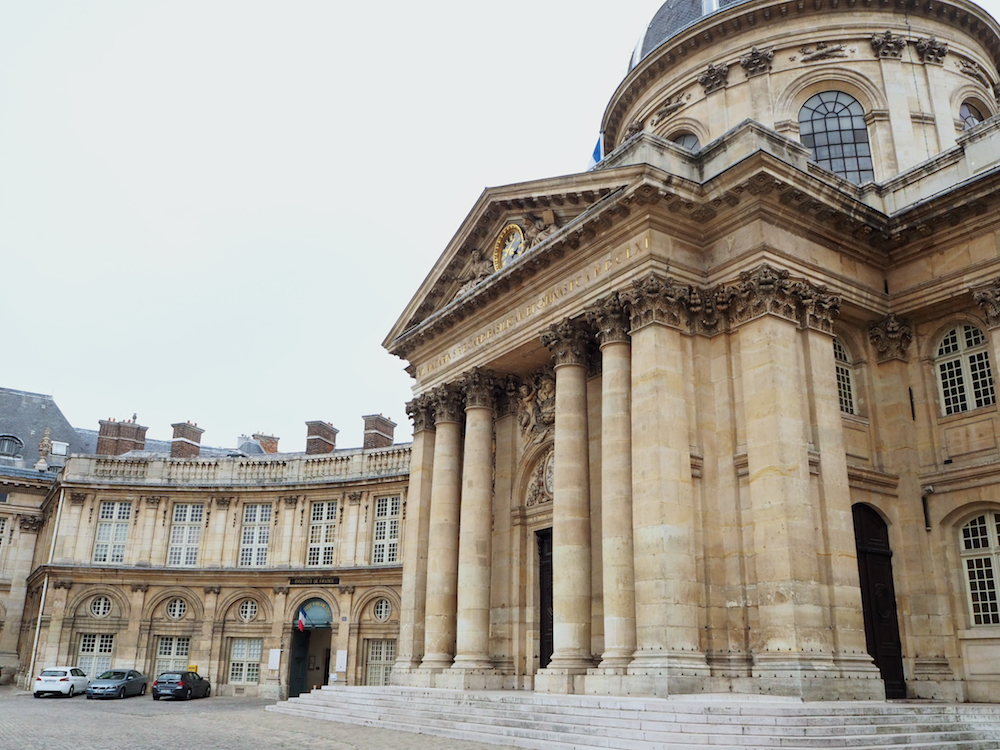 An added attraction to this walking tour is that we enjoyed a delicious silky hot chocolate (guests on the tour receive a complimentary, non- alcoholic drink of their choice) at Le Relais Odéon where we learned about Emmanuel’s vast experience in documentary film-making. 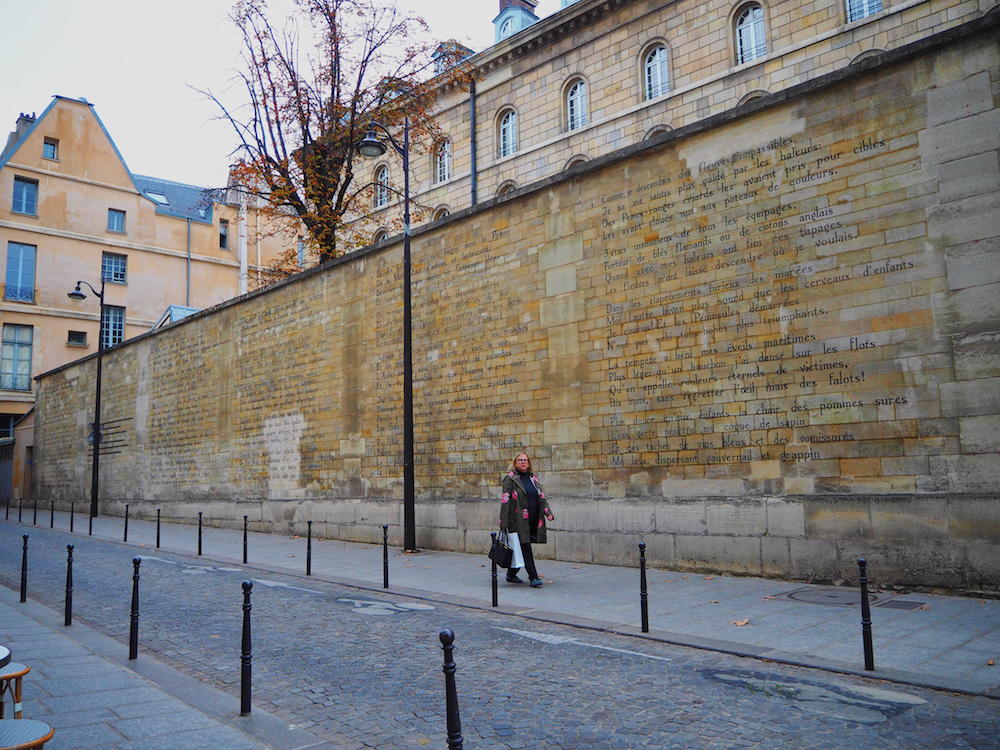 We also a visited the ornate library of L’ Académie Française and ended the tour with the story of the mysterious poem, ‘La Bateau Ivre’ (The Drunken Boat), by 15-year-old prodigy poet, Arthur Rimbaud, reproduced on a wall in the shadow of the imposing Saint Sulpice.

When your Paris address is the Parisian Suite at Hotel Elysia, one can rightly sing #lavieenrose #luxurylife #luxurytravel @hotelelysia #paris
This newly opened #fivestarhotel in the #champselysees neighborhood is a hidden treausure #luxurytravel #paris #travelagain @hotelelysia
Iconic landmarks can easily be admired from the #rooftop of @kimptonsthonore in #paris #luxurytravel #whattodoinparis
What a jewel of #artnouveau this newly opened hotel in #paris #kimptonsthonore #luxurytravel
Lost in the mist but still visible, #eiffeltower watches over us at @kimptonsthonore #luxurylife #luxurytravel #paris
Good bye @sofitelparisfaubourg, we enjoyed the sophisticated setting with its air of elegance during two rainy days in #paris #luxurylifestyle #luxurytravel
A fashion show welcomes guests at @sofitelparisfaubourg #traveladdict #luxurytravel #travelagain #paris
From the #frenchclassic plate of #escargots to delicious #profiteroles a #dinner @chezandre.paris was just the treat on my #birthday #travel #finedining #luxurytravel
Sunset over #sfantugheorghedeltadunarii from @greenvillageresort #luxurylifestyle #danubedeltaromania #danubedelta
Tip for Life - If you can’t bring water to the horse, bring the horse to water. @greenvillageresort #nature #visitromania
Swaying willow trees, a reed-bordered lily pond and bright red blossoms of sumac trees are some of Nature’s delights that greeted us upon arrival at our tranquil lodgings in Green Village resort in the #danubedeltaromania @greenvillageresort #travelagain #luxurytravel #visitromania
Located on the edge of the Carpathians and selected as a former #European Capital of #Culture, this charming city has many attractions to offer, both culinary and cultural. But do you know why we call it 'city of a thousand eyes?' See our destination story on the site. #luxurytravel @enterprise_romania @ramada.sibiu @visittransylvania.ro @visittransylvania_ro @govisittransylvania @govisittransylvania #travelagain #gourmetfood
Hidden treasures of charming #boutiquehotel @schusterboardinghouse in #Brasov, one #historichouse you can now enjoy when visiting the #transylvanian city #luxuryhomes #traveltoromania #visitromania @epic.visits
In discovering the hidden gems of beautiful #Transylvania such as #Rupeacastle one needs a smooth, efficient car. For me, on a recent 1,000 kilometer roadtrip, that was #toyotahybrid from @enterprise_romania #visitromania #visittransylvania #luxurytravel
Still dreaming of staying in a luxury #hauntedcastle in #Ireland? This might be the one: Ballygally Castle overlooks northern Irish coast and you can see the full story about our stay there on our site @ballygally_castle_official #luxurytravel #visitnorthernireland #irishcastles
Hard to find a more personalised service in such a blissful setting as the one at Anna Charisma Chalet in #transyilvania @anna_charisma_chalet #luxurytravel #visitromania @visittransylvania.ro @visitromania @epic.visits
Meeting Vlad Tepes the Impaler by accident on the street in #Sighisoara #Transylvania during the #MedievalFestival this weekend
Relaxing sunny Sunday afternoon in Brasov Transylvania @schusterboardinghouse amid elegant furnishings and soft piano music #luxurytravel #luxuryholidays