Imagine being in a cozy, dimly-lit nightclub in Soho or Greenwich Village listening to soft, soothing jazz classics and lively, intricate melodies wafting to you across the room.

Now instead of the Big Apple, imagine you’re in a quiet coastal Irish town where drink prices and concert tickets are a mere fraction of those in New York.

Welcome to Falcarragh, in northwest Donegal, a region known as the Gaeltacht, a place perceptive people consider is the heart and soul of Ireland, a place plum on the ‘Wild Atlantic Way’ that boasts the most awe-inspiring landscapes on the entire face of the Emerald Isle.

Due to the admirable efforts of twin talented brothers, Conor and Micheal Murray, the music that inspired black civil rights movements in America in the 1960s and was considered the music of freedom for those living under the yoke of Communism in Romania and other Eastern bloc countries before 1989, is now sweeping across the rim of Ireland’s most northerly and remote, rural county.

This complex musical genre, characterized by swing and blue notes, in call and response vocals, polyrhythms and improvisations, with roots in West Africa and influences from African-American traditions such as blues and ragtime, as well as European military band, is alive and well at this weekend’s inaugural festival.

So get yourself along there today to one of the venues and enjoy an authentic taste of history right on your own doorstep, as part of Falcarragh Winter Jazz Festival.

If last night’s performances were anything to go by, you’re in for a rare treat. European jazz icon Jesse Van Ruller, considered one of the world’s finest guitarists, and MOBO-nominated Irish drummer David Lyttle, both displayed their ample skills at The Gweedore Bar, after which there was an intimate, up-close performance by the Falcarragh-born, Glasgow-based, award-winning brothers, playing sax and double bass, accompanied by other guests at The Shamrock Bar.

The sublime sounds reminded me of my halcyon days as a police reporter many years ago in downtown Kansas City, Missouri – described as a ‘cradle of jazz.’

Covering heinous murders for the daily newspaper, including those of serial killer Bob Burdello, until well after midnight meant sleep wasn’t always a close friend. So I’d meander down to the old haunting grounds of jazz legends such as Count Basie, Bennie Moten, Andy Kirk, Harlan Leonard, George E. Lee, William and Jay McShann, at the intersection of 18th and Vine, a neighborhood many middle-class suburbanites considered ‘too dangerous to walk alone.’

Here I’d often be the only white man among an all-black gathering listening to some of the greats, many of whom had – just like me – finished a long day’s work and had a thick thirst that needed tending right quick. These memorable musical sessions had to be heard to be believed. And kept me entertained until sunrise. And sometimes, well afterwards.

So, I’ll be in Falcarragh later today, reliving some more of those old, fading memories. 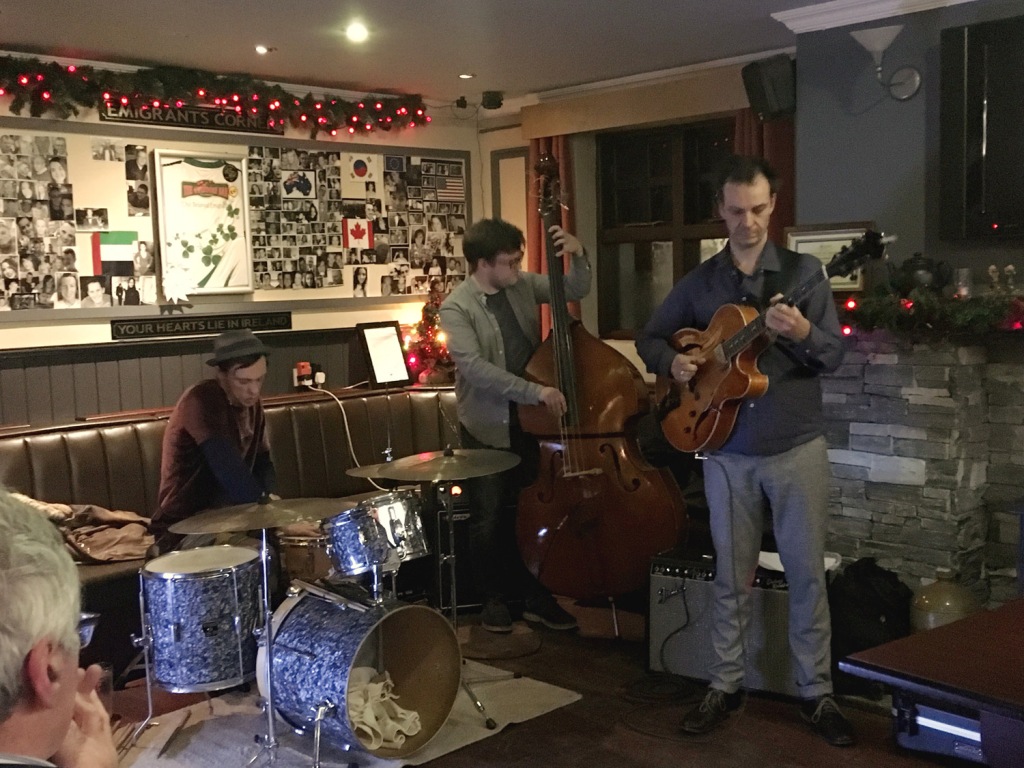 Marvelling at Lyttle’s magical talents in composing a special musical treat ‘as Gaeilge’ with local singers in the native Irish language – a unique, not-to-be-missed occasion entitled ‘Tapes and Drums’ at An tSean Bheairic Visitor Centre on the edge of town from 1- 2pm today (Saturday).

Afterwards, a two-hour concert from 2.45 to 4.45pm featuring solo guitarist Joseph Leighton, followed by the talented twins hosting ‘Reflections On The Great American Songbook,’ a nostalgic journey back to the early heyday of jazz, at The Shamrock from 5pm to 7 pm. 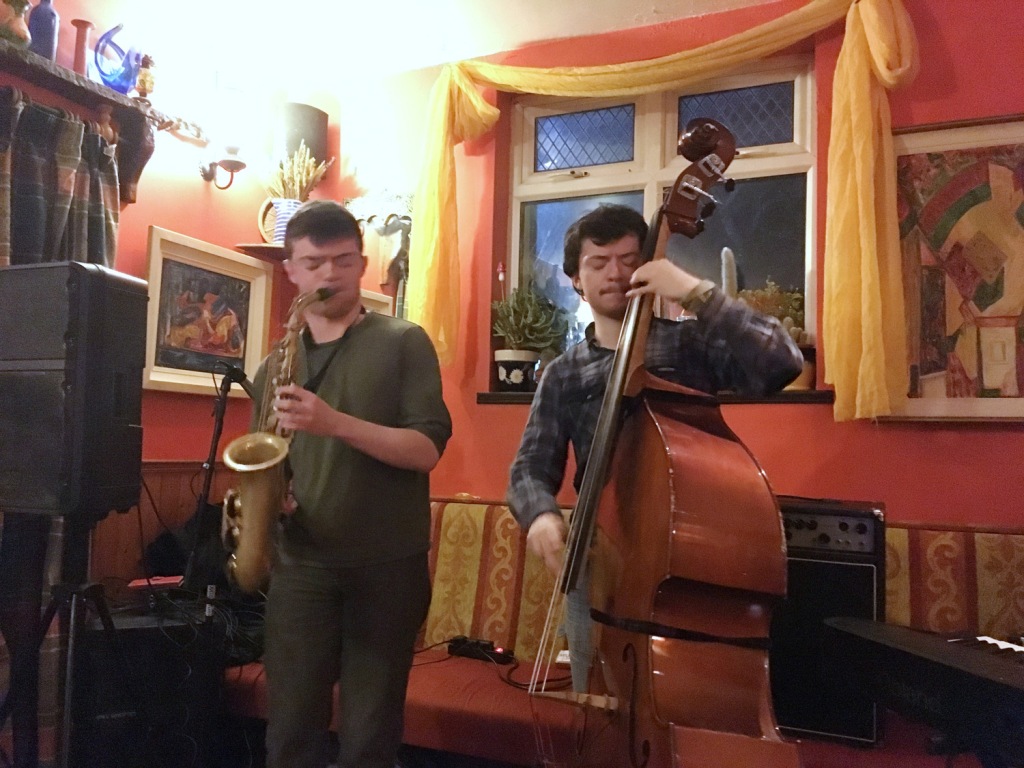 And then what is sure to be a terrific finale – the David Lyttle Quartet from 9 to 11pm at the same comfy ‘South of the Border’ venue, though expect the craic to be mighty and the finishing hour to be extended indefinitely.

Michael, a jazz lover originally from north Down, travelled all the way up from Dublin to enjoy the festival. “It’s terrific, and everyone here has been so friendly, and it’s beautiful countryside too,” he said. “Sometimes it’s best to come to a new festival like this than one that is already established. You can easily find a comfortable seat close to the musicians. Try going to the Cork Jazz Festival, you have to book more than a year in advance just to get any remotely decent accommodation. My congratulations and thank you to the two brothers who organised this event.”

Interestingly, for seekers of esoteric knowledge and aficionados of pub quizzes, the origin of the word ‘jazz’ is related to ‘jasm,’ a slang term dating back to 1860 meaning ‘pep, energy.’ The earliest written record of the word is in a 1912 article in The Los Angeles Times in which a minor-league baseball pitcher described a throw which he called a jazz ball, ‘because it wobbles and you simply can’t do anything with it.’ A phrase that captures the essence of this spontaneous, uplifting, free-flowing and often surprising style of music.

See you in Falcarragh later today.