So wide are the corridors of Liverpool’s Titanic Hotel, cars could be driven along them without fear of hitting the walls either side.

As for the 153 rooms, ‘spacious’ hardly does justice to their impressive size, with none are smaller than 56 square meters. Ours, 310, comprised a step-up living room and high bare-brick vaulted ceiling with iron fasteners. With pale gray walls, it featured unframed photographs of ships and industrial scenes, a chocolate-colored settee and armchair, a simple work-desk and coffee and tea-making facilities. The bathroom consisted of a double sink, tub and a walk-in shower, with old posters on the walls from the White Star Line promoting cruises to New York from Liverpool. And lush, fluffy towels. 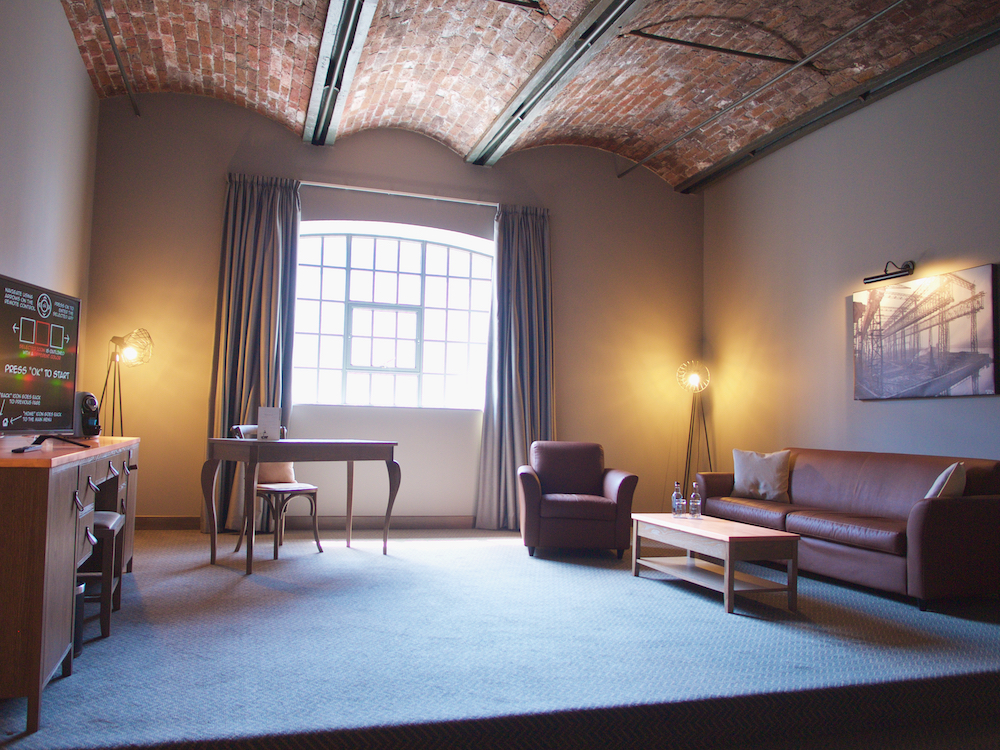 Views through a large central window included the gleaming waters of Stanley Dock and the gargantuan Tobacco Warehouse, made of 27 million bricks and at one time the largest brick-built building in the world. It is the site of the next phase of development, with construction of 538 innovative residential apartments, bars and stores already underway. An exterior wall mural of this northern English city’s favorite quartet – the ‘Fab Four’ Beatles – added a touch of vivid color to the overall scene. 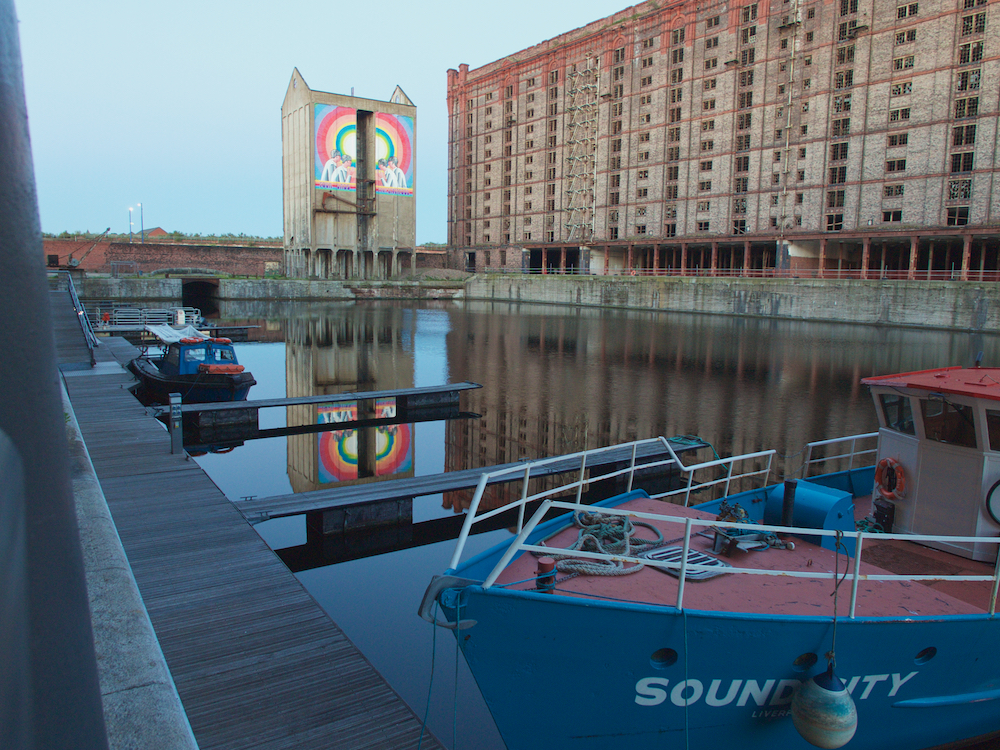 Located in the North Warehouse in the city’s old docklands at the mouth of the Mersey River, the Titanic Hotel is the first phase of an overall 36 million-pound redevelopment of Stanley Dock and a classic illustration of the kind of regeneration envisioned for the whole area. Built in 1846 and finished in 1854, the warehouse was damaged during World War II and had been derelict for years. The Rum Warehouse attached to the North Warehouse and built in the 1950’s, has become a major new conference, banqueting and exhibitions venue. Stanley Dock is one of six sites comprising Liverpool’s UNESCO World Heritage Maritime Mercantile City listing. 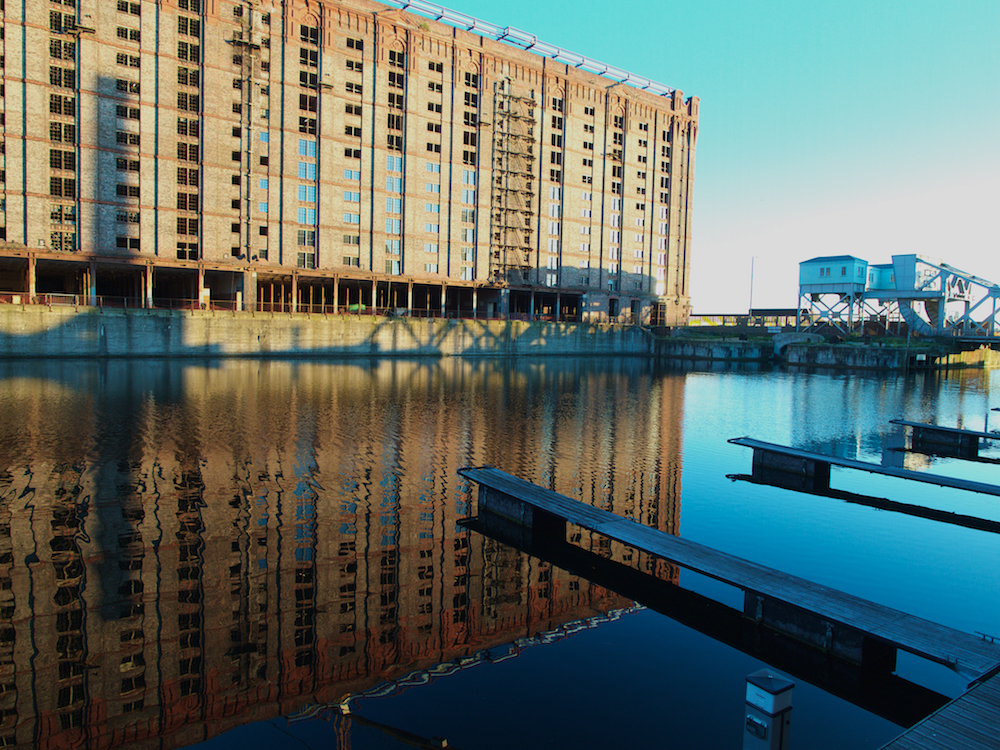 As one drives along the cobblestone street fronting the hotel, one can almost imagine the bustling sights and sounds of that golden era in Liverpool’s port history when thousands of barrels of rum and bales of tobacco were hauled here every day from ships arriving from exotic places in Africa, South America and the Caribbean. 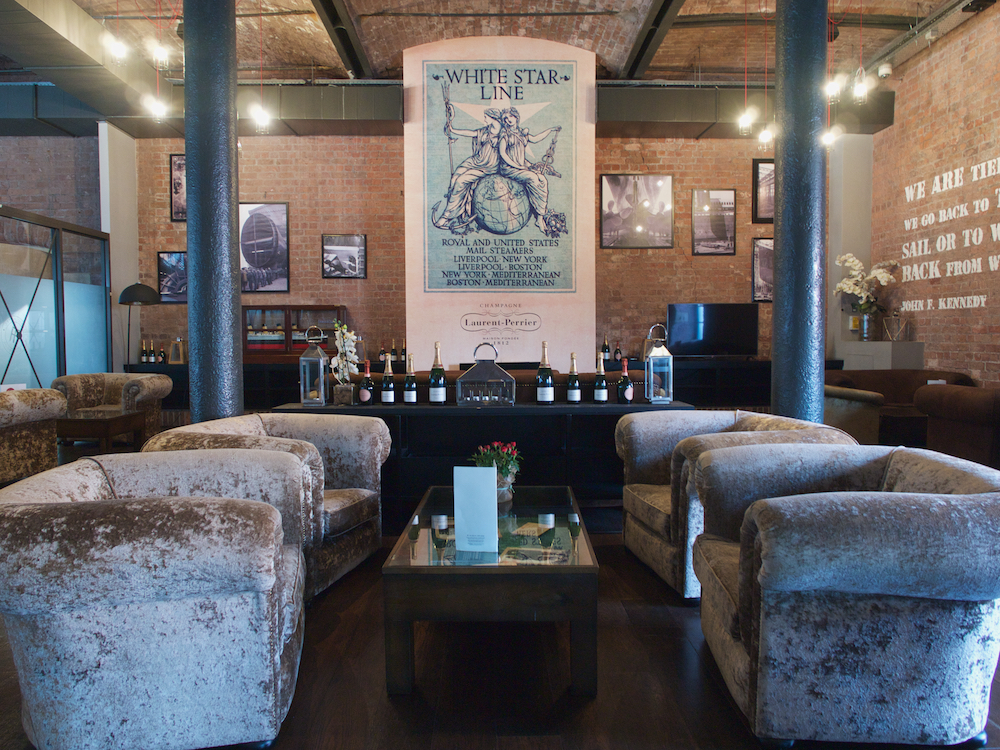 Inside, the lobby’s breadth and height is immense. Industrial in style, it features a soaring brick-ceiling with bare metal ventilation shafts, varnished broad plank floors and vertical iron pillars. Young staff in waistcoats move to and fro between the reception desk, a central chic bar and a terrace alongside the water. They include a buoyant and gregarious Irish-born Damien Daly who keeps guests – particularly children – happy as they wait for taxis to John Lennon Airport or the downtown shopping and museum districts. A large-scale model of a ship under glass is a nod to the popularity of The White Star cruise lines so popular throughout the 1900s that operated out of these docks and included the ill-fated RMS Titanic. 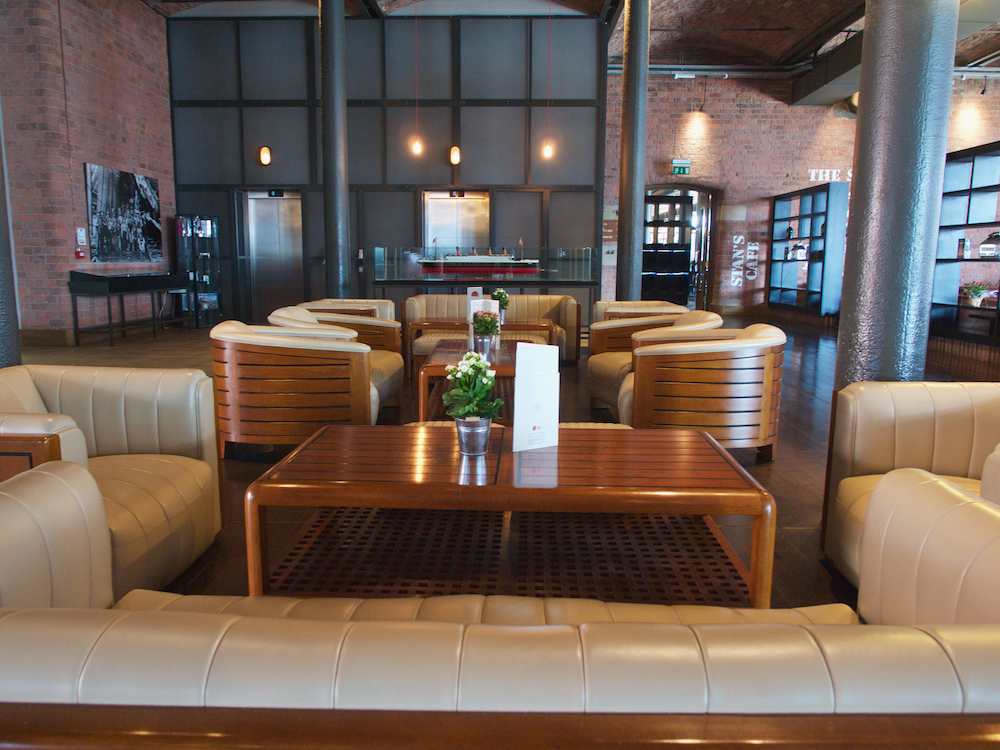 An events room off the lobby is highlighted by giant floor-to-ceiling black and white photos of cruise ships and dockland scenes. Next to it is an elegant relaxation room complete with leather armchairs, glass-topped coffee tables and assorted champagne bottles. The Rum Warehouse adjoining the hotel is a conference, banqueting and events area, with 1,400 square meters of exhibiting space and 1,560 seats over two levels.

Dining at the Titanic Hotel takes place mainly in Stanley’s Bar & Grill where breakfast, lunch and dinner are served under the direction of head chef Bradley Lean, either inside a cavernous elongated room or alfresco, on a narrow terrace facing the water. Walls of windows either side allow natural light to flood in, illuminating a central bar, hanging ceiling lamps, vertical iron pillars and a black-tiled floor. A creative decoration made from thick lengths of rope adorns the entrance wall.

It being a balmy June evening, we chose alfresco for our dining experience.

Designed as an international menu to appeal to a wide variety of guests, the menu is not short of gourmet starters, including duck rillettes with madeira sauce, dates served with thinly sliced brioche and slow-cooked pork with celeriac puree, charred leaks and sticky jus. 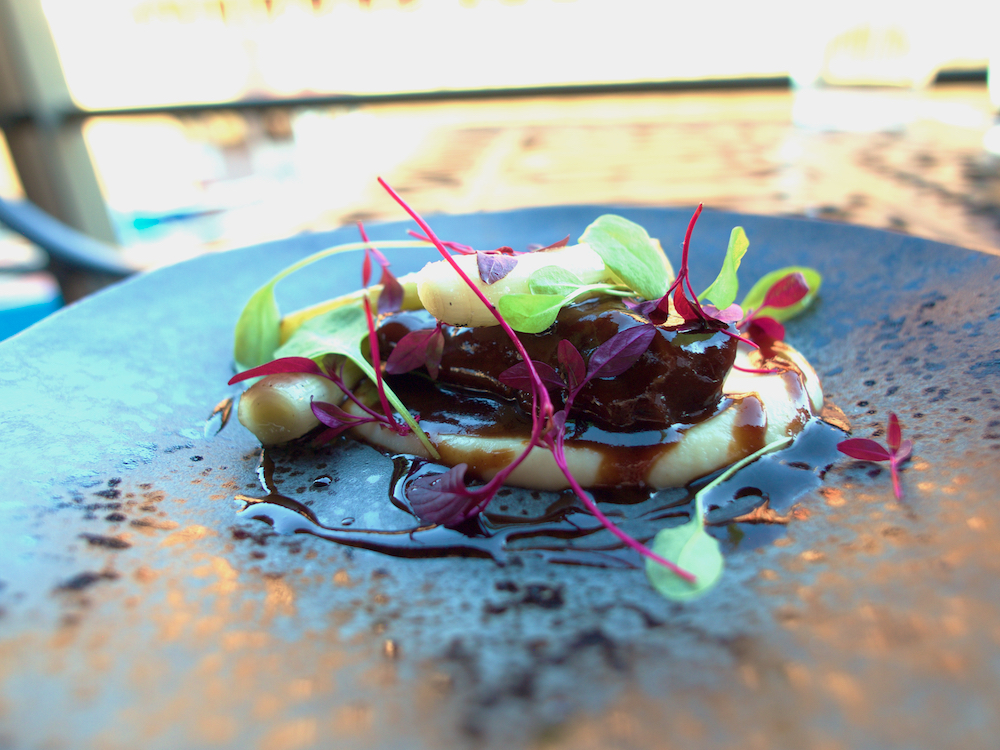 Taking prime space on the menu are two must-haves – the 28-day-aged rib-eye served with seared scallops or rum-glazed chicken-wings and, completing the feast, the wicked sticky-toffee pudding, salted-caramel and banana ice-cream.

Scouser (colloquial term for a Liverpool native) Dimitri Prassinos, manager and experienced drinks guide, added to our overall enjoyment, especially with his selection of a full-bodied Argentinian Malbec as our wine accompaniment. 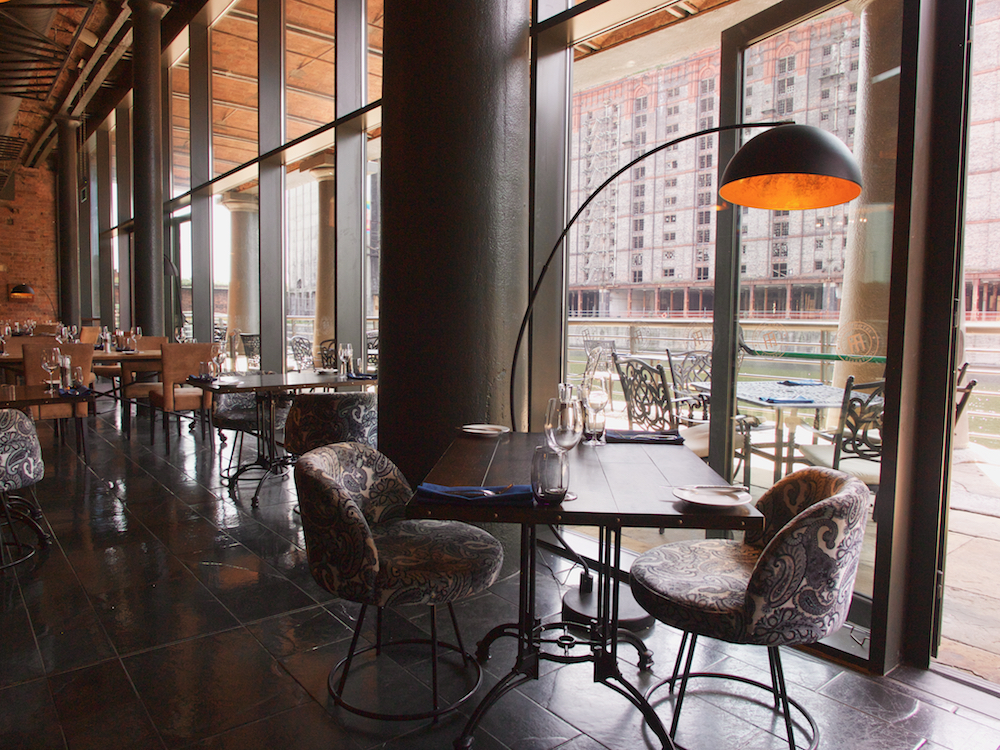 Snacks such as sandwiches and burgers can also be ordered in the Rum Bar in the lobby where 60 different varieties of the drink are available. Live music takes place here at weekends. Special afternoon teas are also offered in either Stanley’s or the Rum Bar.

While the Titanic Hotel stands about two miles from the Albert Dock and the city’s main cultural and recreational centers such as Liverpool One shopping complex and a series of museums, a taxi ride takes only ten minutes.