Photos and videos by Columbia Hillen

Friday evening’s concert, billed as ‘The Legend of Luke Kelly,’ took listeners on a nostalgic journey through the life of the renowned singer and musician who died in 1984 and who spent decades as a founding member of the ‘Dubliners,’ a highly-successful group who were worldwide ambassadors of Irish music during the folk revival of the 1960s and beyond. Kavanagh said his passion for Kelly’s music led him to learn to play the five-string long neck banjo and over the past 14 years, he has toured the show throughout Ireland, England, Switzerland, Germany and Australia. 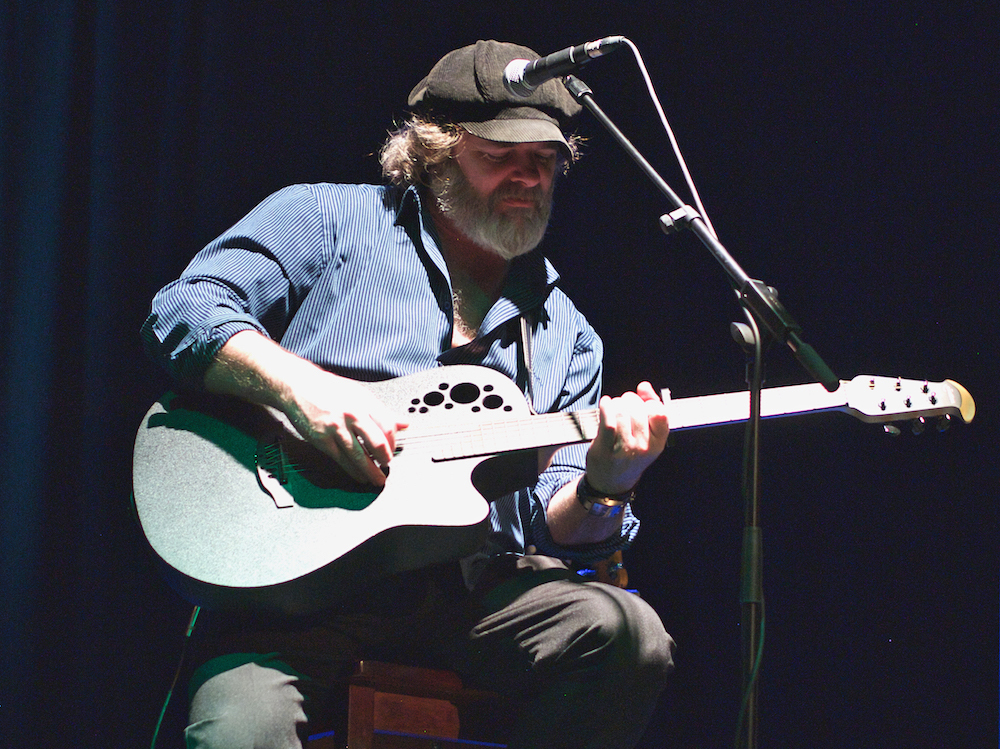 The evening’s musical menu, roving between come-all-ye, audience participatory, hand-clapping tunes to soft, winsome ballads, included many of the classic folk songs most closely associated with Kelly such as ‘Whisky In The Jar;’ 1970s hit, ‘Dublin in the Rare Ould Times;’ ‘Monto,’ an irreverent look at Dublin’s red-light district’ ‘The Wild Rover’ and Belfast song, ‘Black Velvet Band’ and the patriotic, ‘The Rising Of The Moon,’ about the failed 1798 Irish rebellion. His evocative version of the poetic ‘Song For Ireland,’ one of the last songs Kelly ever recorded, with brilliant accompaniment on both flute and uilleann pipe by Flynn, was met with tremendous applause from an enraptured audience.

Kavanagh also sang his version of ‘Raglan Road,’ a poem by writer Patrick Kavanagh which Kelly put to music after they’d both met by chance in in a Dublin pub where he was singing.

An interesting theme revealed at the Amharclann concert was Kelly’s enduring admiration for songwriters, Ewan MacColl, whom he met after going to England in 1958, and Scottish Australian singer-songwriter, Eric Bogle. Citing this fact, Kavanagh performed MacColl’s ‘Dirty Old Town,’ a love song set in working-class Salford in Lancashire, and Bogle’s popular anti-war anthem, ‘The Green Fields Of France.’

Describing his dry throat amusingly as ‘Ghandi’s sandal,’ the bearded Kavanagh, black cap on head, nevertheless sounded strong-voiced singing sea chanties such as ‘Fiddler’s Green,’ recorded by The Dubliners’ on their 1973 ‘Plain and Simple’ album and Brendan Behan’s rousing ‘The Auld Triangle,’ from Behan’s first play, ‘The Quare Fellow’ set in Mountjoy Prison.

Reflecting Kelly’s close relationship with former manager of ‘The Dubliners,’ Derry composer Phil Coulter, Kavanagh also performed three of the most well-known songs to emerge from that close collaboration: ‘The Town I Loved So Well,’ ‘Hand me Down My Bible,’ and the haunting, ‘Scorn Not His Simplicity,’ about Coulter’s son who had Down’s Syndrome.

Hilary Kavanagh’s crystal-clear voice added an attractive dimension to the evening, especially her gentle renditions of ‘Down By The Sally Gardens,’ based on a poem by William Butler Yeats and ‘Red Is The Rose,’ written by Tommy Makem.

Flynn, a skillful multi-instrumentalist, displayed his versatility on flute, uilleann pipe, tin whistle and fiddle throughout the concert, capped by his sweet solo ‘The Falcon’s Call,’ composed with Kavanagh, his musical finesse creating mind-images of soaring birds and the gentle-flapping of wings.

If you want to enjoy a lively Easter weekend of music along Ireland’s Wild Atlantic Way, head for the west Donegal coastal town of Bunbeg and look for the big orange tent.