For more than a century, the classically-designed, ornate Grand Opera House in downtown Belfast has served as a loyal cultural base for hundreds of thousands of people, both from Ireland and abroad.

And it continues to do so successfully today by hosting an impressive array of performances of all kinds, as illustrated by the program for the next month.

Any arts center that can boast staging in two successive weeks a musical based on a long-running, ghoulish TV series focusing on a haunted house (‘The Addams Family’) and another based on the whacky humor of the Monty Python comedic team on a search for The Holy Grail in ‘Spamalot’ deserves a lot of credit.

Not to mention future shows that include Oscar Wilde’s ‘The Importance of Being Earnest,’ Terence Rattigan’s ‘The Winslow Boy,’ as well as the stand-up, ‘You Must Be Joking,’ featuring four of northern Ireland’s leading comedians, the ever-endearing Jimmy Cricket, the first lady of Irish comedy May McFettridge, the irrepressible William Caulfield, and master storyteller Gene Fitzpatrick.

As for evenings of song, the Grand Opera House Belfast delivers a diverse menu over the coming months, with the ‘Atlantic Arc Orchestra’ that includes some of the world’s most respected traditional musicians, under the direction of Dónal Lunny; ‘The Björn Identity,’ Ireland’s greatest tribute to the world’s most famous super group ABBA; and a concert by the chart-topping, singer of blues, ballads, folk and country, Charlie Landsborough.

To experience some of the Opera House’s shows, I attended two very different events – in both the ‘Baby Grand Studio’ and the main theater. The former hosted a most entertaining show, ‘Magnifique,’ by the Red Velvet Cabaret directed by the versatile Peter Corry with a group of fine actors-cum-singers, weaving together music, dance and theatre in an intimate, fun and dramatic style. Two hours were packed full of classics, by Queen to arias from the world of opera, hits by Kate Bush to the brilliant lyrics of Cole Porter and from the Pet Shop Boys to songs from the wonderful film ‘Moulin Rouge.’

The main theater hosted a Belfast skit starring the ‘lady’ of Irish comedy, John Linehan, better known as his popular character, May McFettridge. Entitled ‘Dirty Dusting,’ by Ed Waugh and Trevor Wood by arrangement with David Bownes, the show is about three soon-to-be-made redundant women office cleaners, Olive, Gladys and Elsie, who – imbued with the spirit of entrepreneurialism – decide to launch a sex hot-line service, from the very office where they work. One can but imagine some of the side-splitting scenes and naughty one-liners. 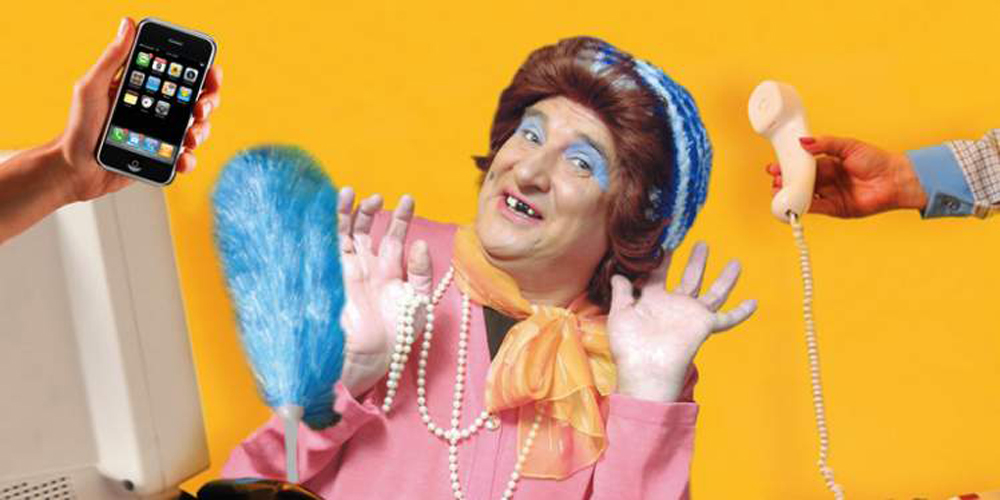 John Linehan as May McFettridge, flourishing in the show in ‘Dirty Dusting.’

The Grand Opera House also hosts a tour which includes a fascinating insight into the people behind the design and early management of the Theatre, its rich and colorful history, the line-up of performers and the building’s survival through Northern Ireland’s Troubles. The tour also highlights the Theatre’s interesting architectural features including elephant heads, Indian dancers and ornate and decorative boxes.

The venue also caters very well for the elderly and those suffering from dementia, with special seating, hearing aids and even special film screenings such as ‘High Society,’ the musical remake of ‘The Philadelphia Story’ starring Grace Kelly as socialite Tracy Lord who, as she prepares for her second marriage, still has feelings for her ex-husband (Bing Crosby).

As for relaxation, the Grand Opera House offers the ambient surroundings of its top-floor restaurant in its ‘Hippodrome,’ the foyer café ‘Luciano’s and several theater bars. It also offers special VIP packages.

And if that isn’t enough, it is also deeply involved in education with a summer youth project now in its seventh year with Lionel Bart’s multi award winning musical ‘Oliver’ produced by arrangement with The Southbrook Group and Cameron Mackintosh Ltd. During the summer, young people aged 16 to 18 years old can learn the ‘ropes’ and become youth tech crew.

Some mention must also be made here of the history and remarkable exterior and interior design of the Grand Opera House building itself. If presentation is a key factor in success, then this performing arts center emerges gleaming with triumph.

Opened on 23 December 1895, Belfast’s Grand Opera House reflects the achievements of architect Frank Matcham and its original proprietor Joseph F. Warden, as well as the many individuals and organizations that contributed to its illustrious history.

The theatre flourished during its early years, with its very first season comprising burlesque acts, musical comedies, farces and melodramas, not to mention classical opera and drama with regular performances of Shakespeare. Offering escapism to the worlds of comedy and drama, including a visit by Gracie Fields in 1933, a sold-out success. 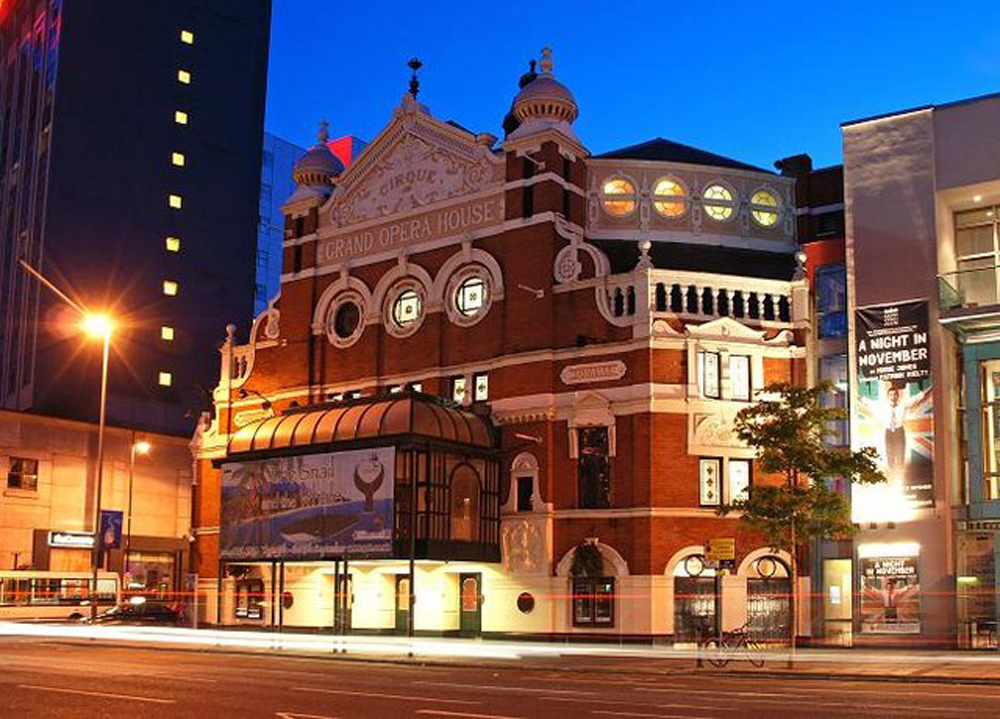 Due to restrictions on travel during the Second World War, the theatre presented weekly performances by the Savoy Players, a repertory company performing in Ireland then. They famously performed for General Dwight Eisenhower when he visited the Grand Opera House with Field Marshall Montgomery in 1945.

The end of the war brought touring opportunities to Belfast once again, and audiences were treated to leading opera and ballet performances, plus popular acts including George Formby and Laurel & Hardy. In 1963, an unknown Italian singer named Luciano Pavarotti made his United Kingdom debut on the stage of the Grand Opera House in the role of Lieutenant Pinkerton in Madame Butterfly.

However, civil unrest took hold of Northern Ireland in 1969, the so-called ‘Troubles,’ and the city center became a no-go area at night. By 1972, Rank, who had bought the building, had taken the decision to close it and sell to property developers.

With demolition imminent, the Ulster Architectural Society launched a ‘save our opera’ campaign and in 1974, the Grand Opera House became the first listed building in Northern Ireland. With listed status guaranteed, the building survived – however its future as a theatre was not guaranteed.

Following a 1976 survey by esteemed architect Robert McKinstry, the Arts Council voted to buy the building back from developers, and return it to use as a commercial theater. Between 1976 and 1980, the Grand Opera House was extensively restored, including its gorgeous ceiling panels in the main auditorium, and the construction of the crush bar on the front of the building, overlooking Great Victoria Street.

Throughout the 1980s, the theatre continued to prosper with healthy audience numbers and hit shows from London’s West End. In 1991 and again in 1993, it suffered extensive damage following two car bombs in Glengal Street nearby. Major refurbishment work followed both bombs, including the addition of blast walls to protect the auditorium in the future. In a very public display of resilience, the Grand Opera House hosted the BAFTA awards on Sunday, 14 September 1994.

A major extension opened in October 2006 was ushered in with a gala performance. Built on the site where the Hippodrome Theatre once stood, the extension provided much needed hospitality facilities and lift access between the floors. It also enabled Box Office, located opposite the theatre in Great Victoria Street, to be relocated inside the foyer and provided much needed back of house space, including additional dressing rooms.

So, if business or leisure brings you to Northern Ireland, make sure to check out the city’s proud and historic Grand Opera House for an evening of pure pleasure.