Brussels is known as the heart of the European Union but there is much more to this historic Belgian capital than simply political intrigue. Here are some highlights to enjoy on a short visit.

No better way for a comprehensive overview of the city than a walking tour of which there are many. Start with a free one. This non-profit group organizes two-hour events every morning with the meeting place being the Grand Place. The tour encompasses much of the central city, including historic buildings and museums, and is an informed introduction to the city. Instead of a standard ticket price, you donate as you see fit.

For a more specialized tour, focusing on two of Belgium’s most famous items – chocolate and beer – this tour, founded by Paris-born Marie, is a good choice. Four delicious hours later, with frequent ‘tasting’ stops, you’ll be well-versed on both products, not to mention feeling pretty merry and more knowledgeable about the city. To whet your appetite, how does exotic chocolates made from countries such as the Congo, Ghana, Vietnam, Papa New Guinea, Costa Rica and the Ivory Coast sound? Not to mention such delectable combinations as cardamom and blackcurrant, lemon grass and pepper and Earl Grey and bergamot. And with over 180 breweries, there’s no shortage of beers to taste, including the famous ‘Trappist’ variety made by monks, with the potent ‘Rochefort’ having an impressive 11.3 alcohol volume, as well as the esoteric ‘Kwak’ created in 1791 which comes in a shapely hour-glass with its own mini wood scaffolding.

Being capital of Belgium and, in effect, capital of Europe, there is no shortage of museums in Brussels, from music to medicine. Even ones to cartoons and comic books, in honor of Belgian-based character, Tintin, and the amusing Smurfs.

Did you know bat’s excrement was used for teeth fillings in China? Or that physical deformities meant closeness to God in pre-Colombian society? Such esoteric informational titbits and dramatic artefacts characterize this captivating medical museum. Housed on three floors at the Erasmus Hospital (metro stop of same name), this museum marries art, literature and medicine, with some exquisite ancient stone carvings, drawings and sketches and remarkable wax models of body parts, the most stunning depicting venereal disease and cancers.

For art, head for this ‘six-in-one’ building. The Modern, the Old Masters (including Breughal, Bosch and Reubens), Fin de Siècle, Rene Magritte, the Belgian surrealist, as well as museums devoted to painters and sculptors, Constantin Meunier and Antoine Wiertz. Covering 700 years of creative endeavor from the 15th to the 21st century, the building is across the street from the city’s main tourism office. My favorite works are Magritte’s marvelous pieces such as an eagle designed as a mountain and his painted bottles under glass; Bosch’s ‘fantastic’ depiction of the fall of angels; and Breughal’s medieval market scenes, which, though harsh, are realistic.

Having walked the city, it’s time to understand its historic beginnings in depth. This museum, housed in an ornate building with intricate wood-carvings and impressive stained-glass windows, grants comprehensive insights. Bringing history to life, you can sometimes see craftspeople at work here repairing faded tapestries. While there, we watched a series entitled ‘Life of Saint Paul’ woven by Pieter Coecke van Aelst in the 16th century being restored.

For music lovers, this is a must. From the earliest harpsicords to pianos and trumpets, there are hundreds to see, as well as listen to on special earphones, ranging from an 1892 Study Carrilon from Antwerp cathedral to a 2015 Seaboard Rise and Continuum fingerboard. For architecture lovers, the building housing the museum is an impressive example of art nouveau in Belgium.

For a stroll through the delightful world of comic strips, pop in here. The rather serious-sounding title belies its colorful and entertaining content, with more than 1,000 statues of the iconic Smurfs, those blue humanoids living in mushroom-shaped houses in the forest, created by Belgian artist Peyo (pen name of Pierre Culliford), as well as the adventurous characters, Asterix and Tintin. 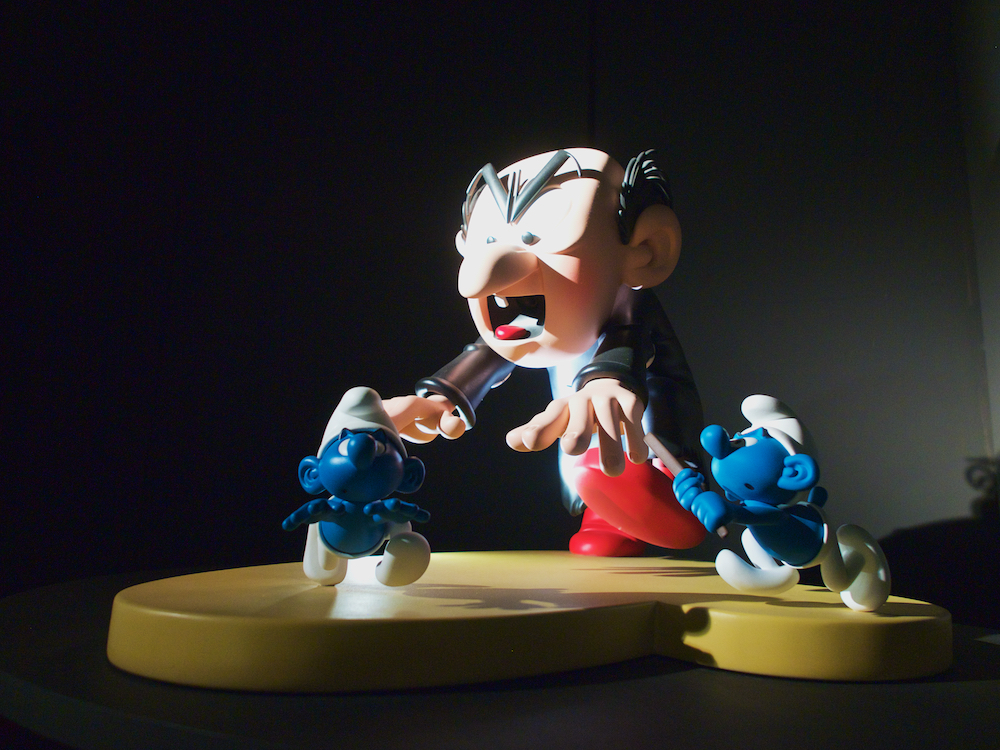 For more on the subject, this collection is housed in a fine example of Victor Horta’s art nouveau architecture. A permanent exhibition guides you through the history of the comic strip, as well as individually themed rooms.

For something much more serious, here are several rooms packed with memorabilia including photographs, letters, uniforms and weapons that tell the heartfelt story of heroism and the men and women who fought – and often died – battling the onward march of Hitler and Nazism.

While your days in Brussels are easily filled with walks and museums, the city also offers diverse evening entertainment.

A cultural complex in an art deco-style building, it comprises multi-function rooms including a cinema, a cafe and a three-floor concert hall seating up to 800, with performances ranging from jazz to classical music. Festivals and events there cater for both children and adults. We enjoyed an entertaining tribute by the talented Jazz 100 group to the genre’s musical greats such as Dizzy Gillespie, Ella Fitzgerald, Mongo Santamaria and Thelonius Monk.

When your Paris address is the Parisian Suite at Hotel Elysia, one can rightly sing #lavieenrose #luxurylife #luxurytravel @hotelelysia #paris
This newly opened #fivestarhotel in the #champselysees neighborhood is a hidden treausure #luxurytravel #paris #travelagain @hotelelysia
Iconic landmarks can easily be admired from the #rooftop of @kimptonsthonore in #paris #luxurytravel #whattodoinparis
What a jewel of #artnouveau this newly opened hotel in #paris #kimptonsthonore #luxurytravel
Lost in the mist but still visible, #eiffeltower watches over us at @kimptonsthonore #luxurylife #luxurytravel #paris
Good bye @sofitelparisfaubourg, we enjoyed the sophisticated setting with its air of elegance during two rainy days in #paris #luxurylifestyle #luxurytravel
A fashion show welcomes guests at @sofitelparisfaubourg #traveladdict #luxurytravel #travelagain #paris
From the #frenchclassic plate of #escargots to delicious #profiteroles a #dinner @chezandre.paris was just the treat on my #birthday #travel #finedining #luxurytravel
Sunset over #sfantugheorghedeltadunarii from @greenvillageresort #luxurylifestyle #danubedeltaromania #danubedelta
Tip for Life - If you can’t bring water to the horse, bring the horse to water. @greenvillageresort #nature #visitromania
Swaying willow trees, a reed-bordered lily pond and bright red blossoms of sumac trees are some of Nature’s delights that greeted us upon arrival at our tranquil lodgings in Green Village resort in the #danubedeltaromania @greenvillageresort #travelagain #luxurytravel #visitromania
Located on the edge of the Carpathians and selected as a former #European Capital of #Culture, this charming city has many attractions to offer, both culinary and cultural. But do you know why we call it 'city of a thousand eyes?' See our destination story on the site. #luxurytravel @enterprise_romania @ramada.sibiu @visittransylvania.ro @visittransylvania_ro @govisittransylvania @govisittransylvania #travelagain #gourmetfood
Hidden treasures of charming #boutiquehotel @schusterboardinghouse in #Brasov, one #historichouse you can now enjoy when visiting the #transylvanian city #luxuryhomes #traveltoromania #visitromania @epic.visits
In discovering the hidden gems of beautiful #Transylvania such as #Rupeacastle one needs a smooth, efficient car. For me, on a recent 1,000 kilometer roadtrip, that was #toyotahybrid from @enterprise_romania #visitromania #visittransylvania #luxurytravel
Still dreaming of staying in a luxury #hauntedcastle in #Ireland? This might be the one: Ballygally Castle overlooks northern Irish coast and you can see the full story about our stay there on our site @ballygally_castle_official #luxurytravel #visitnorthernireland #irishcastles
Hard to find a more personalised service in such a blissful setting as the one at Anna Charisma Chalet in #transyilvania @anna_charisma_chalet #luxurytravel #visitromania @visittransylvania.ro @visitromania @epic.visits
Meeting Vlad Tepes the Impaler by accident on the street in #Sighisoara #Transylvania during the #MedievalFestival this weekend
Relaxing sunny Sunday afternoon in Brasov Transylvania @schusterboardinghouse amid elegant furnishings and soft piano music #luxurytravel #luxuryholidays