Nestled amidst more than twenty scattered Sardinian islands and islets that make up the Archipelago of La Maddalena along the Bonifacio Strait, Ma&Ma Grand Hotel Resort & Spa could hardly occupy a more scenic maritime corner.

Located about 200 yards from the sea, some room balconies and the outdoor swimming pool and terrace command majestic views over gently rolling waves and rugged rock. 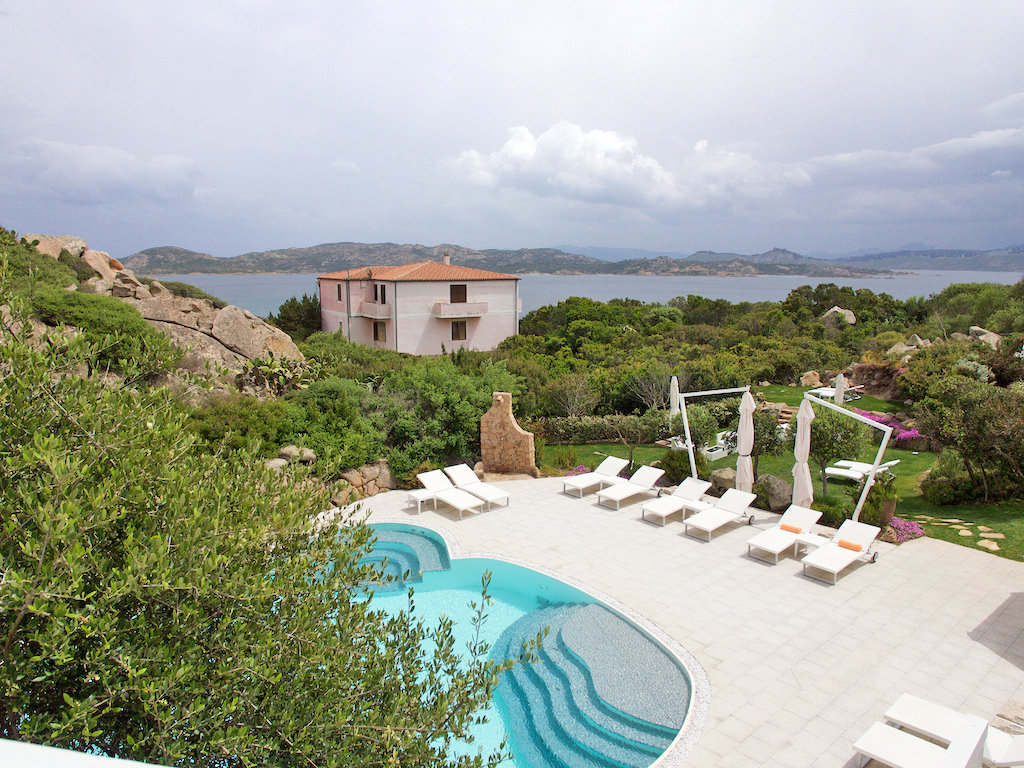 Owned by Manila Salvati and Mario Mela (whom the hotel is named after), this coastal property comprises 92 rooms, suites and villas, some in private ownership, and is reached off a sharp turn on the coast road, a 5-minute drive from the palm-lined ferry port. A short laneway bordered by cactus plants suddenly becomes a broader tar-macadam driveway leading straight to an open parking area close to the hotel lobby. 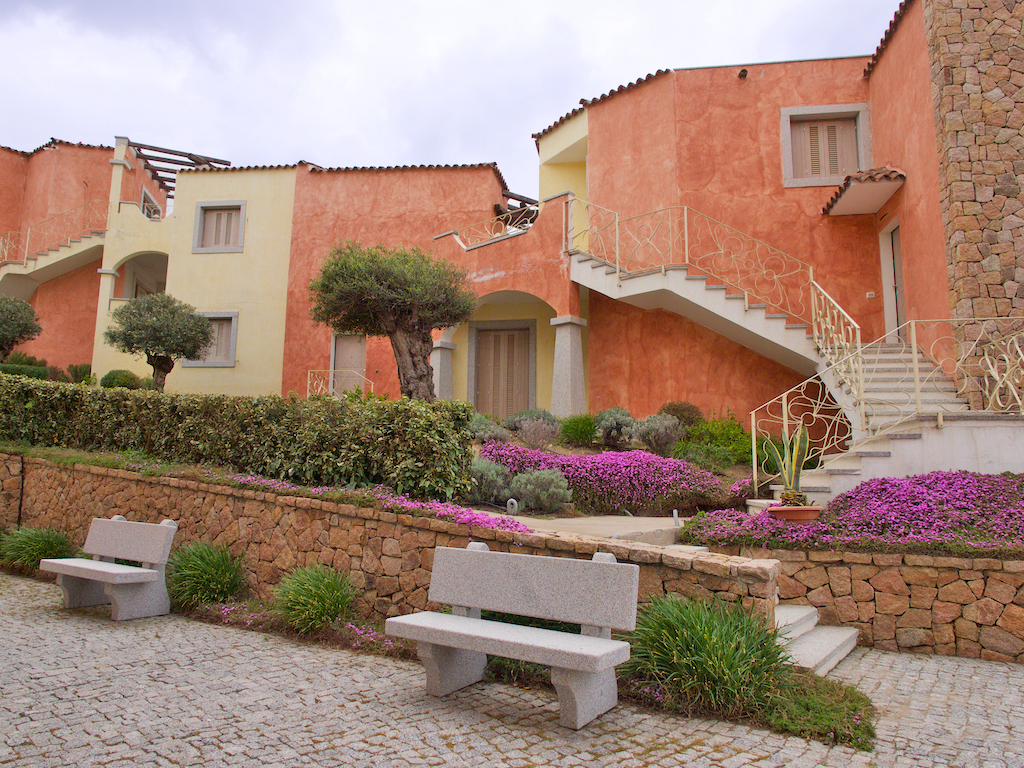 Featuring ochre and yellow painted villas with sloping tiled roofs, the property stands so close to the rocks one might think it was hewn directly from them. Spread over four floors, the rooms are spacious, each having its own balcony. Most overlook the residential complex called ‘Borgo Punta Tegge,’ which is set in three hectares of Mediterranean vegetation that surrounds the hotel. 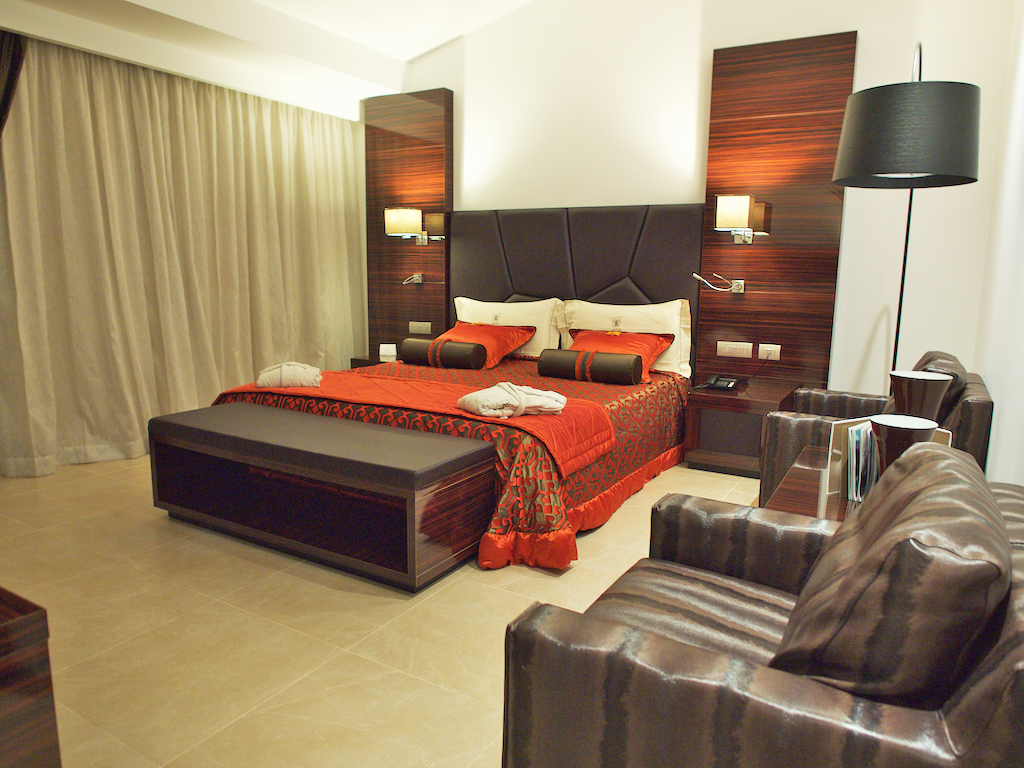 Our room was spacious with a large balcony, furnished with chaise longues for sun-bathing. The interior was designed in a contemporary, Italian-style with contrasting black and white leather, wenge and polished wood furnishings. 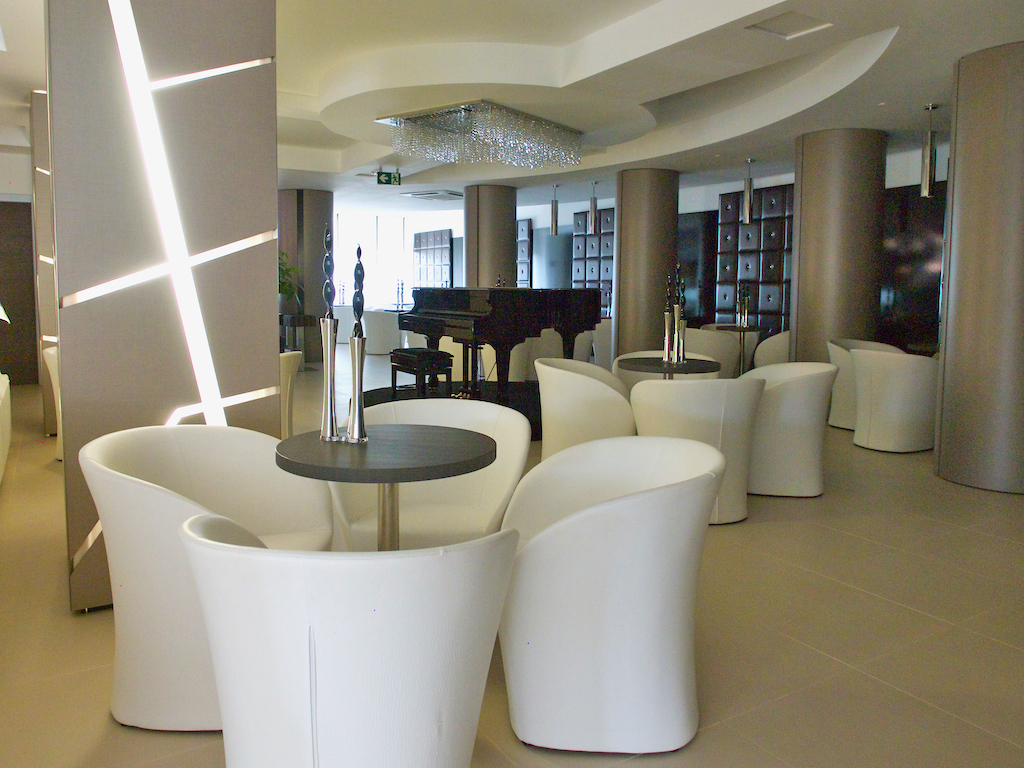 The hotel’s ground-floor restaurant, ‘L’Antica Isola’ is the domain of chef Agostino Simeone, where a comprehensive four-course dinner is served.  Not surprisingly, considering the location, emphasis is firmly on fresh seafood with bluefin tuna, prawns, octopus, amberjack, lobster and monkfish among the menu items. Meat lovers, however, are not overlooked with dishes such as Sardinian Melina beef fillet wrapped in radicchio, the island’s local lamb on violet potato flavored with marine rosemary and suckling pig. 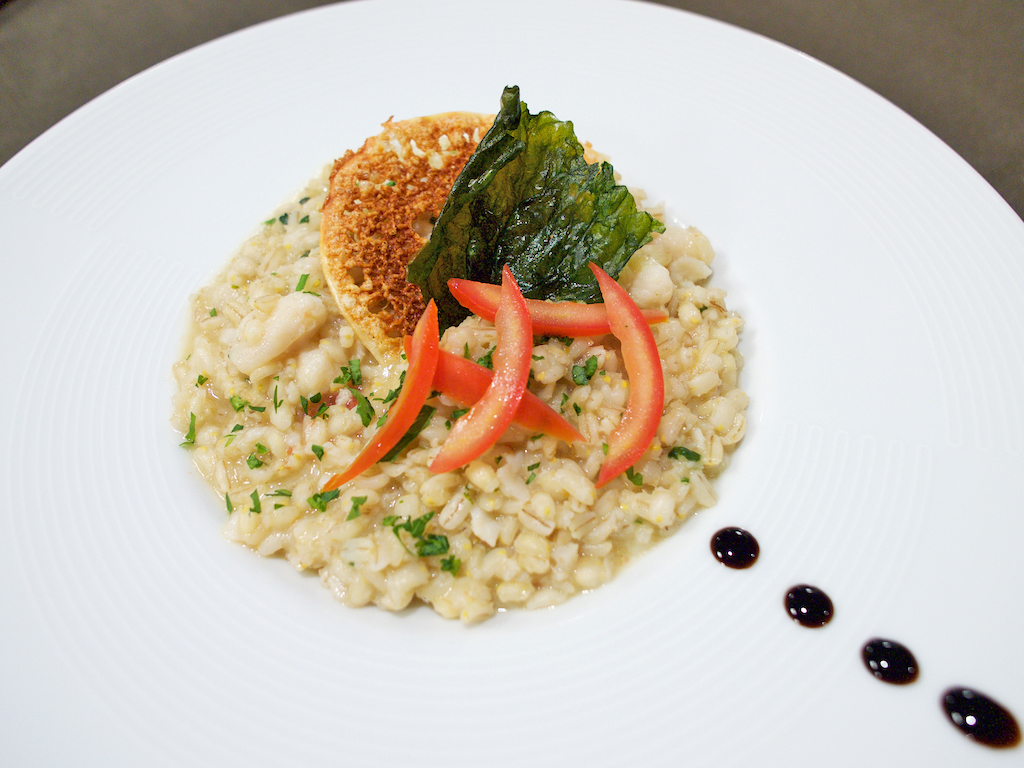 Appetizers indicate the high level of cuisine sophistication, such as prawn carpaccio flavored with tarragon and lime with blood orange and octopus and beetroot with fresh salad and myrtle flavored oil. We opted for chickpea mousse, bottarga (dried fish roe) slices which resembled thin slices of ripe cheddar, or as my more romantic partner described them, ‘gold coins of the sea,’ served with millefeuille of carasau (traditional Sardinian bread) with soy-flavored chicory and watercress salad. Another starter we tried was thin slices of tender beef wood-smoked, bursting with a flavor with a texture between carpaccio and bresaola, lightly marinated in Cannonau wine. A redfish ragout of tomatoes and fennel served on barley and a pasta with sweet garlic, walnuts and parmesan are excellent second dishes. 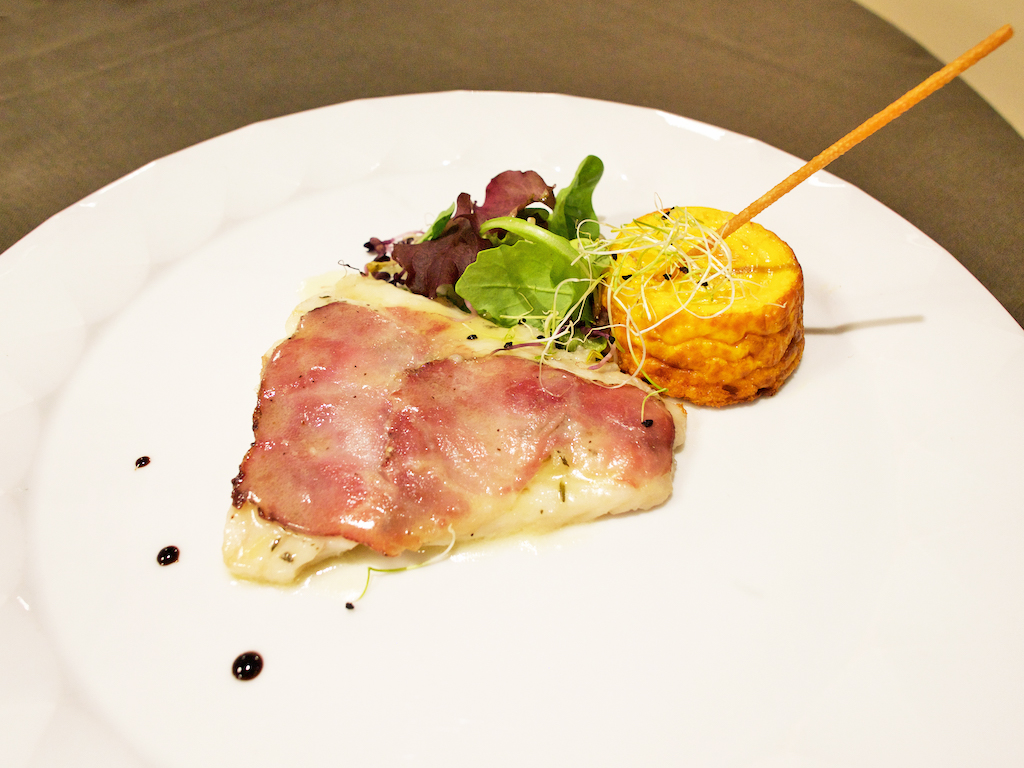 Maître d’ Mauro Bracco, and sommelier, Marco Delugas, made fine hosts, the latter creating a perfect wine pairing that included Vernaccia di Oristano from Famiglia Orro, Cannonau from Vini Contini and Badde Nigolosu from Tenute Dettori and the former explaining local ingredients used such as wild fennel and seaweed. A highlight of the mains was saltimbocca, but of fish not the traditional meat, with wild sage and Sardinian prosciutto in Torbato wine cream. Other pastas included durum wheat Paccheri with pistachio pesto, almonds, orange, mint and julienne of Marzolina cheese and wheat pasta Maccheroni sautéed with cherry tomatoes and soft Sardinian cheese with saffron and parsley. 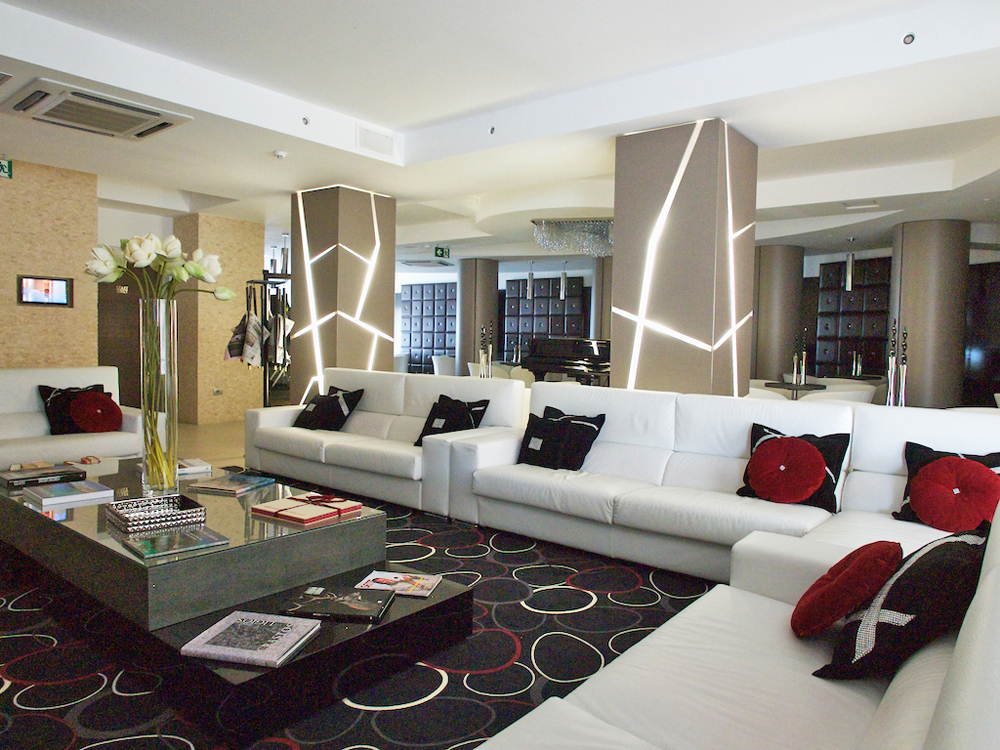 Situated in north-west of the island, along the Costa Smeralda, one of the memorable highlight of a stay here is a leisurely breakfast on the open terrace, under bright Sardinian sunshine beside the swimming pool near a tangle of bare boulders scraped smooth like huge seashells by wind and salted sea.

For something slightly more active, the hotel’s health facilities include an 800 square meter spa comprising a so-called ‘magnapool’ full of magnesium and potassium salts, sauna, Turkish bath and a Technogym. 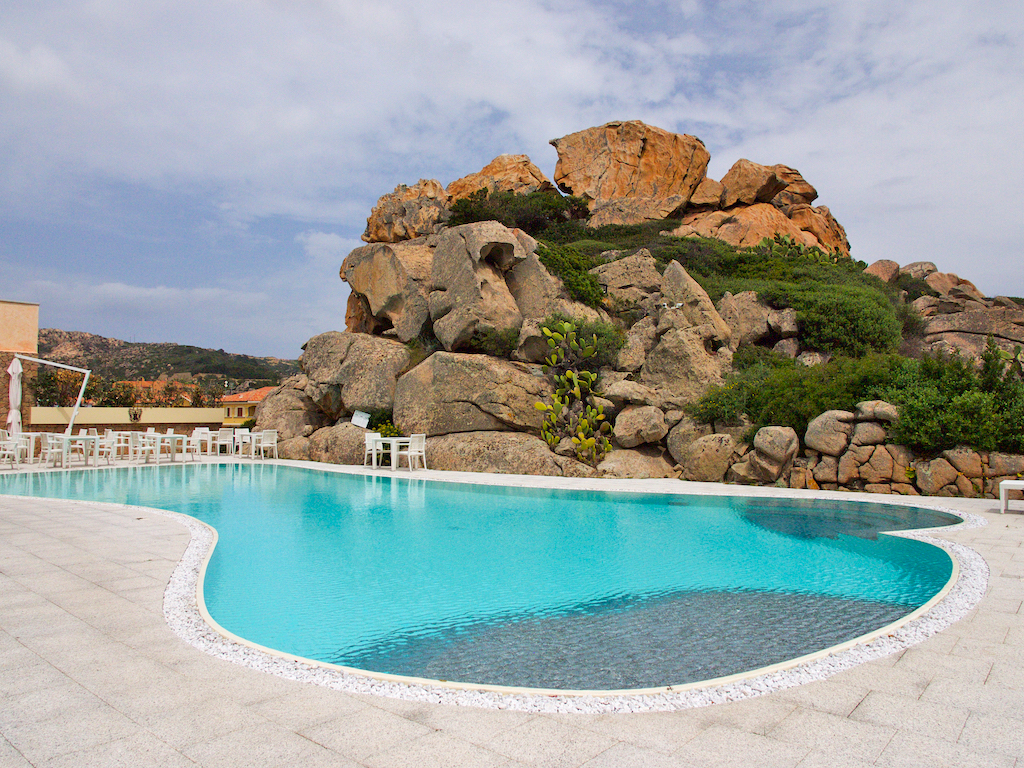 Shaped by wind and sea rushing through the strait between Sardinia and Corsica along the Gallura coast, the scenery close to the hotel is quite spectacular, beckoning swimmers, boat enthusiasts and hikers alike.

The La Maddalena Archipelago National Park, a protected geo marine area on the Island of Caprera, is a mere 15-minute drive away across a charming bridge. Home to turtles and reclusive lizards, it is a perfect place to enjoy a day’s outing. It is also the home of the Giuseppe Garibaldi Memorial Museum. Military general, politician and nationalist whose efforts finally led to the unification of Italy, Garibaldi came to live here in 1857. Four separate buildings contain a wealth of information and artifacts including video, audio recordings, paintings, statues books and newspapers about his intriguing life. You can also visit his countryside home a few miles away where he died and where one-hour walking tours take place every day.

With its location beside sea and to the charming town of La Maddalena as well as a national park, Ma&Ma Grand Hotel Resort & Spa offers a relaxing and exotic island haven.