Not only does the Radisson Blu Hotel Biarritz offer leisure guest rooms with broad windows overlooking the picturesque Cote des Basques, but even business clients can enjoy similar picture-postcard views from some of the hotel’s nine conference rooms.

Conveniently located opposite a broad stretch of seashore bordered by dramatic needle-like rock formations, this 150-room, 4-star property is a mere 15-minute stroll (the hotel also offers a free bus shuttle service) from the heart of the resort town’s elegant downtown area. Here guests can immerse themselves in shopping, a spot of gambling in one of the casinos, museum culture or simply relax in one of the many restaurants and cafes. 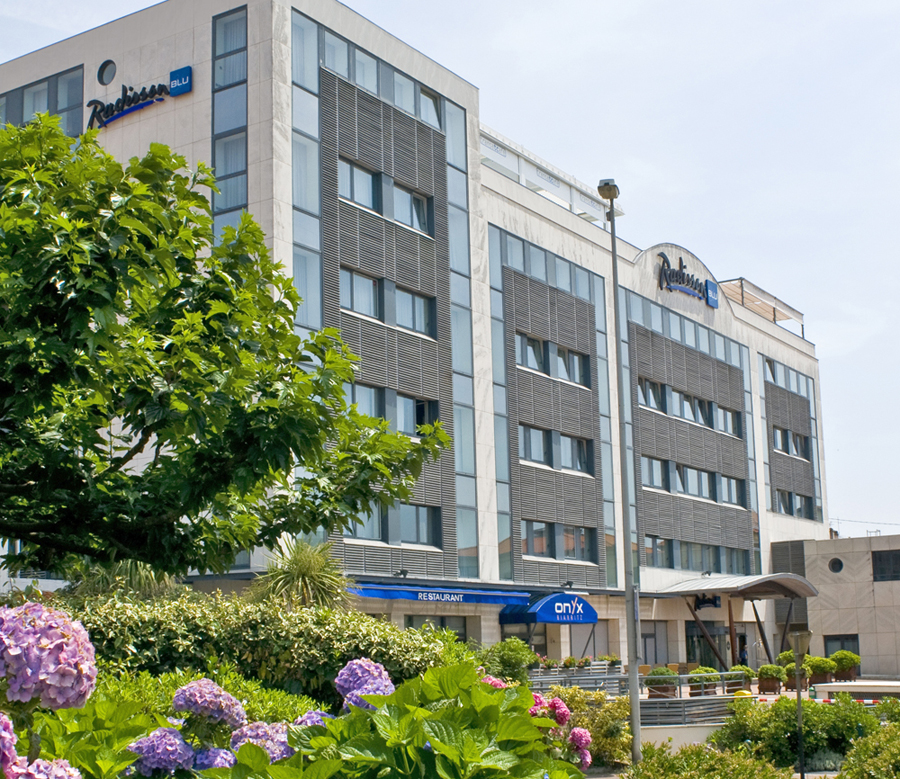 A lively covered farmer’s market features a score of stalls selling local products such as cheeses, wines and cuts of meat. There is also an interesting Biarritz Historical Museum with exhibits illustrating the city’s development from its early days as a fishing village to the modern day. In contrast, a Museum of Asian Art houses a wide range of artifacts representing the cultures of the Orient, particularly those of India, China, Japan and Tibet, such as ivory, stone, wood and bronze sculptures including ritual objects, Buddhist steles and a unique collection of Satsuma porcelain.

A short five-minute taxi ride in the opposite direction brings one to Biarritz’ most recent family tourism attraction – the Cite de l’Ocean featuring lots of computer animations as aids to understand changing weather and even a fun 3D surfing experience. Nearby is the town’s three-floor aquarium (Musee de la Mer), where a comprehensive collection of sea creatures range from seahorses, jellyfish and prawns to sharks and seals. An added advantage is that both places are short walks from the seafront.

Hotel guests preferring to stay close to their rooms need not worry, there’s plenty to occupy their time. Weather permitting, they can take advantage of the Radisson’s spacious, heated rooftop pool with stunning views across the bay and to the Pyrenees off in the distance, as well as drinks service from the nearby Sky Bar. The hotel also offers diverse leisure facilities comprising a small fitness center and a spa with sauna and hammam and a range of treatments including massages, facials and nail services. There is a choice of restaurants in the Transat (open April to November) and the Onyx, both offering international cuisine and local Basque dishes.

Sensitive to the needs of younger family members, the hotel hosts a special leisure room during school holidays, complete with board games, a movie room, a game console and a welcome gift for each child.

Outdoor sports enthusiasts also have choices. Ever since American Peter Viertel, husband of the well-known actress Deborah Kerr, surfed the waves here in the mid-1950s bringing public attention to the sport, it has attracted surfers from all around the world. Now home to prestigious competitions such as le Roxy Pro in July, the world female longboard championship, surf shops and board rental outlets are everywhere.

Golf aficionados also don’t have too far to travel either. Wedged between the Pyrenées and the Atlantic Ocean in France’s south-westerly extremity, Biarritz offers a number of challenging courses within an easy drive from the Radisson.  ‘Société des Golfs de Biarritz’ encompasses a number of members. Biarritz ‘le Phare’ golf course, for example, was already welcoming its first players in 1888 and one hundred years later, the Ilbarritz Training Center opened, creating a strong reputation for its impressive technical standards. Other nearby courses include Seignosse, Chiberta, Hossegor, Moliets, Arcangues, Makila and Real San Sebastien. 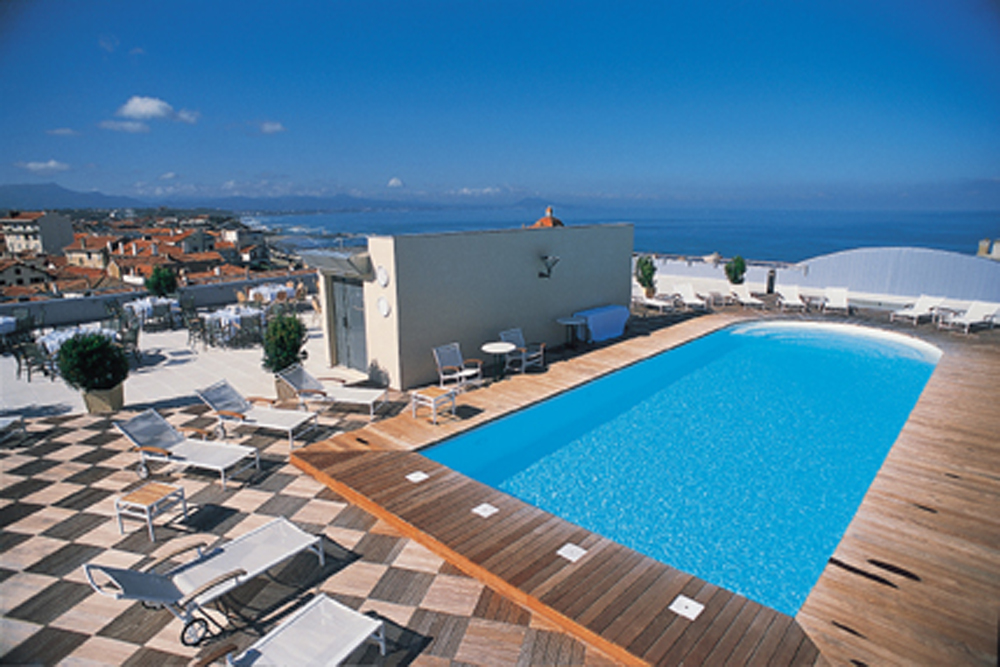 Biarritz Airport and the railway station for the high-speed TGV being just a 15-minute taxi ride away means the Radisson Blu Hotel Biarritz is easily accessible for both national and international leisure and corporate visitors while its location between seashore and the resort’s elegant downtown is another major bonus.

My Tweets
Join 1,182 other followers

Inside, it’s a chessboard of gleaming marble throughout the ground floor reception area and a mixture of old bare stone walls, cornices and modern decor with mouldings and a floor-to-ceiling bookcase, including a 1925 medical dictionary and collection of works by Ernest Hemingway, Molière and Balzac. Read about our experience in @villasfoch #bordeaux #luxurytravel #bordeauxhotels #travel #france
Inspired by famous muse of #BelleÉpoque era Paris-ballet dancer Cleo de Merode, considered the first celebrity icon and nicknamed ‘pretty little narcissus,’ @lenarcisseblanc Hotel & Spa is a mere five-minute stroll from the Seine at Pont des Invalides and Quai d’Orsay. See full story on our site #luxurytravel #luxuryhotels #parishotels #boutiquehotels #paris
Thank you Claire and Moses at The Workshouse in #dunfanaghy for the tour and the stories about the local history #workshouse #donegal
Very few of these old Irish cottages left now open for visitors and this one is the birthplace of writer Mici McGowan in #Donegal #historicalplace #ireland #irishwriters #history #micímacgabhann
Can you believe these are views from the same place? This is #ireland and more specifically, #northwestireland #donegal where only the experienced #travelers go #landscapephotography #seascapephotography #travel
The Old, the New and the Belfast in between #titanichotel #belfast #titanicmuseumbelfast #travel #northernireland #ireland
Happy #thursday everyone from @titanichotelbelfast suite overlooking #titanicmuseum #belfast #travel #luxurytravel #ireland
Enchanted Colorful Forest in the village of Poenari is easily accessible with a #luxurycar such as #bmwx6 #travel #romania @bmwromania #luxurytravel #woods #nature #villages
Rustic encounter in the #village of Gornovita in #muntenia #villagelife #villages #romanianvillage #travel #countryside #romania @bmwromania
A short stop to admire the famous #artwork of #constantinbrancusi in Targu Jiu and this one is the #infinitecolumn #travel #romania #townsofromania #romanianartist
We are trying to give some support to a group of #volunteers helping #abandoneddogs in Romania, to cover costs of food and shelter for some of them as the winter approaches. Please #donate and pass on https://gofund.me/95cd45e0
A drive on the tops of the Carpathian mountains #skylinedrive #transalpina #romania #drivinginromania #carpathians #carpathianmountains #travel @bmwromania #landscapephotography
Sunday morning market in Novaci, a small town at the bottom of Carpathian mountains, Romania. Traditional grilled #mici mustard and cold #beer #travel #romanianvillages #villagelife #village #markets #sundaymarkets #travel
Head in the clouds. Exploring Transalpina, a mountain route that will have drive at over 2000 m altitude. #transalpina #romania #exploreromania @bmwromania #travel #autumndrive
A stop in the old capital of #Romania, Targoviste to enjoy both the new and the old #historictowns #targoviste #medievalromania #travel #townsofromania #travelinromania @bmwromania
Journey through the ring of Saturn, an immersive experience at Supernova Planetarium inside a saltmine in Romania @planetariu.ro @bmwromania #stargazing #planetarium #saltmines #travel #travelinromania
We loved our experience at the Supernova Planetarium, the largest #planetarium inside a #saltmine in #romania it’s a unique experience to look up at the sky when you are 200m beneath the earth. A great stop on our journey in Romania driving a #bmwx6 #luxurytravel #visitromania #hiddenromania @bmwromania @planetariu.ro
A hidden gem, the amber museum in the village of Colti #buzau explains the fascinating history of this area, rich in the most diverse #amber deposits #travel #romania #luxurytravel #romanianvillages