Once the sacred preserve of England, the fashionable tradition of afternoon teas has spread to other countries, including France, with Paris having its own vibrant variety. Here are a few of the best from the City of Light. 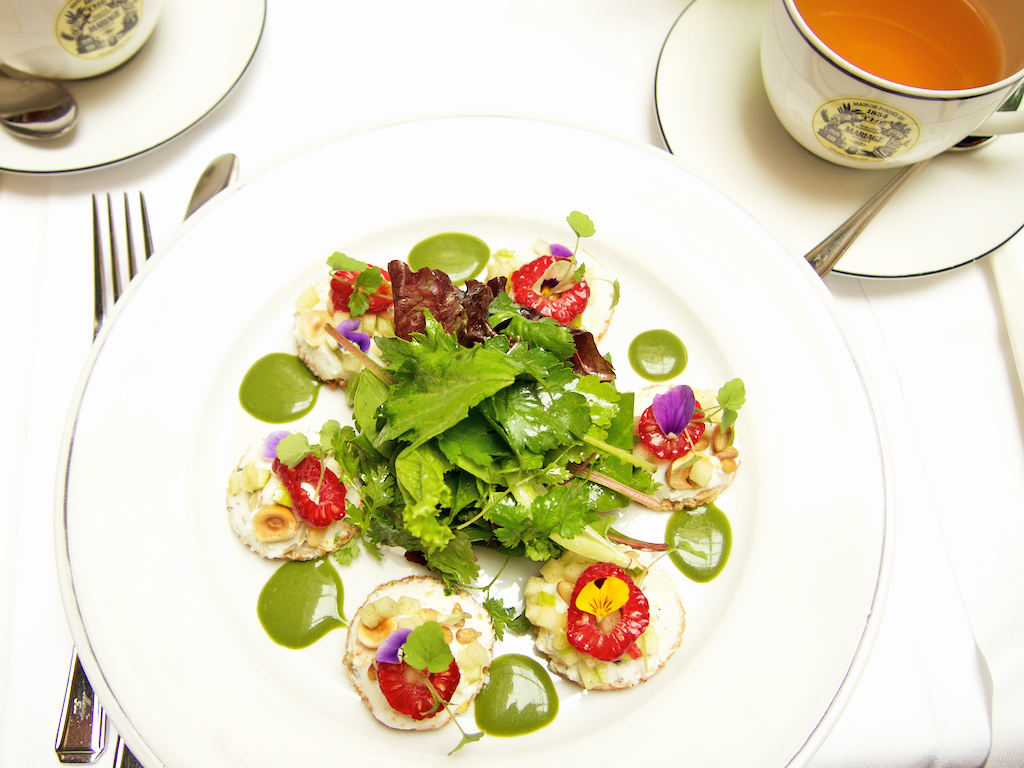 Having been founded in 1854 by brothers Henri and Edouard, the Mariage Frères company knows more than most about tea, amply illustrated by its oldest tea house located in the Marais district, which offers 600 different varieties.

It is one of the company’s seven teahouses in Paris, some of which are restaurants, plus two in Tokyo, and one soon to open in London (in Selfridges this autumn). First in the network, this one was originally a warehouse where the company stored its imported teas.

The spacious 85-seater venue displays a fusion of old and new design – a sense of historic authenticity with decorative antiques and furnishings gleaned from an old apothecary and a glass ceiling above. Seated beside a rose plant on a shelf resplendent in a gold-colored vase we were lulled into relaxation by soft music ranging from opera and jazz to chanteuse Edith Piaf. A cold drink of apple, macha, spinach, cucumber and ginger and a chilled ‘blue tea’ made specially for Bastille Day make perfect energizers after our day of city walking. Tasty food followed including two different kinds of sandwiches – gourmet bread with salmon and lime caviar, as well as an esoteric mix of aubergine, tomato and zucchini, herb butter, roasted pepper, tofu and goat cheese with roasted hazelnuts and pine nuts, sunflower seeds and raspberries. 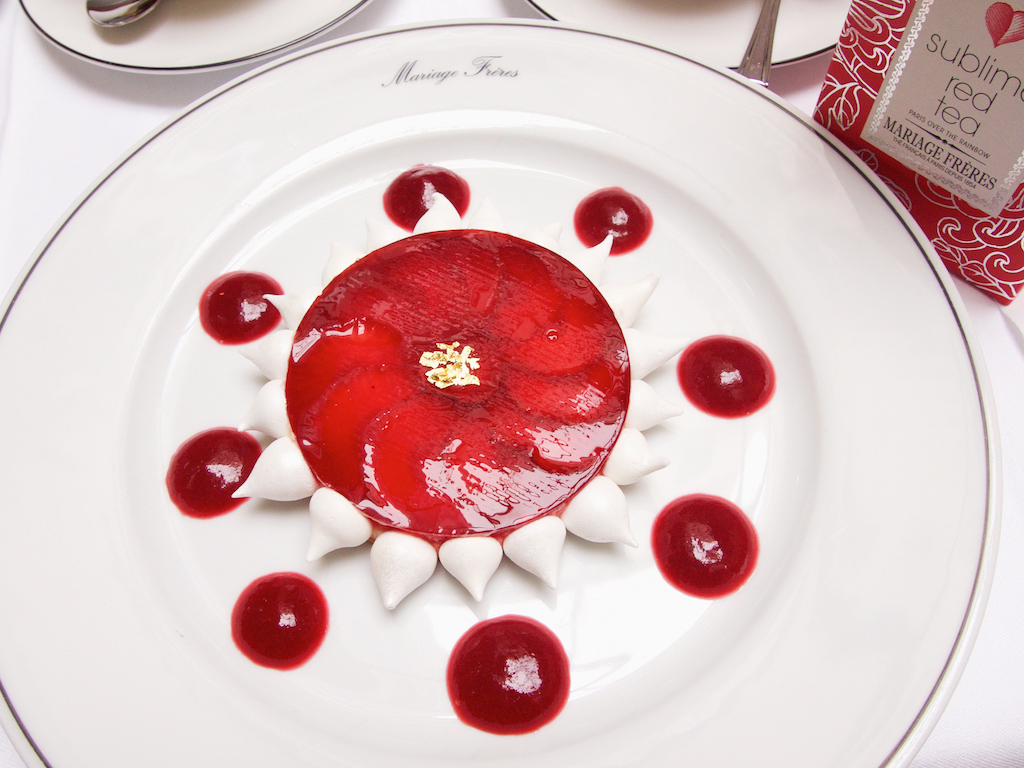 Mariage Frères prides itself on what it terms ‘tea gastronomy,’ by which tea is not only paired with certain foods but is actually a key element of them. White tea flavored with citrus and flowers proved a perfect complement to a croque monsieur interpretation with artisan-smoked salmon. Dressing for the romaine lettuce is made with ‘sur le Nil’ tea, a citrus blend of vanilla and lemongrass. 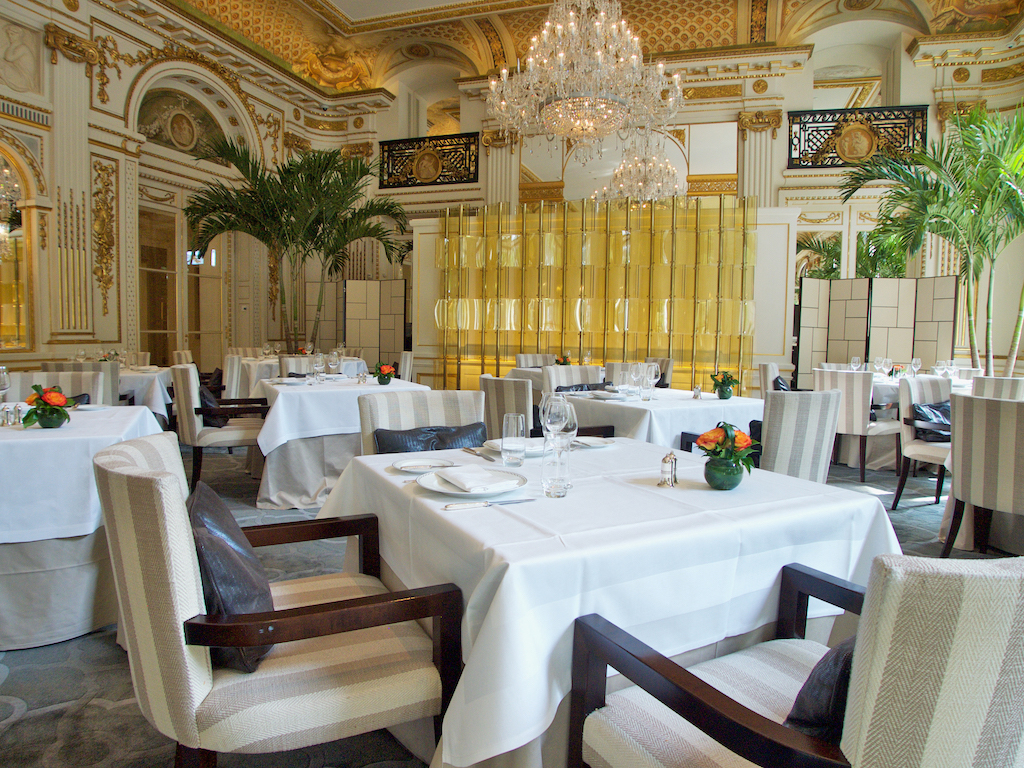 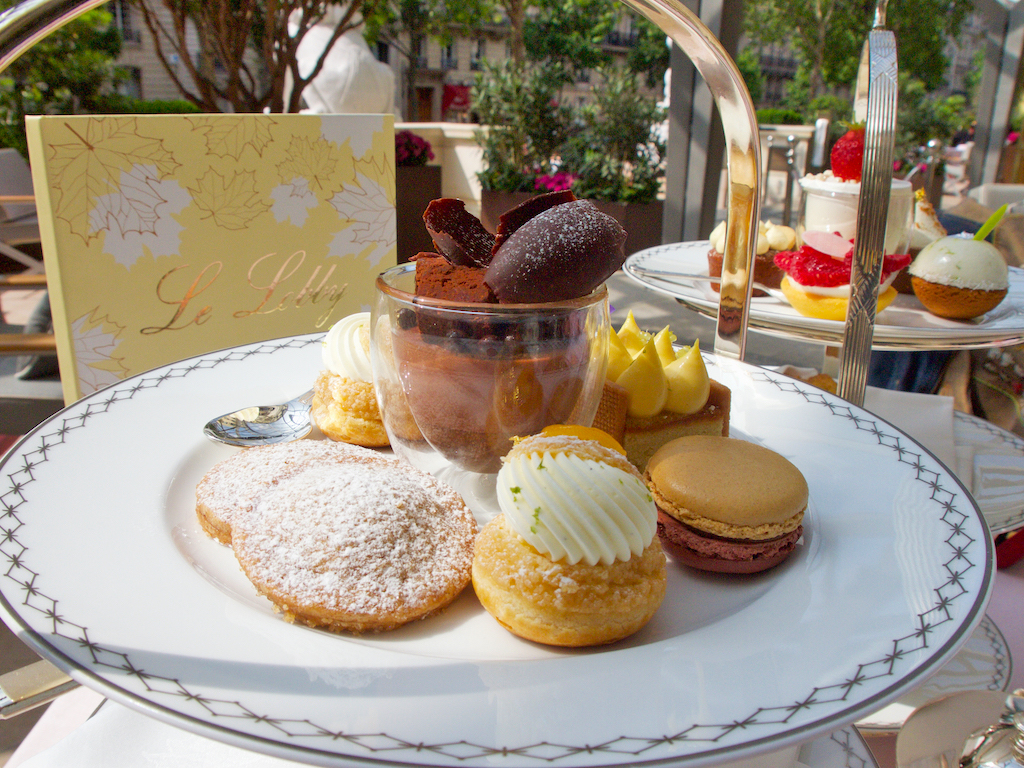 Two versions of afternoon teas are offered, the English and the French, the latter having waffles instead of scones as one of the differences. While the former featured traditional salmon, cucumber and egg sandwiches, the latter displayed a more Mediterranean flavor with chicken and herb on Nicoise bagnat bread, as well as tomato and organic quail egg with tapenade on sourdough bread.
Sweet highlights included raspberry cheesecake with a semolina base and caramel shortbread on the English platter and an eclair filled with lime-flavored custard on the French. Of the teas, we really enjoyed the white Jasmine Yin Zhen and the black Pu-Erh Menghai Printemps with wholesome woody notes. 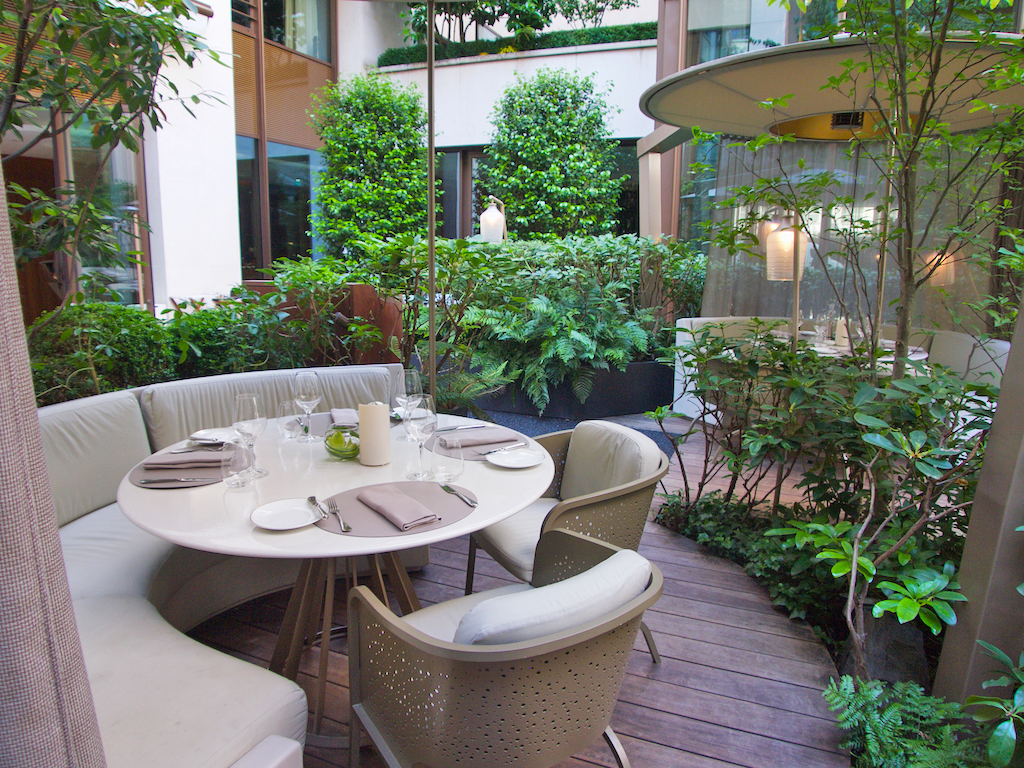 Afternoon teas are hosted in this hotel’s ground-floor, Camelia restaurant, with both indoor and outdoor seating. We chose the latter, an almost woodland-like setting, with plenty of decorative foliage, including tall trees, bushes and plants such as camellia, hortensia, rhododendron and ferns. Natural wood flooring and a ‘river’ – a narrow waterway divide, plus mini walking paths, adds to the overall garden-like atmosphere. Hanging lanterns and orchids on tables add a romantic touch. Known as the ‘Bento flower’ menu (in Chinese ‘bento’ means ‘ box’), the restaurant deserves credit for creativity, with bite-size dainties symbolizing Paris in different seasons presented in ornate round, Oriental boxes. 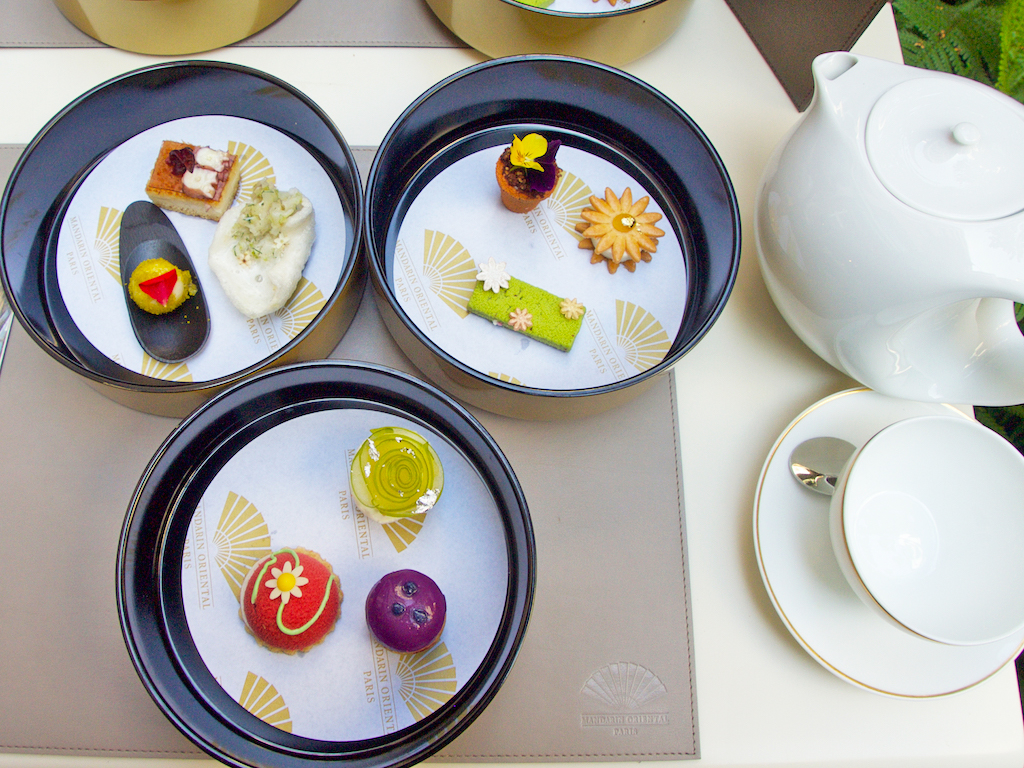 The Spring version ran the color gamut from lime-green to violet, with a caramel, and vanilla cream dessert shaped like a flower pot, a biscuit as a daisy and almond and pistachio as a lawn. Two of the savory items were coin-shaped cuts of octopus set on a block of hibiscus flower flavored jelly and tartar of dorade with lime and dill on a prawn cracker. You’ll need dinner later as servings are more delicate than filling. The six bite-size savory items and three sweet ones served (there are no scones or sandwiches) are best complemented by the ‘Dragon’ green tea (with aromas of fresh herbs and orchids) and the white ‘Aiquilles d’Argent.’ 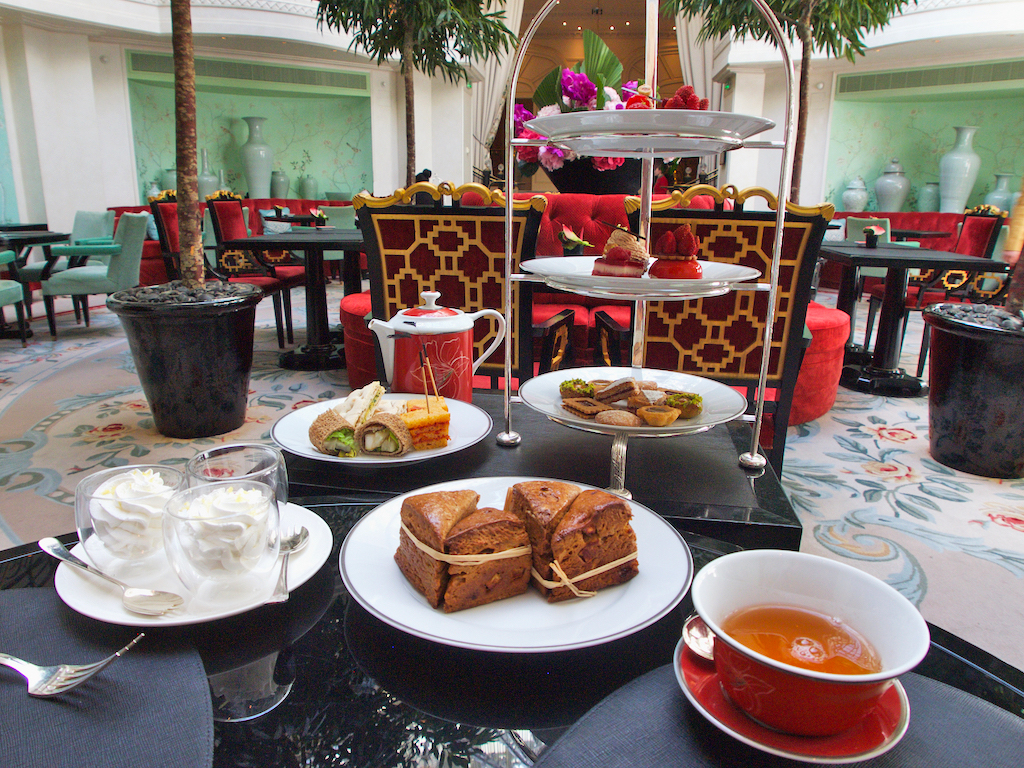 Afternoon tea at this luxury hotel takes place in the rotund La Bauhinia restaurant, with over 40 teas supplied by Maison Dilmah. Natural light filters through a glass ceiling from which hangs an impressive Murano glass chandelier. Our table stood beside a decorative lacquered rose Chinese wardrobe with delicate black engravings, a collection of ornate brown vases lining its top. Around us lime green walls seemed to come alive with a birds-and-branches motif. Seated on soft, russet cushioned chairs, we started with warm, triangular-shaped raisin and apple scones, part of the special vegan menu. 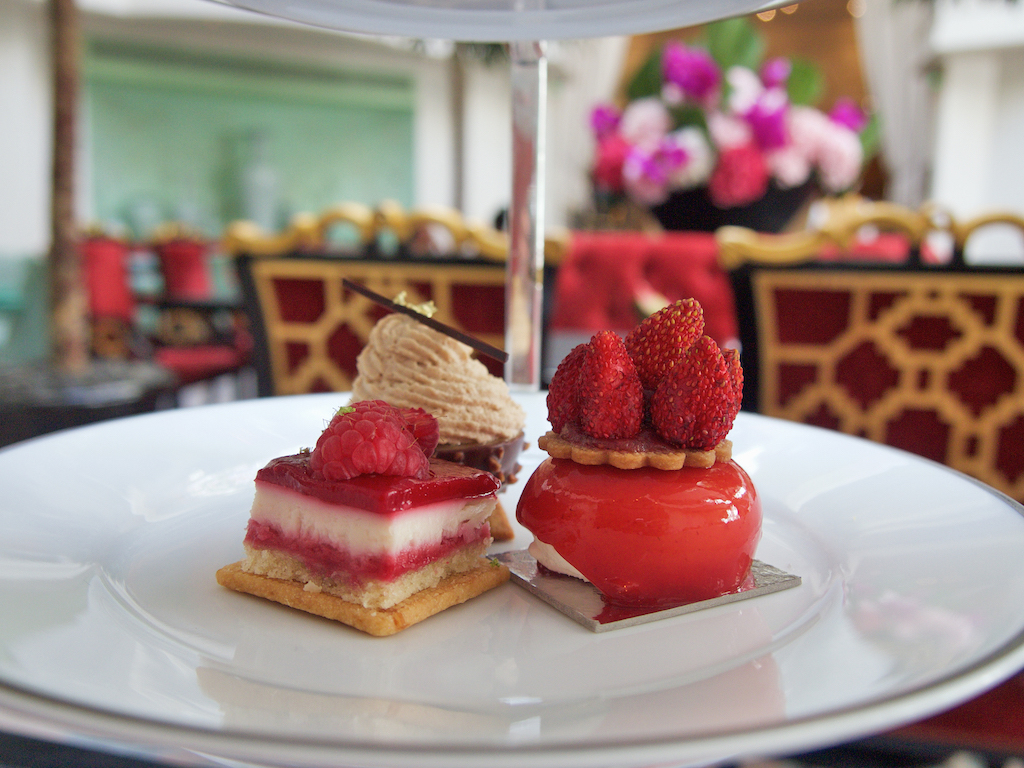 As accompaniment, we chose Keemun special, a black tea from the Qimen region with malt, chocolate and plum aromas and an orchid finish, which also suited finger-sandwiches of cucumber and mustard on Norwegian bread and galettes filled with daikon radish. ‘Silver tips,’ a white tea from the Kataboola Estate, partnered well with dessert which included a dome of coconut and strawberry sponge cake, mount blanc with hazelnut instead of chestnut and pistachio, apricot and orange blossom shortbread.

Enjoying a global reputation for its culinary excellence, it’s not surprising Parisian restaurants have turned their attention to creating memorable afternoon tea experiences and in doing so providing an enticing break from walking this beautiful city.