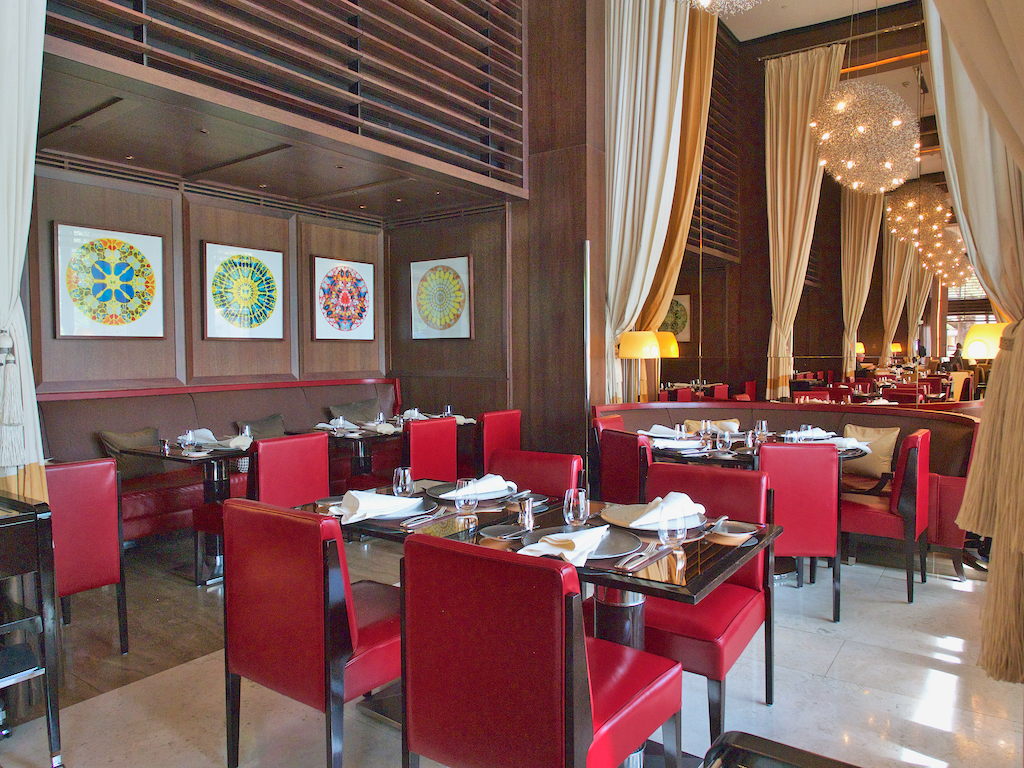 For a suave experience, try the ‘CUT’ restaurant at 45 Park Lane hotel, part of the Dorchester Collection. Located on the ground floor, it offers a contemporary setting with comfortable leather seating and large windows offering fine views across to the park. Mirrors create the surreal effect of an endless dining room and filling it with abundant light. Executive chef David McIntyre and chef Wolfgang Puck serve up a generous selection of starters including a delicious Dorset crab and lobster ‘Louis’ cocktail with spicy tomato-horseradish, a colorful merry-go-round on a plate, and a big eye tuna tartar with wasabi aioli, ginger and togarashi crisps presented as a tarte tatin, with delicate slices of avocado on top. Salads are plentiful, from lobster cobb to Japanese barbecue and Chinese chicken. The entree list strikes a balance between seafood and meats. Try the succulent pan-roasted South Devon Angus fillet mignon served with four different sauces, including violet.

With Puck being a native of Austria, there’s probably no better place to try his nation’s traditional lightly crusted veal schnitzel, served with marinated fingerling potatoes. Puck also produces some of the wines served at the ‘CUT’ and a wine pairing allowed us the opportunity to sample a 2012 Puck Bordeaux Blend, as well as a 2009 Puck Cabernet Sauvignon GIII Beckstoffer Georges III Vineyard. In the case of the latter, a portion of the proceeds from the sale of each bottle is donated to the Keep Memory Alive Foundation (KMA), an organisation that supports research into neuro-cognitive disorders from which Puck’s mother suffered.

Desserts are a tease but it’s hard to resist the coconut stracciatella baked Alaska, a white chocolate buttermilk cake with raspberry sorbet, or the salted caramel chocolate brownie with caramel ganache and white chocolate sorbet.

Oval Restaurant at The Wellesley, close to Hyde Park, also offers an elegant setting. Aptly named due to its shape, it is nestled deep in the heart of the art deco-style hotel. It serves Italian fare in an elegant, 1920s ‘la vita e bella’ styled-room with marble floor, distressed mirrors and white leather seating. An enjoyable feast is a starter of roasted scallops with pancetta and peanut puree, followed by homemade tagliolini with ossobuco and saffron or potato gnocchetti with seafood and broccoli puree. As the restaurant has a strong seafood menu, a wholesome choice for mains is the Dover sole with grilled asparagus. Or, if you enjoy tableside preparation, wild sea bass baked in salt-crust is skillfully filleted by friendly waiter, Guiseppe Da Vita.

Leave the drinks to sommelier Lorenzo Mazzola, a skilled artisan in the art of pairing wines with diversity being his hallmark. One such combination is Montepulciano from D’Abruzzo, Chardonay Tormaresca from Puglia, Chilean chardonnay blanc and Whispering Angel from Provence. As you’ll be able to walk off those extra calories in nearby Hyde Park, treat yourself to a chestnut semifreddo with pistachio ice cream to complete the ‘vita e bella’ theme.

If you fancy lunch with a touch of sight-seeing and a musical twist, then a leisurely jazz cruise with ‘Bateaux London’ along the Thames is just the ticket. The 3-course menu is impressive, including starters of whipped goats cheese, beetroot, spiced crumble, crispy celery and toasted focaccia or ham hock terrine with piccalilli, a relish of pickles originating from England’s colonial rule in India.

Mains include a choice of either chicken stuffed with sausage and sage, grilled salmon or a vegetarian mille-feuille of courgette, spinach and parmesan. An interesting choice of dessert is a beetroot sponge cake with cream cheese. Lasting around two hours, the cruise passes many famous landmarks such as Waterloo Bridge, Big Ben, the Obelisk, the O2 Arena and the London Eye. A large open deck above the main dining area provides a comfortable platform for photography or enjoying a spot of sunshine while watching the cityscape slide by.

Culinary experiences in London wouldn’t be complete without the experience of a traditional English afternoon tea. Two options are the Milestone Hotel, part of the Red Carnation Hotel Collection, and the Jumeirah Carlton Tower, both located in Kensington.

Hosted in a ground-floor, book-lined, rose-filled room featuring walnut paneling and an open fireplace, the Milestone Afternoon Tea is perfect for those seeking a cozy, traditional experience, set as it is in a building several hundred years old. Restored to the glory of a bygone age through extensive renovation, the tea-room displays a large painted canvass of well-known English playwright, actor, composer, Noel Coward as ‘The Spanish Don’ on one wall and a scene from Wimbledon on the other, which together create a parlour-like atmosphere. 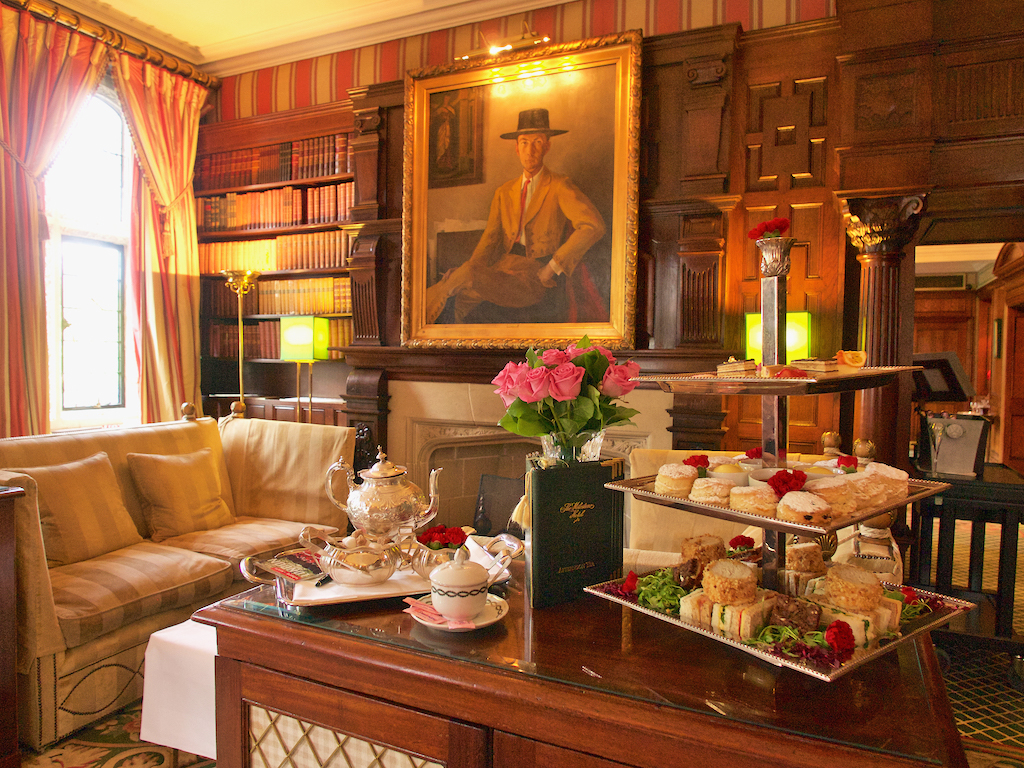 Teas with dramatic names such as ‘Lovers Leap’ and ‘The Mighty Assam’ accompany classic sandwiches of smoked salmon on multispeed bread and ham and mustard on wheaten, with the most memorable being a combination of chicken and roasted almond on white bread. So delectable are the scones, a second helping is compulsory. For desserts, don’t skip the delicious rose- flavored macaroons and lavender eclairs. There is also a gluten-free version of the menu.

Jumeirah Carlton Tower presents a contrasting ambience to the Milestone, with its afternoon tea hosted in a much more modern, spacious, open-style room facing the hotel’s main lobby with its centerpiece being a replica of ‘the tree of souls’ bedecked with fairy lights.

Around it, porcelain teapots display colorful flower arrangements. Under the title ‘A Brilliantly British 90 Years Afternoon Tea’ the menu is themed as a celebration of Queen Elizabeth’s 90th birthday, with items reflecting various decades of her rule. They included watercress and shrimp finger sandwiches, a popular filling in the inter-war 1930s era; creamy ‘Coronation’ chicken buns, a dish first prepared for the Queen’s 1953 coronation banquet; and miniature quiche Lorraine tarts ‘which, the menu stated, “no sophisticated 1980s British buffet table could be without.’ 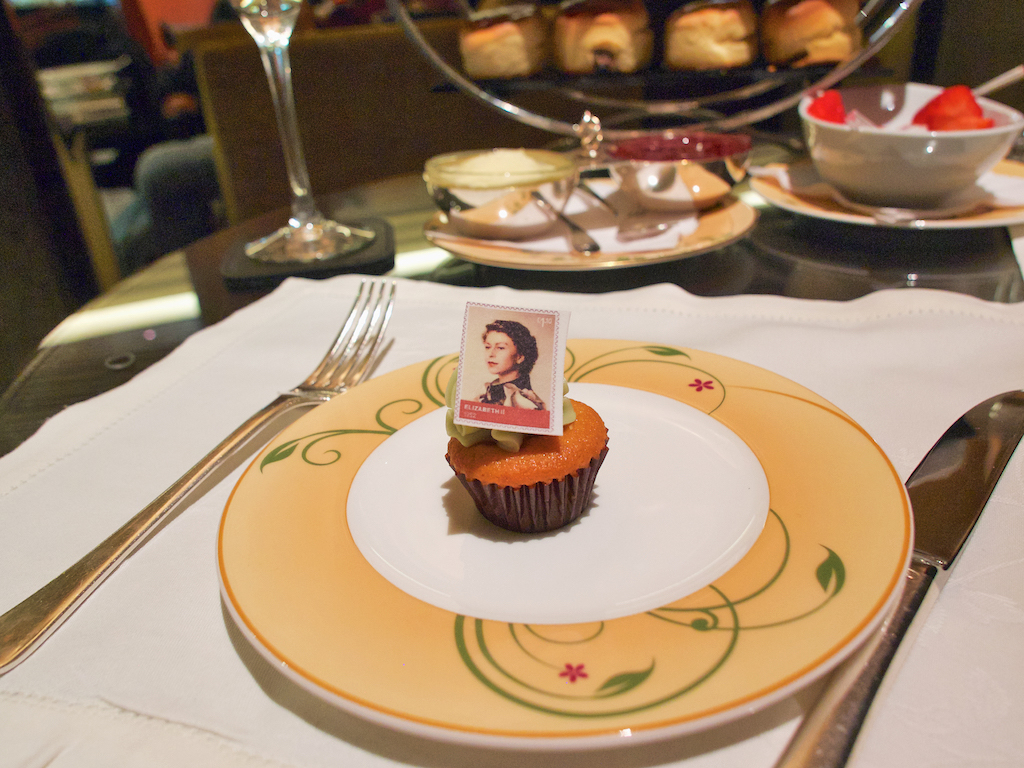 We were also informed the strawberry jam sponge ‘penny’ was a favorite of the Queen’s as a child in the 1920s, the miniature bread and butter puddings topped with gold leaf and golden raisins were served in the rationed years of the 1940s and the chocolate and cherry black forest gateau was ubiquitous in 1960s England.

Teas, ranging from chrysanthemum to Lapsang Souchong, are served on Floral William Edwards fine bone china. Service from our Philipine waiter, Christian Cleofas, was very attentive to the point that generously offered extra portions of whatever items we liked most. This special ‘Royal’ afternoon tea ends on June 26.

Landing half an hour late in #Paris and we’re relaxed as our #luxuryride with @blacklane includes a free hour wait #luxurytravel #travel #luxurylifestyle #luxurycars
This is the closest you can get to sleeping near #versaillespalace See our latest article on how best to enjoy a stay at @waldorfastoria #versilles #luxurytravel #france #travel
Only the French can transform prunes and Armagnac into such a delectable dessert. See our story ‘Gourmet journey to the most historic restaurants of Paris’ #Paris #luxurytravel #gourmetfood #frenchfood
Our choice of restaurant in #albifrance is Alchimy and the #desserts are only one reason.
Where will you celebrate #teaday? Read about our #sensorial afternoon @mariagefreresofficial in the #maraisparis #afternoonteatime #luxurytravel #travel #gourmetartistry
Traditions are still alive and well in the medieval town of Sighisoara in Transylvania, Romania. #travel #sighisoara #transylvania #medievalfestival #festivals
Renovated Hôtel de Paris Monte-Carlo Greets New Era. Read our latest article on how to best enjoy #MonteCarlo and #hoteldeparis #luxurytravel @visitmonaco @hoteldeparismc
Scenic setting and a singing chef, just two of the treats awaiting you at Ioana Hotel in #sinaia #romania See new story on our site about this #fivestarhotel on #prahovavalley #luxurytravel #transylvania
It’s always good to challenge our senses and look at #art from various angles. Don’t miss this #immersiveexperience @atelierdeslumieres #paris to see #Kandinski and #cezanne in a new perspective #parismuseum #whattodoinparis #luxurytravel
Let it rain in Paris! I’m home, having a meal prepared by #chef Santiago Guerrero at #HeyHoneyrestaurant #hotelmaisonmere #gourmetfood @maisonmere.lovers #luxurytravel #tuesdayinparis #lunchinparis @maisonmere.paris
Hmmm… Mondays. Perfect day for a #teatimeinparis and we have just the right place #mariagefrères in #maraisparis @mariagefreresofficial #afternoontea #tea #paristea #authenticexperience
Good morning, Paris! View from the 6th floor suite @maisonmere.paris #morninginparis #paris #luxurytravel #mondayinparis #goodmorning #parisrooftops
A really homey feel created with so much attention to detail by owners of @maisonmere.paris We love it! #luxurytravel #parishome #parishotels #paris #mondayinparis
Finishing a good #saturdayinparis with a #cognac in the #hotelbar @hotelbelami @bsignaturehotels #saintgermain #paris #luxurytravel
As above so below. Good at @hotel_vernet #restaurant matches the skill and beauty of its historic ceiling #belleepoque #historicparis #gourmetfood
Something special tonight, dinner unde a 1913 #gustaveiffel ceiling @hotel_vernet @bsignaturehotels #champselysees #paris #finedining #luxurytravel
View from bedroom window of @hotelbelami @bsignaturehotels over #stgermaindespres #parisvacation #weekendinparis #luxurytravel
Saturday in Paris, fun begins just as you step outside your hotel when staying @hotelbelami @bsignaturehotels #saintgermain #livemusic #saturdayinparis #luxurytravel #travelagain