As the largest 5-star hotel in Lisbon, the Corinthia has long attracted corporate business but more recently it has focused greater effort on the tourism sector, with strong promising results.

The building had been a hotel for more than 19 years before the Pisani family of Malta, founders of the Corinthia Hotel Collection, took it over in 2004. And while it already underwent radical renovation then to raise its status from four to five-star, it is doing so again with the property’s Tempus Bar and lobby area revamped last year and more rooms being remodeled over the coming 12 months.

Of the many conveniences this luxury property offers associated with its leading position in the capital city’s hospitality marketplace, location is among the top. While removed from the noise and hubbub of everyday city life in Campolide, in the heart of the financial district, a metro station lies within a minute’s walk with easy access to downtown Lisbon. It also stands close to the private Gulbenkian Museum and the Lisbon Zoo. 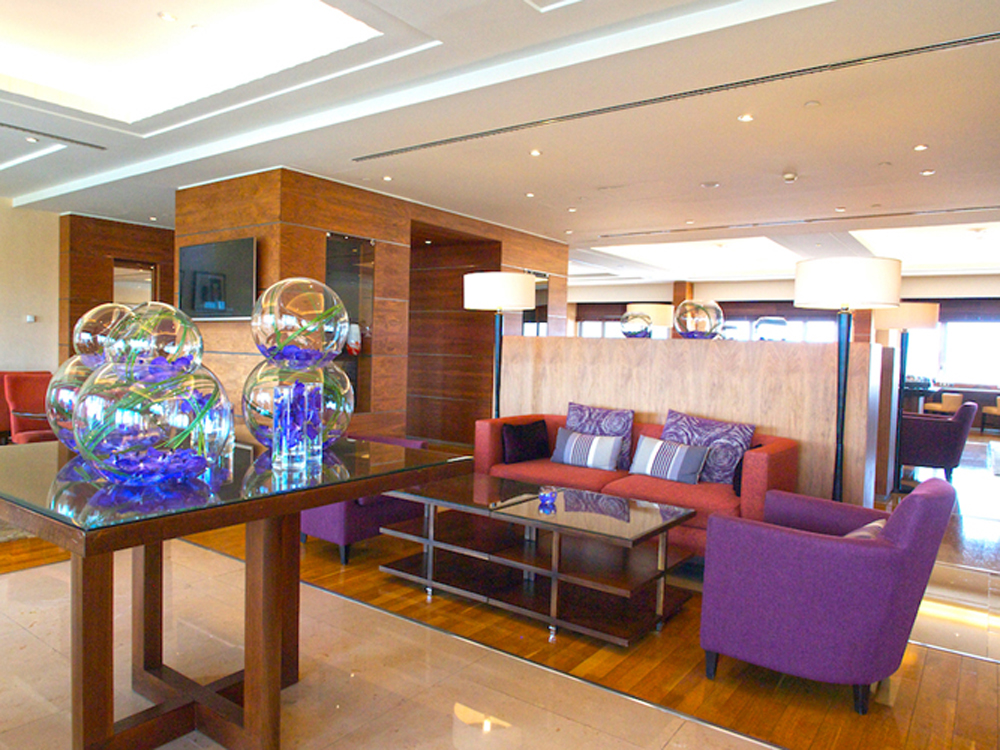 Having an impressive 518 rooms, 24 of which are suites – with exclusive access to ‘Executive Club’ facilities such as breakfast, as well as canapés and drinks throughout the day – the hotel has three separate entrances, handy when dealing with large corporate groups.
The lobby, renovated by London-based interior designers Goddard Littlefair, is spacious and well lighted, its walls and furnishings the work of mostly local artisans. For its 10th anniversary celebrations last year, the hotel commissioned three local artists, whose creations now adorn its walls. 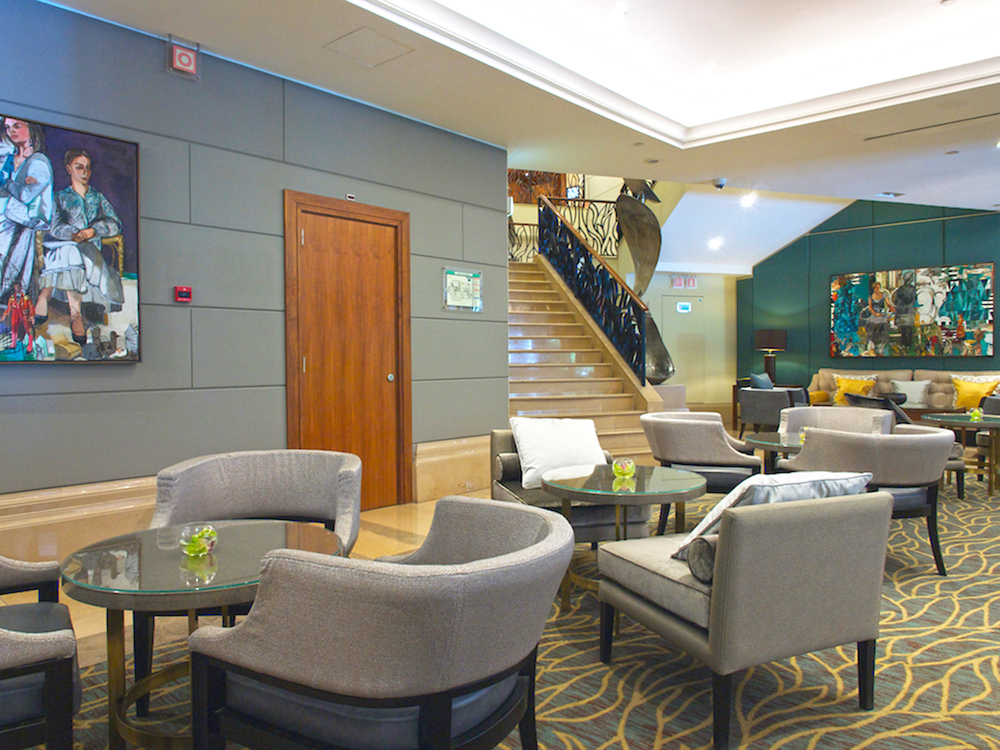 Deep, lush carpets and rugs throughout are the work of Ferreira de Sá in northern Portugal while tooled leather panels, echoing the city’s craftsmanship traditions, adorn the reception desk. The origins of a large silver fish design over an archway on one side of the lobby remain a mystery.
Our suite offered wonderful views over the city, even prettier by night, the Monsanto Nature Park and a soaring 18th century Aqueduto das Águas Livres (Aqueduct of the Free Waters), as well as a most seductive electronic massage chair.

With corporate clients providing most business, though the tourism sector now accounts for more than 40 per cent according to officials, the hotel has developed a series of 18 meeting rooms on the first floor. With partitions fully open, the main meeting room, the Floriana can accommodate 850 people seated theater-style while the total conference area accommodates up to 1,400 people. There are also two boardrooms in the Sky Lounge on the 24th floor.

Not everything, however, at the Corinthia is work-related. Those seeking relaxation and physical fitness opportunities are well catered for through restaurants, including the ‘Sete Colinas’ (named after Lisbon’s nickname ‘City of the Seven Hills’), the spa and gym. British-based ‘Holmes Place’ manages the latter two on the second floor on a 3,500 square metre area. The company, which was involved recently in a marathon Zumba workout for 9,000 Lisbonians, manages around 80 gyms, 18 in Portugal, and is launching a full series of classes at the hotel this year, including challenging ‘anti-gravity’ workouts. The spa itself features 17 treatment rooms, two of which are for couples, a heated indoor pool, and an ‘acqua’ area with hydrotherapy pool, Jacuzzi, sauna, steam bath, cold plunge, bucket shower, ice fountain, sensory showers and cooling walk.

After exploring Lisbon, the spa’s special ‘World of Travel’ massage is most attractive, easing tired legs, back and shoulder muscles while you inhale natural relaxing oils meant to transport you to the countries the oils are named after.

Due to other social commitments we were unable to dine at the Corinthia, we did, however, enjoy a long, leisurely buffet lunch in its ground floor Típico restaurant, and rate our culinary experience highly. With plenty of clear natural light from a complete floor-to-ceiling window surround, it is capable of hosting 350 people inside or alfresco on the terrace beside a soothing water feature. A nearby chef’s herb garden guarantees fresh seasoning. 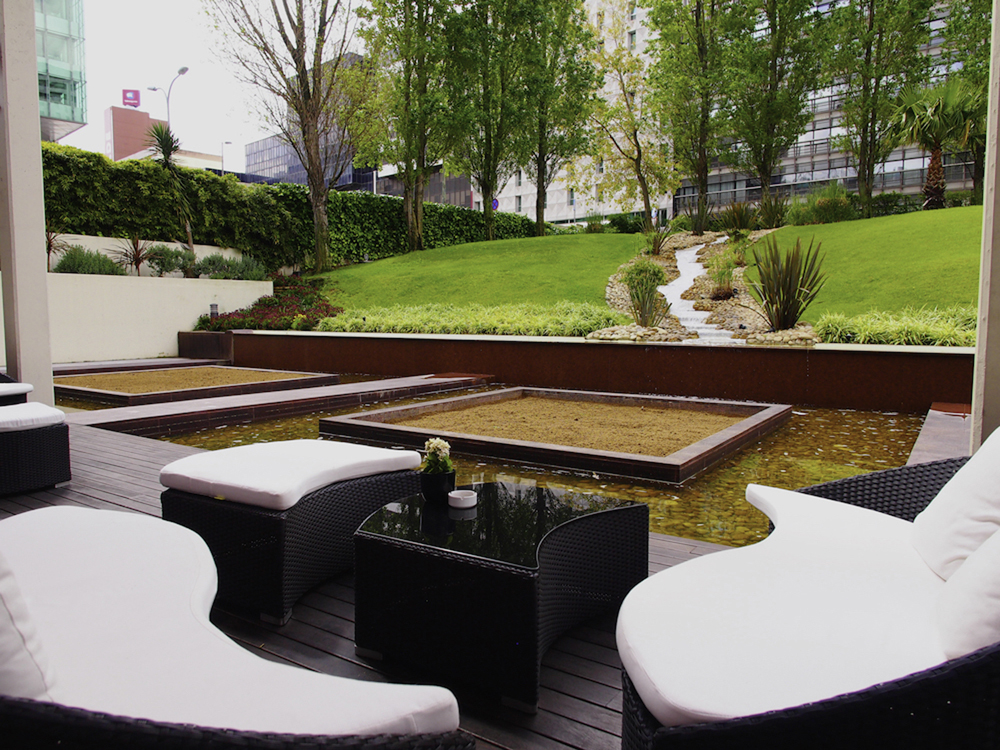 Most tastes are satisfied here, with both buffet and a la charte menus offering a gargantuan choice of more than 30 items, ranging from green cabbage soup with sautéed chourizo to red risotto with grilled grouper and traditional pork ‘Cataplana’ – tenderloin and clams braised with white wine, onion, tomato and bell pepper. The rotisserie alone changes daily, with, for example, leg of lamb on Mondays and orange-flavored roasted duck the next day.

For a hotel offering high-quality service, a spacious spa and gym and convenience to downtown Lisbon without the annoying city hustle and bustle, it would be hard to find something better than the Corinthia Hotel Lisbon.