No visit to Belfast is complete without a seeing a show in the northern Irish city’s premier performing venue – the Lyric Theatre – and especially during the holiday season, with dual shows running into January.

Every year at this time, it hosts a special-written play that family and friends can enjoy that is light-hearted, uplifting and often thought-provoking. The focus of this year’s production, ‘Mistletoe & Crime,’ written by Marie Jones, best known for the award-winning ‘Stones in His Pockets,’ is a Belfast police station and situations that might conceivably arise over the hectic period that is Christmas.

The central feature in a cleverly-designed set is the reception desk of the station itself but creative use of lighting as well as moving partitions and props – including two police bikers who ‘cycle’ on to the stage pushed by a stagehand with a trolley – means scenes change frequently.

Characters are both colorful and diverse. Among them, a homeless man who, in a determined effort to get arrested and enjoy a warm night in jail, climbs to the top of the city’s giant Christmas tree; a Latvian woman who, with her pet cat, is thrown out of her apartment by her angry partner; and a petty thief who sells illegal liquor out of a makeshift hut.

The ‘authorities’ themselves feature characters with multi-layered backgrounds. Two policewomen, played by Katie Tumelty and Tara Lynne O’Neill, around whom much of the action revolves, are contrasting personalities – one, younger, naïve and nervous on her first night on neighborhood patrol has always dreamed of a career in uniform but is concerned for her husband who has being made redundant while her more experienced and cynical colleague on the beat is working a last shift on the job after 20 years and wrestling with the emotional turmoil of an affair with a married detective.

The unfortunate inequities inherent in money and power are blatantly aired when a pompous barrister derides the two policewomen for not doing enough to find his lost mother and calls in a favor – an expensive helicopter search – from the police chief.

In terms of comedy, Ciaran Nolan is the star.

His high-pitched impersonation of Haribo, the hapless homeless man trying his best to be arrested is hilarious and he is equally adept in another role as the pernickety, officious guardian of a temporary shelter for drunks.

A second actor, Mathew McElhinney, carries off his dual roles as a cocky, petty thief and the streetwise, illicit drinks seller very well. 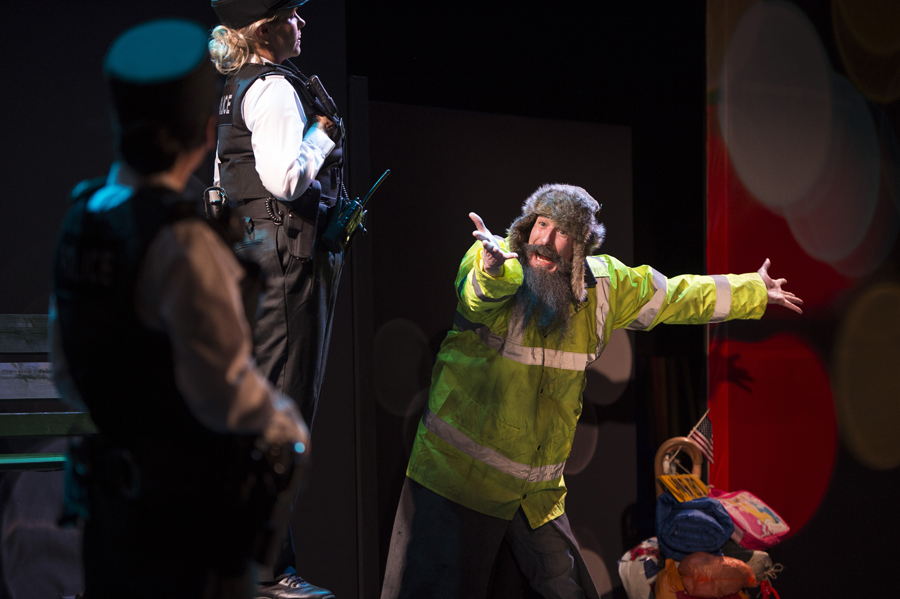 While ‘Mistletoe & Crime’ is not as captivating or comedic as previous Lyric seasonal offerings such as ‘Forget Turkey! (We’re Going to Phuket this Christmas)’ – in part because of a dilution effect – too many disparate themes and characters and not enough depth to any – the play offers a festive and light-hearted evening out.

While there are references to Belfast situations and personalities, being unfamiliar with the social landscape isn’t a major obstacle to an overall understanding of the show as many of the conundrums depicted are universal.

The show is directed by Dan Gordon, set designer and scenic painter is Stuart Marshall, costume design is by Erin Charteris, lighting designer is Paul Keogan and sound designer and composer is Garth McConaghie. The show runs until January 11.

The Lyric Theatre will also stage its version of ‘Sleeping Beauty,’ written by Derek O’Connor, with music and lyrics by Conor Linehan and direction and choreography by Deborah Maguire, until January 4.