Just like so many of you, when December came along I started musing upon what to buy my better half as a perfect seasonal gift. Knowing she adores perfumes helped greatly. As did traveling in Ireland.

The Emerald Isle, as its known, evokes many classic images, from castles to rugged coastlines, from whiskey to fiddles, tin-whistles and harps. But to my pleasant surprise, a new nation is emerging, with young, creative and daring artists making a name for themselves in the highly competitive world of international fragrances.

That’s how I found out about ‘Memo’ and ‘Roads,’ two perfume collections originating in Ireland, both inspired by the notion of travel and memories, both unique and contemporary. 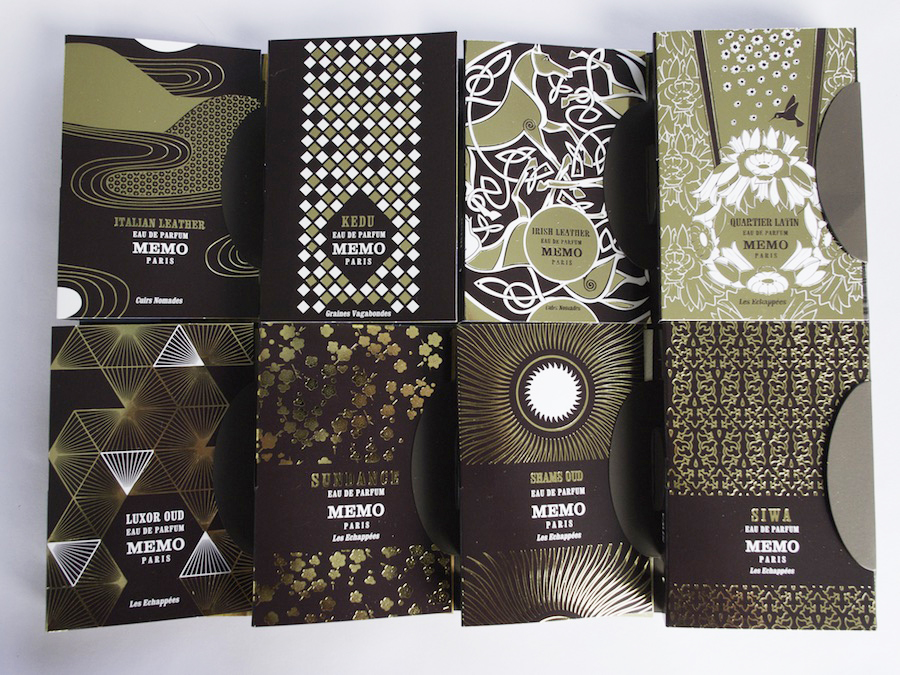 Clara and John Molloy are the founders of ‘Memo,’ a collection of eighteen fragrances with the latest, ‘French Leather’ launched just this year, its key notes being lime essence, rose essence and suede.

The fragrance is inspired by the urban landscape of Paris and its essence is Clara and John’s vision of what being French means – being deceptively casual, not quite nonchalant; a certain style; taking trivial things seriously; the glimpse of a shoulder; charm; knowing the right moment to undress; a kiss… 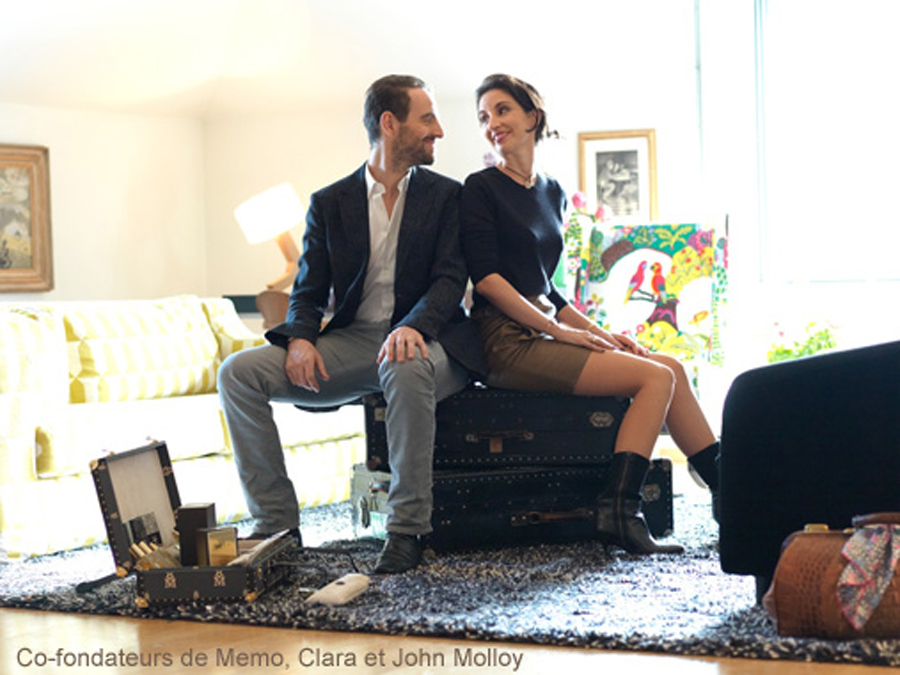 Originally from Andalusia and a book publisher by profession, Clara now owns a fragrance boutique in Paris and worked with nose Alienor Massenet to create perfumes inspired by her and her husband’s travels and memories of aromas experienced during those trips.

She launched her own brand after publishing a book about noses and the perfume industry in general entitled “22 Perfumers” while Alienor had previously worked for International Flavors & Fragrances, Inc. (IFF) in New York and created ‘Antidote’ by Victor & Rolf; ‘Jasmin’ by Armani Prive; ‘Only the Brave’ by Disel; ‘Eau de Fleurs’ by Chloe; ‘Parlez-moi d’Amour’ by John Galliano; ‘Tresor in Love’ by Lancome; and ‘Intuition’ by Lauder. 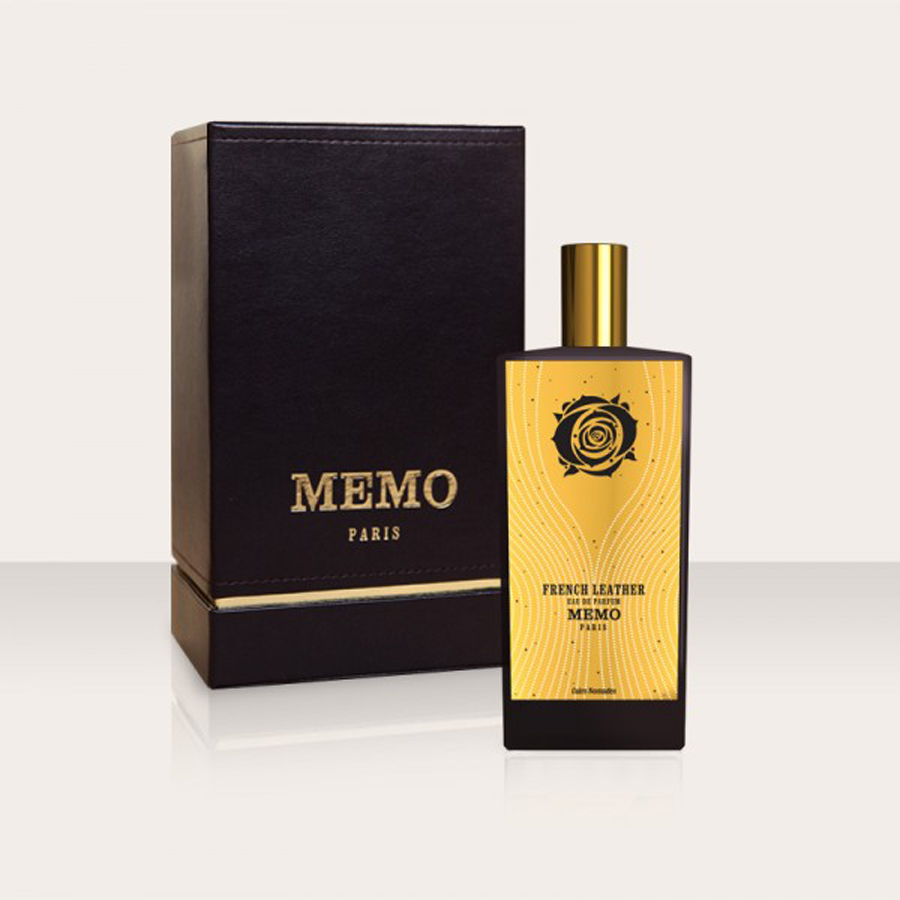 John, who grew up in the bucolic Irish countryside, surrounded by horses, is in charge of the business side, with his experience as a former executive at L’Oreal and LVMH a major asset. “I was brought up in Tipperary and my father was a horse-breeder so Ireland is close to my heart as it is to Clara’s who, though Spanish, loves it also. 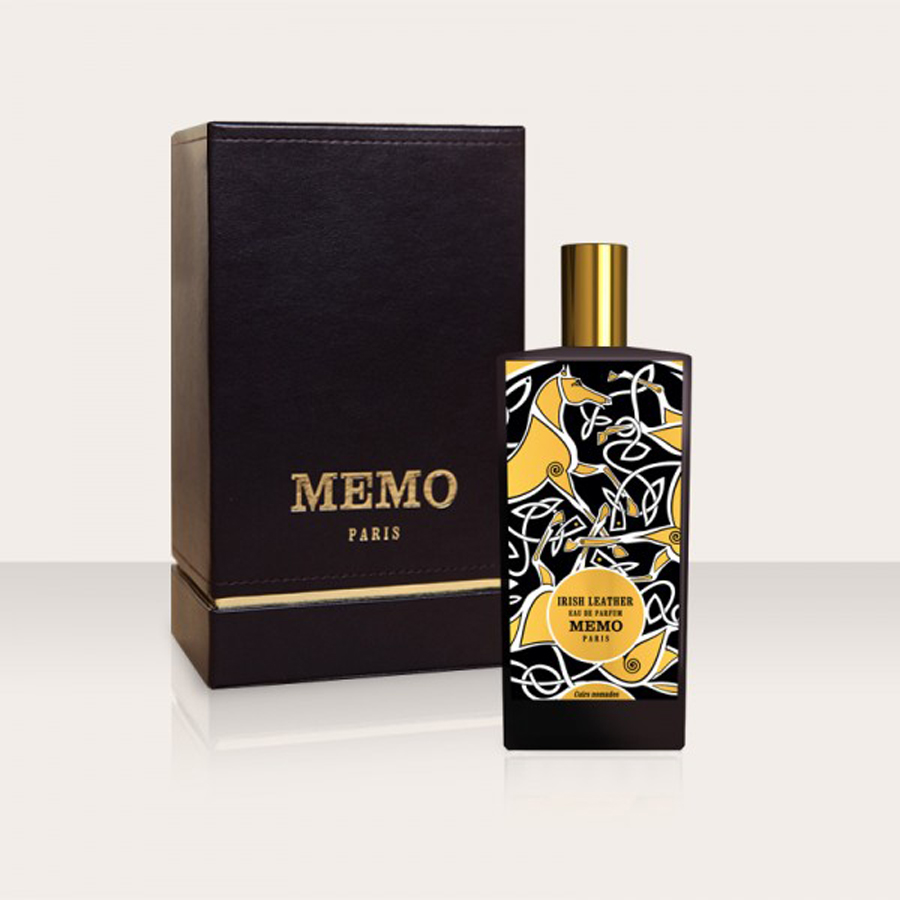 In ‘Irish Leather,’ we have a created a scent which captures our experiences here. Imagine Tipperary, a hot misty Irish summer morning, horses coming in after a gallop, their odour fresh like wind through grass and the warm scent of leather,” he explains poetically.

For seasonal gifts, ‘Memo’ offers several special sets such as a limited edition of ‘Escales Extraordinaires’ (‘Irish Oud,’ ‘Shams Narcissus’ and ‘Moon Leather’ perfumes) in gold-colored, lacquered bottles encased in brown leather cases, and an accompanying book by Clara illustrated by French artists, relating how each fragrance was inspired; as well as suggested stocking-fillers of leather-wrapped purses containing miniature perfumes for the ‘Les Echappees’ collection and ‘Irish Leather,’ ‘Italian Leather’ and ‘French Leather.’ 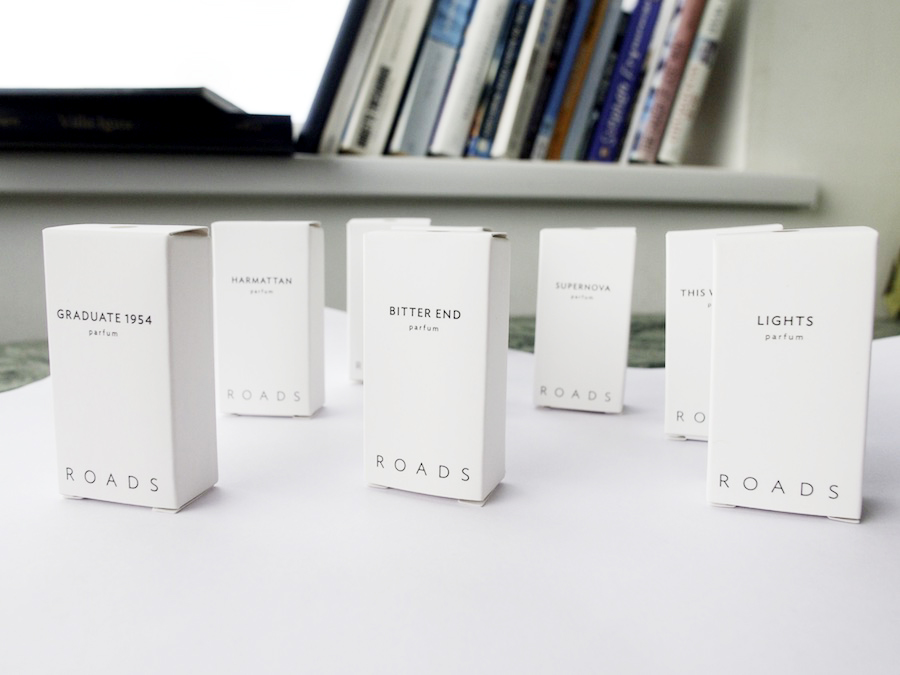 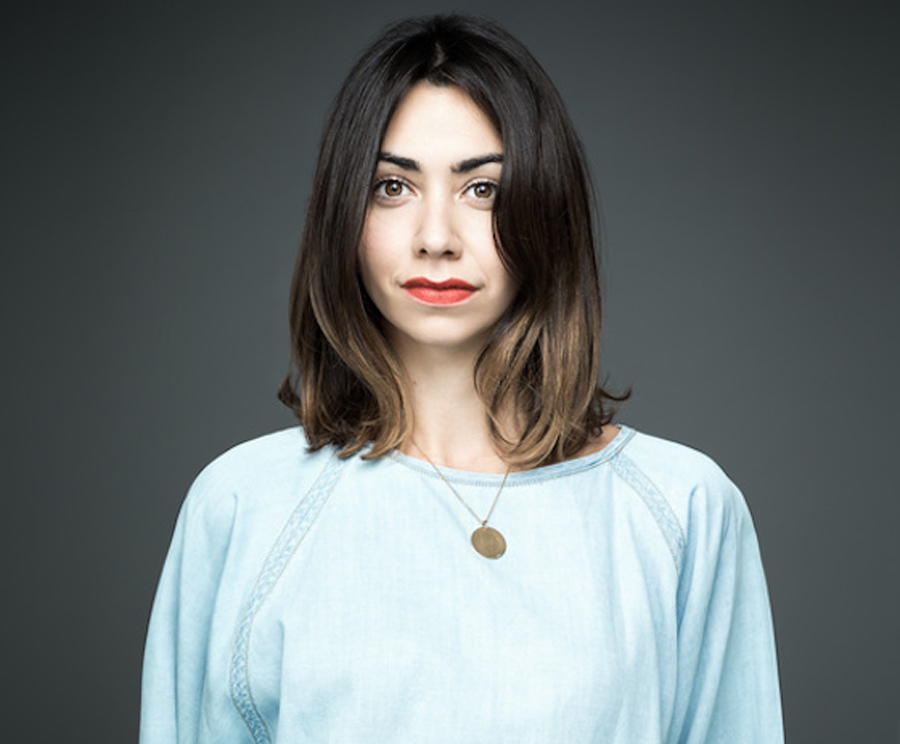 It was while setting-up her Academy and collaborating with artists in design and communication that Danielle developed the concept for ‘Roads.’

“There are many reasons why I created ‘Roads’ but, above all else, I wanted an artistic brand not be limited by its own definition, not pigeonholed or confined to only one idea,” Danielle says. “One that would develop and grow according to our customers’ interests so there is no limit to its potential.” 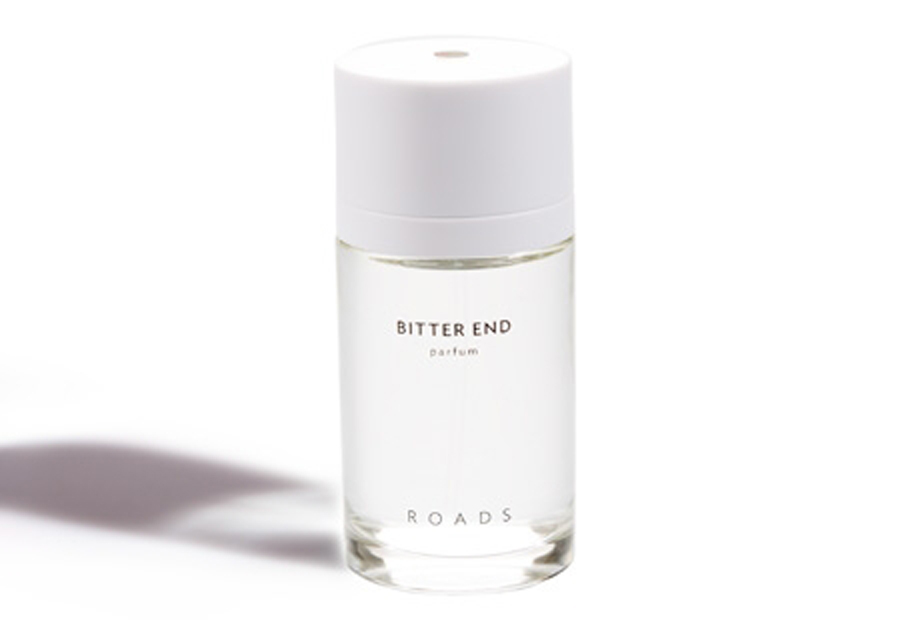 She added, “Each of the ten fragrances reflect different stories. One best-seller is ‘Harmattan,’ about a trade wind that crosses the Sahara once a year and another, about technology, called ‘White Noise,’ which shows that everything can be an inspiration for a fragrance. Another called ‘Bitter End,’ is about Western Ireland, while ‘Graduate 1954’ is about the journey people have made since the 1950s, particularly women, and how – due to limited freedoms – they had to use their femininity to achieve their goals.  We don’t need to do that now but it’s still a powerful tool to have.” 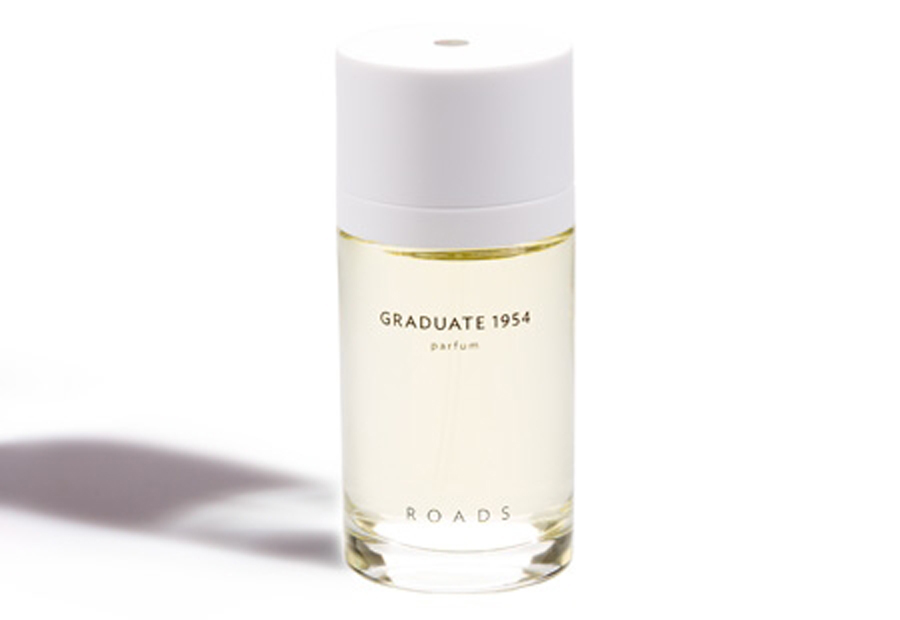 Danielle, who tries to make all her fragrances unisex, is proud of what she has accomplished, whittling down 150 proposed fragrances to her final 10.

What’s next? Danielle’s working on a new set of fragrances focusing on modern Africa, and turning the project into a family affair by having her two young children involved in researching the region for inspiration.

Both collections are sold internationally, including the United States.