After feasting on tasty patisserie, fine wines and French gourmet food, fancy something different in the City of Light?

An evening’s entertainment at the ‘Le Crazy Horse’ or the ‘Moulin Rouge’ in Paris might just be the ticket.

The ‘Féerie’ show at the ‘Moulin Rouge’ involves between around 40 male and female dancers on stage (often altogether) dressed (sometimes not so dressed) in costumes ranging from flamboyant ostrich feathers to transparent silk to colorful military uniforms. The performances make for a wonderful experience, transporting one back to the days of the late 19th century La Belle Époque and Henri de Toulouse-Lautrec. 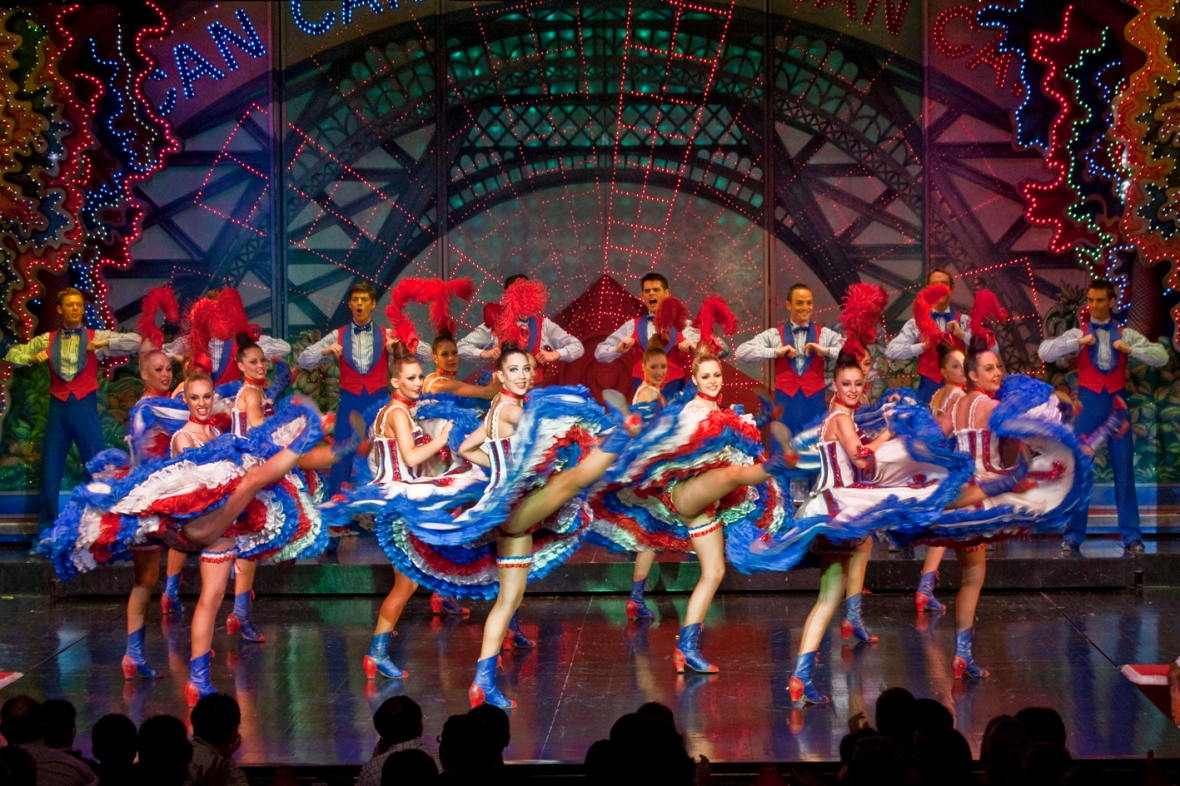 There’s something for everyone in these dazzling, well-choreographed routines: dancers as pirates complete with a ship on stage; in flowing Turkish robes and scanty belly-dancing outfits in a sultan’s palace; or in multi-colored costumes of gold, blue, red, green and yellow in a Chinese setting.

There seems no end to the costume changes, with female dancers as tigers; at a masked ball; another resembling Medusa, the face of protection in Greek mythology; musketeers; and as Cossack and Russian dancers.

The show, in part, chronicles the various epochs of Paris history, with drunken ‘women of the night’ with art nouveau background decor indicating the early 1900s; US solders à la World War Two in Paris; an American boogie-woogie music routine; a potpourri of traditional songs including ‘I Love Paris,’ ‘Sur les Ponts de Paris’ and ‘À Paris’ and a modern ‘Hard Rock’ routine with sizzling dancers in sexy, leather outfits and matching boots, singing “I Will Survive’ welcoming the audience to sing along.

There’s even an amusing skit from twin sisters dressed in a single large body stocking and ‘Olga and her Lions’ – the lead ‘trainer’ dressed in red stripes with a whip and six female, leather-clad dancers with fluffy heads.

Emphasizing the fantasy aspect of the show, in one scene two dancers float above the audience singing a dream-like, romantic duet. 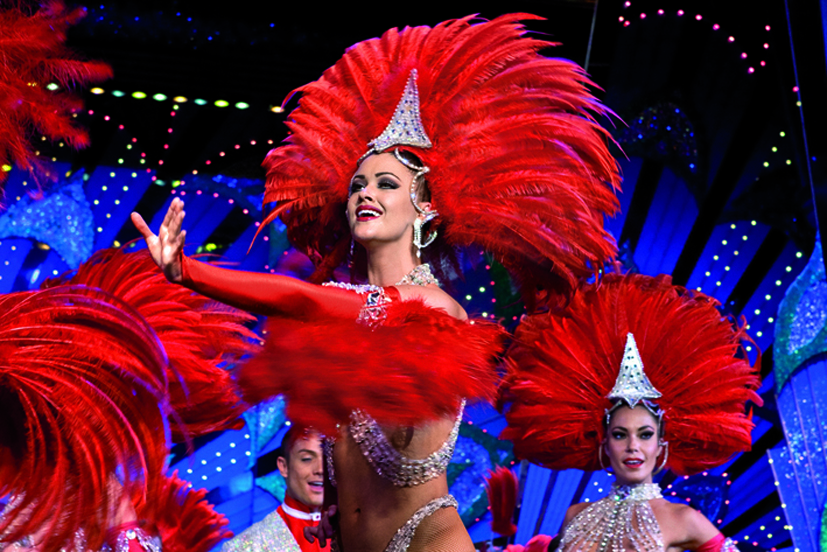 While the show consists primarily of a series of impressive dance performances, breaks between them are provided by other, varied, non-dance related entertainment. Take for example, an excellent ventriloquist with his funny ‘talking’ companions – a crow, a wolf and a poodle, who attempts to sing a high-pitched version of Louis Gasté’s well-known song, ‘Feelings.’ Audience participation fun includes the ventriloquist bringing on stage random members of the audience to interact with the puppets.

Highlight to the Moulin Rouge evening, of course, is an ear-splitting, physically-impressive performance of the traditional, high-kicking ‘Can-can’, with 20 male and female dancers, the latter in long skirts, petticoats and black stockings in the French tricolor (the girls of moulin rouge about 12 of them and 8 boys plus two very flexible ones) flinging their bodies into and air and across the room with ‘split’ landings that make audiences stare incredulously. The show’s producer is  Jacki Clerico; creators are Doris Haug and Rugerro Angeletti; and choreography is by Bill Goodson.

In contrast to the more traditional ‘Moulin Rouge,’ ‘Le Crazy Horse’ hosts a more contemporary show entitled ‘Désirs’ where some performers, every bit as beautiful and athletic as in the former, utilise modern technology in their acts. The result: reflections and images meeting in a kaleidoscope of colors and textured designs.

Directed by international choreographer Philippe Decouflé, one routine involves the creative use of mirrors and simple hand movements; another features scanners used in everyday retail outlets; a third depicts a female dancer acting the role of a ‘tipsy’ maid dressed in a sassy outfit who wipes away images projected on a curtain with her duster; and a fourth featuring the imaginative interplay of light and shadow on a dancer’s body. The show’s artistic direction is photographer Ali Mahdavi.

Show highlights also include a challenging solo performance by a female dancer who enters the stage from above, dangling from a series of ropes, and creates intricate patterns by interchanging them across and over her limbs and head. Characteristic of the show’s contemporaneity is another solo routine in which a female dancer imitates an increasingly frustrated financial analyst at he desk trying to make sense of a plethora of printed accounting reports.

Complete with a flute of champagne- or another drink of your choice – both ‘Moulin Rouge’ and ‘Le Crazy Horse’ provide exceptional entertainment and a welcome addition to any vacation in the City of light.