Location, location, location – if what property experts tell us is true then the Grand Hotel Du Palais Royal on Rue Saint-Honoré in central Paris couldn’t be much better placed.

Standing on our narrow balcony on the fifth floor, to the right – a delightful view along the rooftops to the ornate, white bulb that is Sacre Coeur in the Montmartre area; and to the left, over the Louvre, France’s most renown museum. A short, three-minute walk brings one into the heart of the fashion district, to the Louvre’s famous glass pyramid, the Comédie Française and to banks of the Seine. 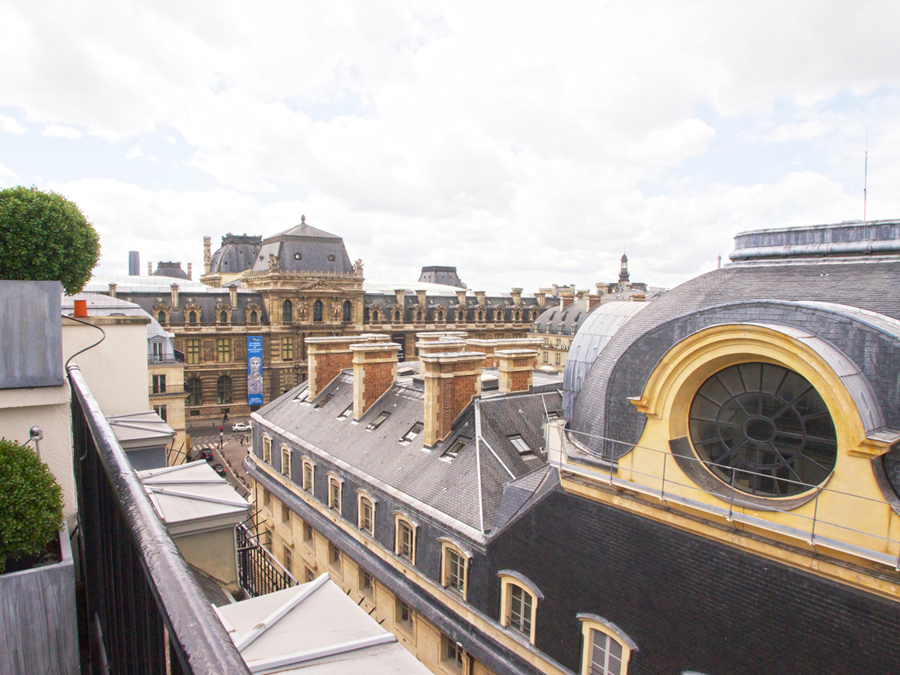 Not a bad panorama, eh!

Inside, our room – while not spacious – provides all we require for a comfortable sojourn: a large double bed; a comfortable soft sofa with oblong metal and glass coffee table for drinks; a sidewall desk for writing (with a Magimix espresso machine); plenty of cupboard space; and a bathroom with separate shower and bath either side with Carita toiletries. The room design, reflecting the hotel’s general interior design by Pierre-Yves Rochon, can best be described as ‘modern, minimalist and chic.’ The color scheme is neutral, simple and subdued: white walls and gleaming metal and mainly black furnishings (Italy-based Knoll, as well as Eames and Pierre-Yves Rochon) including television, coffee-maker, bedside tables, a recliner and lamp-stands. Other touches include a brown and beige carpet, ash-gray curtains and ceiling mouldings. Some rooms have fine views over the rooftops and on to the streets below. 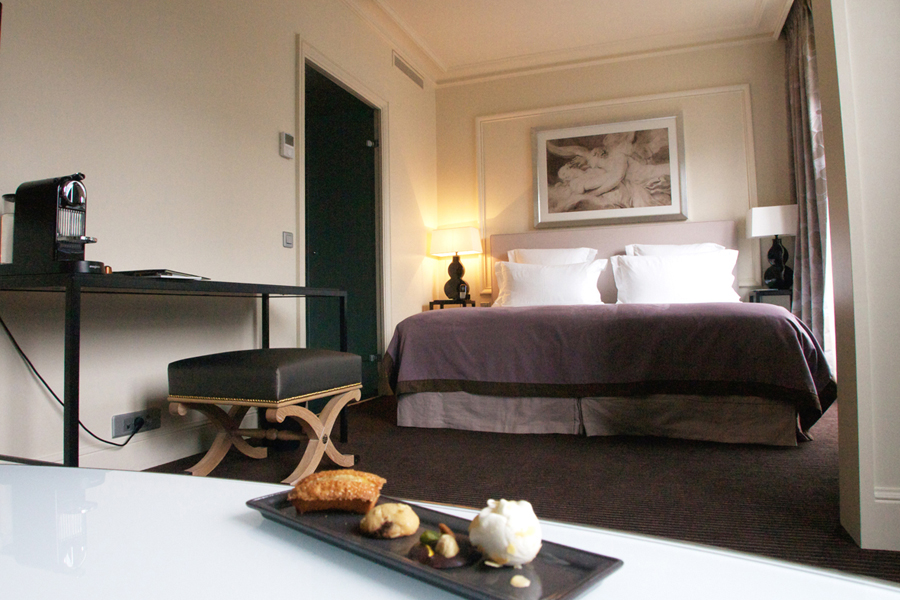 Ironically, the 5-star Grand Hotel Du Palais Royal, nestled inside an 18th century building, is not ‘grand’ in sheer physical scale, being only 68 rooms, with five categories, and suites, including two signatures, in 6-floor, corner building. But what it lacks in vastness, it makes up for in charm. Take, for example, the elevator. Stepping inside, one is delightfully surprised to face a full-length, lighted, glossy photograph of a classic Parisian leafy street scene. As homage to the neighboring Palais Royal Garden, plants and freshness are the keynotes of the hotel, with a winter garden, a grand exotic tree in the entrance, light-colored wood and hints of lime green in the fabrics used. 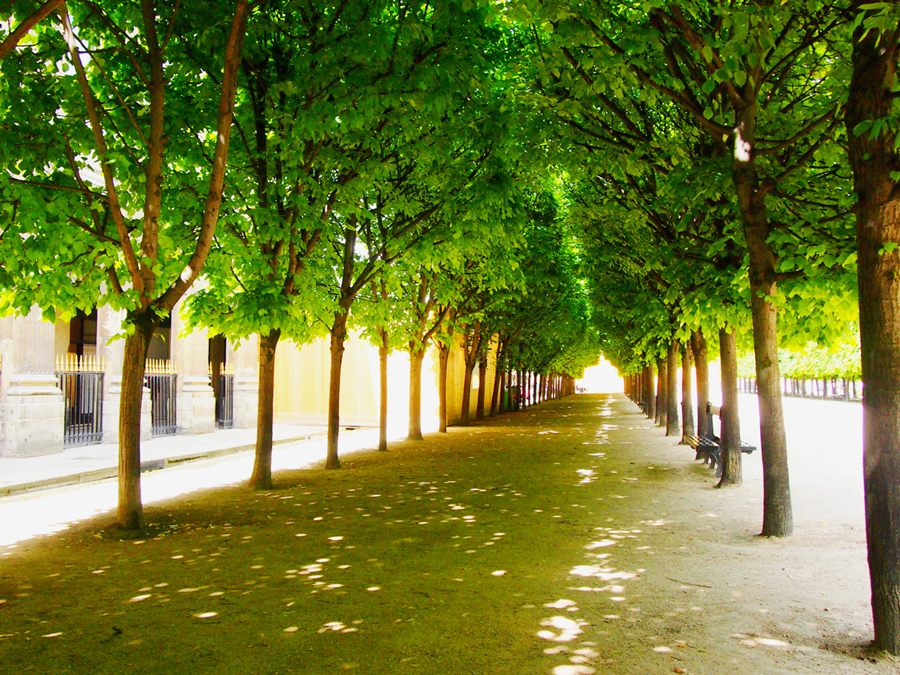 Having hosted a soft opening last August after 18 months of renovation, the hotel’s interior reflects Parisian cultural history with busts of French authors and philosophers, including Voltaire, Rousseau and Diderot outside its open bar area (parts of the hotel building are designated historical monuments as the hotel was once known as ‘le Théâtre de l’Opéra’). A characteristic of ‘Le Bar,’ as it is simply called, is the many drinks made from champagne with Dom Perignon, Krug, Grand Siecle and Dom Ruinart among the many brands it serves.

The walls of the lobby display paintings linked to the Comédie-Française. The hotel owners, the Marang, a French family, also own the four-star Powers Hotel, a block from the Champs Elysees. Many concierge staff are members of ‘Les Clefs d’Or’ (The Golden Keys) and the hotel provides a printed guide offering suggestions of exhibitions to see and places to eat.

Each floor of the Grand Royal exhibits copies of works by different artists. For example, Georges Braque is featured on the 5th floor and Matisse on the 4th. There is also a series of black and white photographs of everyday Parisian street scenes. The staircase linking all the floors is from the original building and is over one hundred years old and some of the corridors have a combination of classic and contemporary wallpaper. A small business center stands near the restaurant and opposite is a hairdressing and nail salon.

The restaurant, where breakfast is also served, is a compact, intimate space located deep within the interior of the hotel, with a decorative series of macaroons, handcrafted at the Louvre, on the wall beside its open doorway. Subdued lighting and full-length wall mirrors give the room a sense of space. 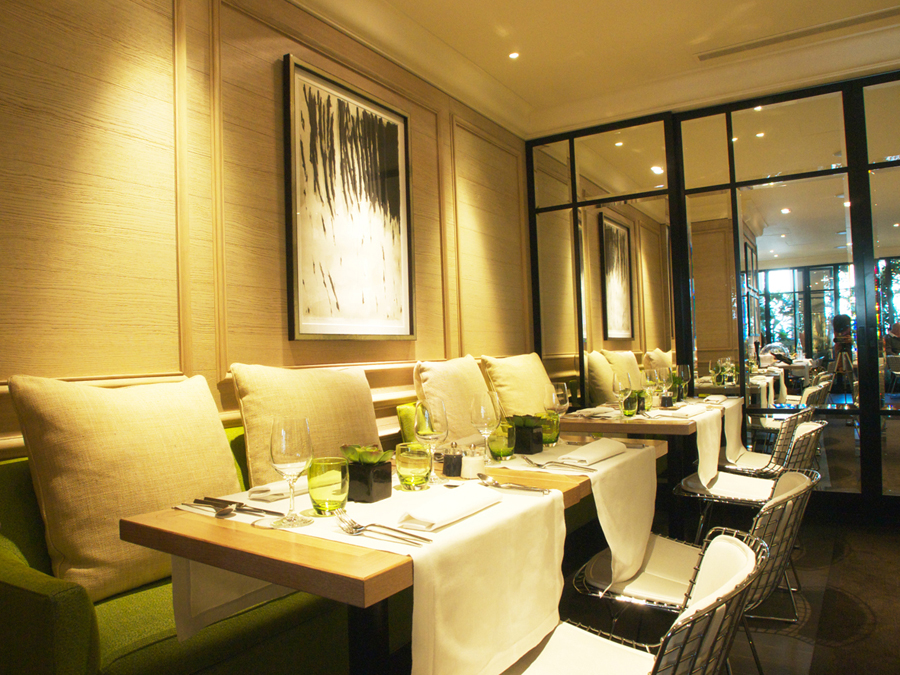 Indicating the gardens of Palais Royal just outside, the restaurant has touches of green, including vegetation outside glass-fronted interior walls, green-colored glasses on the tables and curtains with leaf design. Breakfast is buffet-style, ample and varied, featuring seed as well as dried-fruit bread and croissants, Beillevaire butter (made from freshly churned raw milk in Normandy), sausages with a filling of herbs, three varieties of ham and four different cheeses, as well as seasonal strawberry tart.

Chef Jean Yves Bournot presents a menu strongly based upon seasonal produce for the ‘Lulli Restaurant,’ including a tasting option beside the à la carte one. The overall impression is of a delightful variety of meats, fish and seashells, paired in a most creative way to result in gourmet experience worthy of the classy establishment. For example, asparagus was served with rich, nutty Shimigi mushrooms, marrow and parmesan that, together, created a delightful umami experience. 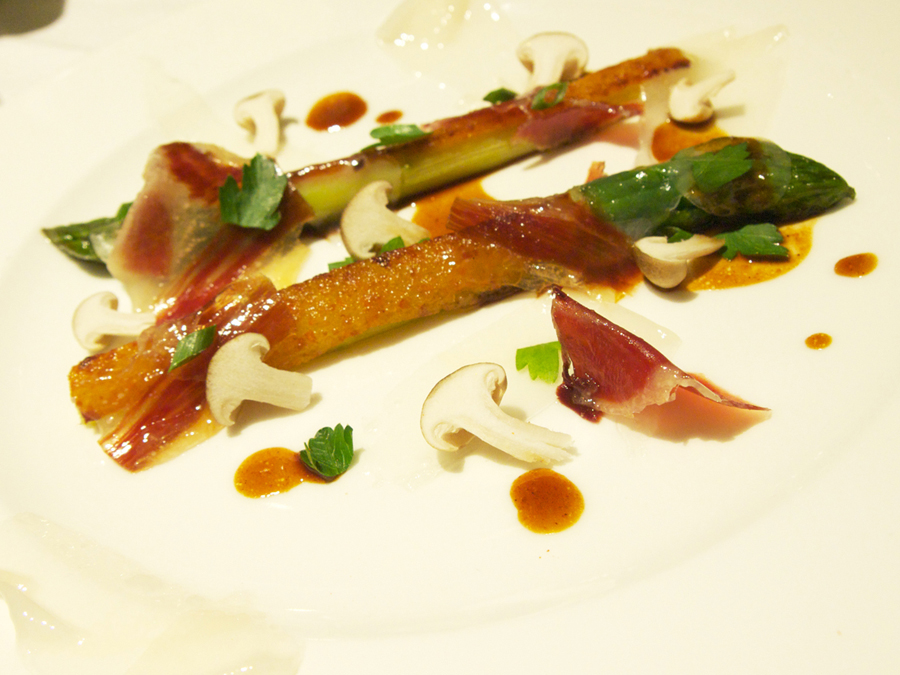 Also, the addition of ficoide glaciale, or ice plant, with its crunchy and slightly acidic taste and shimmering dot appearance, together with sweet vanilla, made the John Dory (butterfish) almost melt in one’s mouth. For another main dish, seared foie gras accompanying Black Angus steak, served rare with just a sprinkle of sea-salt, made for a perfect Tournedos Rossini dish.

In the basement, the hotel also has its own exclusive Carita spa, a large Turkish bath with a Sicis brand of mosaic and a small fitness room with a range of exercise equipment and tailor-made coaching programs. 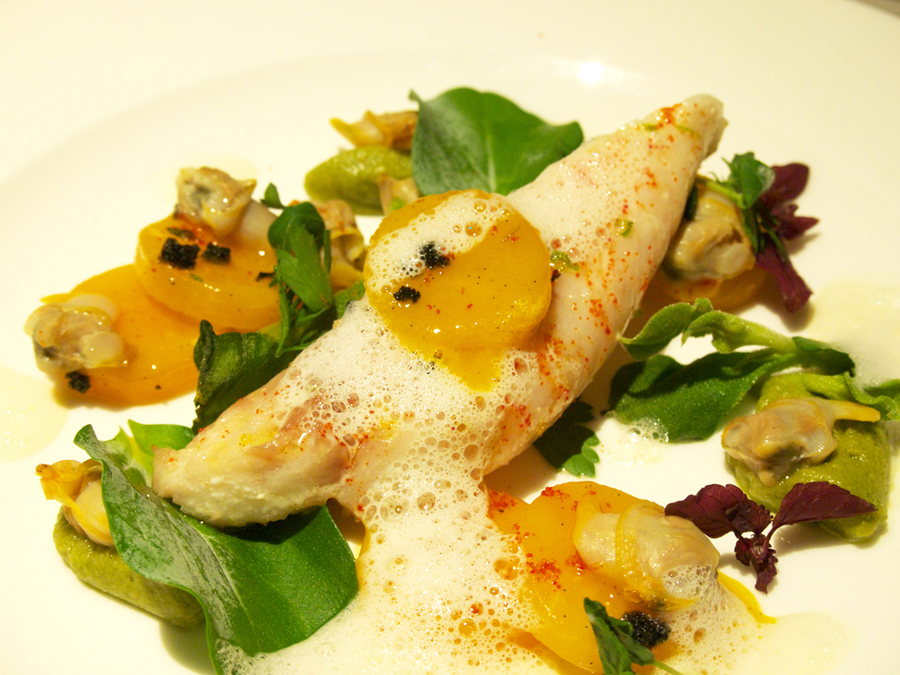 Proud of its environmental achievements, the hotel has been awarded the ‘Green Key,’ an important international hospitality recognition for quality management of waste, water and energy.

With its eclectic mix of historical elegance and chic modernism combined with its central location, the Grand Hotel Du Palais Royal offers visitors a wonderful introduction to the ‘La Ville-Lumière’ (the City of Light).