When Prince Roland Bonaparte, explorer, geographer, botanist and grand-nephew of the famed French emperor made this present-day hotel his home, he probably didn’t imagine his passion for travel would live on – through the exotic flavors now emanating from the kitchen of La Bauhinia Restaurant.

Hosting guests throughout the day, for breakfast, lunch and dinners as well as afternoon tea, it is one of the three eateries at Shangri-La Hotel Paris and is built as a rotunda with a 1930s Eiffel Tower-inspired steel and glass skylight supporting an impressive Murano glass chandelier. 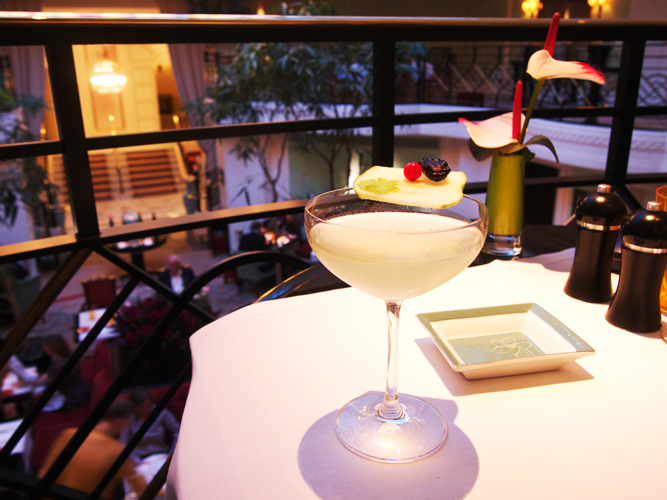 The restaurant’s name – the orchid tree flower which appears on the Hong Kong flag – is a tribute to Prince Bonaparte’s all-consuming interest in botany and his 2.5 million samples in his herbarium.

Enhanced by a floral ambiance, oriental paintings and copies of ancient Asian manuscript-inspired wallpaper, the décor is in warm red and jade tones with large natural plants creating intimate spaces between tables. Chinese vases decorate the perimeter. One floor overlooks the other, with outer tables around its gleaming, black metal rim, as well as inner tables along the wall. Tall, slender ficus trees with sparse foliage on top lead the eye upwards to a giant chandelier and a cupola partially wrapped in a beige netting. A single, lipstick red cala flower decorates each table. 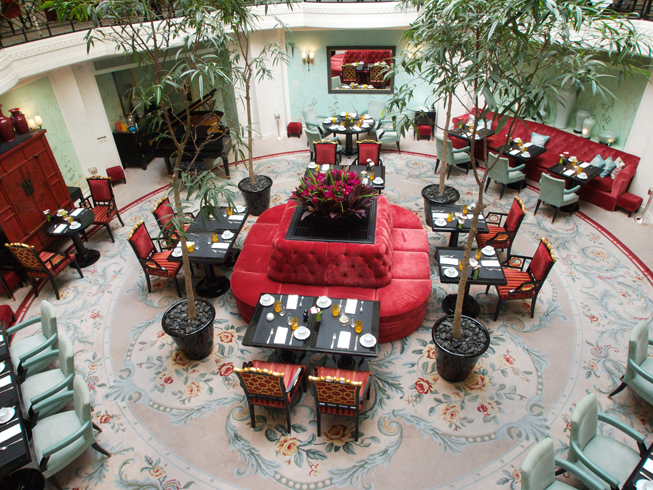 Focusing on fresh, quality products, chef Philippe Labbe describes his cuisine, in a rather self-deprecatingly manner, as “precise, with a nod to creativity and taste.” Originally from the Champagne region, the two Michelin-star chef blends within the La Bauhinia a menu whose flavors bridge the Orient and the West in a most harmonious manner.

There’s no better way to start an evening than with one of a very impressive range of signature drinks.  ‘El Ceviche’ is Beefeater 24 gin with lime, liqueur of Yuzu (a Japanese citrus fruit), coriander and bitters and comes in a champagne glass. It’s refreshingly herbal. An alternative, ‘Red Flag,’ consists of Grey Goose vodka, wasabi, horseradish, soya sauce, tomato juice and smoked salt in a tall glass. It’s spicy and wholesome.

Then it’s on to the amuse bouche  – delectable, creamy artichoke that sets the taste buds alight. 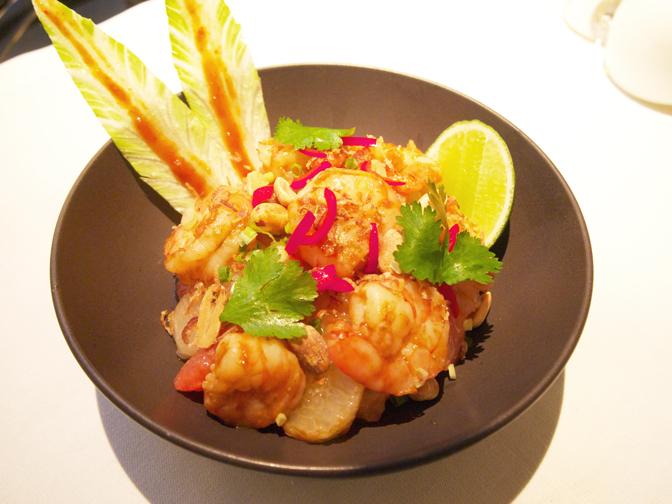 Given that the restaurant’s located in the City of Light and has a Cantonese theme, one starter of frogs’ legs in a light brown sauce with distinct Asian flavors is most suitable. They look and taste like small, tender parcels of eastern delight. A lighter option is grapefruit salad with shrimps, fresh cilantro and peanuts. If you’re fond of this particular fruit, you will truly appreciate this choice – scattered with crunchy roasted peanuts and with the shrimps plump and juicy, it is the ultimate ode to everything citrus, with generous slices of red and yellow grapefruit, a sprinkling of lime juice and a touch of spicy vinaigrette. 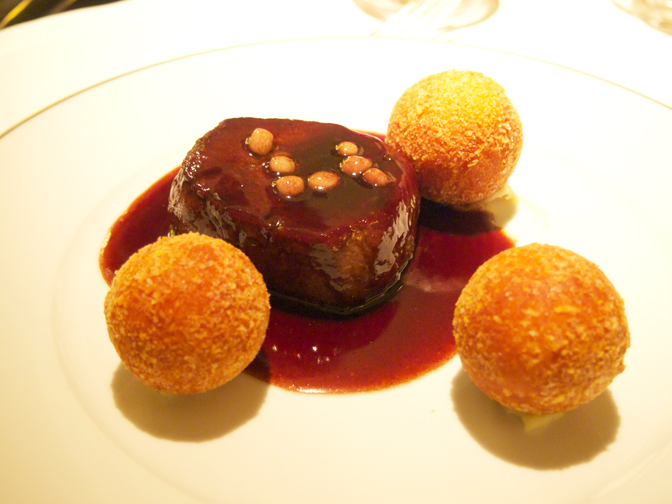 Presentation of the classic beef tenderloin chosen as one of the mains is enchanting. It’s as if being presented with a set of Baoding balls (Chinese meditation balls) on a plate beside the carefully cut meat glistening with silky sauce. That’s the visual enchantment, the taste version is even greater – the beef, soft and succulent and, the Dauphine balls, a delicate mélange of potatoes, almonds and pâte à choux (a mixture of flour, eggs and butter) – all the ingredients delicately linked together with silky marrow Bordelaise sauce.

For diners who want to venture East in their tastes, La Bauhinia’s menu offers plenty of choice, including steamed codfish with tamarind, cucuma and coconut milk; lamb shoulder fricassee with cashew nuts, coriander and ginger sauce; Asian-style burger made with minced duck and crab meat, with candid ginger and mesclun salad (a Provence mix of young salad leaves such as chervil, arugula, leafy lettuces and endive). 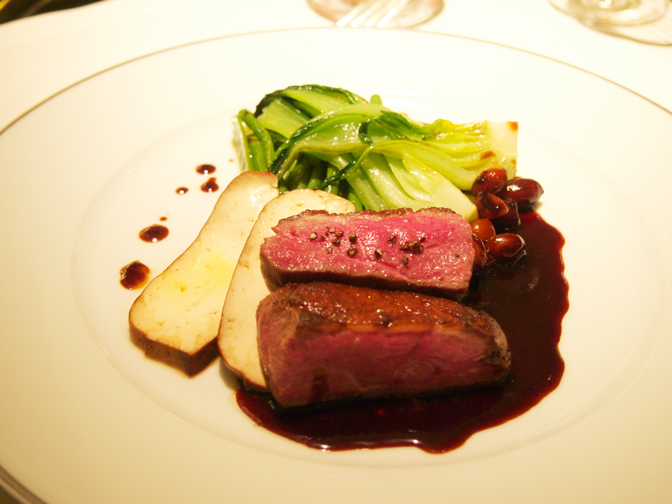 To remind oneself one is still in Paris, the classic French dessert of Millefeuille, also known as Napoleon, (how ironic considering the former owner’s family genealogy) may be the best choice. The caramelized pecan nuts supporting the scoop of vanilla ice cream is a mere minor artifice in relation to the luscious layers of vanilla custard, cream and fluffy pastry beside. 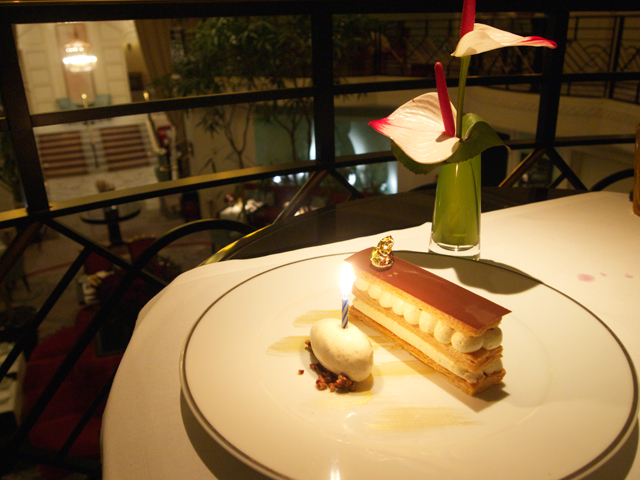 If that’s not enough to satisfy your senses, if you dine at La Bauhinia on Wednesday evenings, you can join the weekly Shangri-La open champagne party in the hotel’s main lounges – an opportunity to mingle with the young and the beautiful.