A druid’s cave, a fairy garden, an ancient wishing well and a beach studded with gemstones twinkling under the kaleidoscopic colors of the Northern Lights – sounds like the stuff of legend, doesn’t it? 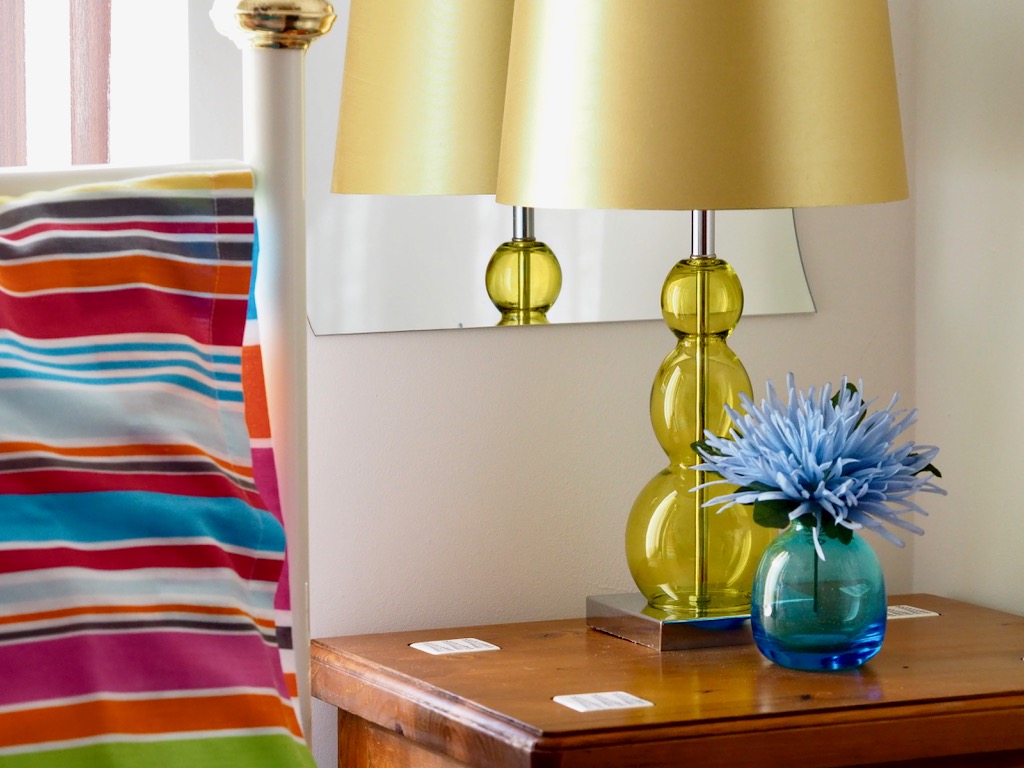 This is Donegal, where Vikki Hoffmann has her little cottage, facing the mountains and the ocean in the most northerly part of Ireland, a place so hypnotic it seduced Hollywood film-makers into shooting scenes there for a ‘Star Wars’ movie.

Being so far from mainstream political mischief in the nation’s capital, Dublin, this region is known as the ‘Forgotten County,’ and probably cherishes its intriguing mystical past more than any other part of the country and its place-names reflect that such as Banba’s Crown, Hell’s Hole, Five Fingers Strand and the Devil’s Bridge. 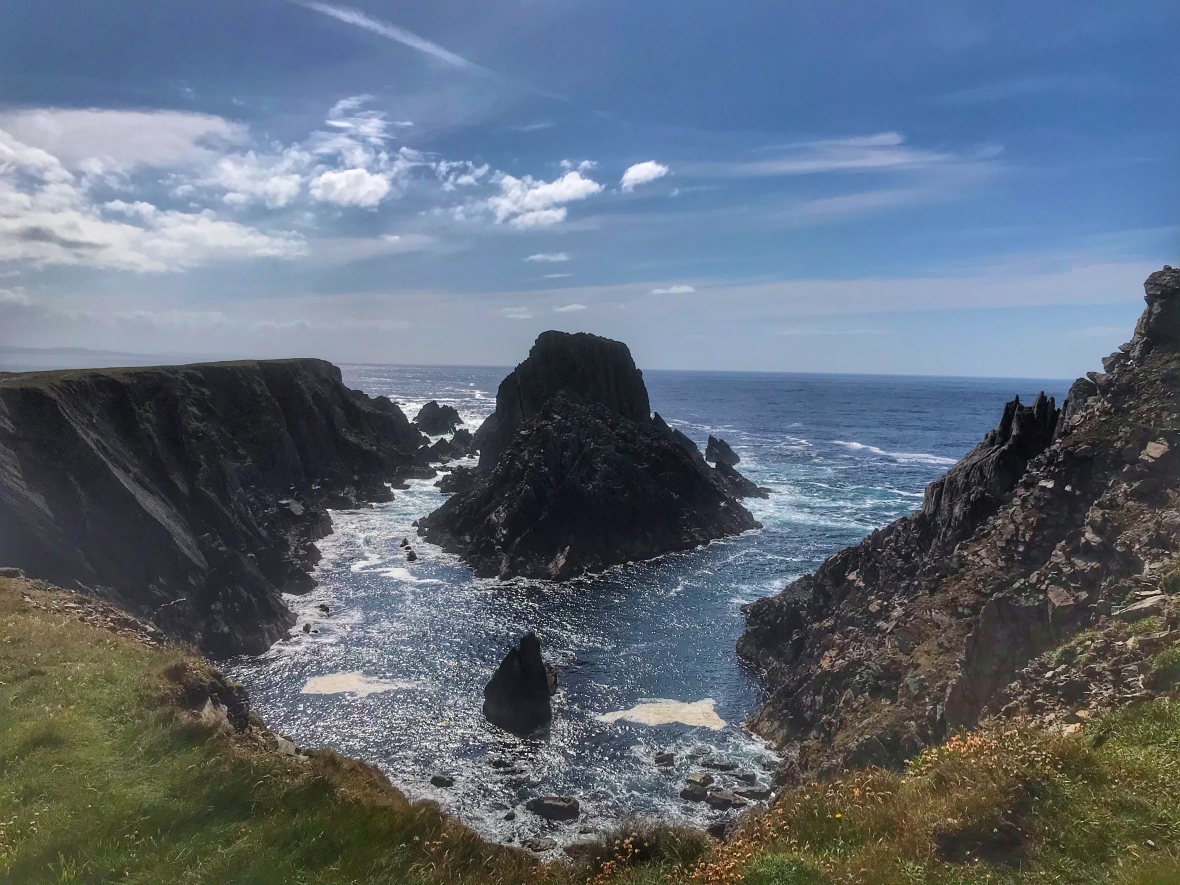 Those wishing to enter this veritable ‘time loop’ at the tip of the Inishowen peninsula could do themselves a favor by staying at Vikki’s place for a few nights and embark on leisurely drives and walks around the rugged coastline along a ribbon of narrow twisting roads and pebbled laneways. 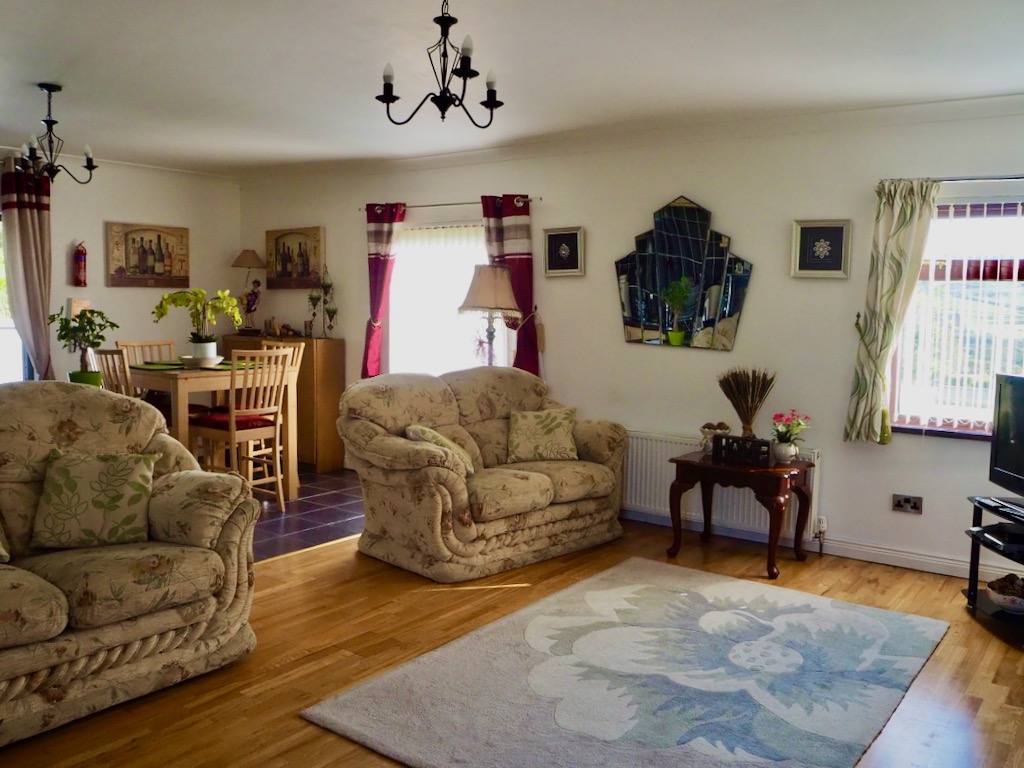 Cosy and comfortable, Vikki’s cottage features two adjacent bedrooms, with bathroom and shower cubicle next door, a spacious living room complete with soft armchair and sofa, wood and carpet flooring, a television, assorted DVDs and books, and a music system.

Adjacent is an open kitchen with all the modern amenities including gas stove, microwave oven, refrigerator and toaster. There’s even a washing machine. Furnishings are mood enhancing, buttery bright. An open terrace adjoins the kitchen accessed through glass sliding doors for dining alfresco.

Beyond is an extensive grassy lawn, enough for my three dogs to enjoy a refreshing morning and evening romp, with frontal views of mountains and side ones of the sea. 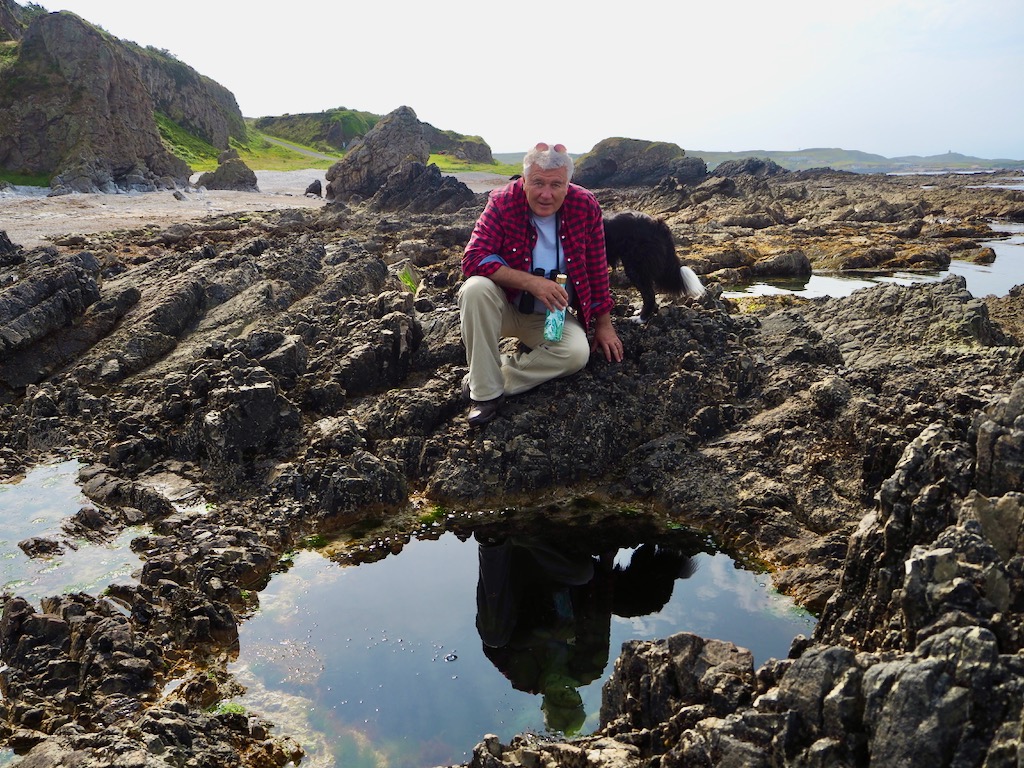 Vickie’s cottage is pet-friendly, she herself being proud owner of three dogs, and is within easy reach of many of the region’s attractions.

Highlights for my companion and I there recently included a sunny afternoon’s walk around Malin Head, less than ten kilometers away, designated the most northerly mainland of Ireland. While the nation’s most northerly point itself is Inishtrahull, an island five-miles offshore, a stony pathway around the headland brings you to Hell’s Hole, a deep chasm in the cliff face, and rocky Banba’s Crown, which according to the ‘Book of Invasions’ was site of the first women ever to invade Ireland. The area also grants a perfect opportunity to watch graceful gannets, with a wingspan of two meters, skimming the Atlantic swells.

On the way to Malin Head, be sure to look out for the home of Derry-born artist Philip McFadden. It’s the last house before the road rises to the parking lot. You’ll notice two sculptured heads gazing from a roadside fence, an example of Philip’s thought-provoking creativity laced with black humor. A series of decorative heads line his driveway, the nucleus of what he hopes will soon be a sculpture garden and artists’ pods. 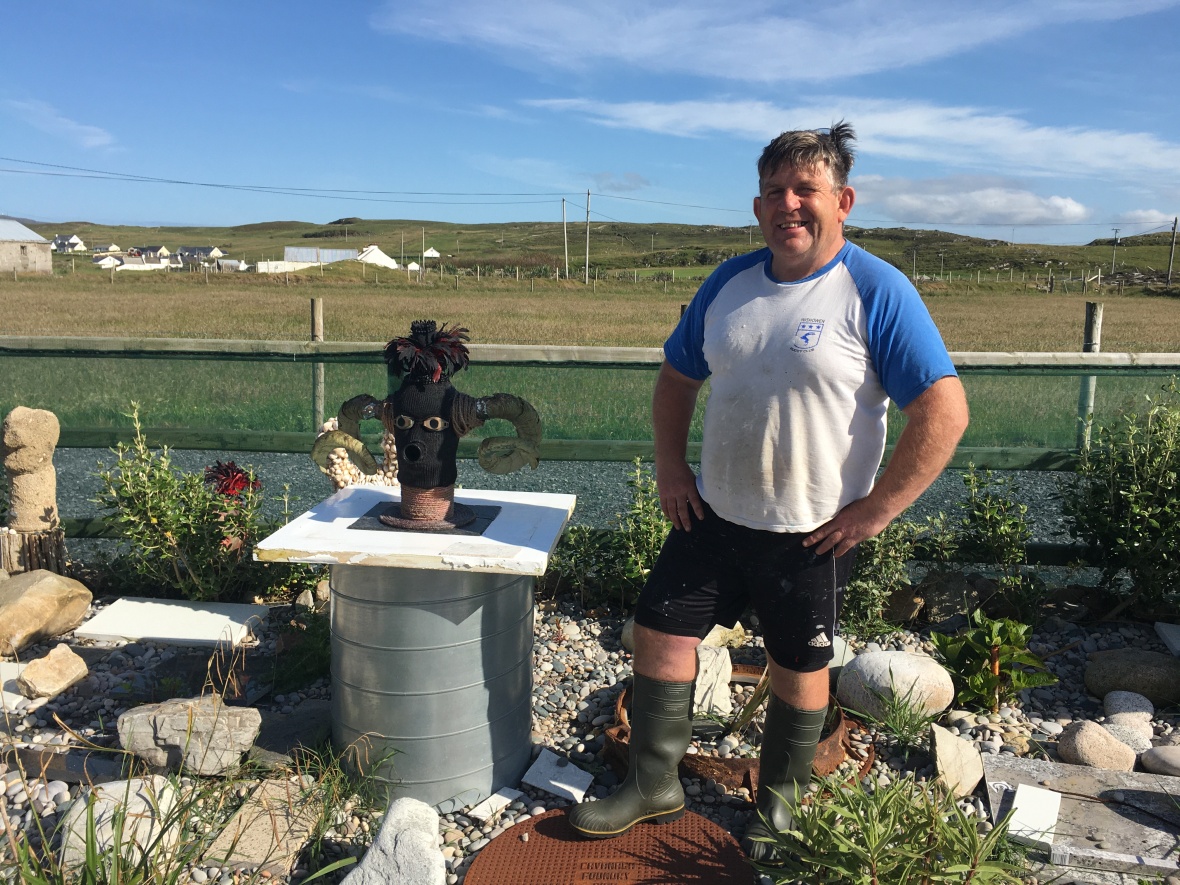 Philip McFadden from Derry, now living beside Malin Head, stands proudly beside one of his creative artistic works, a decorative head symbolising Ireland’s ancient Celtic past.

We also enjoyed a stunning sunset over the Atlantic Ocean, two kilometers from Portmore Pier, beside a druid’s cave, the ruins of a medieval church and a wishing well that can only be seen when the tide is out. 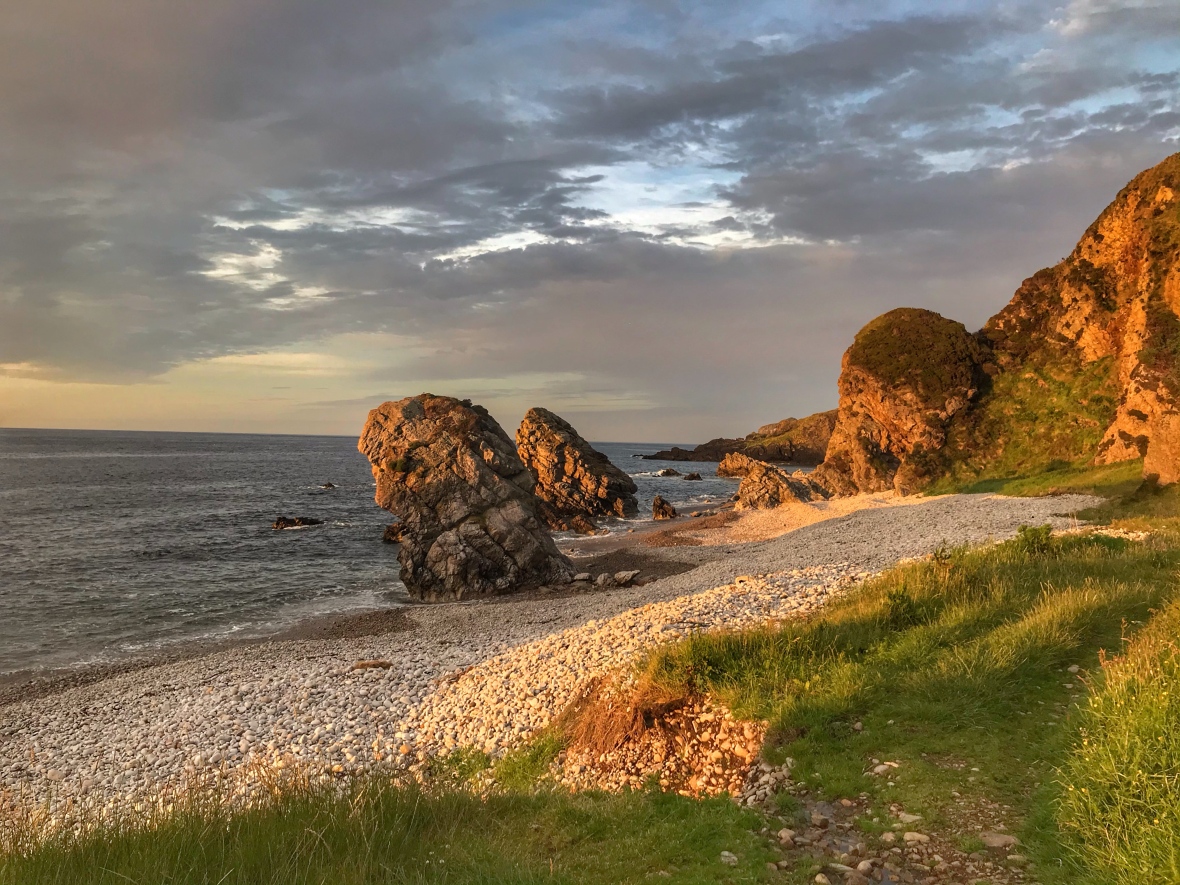 If feeling more energetic, hike for an hour up Crocalough Hill towards the Irish Aviation Authority Radar Station. It ends at a lake that is home to beautiful blue dragon-flies and flocks of resting seagulls, with panoramic views over island and mountain far below. Friendly local artist and shopkeeper at nearby Mullins store Teresa Doherty, is helpful with directions, as is her sister, Celia.

(l to r) Teresa Doherty with daughter, Clare. Teresa’s paintings adorn the walls in Mullins shop in the townland of Bree.

These are all places within a ten-minute drive of Vikki’s cottage. Further away, but less than a two-hour drive, are other impressive attractions. These include Grianan of Aileach, a ringfort dating back 3,000 years with scenic views over Inch Island with its wildfowl reserve; a 15th century castle in the market town of Burt, former home of the O’Doherty Clann; Greencastle, with its Maritime Museum and Planetarium and the ruins of Northburgh Castle, as well as the coastal town of Moville and its wonderful stone pathway skirting the banks of Lough Foyle.

For further evidence of ancient settlements, take a short drive to the town of Culdaff and wander around Bocan Stone Circle and the megalithic tombs. As for gemstones such as opal, jasper, amethyst and topaz, a visit to the raised beach of Ballyhillin, formed after the last Ice Age, may turn out to be a most rewarding trip.

Aside from inspiring land and seascapes, this region of Ireland is awash in leisure activities for both adults and families, including kayaking, surfing, horse riding, golf, cycling and fishing.

Raised beach at Ballyhillin, formed during the Ice Age.

As for the Hollywood movie, Malin Head is one of several picturesque Irish locations, representing part of the fictitious ‘Planet Ahch-to’ in the 2017 Disney film ‘Star Wars: The Last Jedi.’ With luck, you might meet a Luke Skywalker lookalike, Chewbacca or a galaxy of mystical creatures such as porgs, fathiers and vulptex during the region’s frequent festivals.

Landing half an hour late in #Paris and we’re relaxed as our #luxuryride with @blacklane includes a free hour wait #luxurytravel #travel #luxurylifestyle #luxurycars
This is the closest you can get to sleeping near #versaillespalace See our latest article on how best to enjoy a stay at @waldorfastoria #versilles #luxurytravel #france #travel
Only the French can transform prunes and Armagnac into such a delectable dessert. See our story ‘Gourmet journey to the most historic restaurants of Paris’ #Paris #luxurytravel #gourmetfood #frenchfood
Our choice of restaurant in #albifrance is Alchimy and the #desserts are only one reason.
Where will you celebrate #teaday? Read about our #sensorial afternoon @mariagefreresofficial in the #maraisparis #afternoonteatime #luxurytravel #travel #gourmetartistry
Traditions are still alive and well in the medieval town of Sighisoara in Transylvania, Romania. #travel #sighisoara #transylvania #medievalfestival #festivals
Renovated Hôtel de Paris Monte-Carlo Greets New Era. Read our latest article on how to best enjoy #MonteCarlo and #hoteldeparis #luxurytravel @visitmonaco @hoteldeparismc
Scenic setting and a singing chef, just two of the treats awaiting you at Ioana Hotel in #sinaia #romania See new story on our site about this #fivestarhotel on #prahovavalley #luxurytravel #transylvania
It’s always good to challenge our senses and look at #art from various angles. Don’t miss this #immersiveexperience @atelierdeslumieres #paris to see #Kandinski and #cezanne in a new perspective #parismuseum #whattodoinparis #luxurytravel
Let it rain in Paris! I’m home, having a meal prepared by #chef Santiago Guerrero at #HeyHoneyrestaurant #hotelmaisonmere #gourmetfood @maisonmere.lovers #luxurytravel #tuesdayinparis #lunchinparis @maisonmere.paris
Hmmm… Mondays. Perfect day for a #teatimeinparis and we have just the right place #mariagefrères in #maraisparis @mariagefreresofficial #afternoontea #tea #paristea #authenticexperience
Good morning, Paris! View from the 6th floor suite @maisonmere.paris #morninginparis #paris #luxurytravel #mondayinparis #goodmorning #parisrooftops
A really homey feel created with so much attention to detail by owners of @maisonmere.paris We love it! #luxurytravel #parishome #parishotels #paris #mondayinparis
Finishing a good #saturdayinparis with a #cognac in the #hotelbar @hotelbelami @bsignaturehotels #saintgermain #paris #luxurytravel
As above so below. Good at @hotel_vernet #restaurant matches the skill and beauty of its historic ceiling #belleepoque #historicparis #gourmetfood
Something special tonight, dinner unde a 1913 #gustaveiffel ceiling @hotel_vernet @bsignaturehotels #champselysees #paris #finedining #luxurytravel
View from bedroom window of @hotelbelami @bsignaturehotels over #stgermaindespres #parisvacation #weekendinparis #luxurytravel
Saturday in Paris, fun begins just as you step outside your hotel when staying @hotelbelami @bsignaturehotels #saintgermain #livemusic #saturdayinparis #luxurytravel #travelagain