As a bibliophile, imagine my delight upon seeing a mini-library as well as scrolls and a classic old manual typewriter adorning shelves in the foyer of the 4-star Sapientia hotel in Coimbra, central Portugal.

Two more scrolls bound neatly with red ribbon lay in a bell-jar inside the doorway of my room and two open books framed creatively in black hung decoratively on the wall behind my bed. 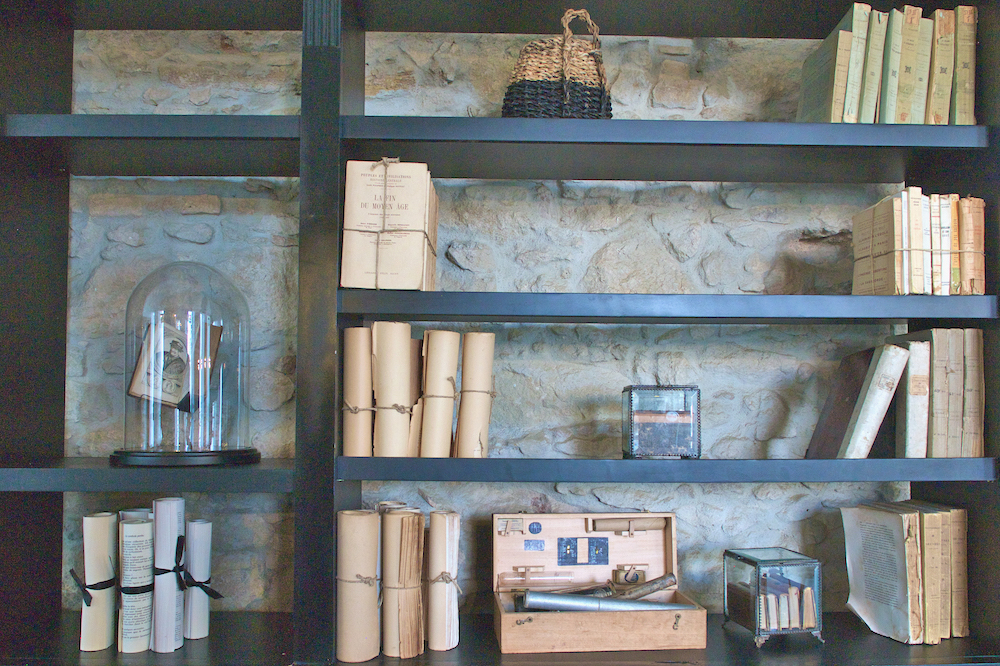 Such artefacts are subtle reminders of the 22-room hotel’s well-chosen Latin name, meaning ‘wisdom,’ after the Roman goddess ‘Sapience.’ It is also a nod to the building’s previous existence, as a training center for young Jesuit novices, a religious order renowned for its rigorous intellectual discipline and focus on education.

Being the only hotel in the Old Town center, a UNESCO World Heritage site, and close to one of the oldest universities in Europe – books are important to the hotel’s proud owners, two couples Andre Sardet, a well-known Portuguese singer, composer and musician, and his wife, Catarina, and José Manuel and Maria Israel Portugal. 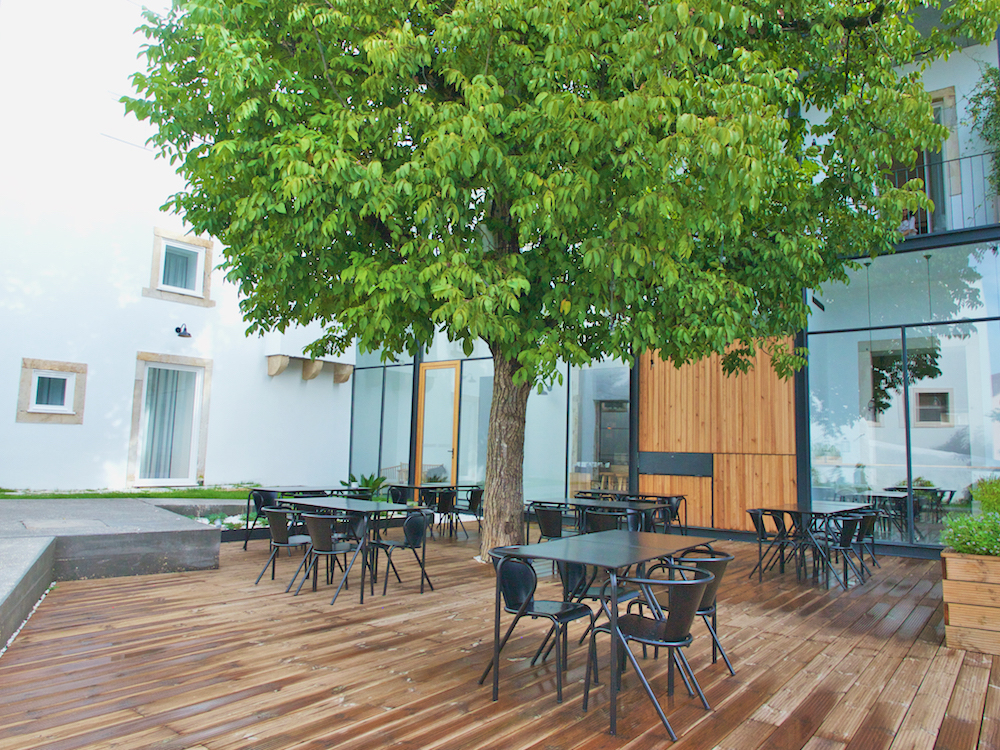 Renovating three buildings on a site that dates back to ancient Rome and later transformed into a Jesuit training center, is no easy task.

“It was several years of work until we could open,” she said. “The challenge was to create a construction design that would join the charm and architecture of three buildings from the 19th century using contemporary materials and provide the comforts that everyday life demands.”

Rooms at Sapientia are divided into studios, suites and apartments. Our stay was in the latter category, marked as C302. Spare, neutral toned furnishings, including a gray stretch sofa and pinewood flooring, grant a distinct Scandinavian ambience. A small round dining table with three chairs of lacquered bamboo shares the space with a well-stocked kitchenette featuring a two-ring stove, coffee-maker, toaster, fridge and cutlery. Natural light floods into the rooms through broad windows.

Location is just one of the hotel’s many attributes. Its position high above in the Old Town could hardly be more convenient, within easy walking distance of many highlights. These include the 18th century Baroque Joanine Library in the historic University of Coimbra complex, famed for its with books dating from the 1400s and 1500s. 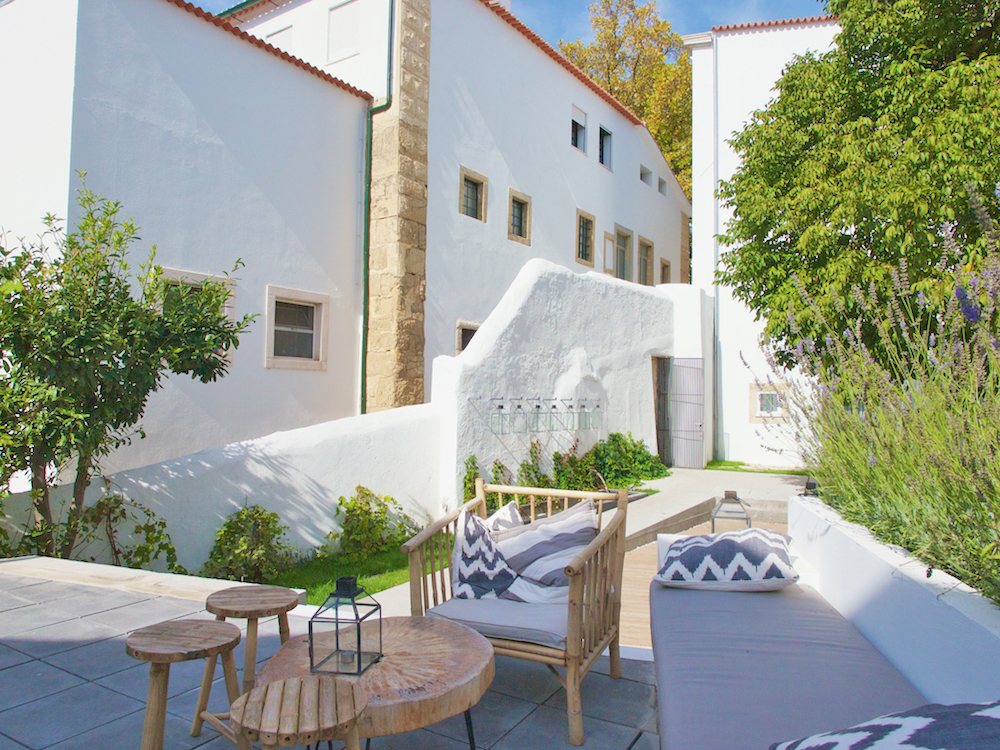 The library features a stone floor patterned with geometric motifs and its plaster ceilings are decorated with allegorical trompe-l’oeil paintings. Interestingly, officials say they keep a colony of bats there to eat insects, especially moths, that might destroy some of the 60,000 collection. Reflecting both Roman and Islamic design characteristics, the university complex is also home to science and natural history museums.

Another highlight of the Sapientia is its rooftop terrace which offers terrific views over the Mondego River and Coimbra. It’s a lovely, secluded place on a balmy day to indulge in drinks and leisurely conversation or to enjoy stunning sunsets.

During radical renovation work on the hotel, several surprises were unearthed, the most eye-opening of which can be seen right below your feet under glass in the foyer. Twelve-feet down can be seen an old cistern and water system which the owners soon intend to turn into wine cellars, perhaps even a snug place for special underground wine tastings.

One of the physical challenges Coimbra presents is that its attractive Old Town can only be reached up steep, narrow cobblestone streets. Never fear, however, limited parking is available beside the hotel. There is also an inexpensive ‘Botanico’ mini-bus shuttle which stops very close to Sapientia that winds its way up from Santa Clara, over the bridge leading to the historic center and through the sloping 300-year-old, 13-hectare botanical gardens to the university complex.

Aside from the botanical gardens and university, the hotel is also within easy walking distance of other landmarks including Casa Fado and historic Cafe Santa Cruz where concerts focusing on the unique Coimbra style of fado music take place.

Sapientia also features a spacious, walled outdoor terrace at ground level where dinner can be enjoyed alfresco, with a special resident in a pool of water there – Esmeralda, a tiny, adorable turtle.

Service, from a young and efficient staff, is warm and helpful.

Combining old and new, rustic and contemporary, as well as occupying a location convenient to many of Coimbra’s historic sites makes the Sapientia a must-see hotel.

How did you celebrate #worldwhiskyday ? We had a wide selection and we’re sharing our #sensorytravelexperiences with you #worldwhiskeyday #wisky https://worlditineraries.co/2020/05/14/world-whisky-day-travel-with-you-senses%e2%80%a8/
Imagine living in a place like this #perfectliving #naturalliving #donegal #calm #peaceful #peaceofmind #mentalhealth
Good initiative by @virginwines to support #growwell #charity for #mentalhealth see full story on @worlditineraries