‘A Greek tragedy in a rural Irish setting’ – that’s how my companion described the ongoing production of ‘The Playboy of the Western World’ at Belfast’s Lyric Theatre after seeing it for the first time several days ago.

And there’s strong truth to that insofar as we have a hero, raised, then fallen, wearing garb that’s ancient-seeming with a modern twist. But more of that later.

A joint Lyric and Dublin Theatre Festival production in association with the Belfast International Arts Festival, director Oonagh Murphy has transposed the action in time from the early 1900s to the 1980s but the plot follows the original closely. With the actors speaking lyrically in northern Irish accents, I thought a link would develop with ‘the Troubles’ during that decade, but there wasn’t. In fact, I would be even more intrigued to have had the action transposed to the present day.

In contrast to the response to the inaugural production in 1907 of John Millington Synge’s west of Ireland classic when the Abbey Theatre faced riots in the stalls from people considering it an insult to common Irish decency, the packed audience here gave a well-deserved standing ovation to the talented cast and crew.

Upon opening, while aspects of Molly O’Cathain’s stage-setup are predictable – a countryside Irish pub with lace curtains, cheap plastic chairs and a few bar stools –  her innovative addition, to great effect, is a brightly lit window – akin to a much larger mirror actors use in their dressing-rooms – above the main stage illuminating a bedroom, the action within creating enticing dimensions to the goings-on below.

It is here the most sensual scene of the play takes place when Pegeen Mike, the landlord’s 20-year-old daughter, played in a feisty manner by Eloïse Stevenson – strict, rigid, even stern working in the bar below – reveals a hint of feminine eroticism, in a moment of contemplation letting loose her long dark hair and slowly combing it over her shoulders. 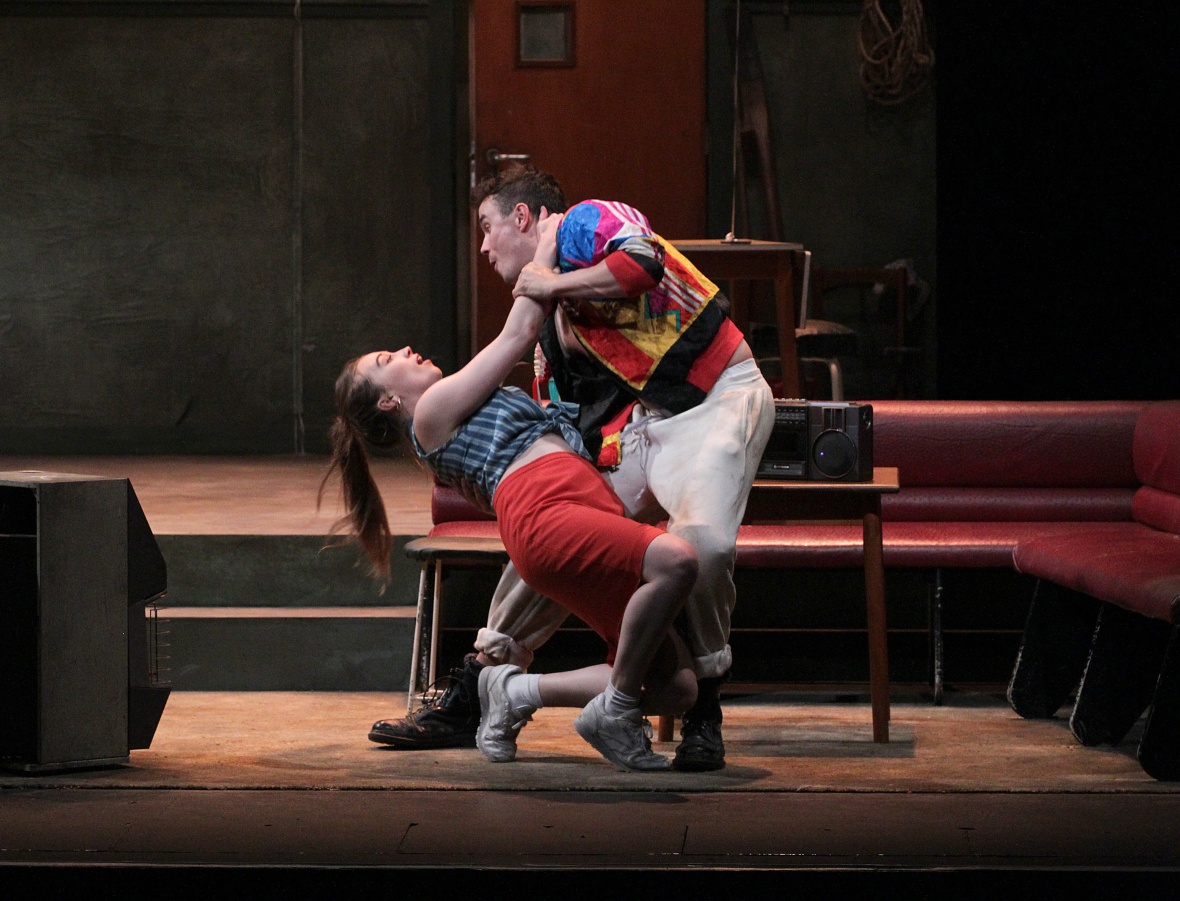 It is here also the innate cowardice of lead character, Christy Mahon, played boyishly by Michael Shea, is laid bare as he runs and hides there before facing utter humiliation in being forced to wear a woman’s petticoat, looking far from the man boasting earlier of killing his cruel father. In between times, he’s treated better probably than Christ himself was by his disciples at the height of his popularity. There’s even a hint of a Mary Magdalene washing-of -feet scene.

To my ear, living mainly now in rural Donegal, the antics and banter in the pub between characters sounded authentic. Even the listing of various petty crimes by locals in the neighbourhood reminding me of the odd trip I’ve made to the local court to hear proceedings.

Some of the negative aspects – including cruelty, crudeness and hypocrisy – that can suffocate rural living are also well portrayed, talk about the abandoning and killing of dogs, here by hanging, and the way in which everyone suddenly turns against Christy Mahon when the truth that doesn’t suit their own needs comes out, quickly transforming him from a ‘gallant’ to ‘a salty liar.’ And the drunkenness, “retching speechless over the holy stones” at a funeral.

Of course, criticisms of the language in the play as being too hifalutin, pretentious and flamboyant to be real, especially coming from the mouths of rural characters, is somewhat justified. But it’s also immensely entertaining to hear phrases like ‘naked as an ash tree on the moon in the month of May.’ A kind of lofty, romantic eloquence.

In defence of Irish people in rural Mayo of the time, it wasn’t of their own choice they afforded little education. Animals had to be fed and hard stony ground planted just to eke out a bare living and feed many mouths.

However, what rural Irish may have lacked in formal education then, they often made up for in cunning and craft, not to mention graft. And, being Irish, they innately inherited many fine turns of phrase, often in the form of earthy humor, an element that is ripe throughout the play, as in “and he the quare fella that’d be drunk with the smell of a pint.”

Knowing that Synge came from a privileged urban Protestant Anglo-Irish upper middle-class background, it’s almost understandable the poor fellow would be in a quandary trying to match his formal learning of the classics with his misunderstanding of aspects of peasant Irish life. Or maybe, as the reaction of the 1907 audience perhaps showed, the playwright got it right and there’s a reluctance by us Irish, as with other nationalities, to have a real close-up look at ourselves in the mirror.

What can be said is that he did his best with what talents he had and contributed greatly to the Celtic literary revival of the time in association with Lady Gregory, W.B. Yeats, and company.

Aside from the main actors, Stevenson and Shea, other performances at the Lyric deserve strong praise.

Michael Condron’s characterisation of Shawn Keogh as a spineless wimp, camp in nature, is quite hilarious, his physical expressions as much as his words making even the most stern-faced of people break into smiles, if not outright laughter.

Aoibhéann McCann’s entry as Widow Quinn, in tight jeans and leather jacket as if she had just stepped off her Harley, cigarette dangling out of the side of her mouth, is hungry, raw sex personified. The ultimate Cougar, rural style.

As for my companion’s comparison of the play to a Greek tragedy, aside from the hero’s ultimate fall from grace, there’s the lasting memorable image of Christy Mahon, would-be killer and athletic champion, standing stage centre, a woman’s ribbon across his brow like a garland, a petticoat dangling loosely from his shoulders like a robe.