It’s rare to see the words of a poet inscribed on the walls of a hotel but that’s one of the things that sets Belfast’s Grand Central Hotel apart from other competitors in the northern Irish capital.

Owners, the Hastings Group, felt it would be a novel way to introduce their luxury venue to guests and asked native scribe Paul Muldoon if he would pen an ode, ‘Belfast Hymns,’ to the city and its history. Now guests can enjoy his creativity throughout the property. 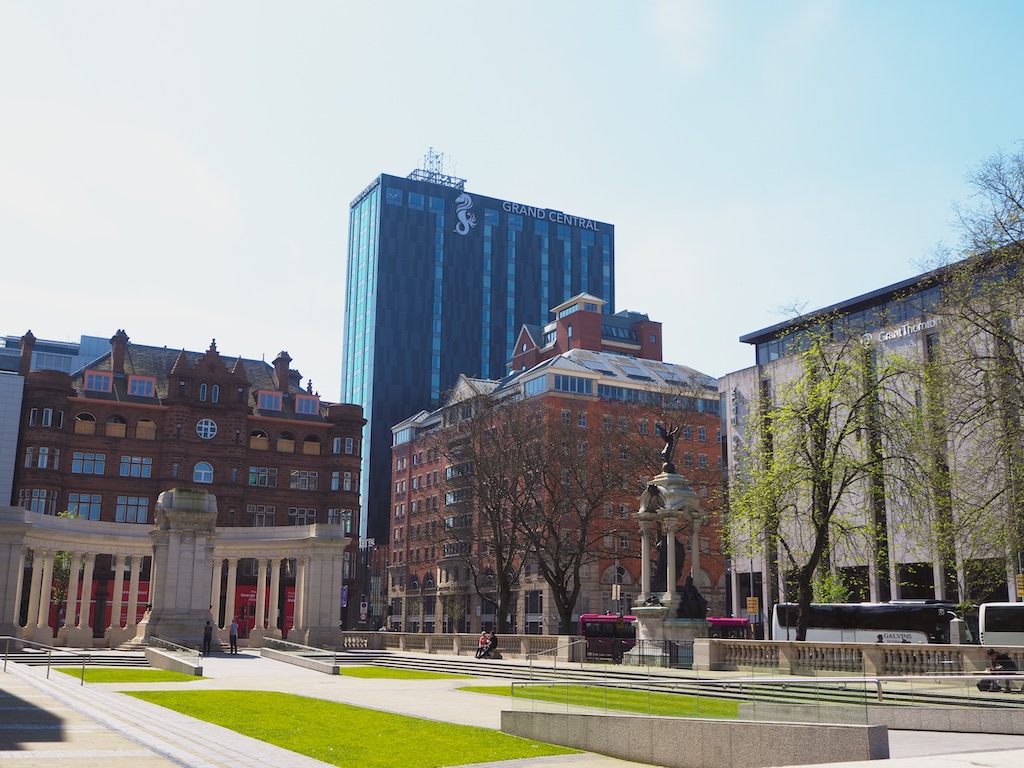 Verse is not the only thing that sets the 300-room Grand Central apart from others in the city’s rapidly expanding hotel market. It also boasts panoramic views from ‘the highest bar in Ireland,’ its aptly-named ‘Observatory’ cocktail lounge on the 23-third floor, replete with plush velvet seats. From there, guests enjoy a birds-eye view over the entire downtown area including the former Harland & Wolff shipyard where the ill-fated Titanic was built, Belfast Lough and the scenic Black Mountains and Mountains of Mourne beyond.

The Grand Central, the country’s largest hotel, is the seventh property in the Hastings portfolio and at more than 50 million pounds (65 million USD) represents the largest single investment by the family-owned group, which has been in business in Northern Ireland for more than 50 years.

Welcomed outside by liveried doorman in top hat and gloves, our car was promptly valeted and we entered a gleaming, spacious lobby characterized by a row of tall white columns, with lighting fixtures resembling giant hats hanging from the ceiling. To the right, the stylish Grand Café was flooded by natural light from floor-to-ceiling glass walls facing directly on to the street. One tasty item on the comprehensive breakfast buffet there are Armagh apple scuffins, a cross between scones and muffins. Bistro-style food is also served throughout the day.

Ushered to room 2107, we enjoyed a perfect view over the green copper dome of the ornate Victorian-style City Hall and its inner courtyard, ample room space and ESPA toiletries.

The idea for the hotel’s name originates from the first Grand Central Hotel, which operated nearby for about 100 years from the late 19th century onwards. Artefacts from that property adorn the lobby area outside the first-floor Seahorse Restaurant, including an impressive array of silverware affixed to the wall.

Inspired by the city’s coat of arms the restaurant features an imagined emblem of the city seal overhead in a large frieze depicting a wolf representing land and a seahorse representing the sea. Inside is a collection of vintage photos reflecting the evolution of the city with scenes of old street trams, the Ulster Hall where cultural events are held and the historic Queens University.

A large black and white still-life by Neil Shawcross entitled ‘Consomme Cup’ decorates one wall. Sipping on local craft gins and whiskeys makes for a leisurely afternoon in the Seahorse. Other facilities include the Panorama Lounge for private receptions of up to 100 guests, offices, retail units and two conference suites.

Being centrally located is a major advantage for the Grand Central, with lively bar, cafes and restaurants dotted along the Dublin Road, a five-minute walk away, and major shopping centers, multiplex cinemas, and even the BBC studios, also nearby.