As Geneva prepares for its largest celebration, L’Escalade, a re-enactment of an historic moment in the city’s history in mid-December, here are some highlights I strongly recommend for those traveling there.

From lake boat rides and a charming cobblestoned Old Town to the world’s most advanced scientific research center and a hill-top library-museum housing the oldest manuscripts on earth – all these reflect the sheer diversity of attractions in Geneva.

Located along both sides of Lac Léman (otherwise known as Lake Geneva) in the shadow of Mont Blanc, this pretty, laid-back 3,000-year-old city founded by the Celtic Helvetica tribe beckons tourists with an abundance of cafes, restaurants, arthouses and a thoroughly cosmopolitan population.

It would be advisable to check out the special ‘Geneva Pass,’ which grants free access and generous discounts to most city attractions, including a cable car ride to Mont-Salève and a one-hour lake cruise. 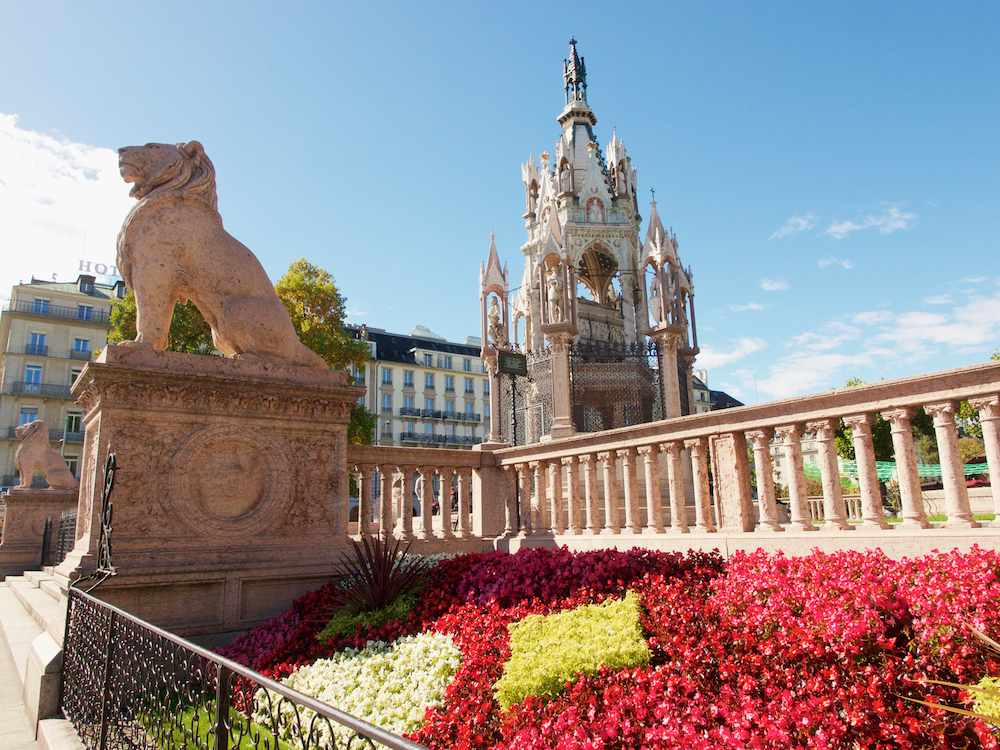 There are two main ways to enjoy the sights of Geneva – by water and by land. We tried both.

A walking tour, while requiring more energy, is immensely rewarding, especially if the guide has the broad experience of Gianna Loredan, who leads tours for the Geneva Tourism & Conventions Foundation. A veteran of the travel industry, there is little this friendly, petite lady doesn’t know about the lakeside city she has lived in for decades and reared her family.

Our walk lasted most of the day and comprised both Geneva and nearby Carouge, a charming neighborhood with a street-full of attractive artisan shops including glass-blower, milliner, weaver, clockmaker and chocolatier. It would be a spoiler to describe what you will see and hear on such a tour, but suffice it to say the sights span centuries of history, from Gothic architecture to the tale of the 19th century Brunswick Monument, as well as diverse panoramic city views.

Even though Mouettes (small boats) cross the lake all day, the chance to cruise the romantic Lac Léman, especially by night, is too tantalizing to turn down, with a range of operators to choose from. We opted for CGN, which offers dinner packages with drinks. Lasting around two hours, we enjoyed a traditional Swiss cheese fondue served in a loaf of sourdough bread, while admiring the famous, 150-meter Jet d’Eau from different angles. 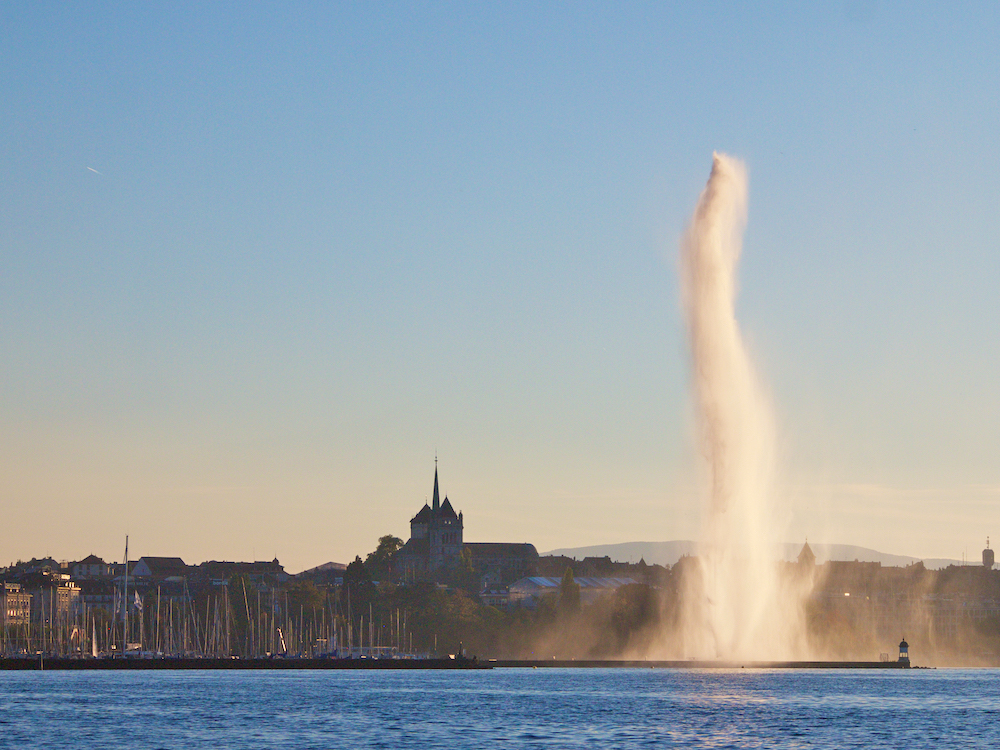 Embodied by two appropriate symbols guarding the door – an Egyptian scribe and a Medieval sibyl in meditation – this fascinating museum is home to a rich range of literary treasures.

Such artefacts include ancient ones such as pictographs, the earliest form of writing dating back more than 3,000 years; 2,000-year-old hieroglyphics and a 1st century AD papyrus containing the Gospel of Saint John. The more modern include an 1835 autographed manuscript by Victor Hugo, an autographed musical score by Wolfgang Amadeus Mozart and first editions by such leading writers as Charles Dickens, (Oliver Twist), Gustave Flaubert (Madame Bovary) and Samuel Beckett (Waiting for Godot), not to mention works by Dante, Homer and Shakespeare.

Aficionados of US television series, ‘The Big Bang Theory,’ and others interested to know how the world began, would be amiss not to visit CERN (the European Organization for Nuclear Research). Here on the outskirts of Geneva, physicists and engineers are probing the fundamental structure of the universe by using the world’s most complex scientific instruments to study the basic constituents of matter – fundamental particles. Colliding together at close to the speed of light, the interaction of these particles gives physicists clues about the laws of nature. Visits can be arranged to the site where special exhibitions and videos explain the work being conducted, including a large-scale model of the intriguing tunnel-like hadron collider itself. During our visit, we spent some time in the Microcosm and Universe of Particles exhibits and took a peep into ATLAS, one of CERN’s control rooms.

No explanation of the Red Cross is required but the organization’s museum places context to its worldwide mission. The permanent collection entitled ‘The Humanitarian Adventure’ is three sections: defending human dignity, restoring family links and reducing natural risks.

Interactive displays and an audio-guide upon entry make understanding easier. The exhibition starts with a ‘Chamber of Witnesses’ – twelve life-sized figures standing in a semi-circle in a darkish room. No explanation is given of its purpose, which is a bit disconcerting, but they all speak later about their difficult experiences in their home countries. The ‘Defending Human Dignity’ exhibition features listings of major events involving protection of human rights as far back as 1,750 BC. Varied art works by prisoners illustrate the importance of maintaining sanity and self-worth in difficult conditions. The ‘Restoring Family Links’ exhibition starts out with World War I prisoner records that the Red Cross used to re-unite families. Photos of children after the Rwandan and Srebrenica genocides illustrate dramatically the cruelty of Man. The ‘Reducing Natural Risk’ exhibition features touch screen videos of health and natural disaster prevention responses.

International Museum of the Reformation

Martin Luther may have been the world’s first ‘whistleblower’ and this, being the 500th anniversary of his religious revolution, is an opportune time to visit the museum that tells his story.

Angered by – among other things – corruption within the Catholic Church in the sales of fake saintly bone and skin bits and the Bible being written in a formal Latin language most people couldn’t understand, Luther created changes in Christian teaching. Thus, the Reformation of the 16th and 17th centuries and the establishment of Protestantism, a movement led by luminaries such as John Calvin, William Farel, Theodore Beza and John Knox.

Such radical transformation in European thinking did not come without a considerable level of belligerency between both sides of the religious divide and this museum grants insights into the nature of that through propaganda drawings and caricatures, detailed print, audio and video explanations of Luther’s teachings, best-selling books from the first decades of printing including Luther’s translation of the ‘New Testament’ and a music room with selections that helped usher in the new Protestant era, including Huguenot psalms and Lutheran chorales.

Geneva’s sense of elegance infuses the ambience of many of its hotels, with leading contenders of choice being Hotel d’Angleterre, Hotel Metropole and Le Richemond.

As Geneva is a walking city, make sure you spend time strolling through its many green areas, such as the English Garden, Bastions Park with the Reformation Wall, Parc La Grange and La Perle-du-Lac and Parc Moynier, all granting different panoramas of Mont Blanc and the lake.