Any person who spends 16 years incarcerated in prison and 70 days on a hunger strike for a political and social ideal they passionately believe in has to be admired.

Even more so when that same person later achieves a Doctorate in sociology (with a thesis creatively entitled ‘Unrepentant Fenian Bastards’) and becomes a well-respected playwright, author, screen-writer and co-founder of a film festival.

That rare caliber of person is Antrim-born, Dundalk-based Laurence McKeown whose latest play ‘Green & Blue’ was performed recently as part of the Earagail Arts Festival at the Amharclann Ghaoth Dobhair, Donegal in northwest Ireland. The play was directed by Paula McFetridge of Belfast-based Kabosh.

Considering the play’s two characters are policemen, one with the Royal Ulster Constabulary (RUC) in Northern Ireland and the other with the Garda Síochána in the Republic of Ireland, both of whom would have wanted to arrest or even shoot IRA members, it says much for McKeown’s depth of empathy that he teases sympathy from his audience about the plight of the two men burdened with the task of protecting a dangerous border between the two countries during the decades-long conflict.

“They had a role to play, which they were trained for, just like members of the IRA, the fact that we had different views of the world is acceptable and open to discussion,” McKeown said. “The key to mutual understanding is that we are all human, we all have separate, individual identities outside of the uniforms we might wear.”

Identify is a key theme in ‘Green & Blue,’ (the colors of the uniforms worn by members of the two police forces) one the playwright is keenly interested to investigate. His research focused on around 30 archives created by Armagh-based ‘Diversity Challenges’ co-ordinated by Will Glendinning reflecting the experiences of police officers who served during the historic northern Irish ‘Troubles.’ In fact, excerpts from the play were read to groups of police officers from both sides of the border before it was finalized. It’s first performance was at Belfast’s Girdwood, a former RUC police barracks. Twenty-six Irish gardaí attended a performance at An Grianan theater in Letterkenny, Donegal. 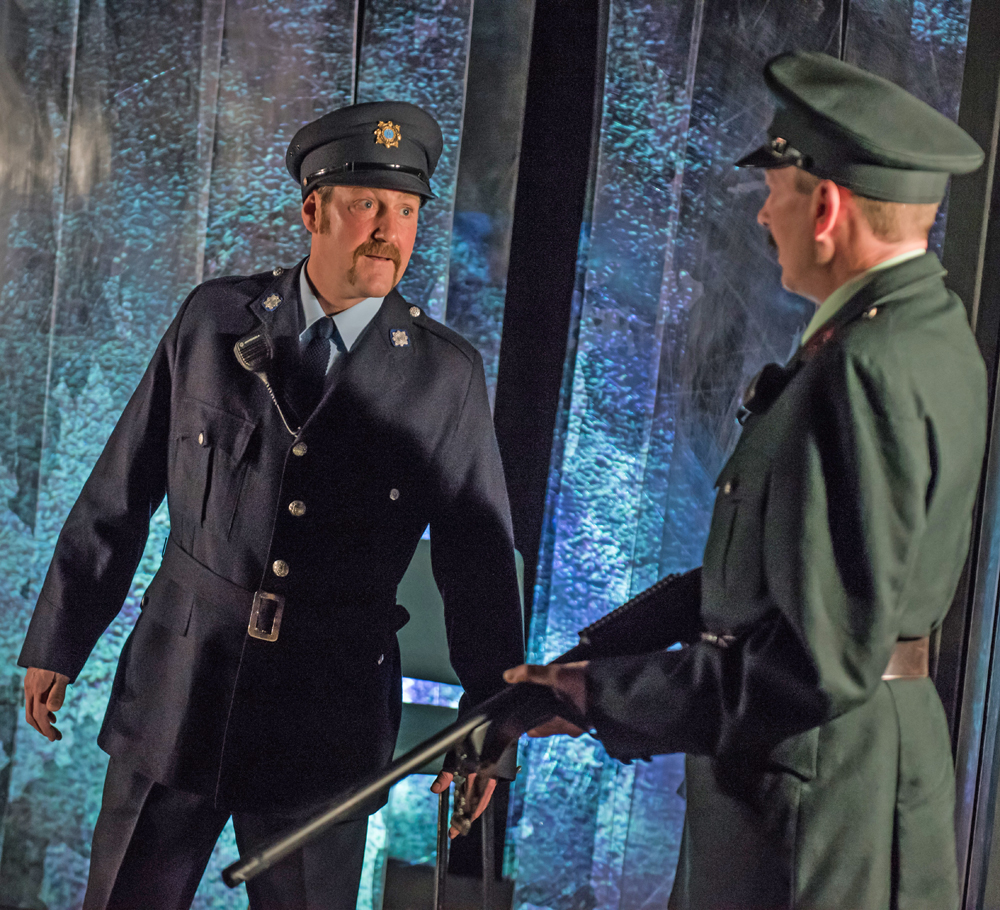 The one-hour show mixes background multi-media effects with dialogue as the two policemen, played extremely well by James Doran and Vincent Higgins, mostly facing the audience, share professional, then personal, information, at first awkwardly via hand-held radio, then through a pivotal one-on-one meeting. By turns, serious and funny, ‘Green & Blue,’ grants insights into the minds of the two men, isolated and fearful amidst the rolling Irish countryside where Death can appear in the blink of an eye, either a road-bomb or a sniper’s bullet.

Humorous moments occur when David from Newcastle in County Down and Eddie from Cork, are attempting to speak to each other over crackling X-ray radios but unable to understand each other’s accents. As one speaks about ‘a mad dog killing sheep’ and the other understands him to mean a gunman nicknamed ‘Mad Dog’ on a killing streak’ one can imagine the hilarious miscommunication that ensues. Or when the rural Cork man describes staying in bed-and-breakfast accommodation and eating “powdered asparagus” and “exotic food” such as spaghetti bolognaise, and the daughter of the owner having “legs that ran all the way up to her armpits.” Even the idea of borders creates humor as when the two men gaze intently down at the ground either side of them confounded, asking each other where the border they are supposed to be protecting actually begins and ends.

Poignancy rides comfortably alongside humor in ‘Green & Blue’ with both policemen agreeing they are outsiders, members of a “third community,” then one asking the other, “When do we decide what we want rather than simply become what’s expected of us?” This illustrates the universal themes the playwright wants to highlight, none more aptly voiced than one of the policeman’s final haunting words.

“It’s a simple question really: why do we keep doing what we are doing, should we all not be exploring options in our lives?” said McKeown. “This question even came up in prison. We all went through a process of ‘unlearning,’ unlearning what we’d been brought up to believe by various authorities such as the state and the church. Initially in prison, republican political structures were rigid, conservative and Catholic. Then we started questioning why it should be so, and it started to change.” He added that ‘Pedagogy of the Oppressed,’ written by Brazilian educator Paulo Freire, had a profound effect on him.

The question of identity is also mirrored in the different views of the two policemen. The Catholic Cork man knowledgeable about Irish Gaelic football, the other ignorant of it; the two disagreeing about whether Ulster is six counties or nine; and even, in classic Irish black humor fashion, how Protestant paramilitaries use baseball bats to break the legs of enemies, while Catholic ones use hurling sticks. 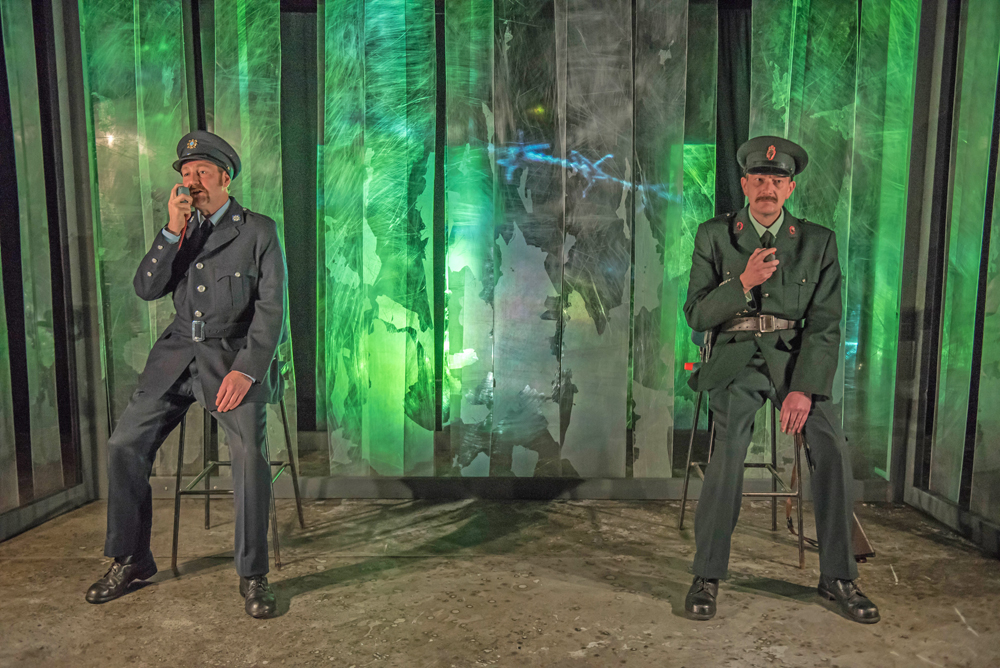 Adding an interesting dimension to the evening, McKeown and McFetridge took part in a post-performance talk hosted by Sonia Nic Giolla Easbuig, answering questions from the audience, with McKeown describing how he had met many people from the Protestant community, some of whom were former enemies. Often in such discussions, he said, there was initially “heated debate, even argument” but eventually greater mutual understanding was achieved.

Speaking with me for two hours at Teac Jack’s in Glassagh yesterday afternoon, Laurence spoke matter-of-factly about his own experiences after joining the Irish Republican Army at the age of 17 and ambushing a British Land Rover with a rifle. Within three years, he was jailed for life for IRA membership and the ambush and sent to the Maze Prison where later he was in charge of republican-prisoner education. 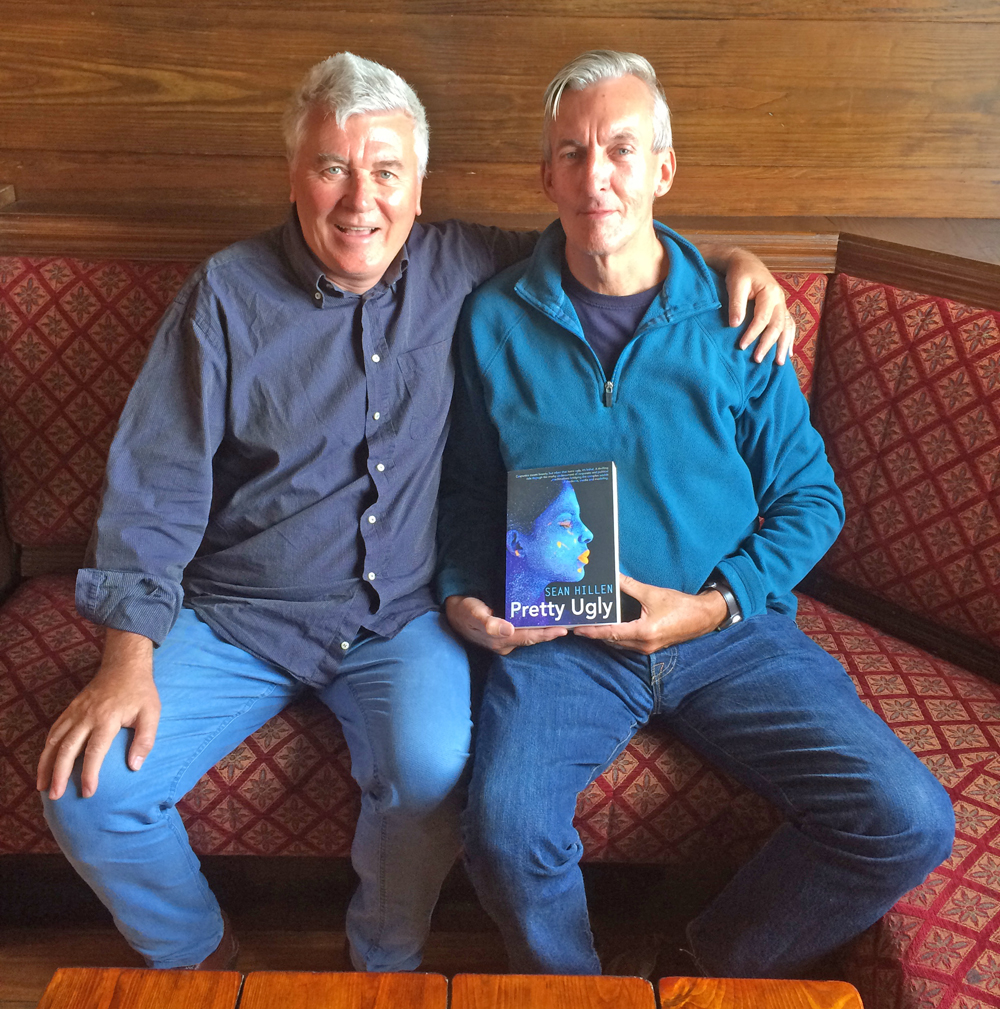 Thoroughly enjoyable meeting with Laurence McKeown (right) at Teac Jack in Glassagh, in the Donegal Gaeltacht.

“A fellow prisoner, John Pickering, obtained a stapled book on writing and we later started a magazine called ‘An Glór Gafa/The Captive Voice.’ That was really the start of my interest in learning the craft,” he recalled. “The magazine was full of satire, short stories, poetry and artistic drawings. I wrote a story entitled ‘VIP’ on fellow hunger striker, Francis Hughes, for the first edition and ‘The Visit’ for the second.”

Since then, McKeown’s achievements have been impressive. Aside from co-founding the Belfast Film Festival, he has co-written two books about Irish Republican prisoners in the Maze, ‘Nor Meekly Serve My Time: The H-Block Struggle 1976–1981’ (with Brian Campbell and Felim O’Hagan) in 1994 and ‘Out Of Time: Irish Republican Prisoners, Long Kesh, 1972–2000’ in 2001. With Campbell, he also wrote a film about the 1981 hunger strike entitled ‘H3’ and two plays, ‘The Laughter of Our Children’ in 2001 and ‘A Cold House’ in 2003, as well as his own play, ‘The Official Version’ in 2006.

Plays with Kabosh have included’Johanna Monahan,’ ‘It’s In The Streets,’ ‘Two Roads West’ as well as ‘Those You Pass On The Street,’ which producer, McFetridge, said was performed before 3,000 people at an open-air venue at the Genocide Memorial in Rwanda as part of the Ubumuntu Arts Festival in Kigali, and at the National Arts Festival in South Africa;

Asked by me whether he thinks a South African-style ‘Truth Commission’ would help heal the divisions in northern Ireland, McKeown said while there are some aspects of that commission that are controversial, something like it would probably help. “I doubt very much, however, if the British government would agree to it. They have too many skeletons in cupboards to hide.”

On his 70 days without food in the Maze Prison on 1981 hunger strike seeking political status which forced him into a coma, he says simply, “It wasn’t bravery, it was necessity.”

‘Green & Blue’ will be performed next at the John Hewitt International Summer School on July 25 in Armagh.