Rare is the theater review that focuses initially on stage design, an aspect often reserved as an aside to the quality of a play’s dialogue and plot and actors’ performances, but when the curtain rose on the Lyric Theater’s latest production in Belfast, eyes shot wide open and a few ‘oohs’ and ‘ahs’ echoed around the darkened hall.

The reason: a stunning set by Stuart Marshall for the dark comedy ‘The Ladykillers’ directed by executive producer, Jimmy Fay, and adapted by Graham Linehan from the 1955 film by William Rose. 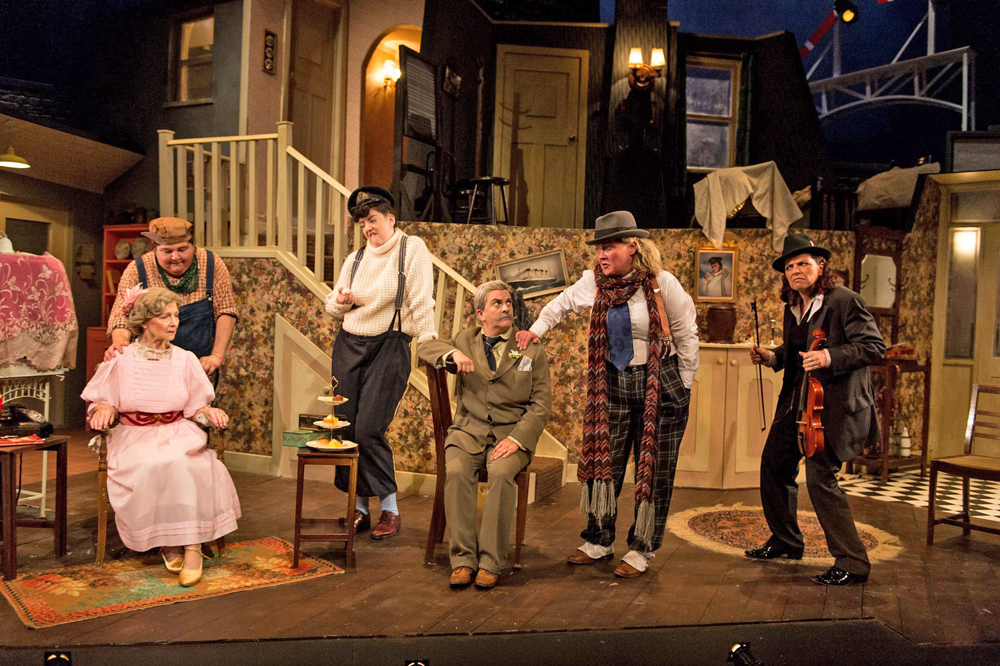 Encompassing three levels of a 1950s home, Marshall’s design is so detailed one feels oneself not sitting off-stage as an audience member but in the heart of the action, standing in one of the rooms listening to the lively conversations.

The comprehensive set includes a ground-floor sitting room complete with glass-paneled front door, a checkered black and white marble-like entrance hall, period table and wall lamps, hanging paintings, and even a hidden cubby hole near the stairs. Wooden bannisters and a carpeted stairwell lead up to a bathroom and a furnished bedroom. There is also a full view of the roof and a railway-crossing sign nearby referencing King’s Cross station, all integral props for the narrative. A loud steam train soundtrack adds a realistic aura as do period costumes by Erin Charteris. 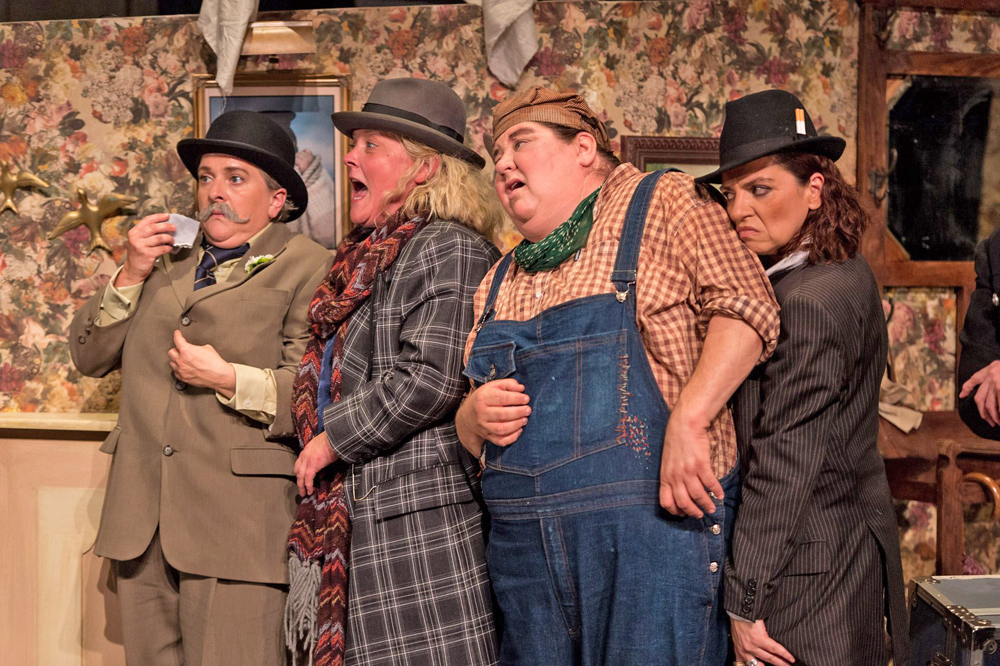 Such lavish and convincing design makes an evening at the theatre all the more delightful, providing an even fuller escape into that other world. This production ends this Saturday (July 8) so hurry along to admire it for yourself.

The play is an adaptation of the classic comedy movie produced by the London-based Ealing Studio and is often described as ‘noir,’ ‘black comedy,’ even ‘morbid,’ but, such are its nuances, ‘beguiling’ may be a better adjective. The plot is simple enough: five robbers intent on a local heist at the station act as classical musicians to fool a genteel old lady who rents them rooms in her ramshackle home. But complications ensue and moral decisions have to be made, with quite a few surprises in store, some involving spectacular roof-top action scenes at the highest point on the stage. 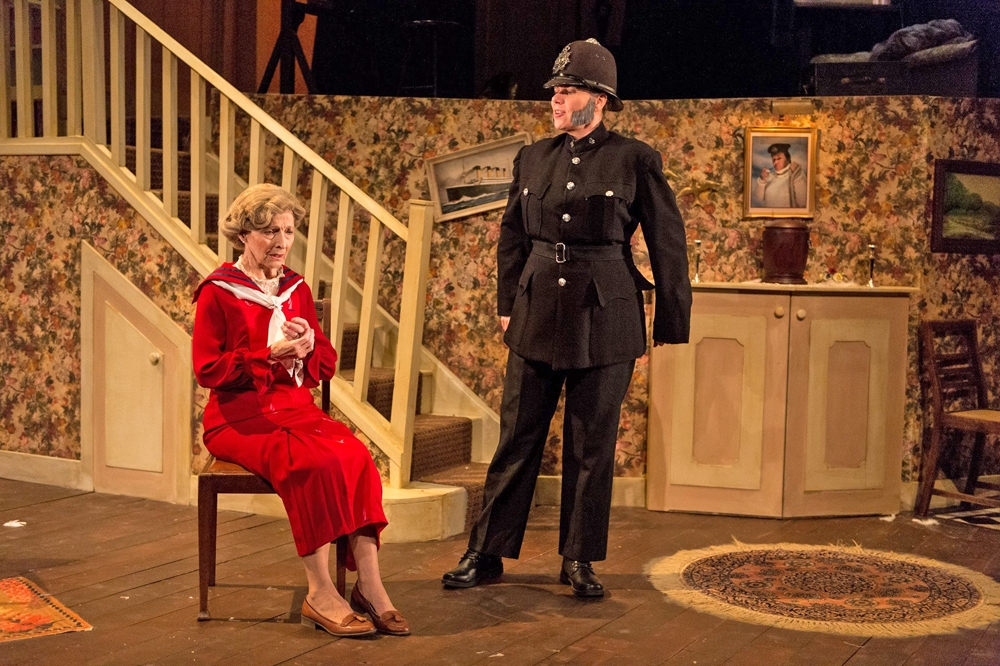 Though dealing in grim subject matter such as robbery, greed and violence, humor is bountiful with lines such as a pet parrot being described as ‘a diseased washing-up glove’ and a ‘starving baby in a sock’ and a reference to poverty being not so much a disgrace as ‘a bit of a nuisance,’ as well as the old lady’s frequent ritual tea offerings being referred to as ‘a geriatric cuckoo clock.’ There is also what can best be described as a ‘musical mix-up.’

Diverse roles are played with panache. Abigail McGibbon, with craft and fast-talking guile as the bogus Professor Marcus, leads the gang and Stella McCusker is porcelain delicate yet quietly determined as the little old lady, Mrs. Wilberforce. Julie Maxwell lends Teddy Boy flamboyance to her pill-popping character, Harry, while Maria Connolly is the dapper hit-man, Louis, from Romania. With fine-timing, Jo Donnelly plays the effeminate, whiskered Major Courtney with notions of cross-dressing while Christina Nelson is a soft, rotund and ultimately lovable, One-Round. Nuala McKeever, fresh from her excellent one-woman production ‘In the Window,’ plays the constable who patiently listens to Mrs. Wilberforce’s tales of woe. 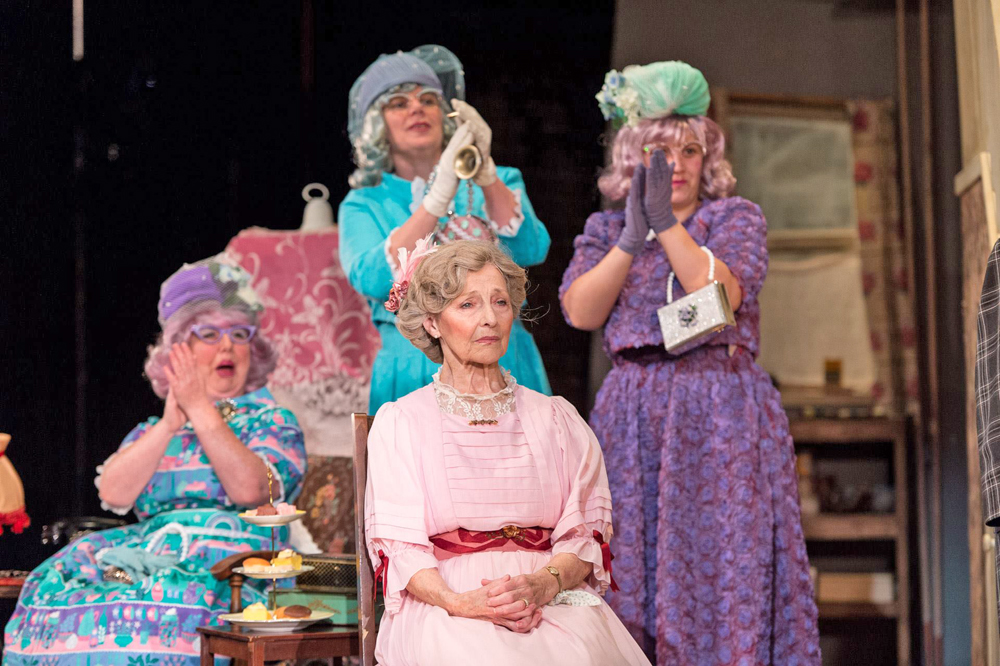 With all the gang roles played by women dressed as men, the overall theme of pretense is emphasized even more. Keep in mind the view that ‘there’s a little bit of good in all of us.’ In great part, the plot hinges on this. Say no more.

Illustrating its wide range of activities, here are just a few of the upcoming events at the Lyric:

‘Let Me Count The Ways’ – a radical new music theater performance aimed at capturing a real snap shot of Northern Ireland today. Conceived and created by Dumbworld, the search is on for 100 people from a broad spectrum of communities, cultures, backgrounds and ages to participate.

‘Gulliver’s Travel’ – a musical adaptation from platinum-selling singer-songwriter Duke Special, comedian Andrew Doyle and the team behind the West End smash hit ‘Once the Musical.’ This show is produced by Youth Music Theatre.

New Playwrights Masterclass – The Lyric Theatre is hosting public workshops led by established writers, directors and dramaturgs, designed to support new playwrights as they develop their skills and their careers. The next free workshop, taking place in the Naughton Studio on Saturday, July 29, is led by Stewart Pringle. Stewart is a playwright, critic and the Associate Dramaturg at London’s Bush Theatre, working to identify and build relationships with new writers, commission new work and guide plays to the stage.

Nestled in the tranquility of Nature deep in the forest, Anna Charisma several kilometers outside the town of Avrig in Transylvania is an elegant holiday retreat complete with outdoor hot-tub, sauna & fine food, with the soothing sounds of a nearby waterfall as an audio backdrop @epic.visits @anna_charisma_chalet #luxurylifestyle #luxurytravel
Experienced #Romanian #tourguide Adela Dadu, a rich font of historical information, leads us on a special carriage ride through the ASTRA Open Air Museum outside #Sibiu #Transylvania #transylvaniaguidesibiu #unforgettableexperience #luxurytravel
Panoramic Skyline Drive in #Romania along the breathtaking #transalpina in the Carpathian #mountains @enterprise_romania #luxurytravel #toyotahybrid
Terrific food presentation of their #tastingmenu by chefs Darragh Dooley and Dario Percic at Killeavy Castle Estate Armagh @killeavycastle #gourmetdining #gourmetfood #luxuryhotels #luxuryhotelsireland #tourismireland #irishtourism #luxuryrestaurants
Looking forward to hosting this practical #workshop on #travelwriting organised by #irelandwritingretreat See details onhow to book on their website #virtualworkshop #travel #writingcommunity
Check out our latest story from #scotland #scotlandtravel #scotishislands #isleofmull #iona #oben
“IQ for Creative Writing - How Questions Shape Stories. The Secrets of Flash Fiction.”
Enjoying my ne #dryrobe when #hiking not only #coldwaterswimming See full story on our website
A treat for the eye at every corner when staying at @waedinburgh #luxurytravel #edinburgh See story on our stay there on our website
Still have time to escape to this #luxury estate, one of its kind, and forget your worries for a while. See story on my website #prestonfieldhouse #edinburgh
I certainly enjoyed my two-night stay at one of #Scotland's leading #luxuryhotels, which re-opens today. Experience plush furnishings, an illustrious heritage & serene, bucolic surroundings
How many types of eatable #seaweed do you know? And can you recognize them in nature? We’ve talked to a #seaweedguru in #ireland🇮🇪, see the story on our bio link and how you can buy her #recipebook
Curious to taste a gin based on a 350-year-old recipe? Try @enjoy_gin1689 See full story on our website in profile @theginguide @ginmagazineuk @gin_member @theginsociety @craftginclub @gin_lovers
Few better ways to survive coronavirus restrictions than in the company of your favorite #wines. This one, a 6-year-old #pinotnoir from the Melville Estate in #California, is among my recent order from @winebuyers which also included choices from the Peter Michael Estate, Knights Valley, Orin Swifts & Herb Lamb. #winesonline
It’s #worldginday #today, treat yourself to real #gin Check my suggestions I’ve put together on my #luxurytravel website in the profile #cocktails #finespirits #ginday
Mere hours before final deadline for the inaugural Wild Atlantic Writing Awards, 500 words, #flashfiction & #nonfiction, 3,000 euro worth of prizes - https://www.irelandwritingretreat.com/post/countdown-to-deadline-midnight-sunday-may-31st
Celebrating #worldwhiskyday was so much fun and read about some of my favorite #whiskey https://worlditineraries.co/2020/05/14/world-whisky-day-travel-with-you-senses%e2%80%a8/
An interesting initiative by @virginwines and @drinks_trust to support #mentalhealth project by #charity @growingwellgrowinghealthy #health #wines #responsability See full story on our website