While ‘eating-on-the-move’ from street wurst vendors is still popular in Berlin, there has also been a fast growth in fine dining options over the last few years, spurred by the increasing numbers of expats moving to the German capital. Here are a few to savor.

One is escorted to table at this popular, downtown Japanese cellar restaurant along a maze of dimly-lit pathways that meander through a tranquil, garden-like atmosphere to private, secluded booths separated by a drawstring bamboo half-curtain. Here, in an upscale, fine-dining Japanese Brasserie environment established by Motoko Watanabe and Shaul Margulies, we enjoyed an 8-course tasting menu while being educated in the art of sake tasting.

After being informed the rice liquor is best taken in a ‘progressive’ manner, we began with the light, floral Sawanoi Souten from Ozawa brewery in Tokyo, followed by the fruity pear-flavored Akane Sasu from Tsuchiya brewery in Nagano, finishing with the Sawahime Premium Hitogokochi with its strong muscat grapenose from Inoue Sekichi brewery in Tochigi. Other tasters in miniature glasses included a honey-dew melon version Kame No Umi Muroka Nama Genshu, the woody Azuma Rikishi Uroko Yamahai Junmai and the more acidy Fuyujikomi Junmai. As for food, customers have the option of à la carte or Omakase menu (a tasting menu). Highlights for us included a bowl of fragrant miso soup with mozzarella, threads of nori seaweed and ume fruit; delicate tuna and scallops with squares of tofu, Japanese persimmon and a tofu and ginger sauce; black cod marinated for three days in the chef’s own special miso; and sashimi-style beef entrecote served with napa cabbage and a sukiyaki sauce. 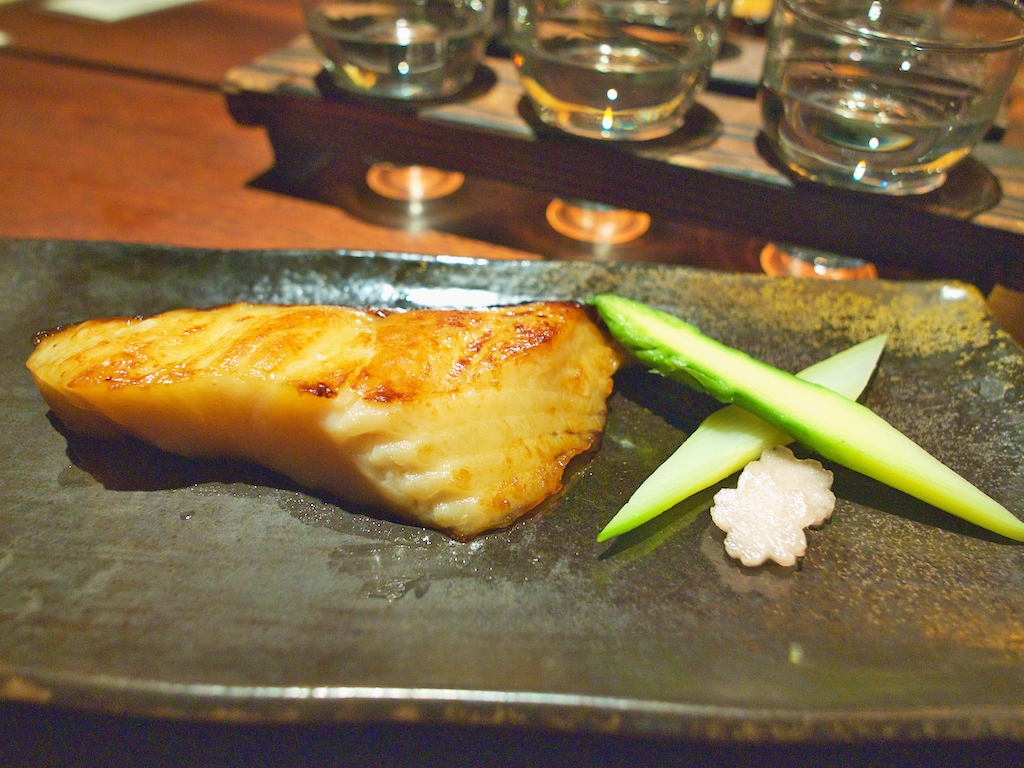 Zenkichi is in Mitte behind the Friedrichstadtpalast, close to Oranienburger Tor. Look for a glass sliding door next to the Rocket Internet HQ and instead of going upstairs to the House of Small Wonder, take an immediate left into the cellar. With mobile phones not working here in the cellar and the maze of pathways with mirrors, a meal at Zenkichi means a refreshing sense of losing track of time and space.

Dining at this restaurant, opened two years ago close to the iconic ‘Checkpoint Charlie,’ is an experience sure to be filled with a few ‘firsts.’ Enhanced personal service begins at its street-side door. Only by ringing the bell do you gain entrance. Clients sit either side-by-side at a wooden counter that wraps itself around an open kitchen, or communal-style at a large banquet-like table with spot-lights hanging from the ceiling. As chefs go about their business, music from a record player lends a hint of old-world charm.

A succession of chefs come counter-side to patiently explain to customers the contents of each dish and how they are cooked. Among our ‘firsts’ were drinking Quince wine and, as a last course before dessert, indulging in smooth liquefied potatoes poured from a glass vase over black-pudding accompanied by Amarsi, a Munich-based double IPA.

Funkiness is the hallmark of this trendy vegetarian restaurant, including access up an alleyway and through a heavy metal door which seems all the world like the rear-end of the kitchen. Saturday night, 10.30, and the place is hopping, with lively chitchat flowing freely from table to table. Above us is a bare concrete ceiling with wiring in full-view clad in plastic protective piping. In stark contrast, tables are covered in immaculate, crisp white linen with flickering candles aglow. Once a cinema storage area and later a nightclub, this is now one of the leading veggie restaurants of the 40-plus that have now opened in Berlin. Kick-off the evening with a choice from the intriguing cocktail list such as ‘Moscow Mule,’ comprising vodka, ginger, lime and cucumber, or a rhubarb vodka. 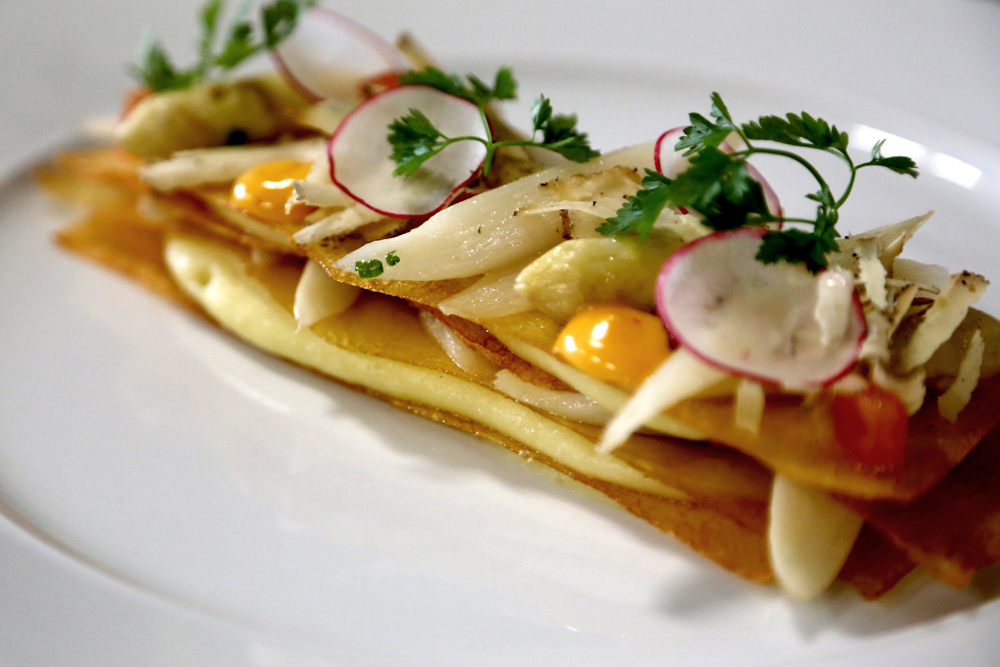 The dinner menu is varied, with five starters including essence of lavender carrot, a leek soup flavored with lavender-infused oil accompanied by a wonton filled with carrot and a pave blanc of goat cheese with pumpkin seeds and rowanberries. Mains that might even convince carnivores to consider meat-less diets range from baked aubergine resembling a chunk of chocolate cake, accompanied by polenta, green beans, peanuts and papadams to parmesan and toasted semolina dumplings in a creamy parmesan soup with shaved Alba truffle, and heart cauliflower with Vadouvan curry, smoked almond and Chinese turnip cabbage. A ‘wow’ dessert will bring you to silence: a Granny Smith apple sorbet with dill oil, roasted oats and fresh dill leaves. For post-dinner drinks, try the powerful house beetroot schnapps or simply step downstairs to the restaurant’s companion bar below, Crackers, with its lively, pulsating music.

Historic and elegant with an intimate, genteel atmosphere, this street-facing restaurant opened in 1952 on the ground floor of the Bristol Hotel Kempinski and offers regional haute cuisine. If you prefer classic-style décor and comfort with candles, fresh flowers and crisp linens, this is the place. Service is attentive and it’s traditional for the waiter to present cuts of meat on a silver platter for you to inspect. Here you can enjoy a four-course menu or a la carte items from a display with plenty of choice. Seating for 35 inside, highlights include a tasty starter plate with a creative seafood twist on the ever-popular currywurst, the filling here comprising salmon and King prawn, as well as smoked breast of duck with foie gras, cranberries and pigeon terrine.

If its soup you savor, an interesting option is to try three different kinds served in individual cups. Mains from the sea include monkfish medaillon under herbal crust with yellow beetroot risotto and fried turbot on peanut purée with shallot foam. Under the charming heading ‘Forest and Meadow’ are flambéed lemongrass skewer of veal fillet and beef fillet tips on rosemary potatoes with fried vegetables and Dijon mustard pepper cream, as well as braised calf cheeks on fried potato mushroom talers with sautéd black salsify. Two excellent mains are the chef’s homemade pasta filled with porcini mushrooms topped with slivers of cod and the venison dish served on red cabbage with knoedel (traditional potato dumplings) and a red-wine sauce. Desserts are a tough choice. Tiramisu with berries and raspberry coulis competes against Bourbon vanilla parfait with pickled kumquats, but if you feel the need for added pampering, try the crêpes Suzettes flambéed table-side. A ‘secret’ room at one end of the restaurant, known as the KPN room, named after the Royal Porcelain Factory, is suitable for private parties, sealed off behind an electronically-operated sliding panel.