That ‘The Langham,’ five-minutes from London’s Oxford Circus, is a favored hotel for international visitors becomes obvious by the sight of two Japanese men outside wearing Scottish kilts posing for photographs while inside a group of elegantly-dressed Chinese women chat excitedly while holding tight to their Harrods shopping bags.

Built in 1865, and one of London’s earliest grand hotels catering for tourists traveling there on the developing railway network, this 380-room, five-star property stands proudly, solemnly Victorian directly across from the BBC, the company that owned it until 1965 before selling to the Ladbroke Group. A member of the Leading Hotels of the World, it is now the flagship of Hong Kong-based Langham Hotels International.

Photo by The Langham Hotel

Access is through an impressive rotund stone portico supported by columns with a short set of steps leading from it inside past eight sturdy brown and gray marble pillars, which together with a decorative ceiling and huge vases of pink roses create an overall sense of stately elegance. This feeling is further enhanced by an ornate wrought-iron gate directly in front, the entrance to the Palm Court restaurant, which officials say served the first commercial afternoon tea 150 years ago. A broad carpeted walkway leads to the left to the award-winning Artesian cocktail bar and to the right to the reception and concierge desks and a business center featuring a bank of computers, soft armchairs and coffee tables piled with books. A winding staircase leads to floors above and elevators to the executive Langham Club lounge on the 3rd floor.

Our room was one of modest space, certainly compared to most American hotels of this category, but quiet and comfortable, with views towards Oxford Circus.
To celebrate its 150th anniversary last year, the hotel completed major renovation, with the Regent Wing comprising over forty guest rooms and suites designed by Richmond International, marking the first phase. This was followed by the launch of the Sterling Suite, London’s largest suite at 450 square meters and a maximum configuration of six bedrooms, and the Langham Club. Operating from early morning until 11pm, the club is a highlight of the hotel, providing butler and specialist concierge services and private showers and changing facilities for guests requiring early arrival and late departure. 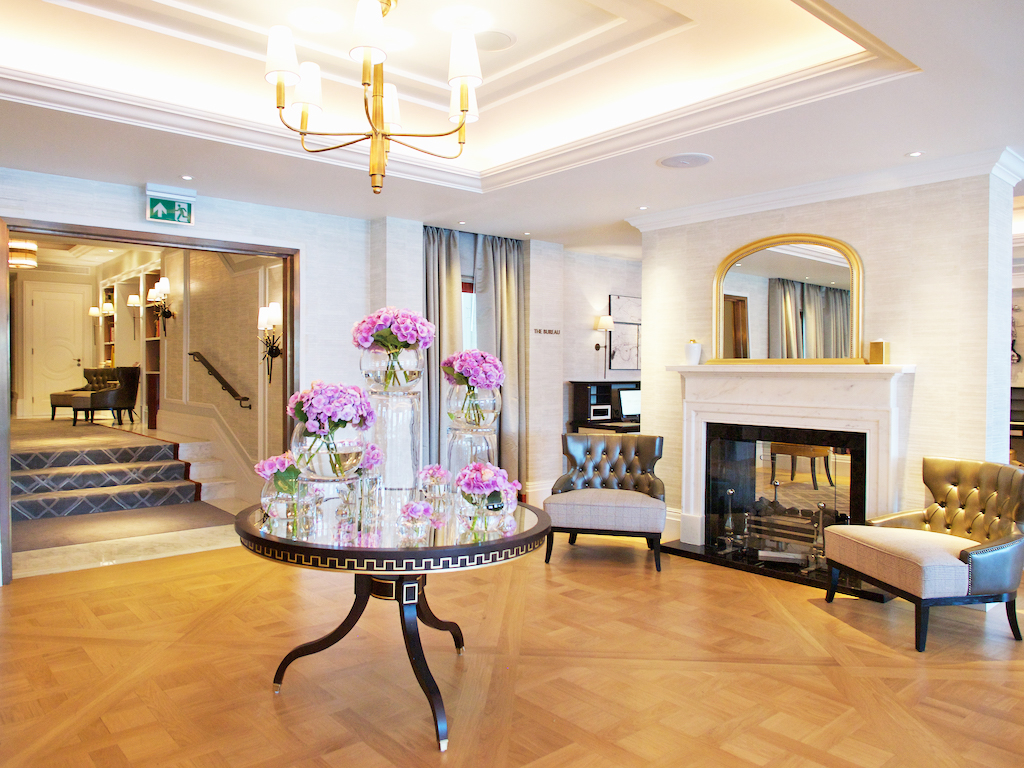 Membership also includes premium broadband Internet access, the pressing of three items of clothing upon check-in and up to two hours use of the club’s loft events space per stay. Designed across two floors with glass tables at one end and soft armchairs and settees at the other, the lounge features a corner library with computer stations and an impressive range of complimentary bite-size foods. Short of time after a shopping trip and in a rush to a West End theater show, we enjoyed mini-snacks of hummus, salads, cheeses and sandwiches that more than satisfied our palettes. Complimentary drinks include classic cocktails such as Mojito, Manhattan, Cosmopolitan and Negroni from the Artesian bar below.

Dining at the Palm Court is a lavish affair, with an atmosphere characterized by lush fabrics and rich colors. Chandeliers, potted palms strategically placed around the room, comfy armchairs, wall and ceiling mirrors and a huge centerpiece of roses in a vase grants it a nostalgic 1930s era ambience. One half expects Glenn Miller and his orchestra to step out from behind a curtain and play a few tunes. Our dinner comprised brandied lobster bisque, tender Scottish Buccleuch ribeye with chives and Marchand de Vin sauce, and a dessert of praline profiterole with chocolate sauce and caramelized hazelnut. Live jazz is added to the mix on Friday and Saturday nights.

An alternative to the ‘Palm Court’ is ‘The Landau,’ which the hotel describes as serving ‘modern interpretations of classic French cooking from father and son Michelin chefs Albert and Michel Roux Jr.’

Evenings at ‘The Langham’ are not complete without a leisurely cocktail in the Artesian bar named after the deep well located under the property. Ornately decorated with mirror paneling and crocodile leather-clad furniture, its impressive drinks menu includes such memorable names as ‘Suspended in Time’ ‘Your Room Or Mine’ ‘Last Wish’ and ‘Always Print the Myth.’

The history of the Langham deserves further explanation due to its intriguing nature. Frequented by journalists during World War Two, it was bombed by the Nazis during the Battle of Britain, though not severely damaged. Aside from journalists, an infamous spy also stayed there. Guy Burgess, known as one of the ‘Cambridge Five’ because the group of spies attended that particular university, fed official secrets to Russia during the Cold War. A BBC internal memo reveals that upon being unable to access his room in the hotel late one night, Burgess attempted to break down the door with a fire extinguisher.

Having bought the hotel after the war, the BBC established a club there and recorded various programs, with literary celebrities such as Brendan Behan, Louise MacNeice and Dylan Thomas enjoying its comforts. Thomas’s radio play ‘Under Milk Wood’ was first broadcast from The Langham while Arthur Conan Doyle set Sherlock Holmes stories such as ‘A Scandal in Bohemia’ and ‘The Sign of Four’ partly at the Langham. Other celebrities who have stayed at the hotel have included Mark Twain, Winston Churchill, Charles de Gaulle, pop singer Elton John and Irish actor Colin Farrell.  Lady Diana, Princess of Wales, and actress Lisa Minnelli are reputed to have enjoyed a long tête–à–tête there after the premiere of the movie, ‘Stepping Out.’

With its colorful wartime past, strong links to the BBC and proximity to shopping and theatre districts such as Carnaby Street, Piccadilly Circus and Leicester Square, ‘The Langham’ has become a classic English institution well worth a visit.