What began its artistic life six years ago as the hit song ‘Paddy’ by Mayo-based songwriter, Gerry Carney, has resonated so well with Irish emigrants near and far it has now transformed into a stage musical that has people weeping in the aisles and the performers lauded with standing ovations in theaters nationwide.

That was certainly the emotional response from an appreciative audience Sunday night in Derry’s Millennium Forum as a fine cast led by talented singer, Tommy Fleming (who has sold more than three million albums), combined to produce a highly entertaining – albeit sad and bittersweet – show. 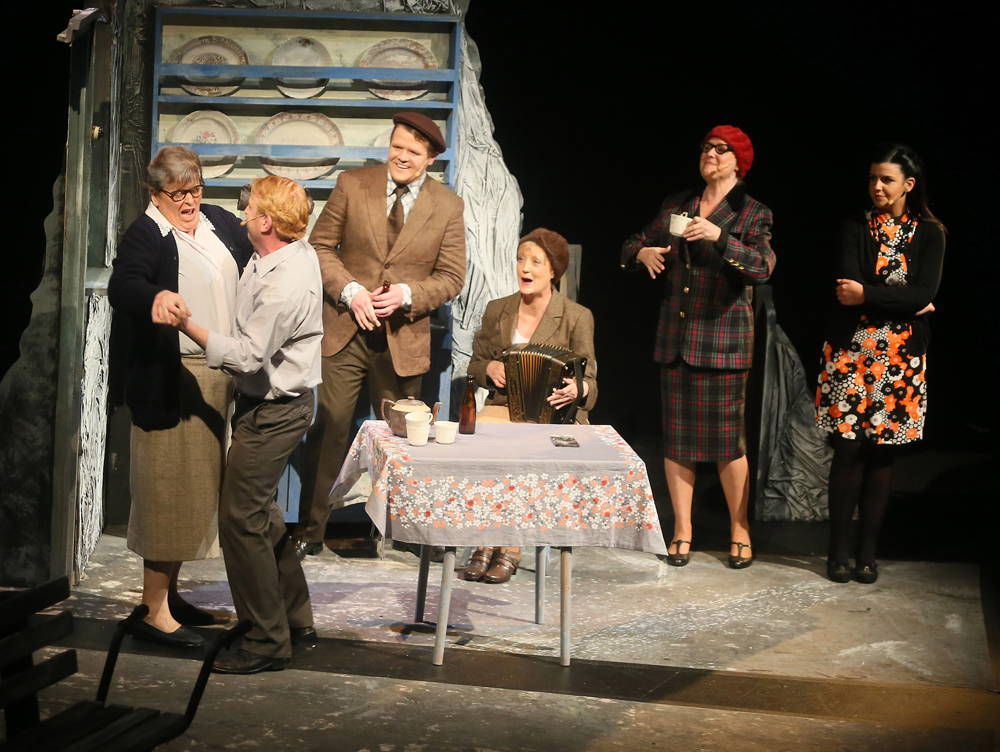 Patrick Murphy, (Tommy Fleming) with his mother Bridget Murphy (Eileen Slevin, Glenfarne Co Leitrim) in the scene before he leaves for England in “Paddy” a Musical Drama on Irish Emigration. Photo by Michael Donnelly

With a strong script and fine acting, the storyline at times borders on the maudlin but is saved from such criticism by its telling of a story that is, alas, all too true – about Irish navvies, many from small rural communities, having to leave for London looking for work in the building trade, with some tragically ending up as one actor says, with “lives and dreams shattered by the companionship of pubs.”

I can vouch for this. Many years ago, like thousands before me and since, I too went off to seek work on London’s construction sites, living in dismal, tiny rooms in places like Cricklewood, Kilburn and Neasden, and experienced full well the hard lives endured by many Irishmen and the penchant for some to escape into the neck of a bottle. As one line from the song ‘Paddy’ says, ‘Was it the rain or the shovel, / Took the strength from his limbs away.’

Lovers of ballads will be delighted with ‘Paddy’ for it offers many such songs with powerful lyrics, including ‘I Can See Clearly Now’ sung by Fleming, who also plays the lead character, Patrick Murphy, who leaves Ireland for work in the 1960s. Performed in his characteristic clear voice that my companion on the evening described as “soft and sweet as honey,” the song depicts the young emigrant reviewing his life as he slips slowly into alcoholism, with a powerful message delivered in the line, ‘What started out as laughter has ended up in tears.’ Another fine ballad by Fleming on a similar theme is ‘The Fool Who Lost It All,’ as Patrick questions his life, asking himself introspectively whether he is, ‘the man who made it happen or the fool who lost it all.’ Try holding back a tear as he sings the heartfelt ‘Goodbye My Old Friend.’

Carney who depicts ‘Paddy the Shovel’ wonderfully as an older, disillusioned, alcoholic Irish navvie who befriends the young Patrick, also performs flawlessly the song, ‘Far Away’ about acceptance of his own death from liver cancer (his makeup superbly illustrated the slow progression of his illness). Michelle Lally, former lead vocalist with Franky Gavin and DeDanaan, also deserves credit for her role as ‘the girl left behind’ in Ireland
(good Irish stories often start with lost love) and for her sweet, singing prowess.

While the songs in the musical are largely melancholic and nostalgic the lively authentic dialogue throughout offers some light-humored respite, especially in the testy exchanges between the characters of ‘Paddy the Shovel’ and his side-kick, Billy Salmon, played comically by Tommy Marren. Phrases like ‘You’re as useless as tits on a bull,’ ‘She’s got a tongue on her that would clip a hedge’ and ‘You’re as tight as a duck’s arse’ come tripping off their tongues effortlessly. There is also a hefty dose of homespun philosophy, as when ‘Paddy the Shovel’ offers advice to the young Patrick with the line, ‘You’ll never plough a field by turning it over in your mind’ and when he chides him for being naïve, asking him if he washed his face, then telling him to, ‘wipe the word idiot from your forehead.’ 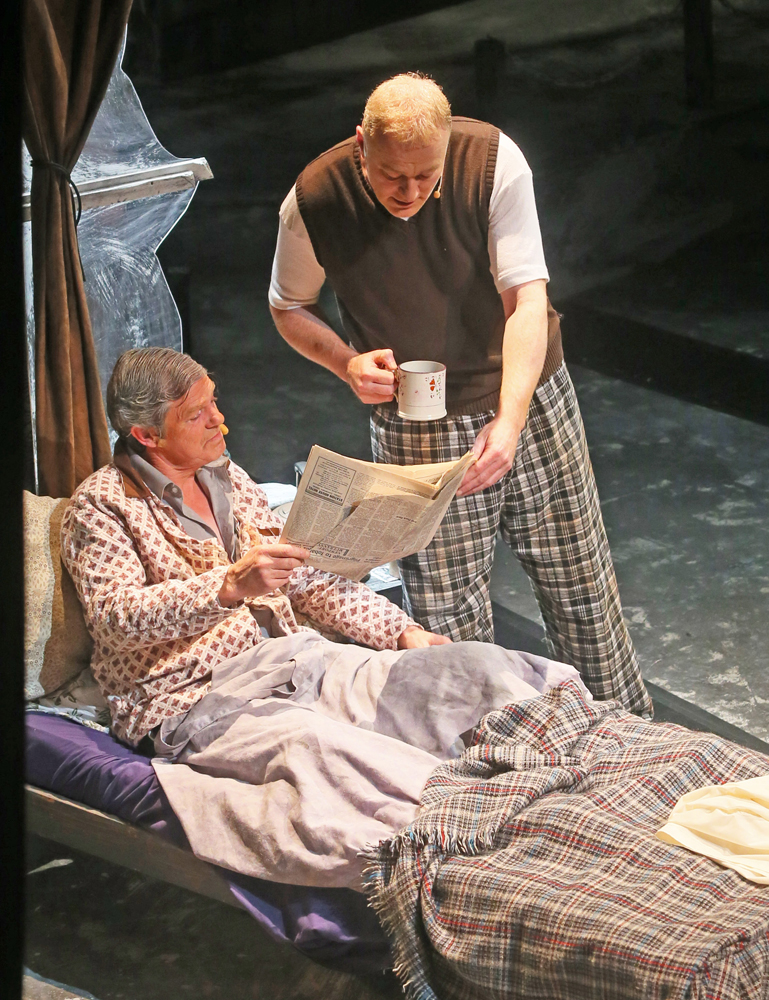 Paddy “The Shovel” Kennedy (Gerry Carney) and Billy Salmon (Tommy Marren) in their flat in London in “Paddy” a Musical Drama on Irish Emigration. Photo by Michael Donnelly

While the despondency of leaving rural life for ‘the concrete jungle’ is well depicted, a sense of Irish pride is also displayed, in lines such as, ‘We weren’t built for cities but we built them just the same.’

Full credit goes to director, Tommy Marren, for a two-hour production comprising 12 original songs that captures the overriding sense of desolation and loneliness of Irish emigrants ‘caught between two worlds’ and for stage highlights such as a brilliantly silhouetted piece of creative choreography in the opening of the second act illustrating laborers at work on a building site. As for the on-screen ballet dancer, dear reader, you can be the judge of its artistic merit.

One thought on “‘Paddy,’ a well-scripted musical, highlights the plight of Irish emigrants”