With 180 different nationalities and 45 per cent ethnic minorities, Amsterdam’s population is one of the most diverse in Europe, impressive statistics that are reflected in its diversity of cuisine. Here are a few restaurants, from Indonesian to Italian, well worth visiting.

Industrial-style design is obvious in the décor – high-ceiling, bare brick walls, hanging table lights and library-like stacks high up on the walls filled with an eclectic mix of scrolls, books, wine bottles and Oriental vases. Windows overlook the peaceful hotel garden so plenty of light flows in highlighting a rich assortment of potted plants around the room. At first glance an impressive drum standing in one corner seems incongruous but it is actually the restaurant’s namesake, an ancient Japanese drum ‘taiko,’ meaning ‘fat drum,’ that is said to beat with a mythic rhythm. With its open-kitchen style, clients enjoy a full view of chefs busily composing dishes behind what resembles a huge ‘glass box,’ its walls rising vertical all the way to the ceiling.

The comprehensive menu offers guests the choice of either a typical ‘one-soup, three dish’ meal or a more exotic culinary adventure with a full eight-course tasting menu. Such is the array, from monkfish in green curry coconut and langoustine in katafi pastry to gyozas (pan-fried dumplings) filled with duck and tiger prawn with kimchi, even Emperor Akihito himself would be pleased.

Top spot is claimed by hida gyu Wagyu beef, with ‘Taiko’ being the only restaurant in Holland, according to officials, serving this highly prized meat. Offered also a la chart Sukiyaki-style or as an entrecote, it was creatively presented atop a small ceramic grill filled with the charcoal still warm indicating the cooking process was still underway. This much-praised juicy meat lives up to its reputation, its high degree of marbling making it as tender as mousse. It’s enough to make one wonder if it had not been whipped with egg white and reconstructed to resemble beef. Deserves to be eaten in silence.

Within a few tram stops of Dam Square and within close walking distance of the ‘Boom Chicago’ improv comedy venue is ‘Jun,’ (pronounced ‘Djoen’) a charming Indonesian restaurant behind a simple wood and glass façade street-side at 98 Frederik Hendrikstraat.

Owned and managed by a friendly pair, Edy Jun, also known as ‘Batang’ (‘Little Stick’) who hails from Lombok Island near Bali, and his partner Jan, the interior is no way ostentatious, reminding one more of a simple, cozy living room at home. Service is friendly and efficient and warm familiarity between staff and clients indicates it’s popular with locals, a sure sign food quality is of a consistently high standard. 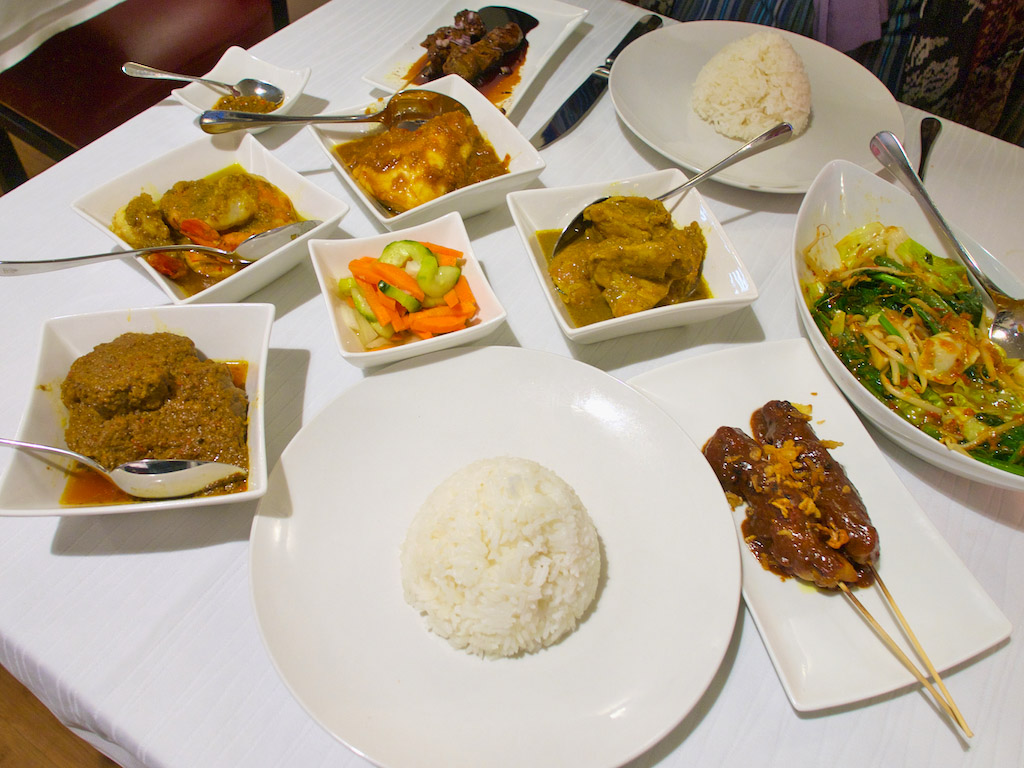 Due to the Netherlands’ colonial history in the Far East, the Indonesian restaurant scene in Amsterdam is a vibrant one and ‘Jun’ stands proudly among the best. Ordering ‘rijsttafel’ is probably the best strategy for those not overly familiar with this particular ethnic cuisine. The word literally means ‘rice table,’ akin to a tasting menu, an assortment of the most traditional dishes which can be shared or eaten singly. Some dishes will be familiar such as the chicken satay, which was well-balanced, not too sweet, having been slowly cooked, even having what seemed a hint of chocolate flavor in it, and beef rendang. Soto ayam comes as a healthy broth of green shallots and chicken chunks. The homemade pangsit goreng are also outstanding – deep-fired wonton filled with meaty mixtures. Overall, the varied ‘Jun’ menu is one that should suit all tastes, with sweet-hot-sour vegetable salads, prickly soups, chicken, lamb, beef and fish, particularly sea bass, marinated in spices and sweet, sticky chilli jam. A refreshing Chilean Chardonay Semillon 2015 acted as a perfect complement. To practice your Indonesian, try ordering some of the items in the native language, such as jukut urap, acar campur and nasi putih pandan. Many of the dishes are cooked in a delicious homemade bumbu sauce.

Dining unexpectedly, but romantically, by candlelight at this fine Italian restaurant was a most memorable experience, made possible by the sheer coincidence of being there when the hotel, in support of environmental conservation efforts, turned out all electric lighting on the property, creating an almost surreal atmosphere.

Notwithstanding, this spacious ground-floor restaurant is an attractive place, elegant in an under-stated way, featuring a modern-classic interior reflecting the atmosphere and ambience of ‘50s and ‘60s Italy, with a striking fireplace in the middle. 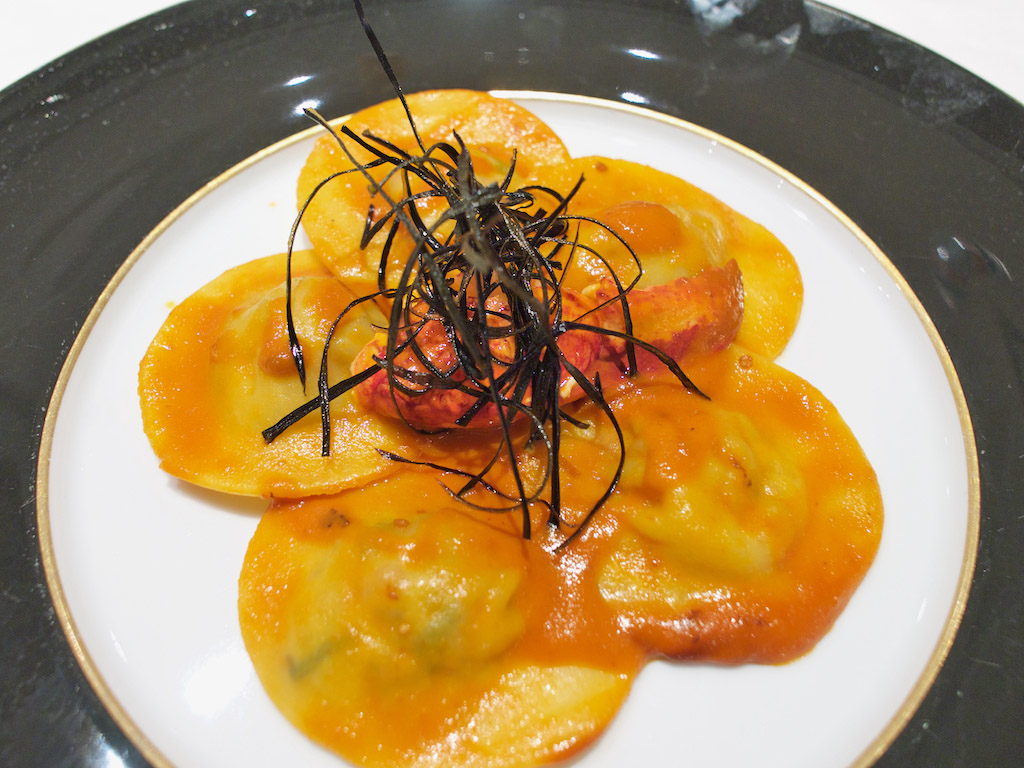 ‘Pure Italian cuisine’ is the header at the top of the menu, a precursor to executive chef Franz Conde to create his own versions of classic recipes. A tartar of hand-chopped sea bass with Umbrian olive oil and fried samphire and a paper-lined basket of crispy large prawns dipped in green Ligurian salsa that were so well cooked even the jackets were deliciously edible acted as fine introductions to the four-course dinner. This was followed by home-made ravioli with lobster served in a bisque that made ‘scarpetta’ a compulsory act. Then it was straight to the mains  – a classic tournedo Rossini, a smooth fillet of beef with foie gras, madeira and truffles first made by French chef Georges Auguste Escoffier for the composer Rossini, and a succulent rack of lamb with Sardinian artichokes. For dessert, we had eyes only for the homemade tiramisu, served as per proper tradition – in a glass on a laced paper covered plate. Such is the quality of the menu recipes for the dishes at Roberto’s are now compiled in a book available at reception.

Named after Volkert Jansz, a 17th century merchant who owned many of the city’s canal townhouses, the Pulitzer Hotel’s chic restaurant ‘Jansz’ has become a popular choice for both guests and those seeking a break from splurging in the nearby De Negen Straatjes (Nine Streets) shopping district.

In his interior design, Jacu Strauss, has maintained many of the key historical elements, refurbishing them to suit the intended ambience. As illustration, the building in which ‘Jansz’ is housed was once an apothecary so the restaurant’s entrance foyer is adorned with bell-jars in glass cabinets, old bottles lining the walls that may once have contained medications of one kind and another, vintage looking moss-green benches and a beautifully restored decorative ceiling.

The U-shaped restaurant, divided into three spaces, is painted in elegant blue and pink tones with artwork on the walls celebrating the illustrious history of Dutch painting. Partial wood paneling, varnished flooring and minimalist furnishings grant the space an informal ambience.

Mirroring the Dutch spirit – open, cosmopolitan and direct – the ‘Jansz’ menu is of the no-nonsense, Nordic-bistro variety, making full use of local produce such as Reypenaer cheese for hamburgers and Opperdoezer potatoes for side dishes. Items are simply stated with no formal fuss over titles – sole meuniere, rib-eye steak, tuna tartar, diver scallops. The tartar resembles a ceviche and is seasoned with coriander, yuzu and wasabi and the scallops are presented au natural in their shell on a bed of English peas puree with a sprinkle of bacon crisps. Try the kale Caesar salad. Blended with a hint of mint and Serrano chili, it’s more zesty than the classic romaine lettuce. Satisfying both savory and sweet yearnings, one can choose to end the meal with either a delectable New York cheesecake with pistachio sorbet or a platter of local cheeses. As for digestive cocktails, step into the intimate Pulitzer Bar next door and try a Sazerac, made with Chateau Montifaud cognac, Bulleit rye whiskey and Peychaud’s bitters or a Bronx, a mix of Tanqueray gin, Noilly Prat, cocchi vermouth di Torino and orange juice.

For something completely different, enjoy dinner and drinks while floating leisurely along the city’s enchanting canals, magically illuminated by night. Hosted by Holland International, guests are welcomed abroad with a pre-dinner drink and an amuse-bouche of pumpernickel bread with Dutch goat cheese and fig compote, before settling in comfortably at-table for a pleasant, unhurried two-to-three-hour journey. The five-course menu prepared on board by chef Debbie van der Molen and her team is a varied and substantial one starting with a choice of three salad starters – baby potatoes with Parma ham, pickles and crème fraiche; fresh quinoa with mange-tout, peas, French beans and baby corn served with Leyden cheese and sun-dried tomatoes; or baby potatoes with smoked Scottish salmon. 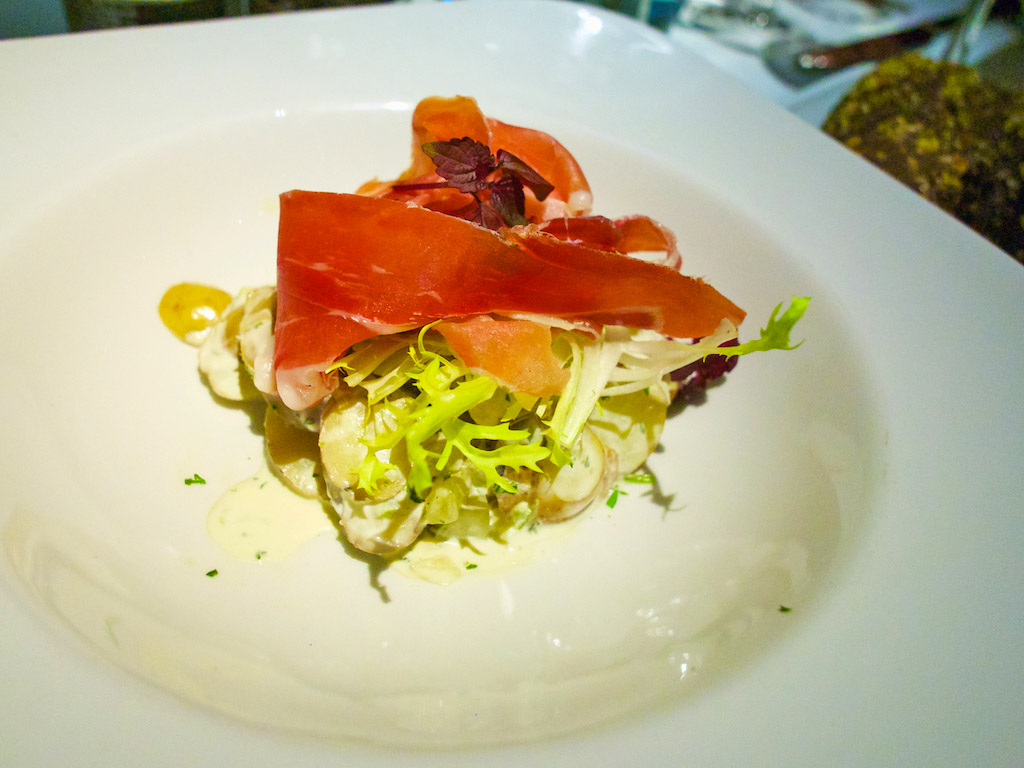 An extra course is cappuccino of red pepper. There is also a three-course choice for entrees – veal escalope with mousseline of potato and fennel and a mix of Dutch vegetables; sea bream ‘en papillote’ with the same accompaniment; and lasagna of roasted vegetables with pesto of rocket and Old Holland cheese. Dessert featured a Dutch specialty – bitterkoekjes (traditional macaroons) with mousse and light vanilla curd with a summary of rhubarb compote, strawberries and a kletskop (a local biscuit). Other varieties of Dutch biscuits, speculaas and stroopwafels, are served later with coffee or mint tea. The dinner cruise is one of a myriad of activities offered by GetYourGuide, a thriving company that organizes guided tours, cooking classes, sightseeing buses and canal cruises. It recently expanded into six global markets and opened offices in Berlin, Las Vegas, and Zurich.