With ratatouille originating in Nice (from ‘touiller’ meaning ‘to toss food’) and a campaign for Niçoise cuisine to gain UNESCO ‘intangible heritage’ status well underway, chefs in this French Riviera city boast of having that something special. With 35 certified traditional restaurants, a culinary search can lead to some very tasty rewards. Here are a few restaurants to help set you on your way.

For a touch of down-home authenticity, there’s nothing like ‘Chez Pipo’ on Rue Bavastro. Established in 1923, its sparse menu of Niçoise-style tapas on a scrap of laminated paper has attracted generations of families flocking here for their crisp-topped homemade socca – chickpea paste baked like pizza on giant pans on a blazing wood-oven that stands just inside the front door. Decor here is basic but oddly attractive – a combo of bare rock walls and natural wood panelling with a few old black and white framed photographs and brass souvenirs scattered about. For fun, sit outside street-side on wooden tables and chairs or be more adventurous and sit in the back of the restaurant’s van that’s parked there.

In addition to its famed socca, ‘Chez Pipo’ also serves snacks of pissaladière – squares of focaccia-like bread topped with caramelized onions, olives, garlic and pissalat (anchovy paste) – and mini pan bagnats – crusty-topped buns with brioche-like texture filled with egg, fresh green onion and tuna. You can also enjoy mesclun, a mixed salad of ten different local leaves, or choose from a selection of tapenades, including a tasty artichoke variety, which you spread on a platter of toasted tartinades. Dessert is the traditional tourte aux blettes (Swiss chard cake), made with pine nuts, apple and raisins.  Young owner, Steeve Bernardo, who took over the restaurant seven years ago, also serves his own brand of wine, a Cotes de Provence Chateaux Reva, La Motte. Such has been his culinary success, a new ‘Chez Pipo’ will open at Nice airport before year’s end.

Feeling nostalgic? Try this bright and cheery ground-floor restaurant at Nice’s most illustrious hotel, Le Negresco. With gaily-painted pink and blue hobbyhorses throughout the room, tables designed as carousel rides, aqua marine walls and a ceiling adorned with sketches of infants at play, the mind will flood with fond memories of childhood. Here, below an upstairs balcony, a Bohemian crystal chandelier and an elegant balustrade, we sat on soft, pink armchairs decorated with gold tassels, awaiting a lunch prepared by chef Jean Denis Rieubland, who harvests some of the vegetables on the menu from his own garden where he uses restaurant leftovers for compost. 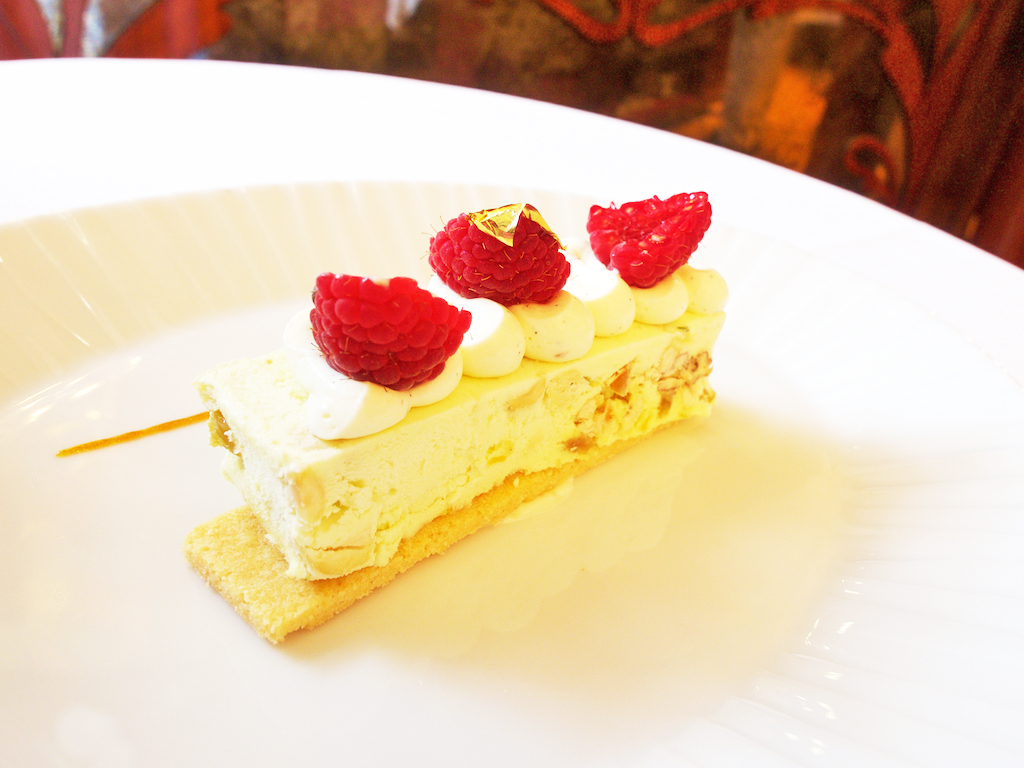 We recommend to start with a Negresco-style Niçoise salad – crunchy radish, generous slices of pan-seared, sliced tuna. And, true to the recipe – no potatoes. For the main, a traditional special reminiscent of the French Riviera is a fine choice – sole meunière, served as two skinless, deboned filets accompanied by a separate bowl of mash potatoes mixed with chives. Being so delectable, selecting just one French dessert is always a challenge but in the end a mille-feuille style pistachio parfait, a mélange of dried fruits, nuts and chantilly cream struck a balance between health and decadence. 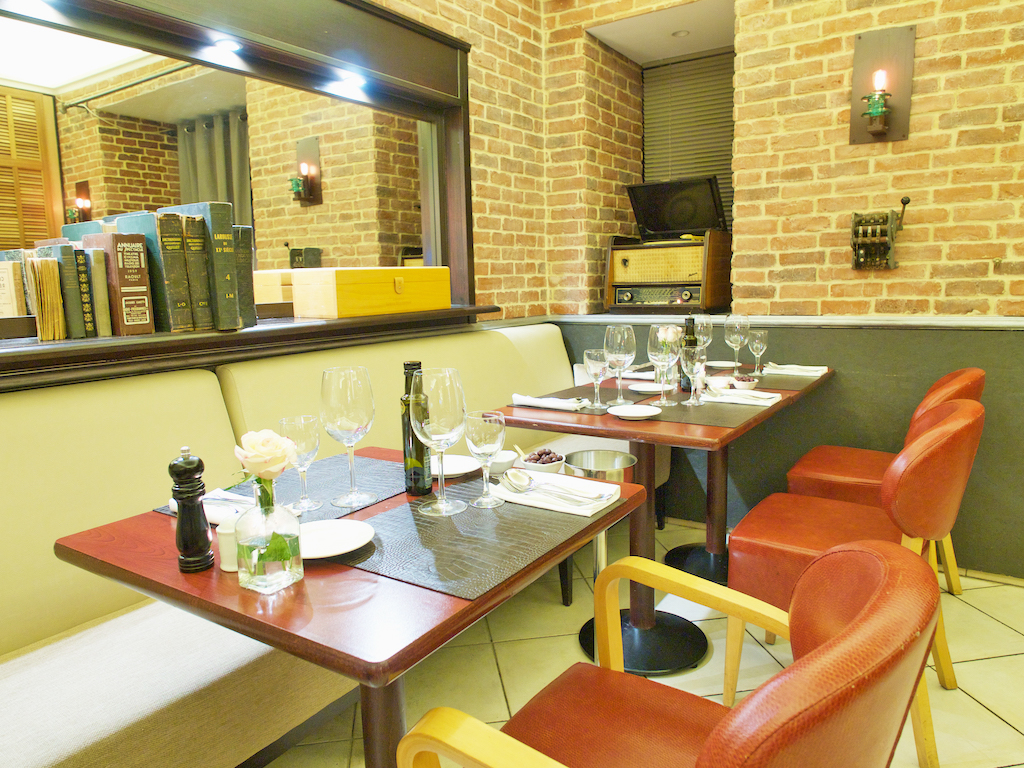 Opened less than a year ago by chef Cyrille Billa and Gauvain Torrearossa, this cozy, chic restaurant just outside the Old Town features bare brick walls, a white tiled floor and comfortable leather armchairs. A wall wine rack nearby displays an impressive collection – some of which we savored, pairing with each course, including both red and white Francois Chidaine, a Touraine wine from the Loire Valley.

For your opening gambit try a nougat of goat’s cheese, a combination with dried apricots and hazelnuts creating a smooth blend of sweet and salty that will set your taste buds in motion; or the minestrone soup of heirloom vegetables, foie gras stuffed chicken breast and Jerusalem artichoke crisps. Four coins of stuffed squid with black olives and pilaf, the rice cooked in a rich stock reminiscent of bouillabaisse and decorated with delicately thin wafers of Parmesan, is evidence enough as to why the restaurant fills up quickly even midweek. If one need further proof, try the almond stuffed pigeon with vegetable tart – the sauce carrying the essential flavors of ratatouille and the breast of bird stuffed with a pate of internals and foie gras.

To prepare for a night on the tiles, spoil yourself with rich desserts such as lemon or Grand Marnier soufflé, a lesson in precise pastry-making; or a mille-feuile with four varieties of plums soaked in Armagnac. 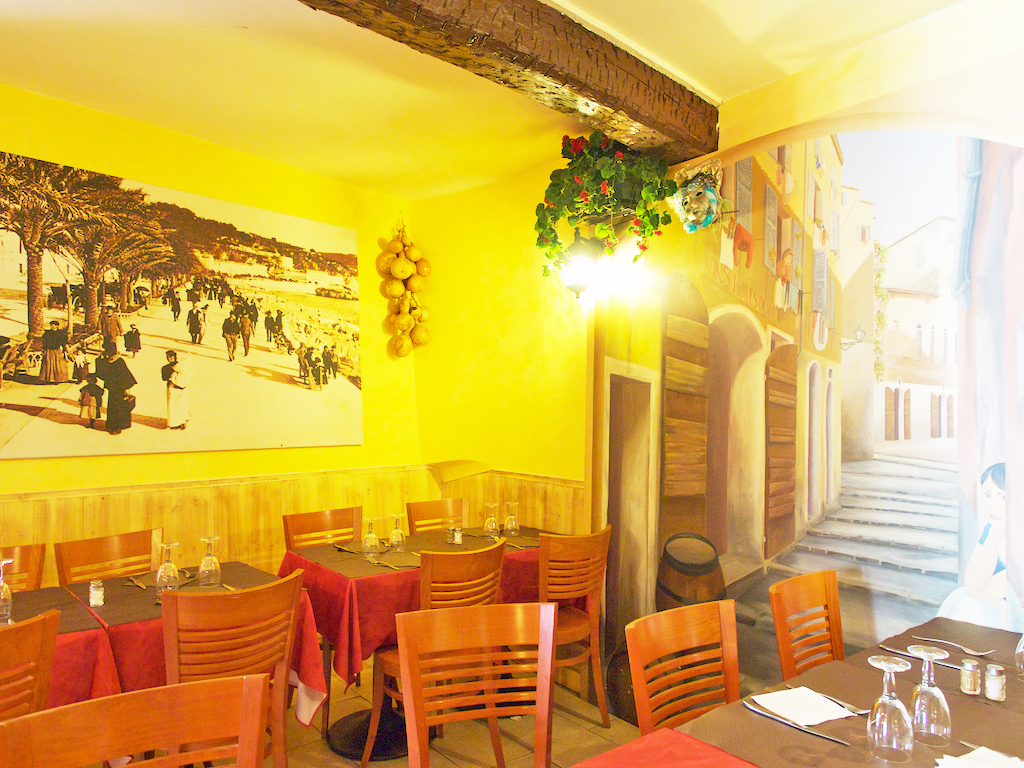 After strolling the store-filled winding streets of Old Town, take time to linger over lunch near quaint Rossetti Square at one of the designated traditional Niçoise restaurants, Lu Fran Calin. Owned by friendly local chef Daniel Silvetti and his Italian-born wife, Elvira, this is the perfect place to taste Niçoise daube, a rich beef stew cooked with red wine and porcini mushrooms served over gnocchi. If in the mood for a lighter version, opt for the ravioli stuffed with daube. Fancy sharing? Then the house platter is just the ticket, allowing you to enjoy a host of flavors such as pickled sanguine mushrooms with fennel, pissaladière, petits farcis (stuffed baked vegetables), flan of ratatouille and fish, pesto polenta and fresh tomatoes and mozzarella. Mouth-watering gems sparkle on the dessert menu – salted caramel mouleux, orange blossom flavored crème brulee and apple, figs and pistaccio crumble.

Interestingly, Daniel is one of a group of local chefs lobbying for Niçoise cuisine to be designated UNESCO heritage status.

Promenade des Anglais, or La Prom as it’s called colloquially, is a must-do walk when visiting Nice, with the Mediterranean Sea on one side and striking Belle Epoque architecture on the other. As it’s seven kilometers long, you’ll probably be tired before the end, so plan to stop at ‘Le 223,’ a contemporary restaurant in the Radisson Blu located along the route. Here chef Christophe Vandewinckel has created his own version of the famed Niçoise salad, with soft-boiled egg over cooked vegetables sandwiched between sables of parmesan on a fan-shaped base of fresh, thin cucumber slices.

As long walks tend to make one hungry, perhaps an entrecôte of Angus beef is in order, adorned with roasted endives, baby carrots, borage flowers, cherry tomatoes, all resting on a bed of puffy potato cloud. If not entrecote, but still feeling the need to replenish lost protein, steak tartare is an excellent alternative presented elegantly like a miniature fiesta float decorated with pickles and herbs and even colorful pansies – a reminder of the city’s reputation as a carnival destination. And no better digestive to finish with than a verbena-flavored strawberry minestrone with a refreshing sorbet.

From earthy to chic, hearty to sophisticated, downtown to waterfront, Nice is a cornucopia of choice for the gourmand traveler.

One thought on “Five restaurants in Nice you should visit”