While it never issued a formal public apology on behalf of the nation for not supporting the 1916 Revolutionaries whose sacrifices helped establish the Republic of Ireland, the Irish government this week funded a series of events in tribute to those who died during Easter week a century ago.

The one-week long revolution failed in great part due to disagreement among some rebel leaders as to whether it should go ahead, leaving many nationwide not taking part. Captured rebels were booed by Irish people on the streets of Dublin as they were marched off to prison, but executions of the leaders by British firing squads ignited a nationalist flame that led to part of Ireland winning independence several years later.

Beautiful weather, the best in Ireland this year, attracted tens of thousands of people to the streets of Dublin, to wander some of the sacred places tread by rebel leaders such as James Connolly, Thomas Kent, Michael Mallin, William Pearse, Michael O’Hanrahan, and company. Many of the men and women wore turn-of-the-20th century clothing, including tweed waistcoats, flat-caps, bonnets and brogues.

Being from West Belfast, I was delighted to learn that security for the 1916 commemorations in Dublin was organized by a company owned by Andersonstown-based, former Republican prisoner, John Trainer. I guess all that experience in ‘security operations’ over the last few decades up in northern Ireland helps.

My own brother, Joseph, an Irish prison officer and some of his colleagues were selected to participate in a three-hour march on Easter Sunday around Dublin, including its main thoroughfare, O’Connell Street, which faces the General Post Office, the rebel headquarters. Joseph was also chosen to impersonate a member of the Irish Citizens Army, one of the two main Irish groups taking part in the revolution, and dressed up in suitable 1916 attire to re-enact the Battle of Ashbourne, the only victory in the entire revolution. He also took part in a ceremony at Dublin’s Liberty Hall, prominent trade union headquarters at which rebel leader, James Connolly, was a member, and for which the Citizens Army was the military wing. President Michael Higgins, long-time member of the Labour Party, spoke at that event. 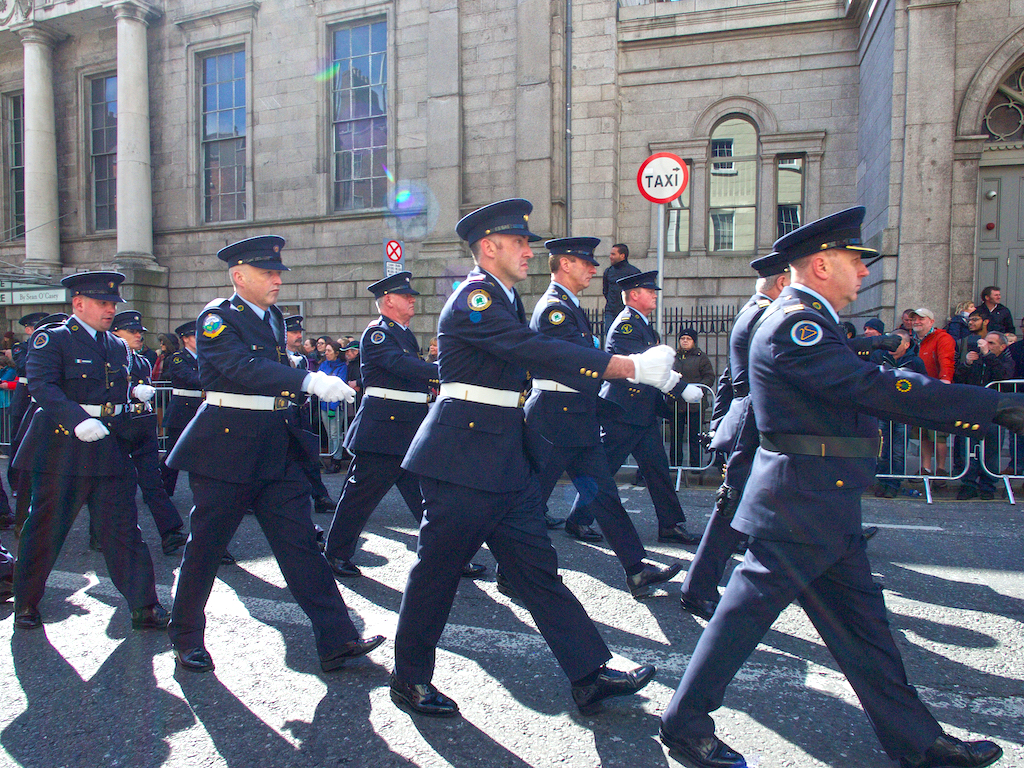 “I felt very proud to march through the center of Dublin with my colleagues as a mark of respect for all those people, young and old, men, women and children, who gave up their lives during Easter week 1916 so Ireland could gain its independence and that a fair and just society with equal opportunity for all could be created,” said Joseph Hillen.

Reflecting the caliber of cultural performances held this week – and throughout this year – was a show entitled “Reflections on Exile – How we are viewed by our American cousins” at the historic Gaiety Theatre in downtown Dublin. It featured diverse speakers and performers, all focusing in word, song and music on the events of Easter 1916.

Skilled guitarist-singer Declan O’Rourke displayed his mastery of harmonies with powerful renditions of the poignant ballad he himself wrote entitled “Children of 1916” and the classic Irish song, “The Foggy Dew.” He was richly supported by Emer O’Grady on cello.

Due to a mistake by national public television broadcaster, RTE, which hosted the show through one of its staff members, Miriam O’Callaghan, talented musician-cum-singer Mick Moloney was made to repeat his lovely rendition of the ballad, “James Connolly,” as the TV station failed to record him properly first time.

Irish-born, Nashville-based singer Maura O’Connell performed well-known ballad, “The Water Is Wide,” unaccompanied, her voice soaring to the rafters. Actor Bosco Hogan read a series of poems relating to 1916 including “I See His Blood Upon The Rose” and “The Mother” by executed rebel leaders, Joseph Mary Plunkett and Padraig Pearse respectively. 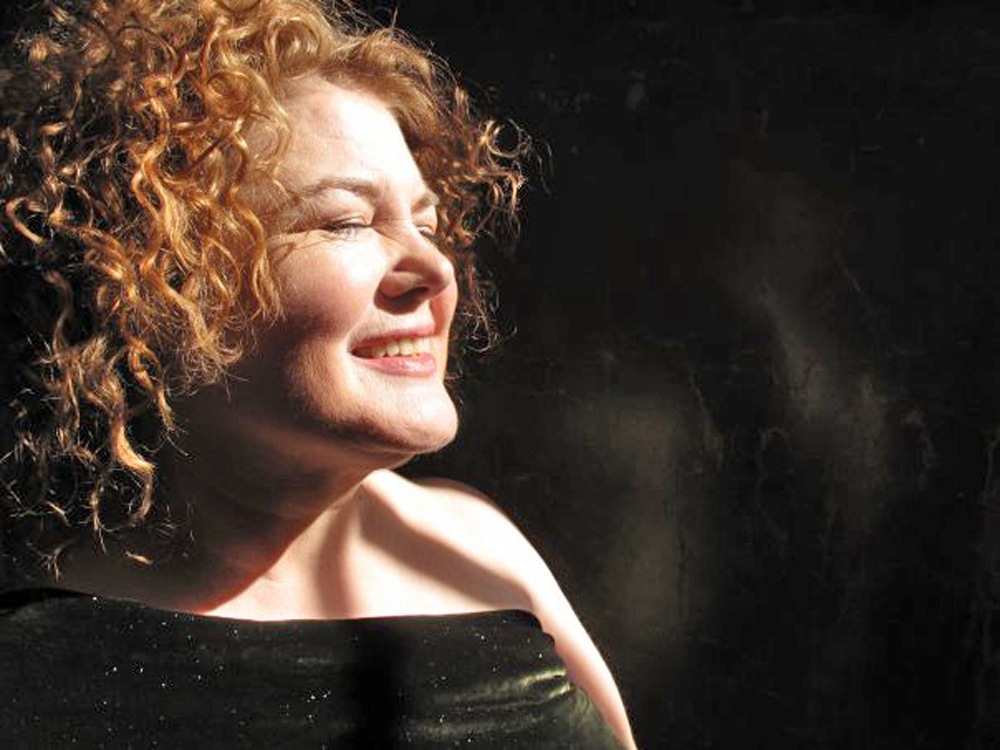 While O’Callaghan’s stilted style of hosting stymied spontaneous discussion, noted New York University historian Joe Lee provided excellent insights into the events of 1916, including what he termed “Pearse’s theatre of the executions” – surrendering, not fighting to the death, knowing executions would inflame Irish passions to achieve Irish independence. Lee described this as “the single decision that transformed Ireland.” Lee also bemoaned the fact that Ireland today is far removed from that envisioned by the revolutionaries who placed emphasis on equal opportunity and religious freedom. Today, the Catholic Church holds a monopoly on Irish education and research shows that the difference between rich and poor is extremely wide, causing leading academics to say “elitism” is engrained in modern Irish society.

Photo used with permission from Altan

Economic disasters that have occurred under the government leadership of political parties such as Fianna Fail, Fine Gael, Labour and the Progressive Democrats since the establishment of the Republic of Ireland caused even well-known traditional singer-musician with the Altan group, Mairead Mooney, to say 1916 leaders would “turn over in their graves” if they were to see what Ireland had become.

Dressed in black and with voice as clear and smooth as glass, Mooney sang the haunting ballad “Roisin Dubh” in her native Ulster Gaeilge. Then, upping the tempo, the five-member Altan band burst into a series of jigs and reels including “The Humours of Wexford” and “The Dark Haired Lass” that had the appreciative audience hand-clapping in no time. Of particular musical beauty was the gentle tune, “The Road Home.” Written by band member, Martin Tourish, on his way back from a music festival in the Irish town of Milltown Malbay, he played both fiddle and tin whistle. On the role music and song play in a nation’s culture, Mooney said, “Historians tell us what happened, songwriters tell us how people felt during those happenings.”

In addition to describing poetry written around 1916 as having a distinctly 19th century flavor, Pulitzer-prize winning poet and Princeton professor, Paul Muldoon, read aloud his own poem about the Rising.
Reflecting the diversity of entertainment, the Rathmines and Rathgar Musical Society performed excerpts from “The Mikado,” a show that was revived and performed at The Gaiety in 1916 due to disruption of rehearsals for “The Gondoliers,” causing its postponement.

Capping off a memorable commemorative evening, young, ginger-haired guitarist-singing talent, Gavin James, performed a trio of songs including “The Auld Triangle,” his voice a reminder of Van Morrison at his best, and “Bitter Pill,” the song that won him the “Choice Music Irish Song of the Year Award” last year.

All in all, The Gaiety Theatre and the performers provided a fitting tribute to the memories of the brave men, women and children who gave up their lives for Irish freedom exactly one hundred years ago.