As peace fell like a comfy blanket over northern Ireland following 30-plus years of street violence, visionary thinkers decided a special venue was necessary to harness latent creative juices – thus was born The MAC in downtown Belfast, a home for artistic talent of all kinds.

Over the last week, two particular events reflected the impressive path The MAC has taken during its short, three-year lifetime.

‘A Nation’s Theatre’ event was a partnership between it, London’s Battersea Arts Centre, The Guardian, a leading British newspaper, and Belfast’s Replay Theatre Company. As described by Olivia Ivens, the arts center’s press officer, “It is a unique part-season, part-campaign and part-debate series, with the aim of shining a light on the breadth and depth of theatre across the UK and bringing together theatre-makers and theatre-lovers in discussions.”

She added, “Performances from more than 30 theatres and theatre companies from across the country have taken place and will continue to be presented in Battersea Arts Centre’s spaces. A series of curated public debates have addressed theatre, arts, politics and statehood, as well as the development of new national theatre models that might positively impact society and community. Provocations have been raised and ideas explored, such as the opportunity for the inverse live streaming of theatrical events from outside London onto screens in the capital. The Guardian is also exploring the many themes raised by A Nation’s Theatre in a rich and diverse array of editorial, including the latest piece by Anna Newell of Replay Theatre Belfast.

Our evening at The MAC began with participants being escorted to a small room on an upper floor with a classroom-like atmosphere. As people chatted idly to each other, a side door quietly opened and a nondescript young man in sneakers, jeans and a hoodie top stepped in. Such was his soft entrance, hardly anyone took notice – until he started speaking. Within minutes, the audience was mesmerized. For the man, Shaun Blaney, is a talented actor with the Replay Theatre Company and he proceeded to dramatize an enlightening and inspiring story focusing on a character called Comet, written by John McCann. The standing ovation Blaney received was well deserved.

Participants then faced a tough challenge – to choose one of three artists to sit with to discuss their work and theater in general. The three people were Niall Rea, artistic director of Theatreofpluck, Northern Ireland’s first publicly funded gay theater, who’s latest production of ‘Troubles’ pushed the boundaries between theater and other media, incorporating dance and live performance with video and audio recordings of a verbatim script created by Shannon Sickels Yee, to immerse audiences in the histories and experiences of 46 people growing up queer amidst the conflict of northern Ireland; Anna Newell, artistic director of the Replay Theatre Company, which makes shows for babies, including one entitled ‘Tiny’, with the youngest audience member so far being four days old and is currently touring a show for children and young people with profound and multiple learning difficulties where both the audience and the cast are in water in a hydrapool; as well as Sickels Yee, playwright and producer. 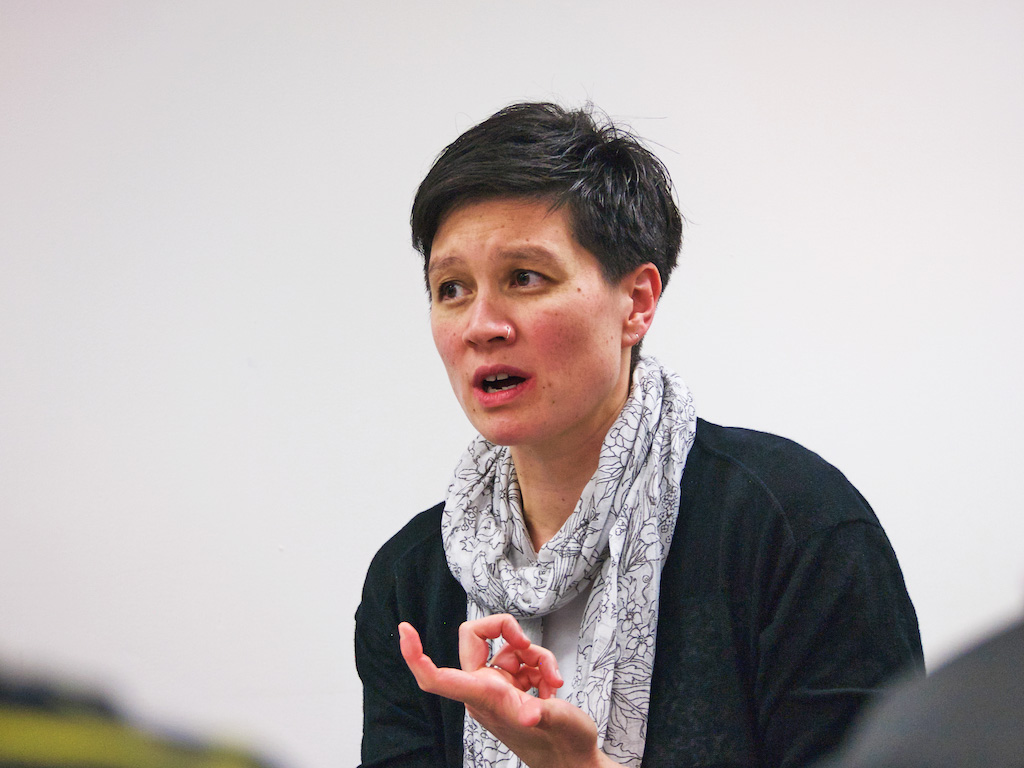 We chose Sickel, who talked about her work entitled ‘Reassembled, Slightly Askew,’ one of several participants could experience throughout the day. This production is an autobiographical, audio-based artwork about the American woman’s experience of falling critically ill with a rare brain infection and her journey of rehabilitation with an acquired brain injury. So innovative is the show, audience members listen to the audio via headphones while lying on a hospital bed, with technology making the sound three-dimensional, causing listeners to feel they are inside Shannon’s head, viscerally experiencing her descent into coma, brain surgeries, early days in the hospital and re-integration into the world with a hidden disability.

Asked whether she had designed the production for therapeutic or artistic purposes, Shannon said, “Definitely the latter.”

Participants were then ushered to a third room in The MAC where they were treated to a fine dinner while intermingling with each other and continuing their discussions on the future of theatrical performance. Overall, a most enjoyable and stimulating evening.

On a lighter note was the one-man show, ‘The Accidental Pervert.’

Beginning its life as a sketch in the US performed by comedian Andrew Goffman, it was brought to The MAC on the initiative of James Huish. Singer and founder of the Belfast School of Performing Arts, Huish had enjoyed the show off-Broadway in New York and decided a local actor he works with, Owen McCavana, would be just right for the one-man part. He wasn’t wrong. McCavana, who had 10 days to master the 98-minute, 43-page script, skillfully – and exhaustively – enacts the role of a young boy as he awakens to the delightful joys of sex. This rite de passage multi-media show is both witty and true-to-life, with McCavana moving sprightly around the stage mainly in vest and underpants in comical fashion, even managing to interact with his audience on an amusing ‘pencils and pins’ scene.

Huish, the producer who is also the voice of Darth Vader in a scene, has created a credible stage set reflecting the actor’s home, featuring a four-poster bed, a clothes hanger, an armchair and TV, a set of golf-clubs and a kitchen table. Humorously as the young boy avidly watches, and re-watches his father’s 96 pornographic videos, which he finds in a Pandora-like box, angelic, monastic-like music emanates from the speakers, indicating the young boy’s sudden, religious-like revelations. A large screen behind the actor showcases the screwball titles of some of the videos, including ‘For Your Thighs Only, ‘Full Metal Jackoff’ and ‘Sperminator.’

Rather than relying on simple, one-line, sex-linked jokes, ‘The Accidental Pervert’ charts the young boy’s developing sexual maturity including his fantasies over the house-cleaner, his first girlfriend, his loss of virginity, his falling in love and how these various experiences affect his outlook on life.