Belfast’s Lyric Theatre showed over the last week just why it is such a leading performance venue, hosting two contrasting shows – ‘Christmas Eve Can Kill You’ and ‘Fast & Loose’ – each, in turn, revealing the rich seam of acting, directing and writing talent in northern Ireland today.

An ample illustration of this burgeoning artistic community is ‘Accidental Theatre,’ which describes itself intriguingly as, ‘a collision of perspectives, art forms and unusual collaborations – curious stories told through vibrant, ambitious performances,’ adding, ‘Accidental walks the tightrope between the unexpected and the impossible, exploring the intersection between British narrative and European aesthetic styles of theatre.’ 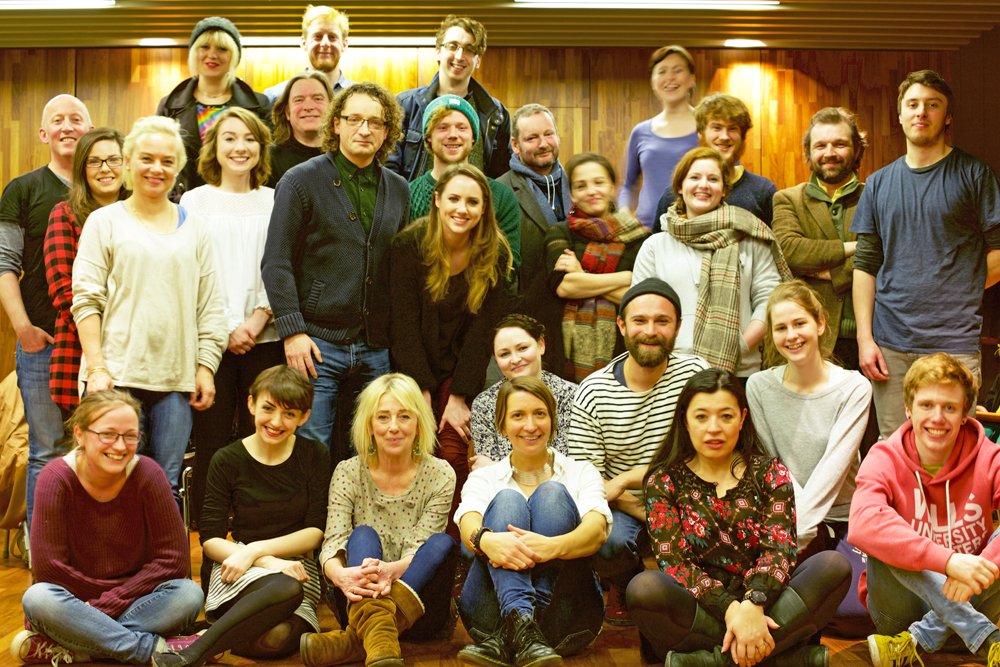 Like any small theatrical company, Accidental’s staff must spend much of their creative energies on fund-raising to keep their collective head above water, a situation made more difficult in this era of severe government cutbacks. That’s why it has to be admired even more for the performance platter it presented to a capacity audience on Saturday, the best theatrical five-pound value ever, the cost of a pint of local ale.

Now in its 9th year, ‘Fast & Loose – Theatre for the Chronically Impatient,’ consisted of four short plays that traversed the emotional spectrum, from comedy to pathos, from tragedy to heart-warming sentiment, culminating in a ‘make-you-laugh, make-you-cry’ kind of evening.

The context of how these plays emerged is even more impressive. At 9 pm last Friday evening, four writers were each given a suitcase, inside which were diverse objects and a song. These provided the guidelines for the plays they had to write – overnight. Twelve hours later, Saturday 9 am, four directors, each with a small team of actors, arrived at the Lyric to start rehearsals on the freshly-baked scripts, show time being twelve hours later, 9 pm that same evening.

Having been a broadcast and print journalist and editor for more than 30 years, I’m a teeny-weeny bit familiar with deadlines, but nothing like this. My hat is off to all concerned. 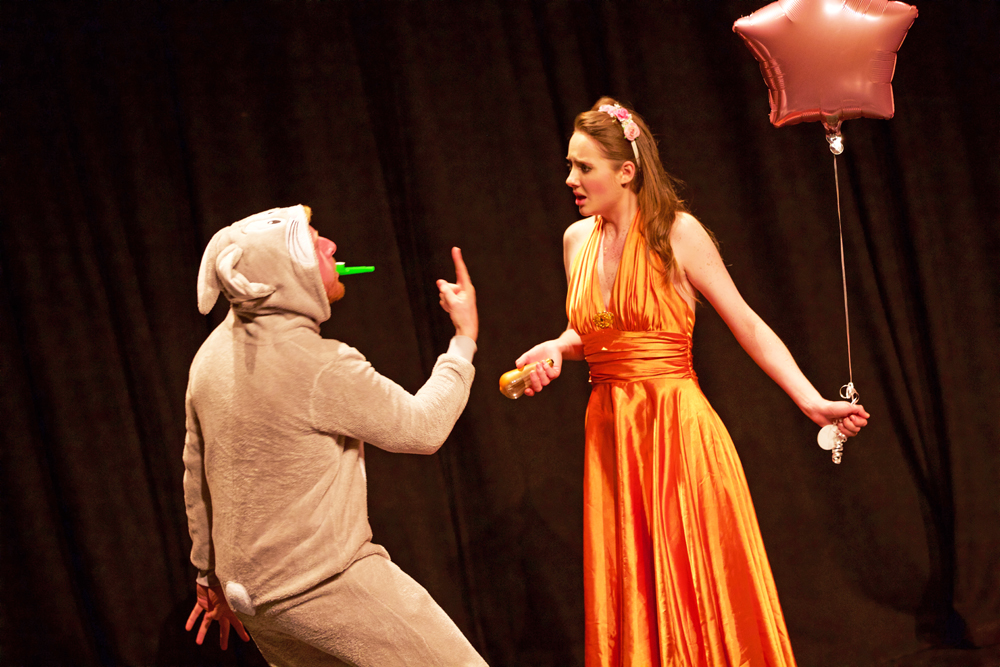 Emily DeDakis, Accidental’s dramaturg and producer, a transplanted American who starred in last year’s ‘Belfast Book Festival’ with a powerful argument for ‘prose over poetry’ as a literary genre, summed up the feelings of her theatrical colleagues, artistic director, Richard Lavery, and outreach co-ordinator, Teresa Hill. “The 9th annual ‘Fast & Loose’ lived up to its tradition – delighting a sell-out audience with four tiny but uniquely bold experiments in theatre,” she said. “Not even our team of twenty-five theatre artists can quite believe what was possible when we set them loose in the Lyric for a single day. ‘Accidental’ were blown away this time – not just by the energy and ingenuity of this year’s company (we’re used to that by now) but by the generosity of more than thirty crowd funders who backed the project. This year’s ‘Fast & Loose’ was challenging and emotional in totally new ways; it really made us respect the risk our artists take, and the importance of embracing that perilous unpredictability.”

While limitation of space does not permit me to review each play individually, each deserves mention. 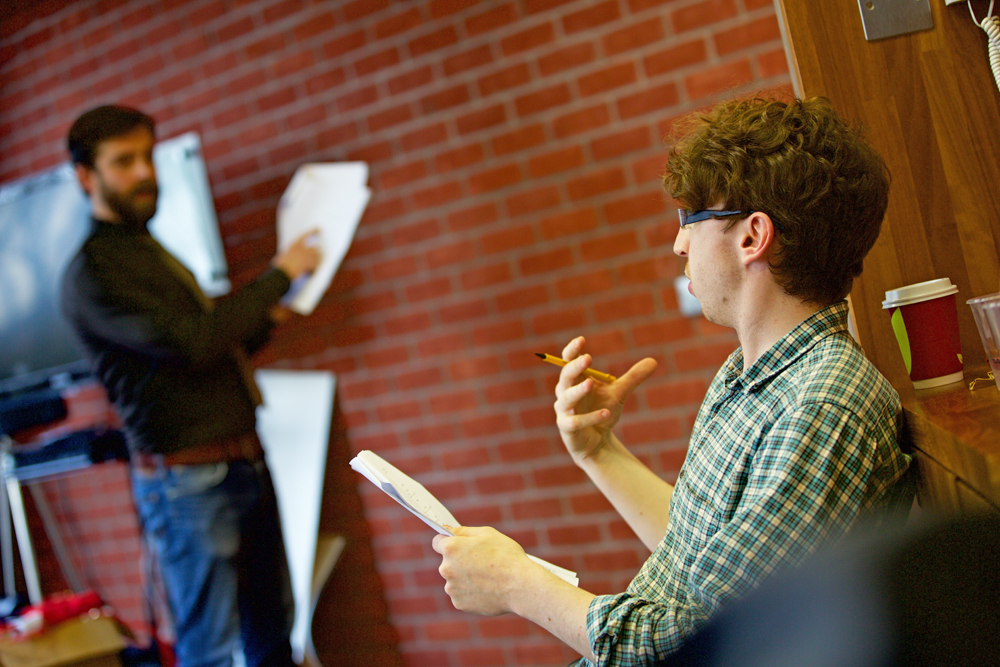 Mary-Frances Doherty, writing her first multi-character theatre script, penned the lively, comedic, ‘Simple Easy Things That Will Make You the Next Millionaire,’ with a pink tutu; the CD ‘Teach Yourself Thai, Vol. 3;’ a tennis ball wearing a sunhat and the song, ‘Für Alina’ by Arvo Pärt, as her guidelines. Director: Rhiann Jeffrey.

Jimmy Kerr wrote ‘No Place Like Home,’ using a banana with hieroglyphics written on it, a marigold glove with tattered fingers; a piece of sea glass and the song, ‘Maybe’ by The Ink Spots. Director: Miche Doherty.

Vittoria Cafolla wrote ‘The Safety Pin’ using a bottle cap with Ursa Major on it; a string of safety pins labeled ‘Exhibit 22: Anthropology’; a pineapple and the song ‘A Number of Microphones’ by Propellerheads. Director: Oisin Kearney.

Katie Richardson, with her first multi-character theatre script, wrote ‘Flash Mob Dance Party,’ a reflective ballad of a story bridging words and body movement, using a kazoo, a sign that read ’Sorry: Temporarily Out of Stock;’ a light bulb with a splash of orange paint and a sketch of a squirrel pasted on it and the song ‘A Beard of Stars’ by T. Rex. Director: Nicholas Boyle.

‘Accidental Theatre’ is hoping to celebrate the 10th birthday of ‘Fast & Loose’ next year by developing it into a multi-city project with rapid-playmaking workshops in schools.

Complementing ‘Fast & Loose,’ the Lyric is also hosting its traditional Christmas production, which runs until January 10. Written by Marie Jones, who also wrote last year’s ‘Mistletoe and Crime,’ this year’s selection, ‘Christmas Eve Can Kill You,’ follows the experiences of Mackers, a taxi driver, as he criss-crosses Belfast. Set in 1992, before the Peace Agreement that ended the so-called ‘Troubles,’ the play features colorful characters in a series of sketches, some of which reflect universal themes.

Among those enlivening the cab driver’s evening are a cheating husband and his angst-ridden mistress, a mother abandoned by her grown-up children, an upper-class English actor who arrives at the local airport to play a paramilitary leader in a TV production, a squabbling family, tongues sharpened by booze, a man, with a turkey under his arm, in no particular hurry to go home to his long-suffering wife and a British soldier who implores Mackers to bring him a bottle of poitín (Irish moonshine) to ease the pain of being away from his girlfriend, the love of his life, who turns out to be not quite so.

Mackers is played effectively by Tim Loane, who co-founded Tinderbox Theatre Company and first appeared in this role in the original production twenty years ago. As the straight man he allows the six other actors, playing almost twenty characters, to strut their stuff, satellite-like around him – in a delightfully whacky fashion, including scene-stealing Sonny the dog who woos the audience by licking actress Tara Lynn O’Neill’s face, then yawning mightily.

Dan Gordon is not only the show’s director but also deserves kudos for his depiction of several entertaining characters, including the jaunty turkey-carrying husband. Paul Keoghan produces a minimalist set and lighting design comprising a taxi, a doorway and a set of traffic lights, enough to frame the sundry on-stage incidents.

While there are no awe-inspiring, philosophical lines to savor, ‘Christmas Eve Can Kill You’ offers generous slices of seasonal good cheer and insightful glimpses into Belfast life with its inimitable brand of humor.