Under a clear blue sky with the sun glinting off its sparkling fountains and sandstone facade, the Corinthia Palace Hotel & Spa in Malta looked positively regal.

Most appropriate considering the official residence of the nation’s President, Marie-Louise Coleiro Preca, is literally across the street and the leafy San Anton Gardens nearby.

Add to this an upscale neighborhood amid the three villages of Attard, Balzan and Lija and the hotel’s rich and many balconied rooms and you have a most attractive, relaxing ambiance right in the heart of this historic Mediterranean island nation.

Managed by Englishman David Woodward, who worked at the Dorchester, this 156-room, 5-star hotel is the original flagship of the Corinthia Hotels group launched by the Pisani family and now operating in several countries. Bought in 1959 by Paul Pisani, whose business empire included an important flourmill and the island’s only match factory, it was first and foremost home for himself, his wife and their six children.

The residence was eventually put to greater use, as the entrepreneurial Pisani family transformed it into a successful wedding venue, then a restaurant in 1962, naming it after the Corinthian architecture of the ornate columns that surround the dining room opened in 1962. The hotel itself was officially opened six years later.

This Italianate-style villa emanates a sedate atmosphere, a verdant oasis in a suburban setting, its spacious rooms presenting views into the colorful gardens and over the surrounding neighborhood. Furnishings are sparse, with simple artwork including pen drawings of an old Valetta, the capital city.

Under the guidance of executive chef, Stefan Hogan the hotel embraces a diverse selection of dining options. Rickshaw, a Far Eastern restaurant, offers evening cuisine from Thailand, Japan, Singapore, China and beyond.

Fortunate enough to be staying at the hotel when its menu brunch was officially introduced, we were treated to a delicious array of dishes such as duck-filled dumplings and duck cooked in beer sauce, Thai prawn soup, mutton in coconut curry, sweet and sour chicken, pork in soya sauce and grouper fish in a mild curry. Refreshing drinks include specialized Chinese beers, as well as Japanese sakes. A spacious lounge above the restaurant entices one for pre or post-dinner drinks with soft lighting and deep, plush armchairs.

Timeless and tranquil, the Villa Corinthia Restaurant is a high-ceilinged, elegant space with murals by Maltese artist Raymond Pitre decorating its walls.

Here sophisticated starters included warm salad with dried fig chutney from a local artisan on the island of Gozo, seared pigeon breast on a bed of baby spinach, with dainty helpings of smoked tomato puree and dukkah, an Egyptian spice blend of toasted nuts and seeds, as well as yellow beetroot tarte tatin with soft sheep cheese from Gozo and roasted pistachio and lemon oil, decorated with grapefruit slices and small beads of balsamic vinaigrette.

Being a Mediterranean island, no other main could be more suitable than fresh sea bream, baked lovingly in a salt and herbs crust to maintain its soft texture, then drizzled with Maltese olive oil and lemon jus for added subtle flavor.

With head pastry chef, Mark McBride, at the helm, a dessert of soft polenta and olive oil cake with Ta’ Mena artisanal honey ice cream and bee pollen was an culinary echo of Malta itself – tantalizingly diverse and exotic. 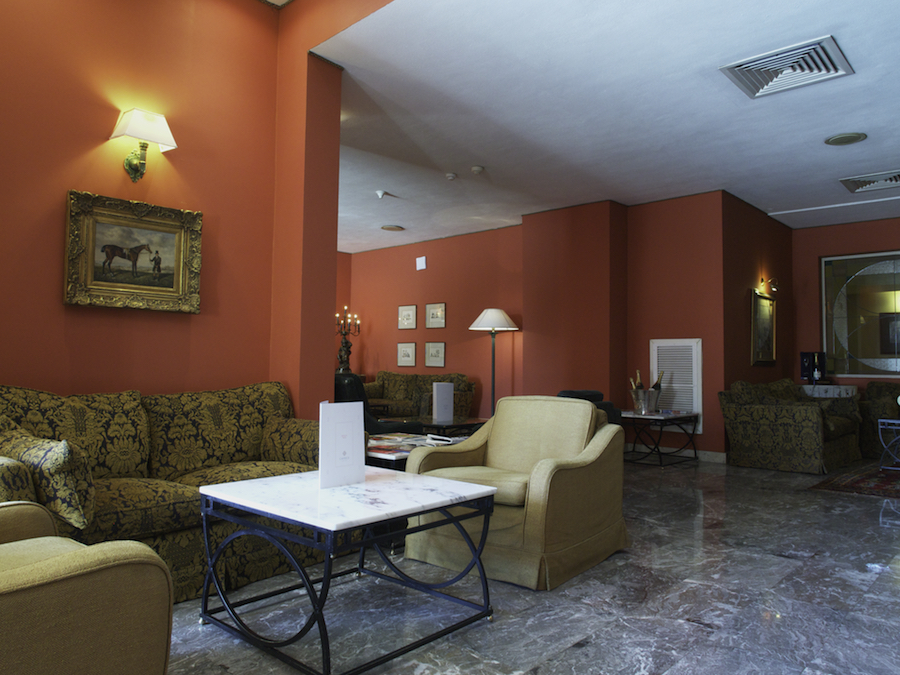 For an added touch of grandeur, a quintessentially British afternoon tea is served in the restaurant every Sunday.

Tucked away from the hotel’s bustling lobby, the Orange Grove is an informal meeting place where afternoon tea is served every day. Another relaxing alternative is the Caprice Lounge, with the soothing sounds of light entertainment and an impressive selection of whiskeys, brandies and cocktails to help one unwind after a busy day. The lounge leads to the Caprice Wine Garden, a tranquil open-air space where guests enjoy the peaceful ambiance of the gardens while sipping a fine vintage. Also set within the gardens and overlooking the pool, the ‘Summer Kitchen’ is the latest addition to the Corinthia Palace portfolio of restaurants.

A secluded outdoor one bordered by palm trees and hedge rows, an indoor hydrotherapy pool, a Jacuzzi and sauna beside an outdoor patio, as well as tennis and squash courts provide diverse activities. Daily gym classes include Zumba, pilates, yoga, kick-boxing, barre and aerobics while the Athenaeum Spa offers an array of revitalizing treatments including its special ‘Silhouette’ for slimming and ‘Eclat Countour’ for wrinkles and puffy eyes. For something different, try the candle massage, with soft aromatic wax made in Gozo instead of standard oils.

For pet lovers, there’s the hotel’s innovative ‘Palace Pups’ program by which pooches of all kinds are treated with complimentary bowls, treats and toys and even doggie room service, massages and grooming. Dogs can also join their owners for lunch at the ‘Orange Grove’ restaurant. The hotel makes a donation to a dog home for every dog visitor it has.

Outside Corinthia Palace lies a world rich in history and architecture. Comprising seven Mediterranean islands, the Maltese archipelago boasts a rich tapestry of archaeological and cultural treasures for guests to explore, with some of the oldest prehistoric structures in the world, dating from 3,600 BC and a legacy that includes the Sicilians, Phoenicians, Romans and, more recently, the British.

Fortunately, the Corinthia Palace Hotel & Spa is located between the island’s capital, Valletta, and Mdina, the picturesque medieval-walled city that is still inhabited to this day. The hotel also provides a complimentary shuttle bus to the city center, available three times daily, making travel to downtown Valletta relatively easy.

For a property that boasts elegant architecture and complex cuisine using local products at a convenient distance from the downtown capital, the Corinthia Palace is a fine choice.