From broad executive room balconies of the Corinthia St. George’s Bay Hotel the sandstone-colored walls of Malta’s historic medieval buildings stand clear across the inlet as boats meander back and forth penciling lazy lines of surf on the Mediterranean Sea.

In terms of location, therefore, the 5-star, 249 room-hotel – one of ten Corinthia hotels in the group – could not be more strategically situated. On the edge of the town of St Julians, it not only presents such wonderful panoramic views but is also just three kilometers from modern Sliema, with its promenade and open-air cafes, souvenir stores and restaurants, and eight kilometers from the island’s capital, Valletta. 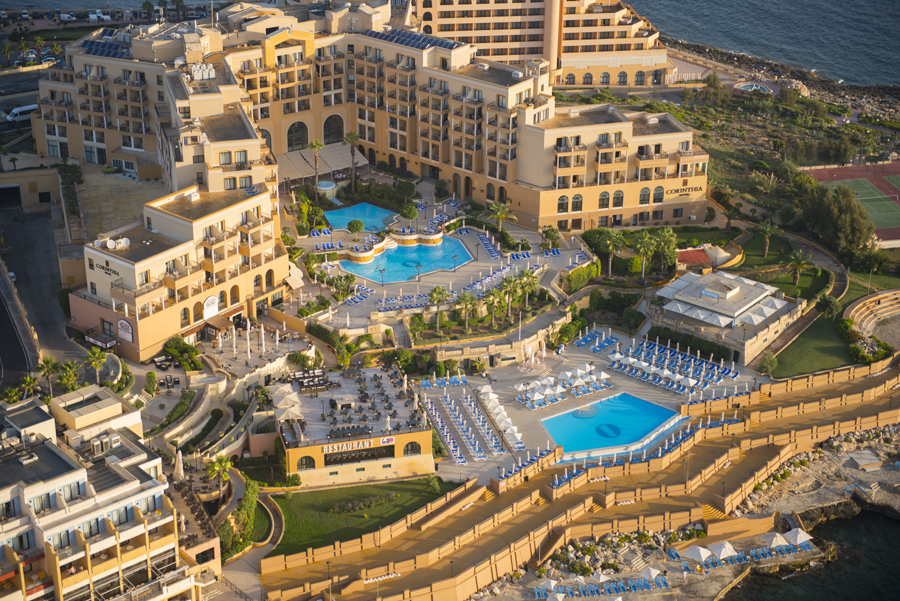 While there is a small sandy public beach at the bottom of the winding road upon which it stands, the hotel, opened 20 years ago, also has its own private Lido and four outdoor swimming pools within its spacious grounds.

The Apollo Spa offers a full menu of treatments ranging from facials to body wraps, the latter including special detox seaweed and chocolate versions. There is also an assortment of massages, from the traditional Thai to hot stone and bamboo. The ‘Absolute Spa Experience’ combines a customized facial with either a relaxing or Thai massage while the ‘Candlelight Caress,’ using warm, aromatic oil from the slow-burning candle, creates both a sensual and relaxing feeling. 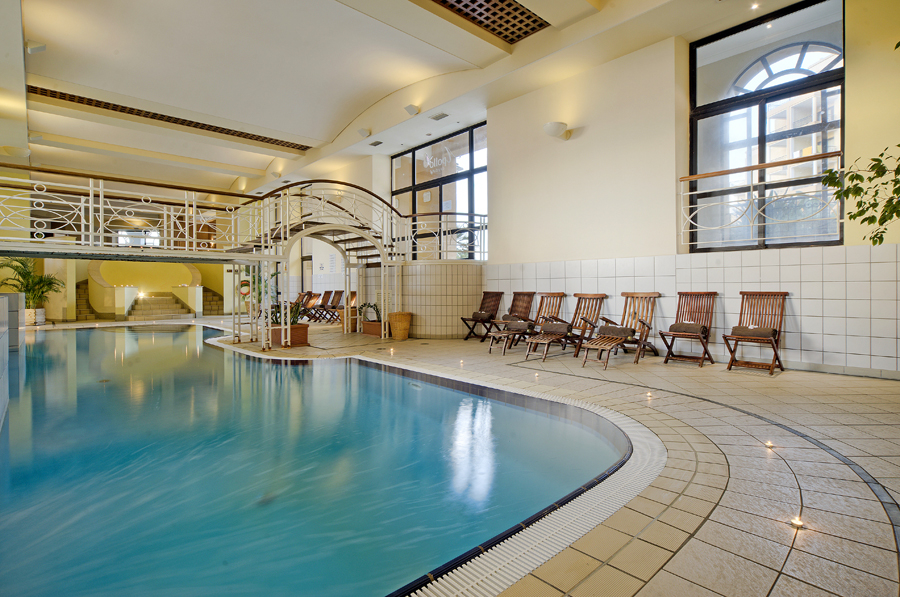 Worth noting is that Malta’s Sean McGahern set a new Guinness World Record for the longest warm water scuba dive (49 hours and 56 minutes beneath the surface) two years ago at the Lido, so every Tuesday in summer the hotel offers a free trial dive in the top pool with the instructor being none other than McGahern himself.

Other water sports include a fully- fledged PADI diving school and the hotel also has an indoor pool, health spa and gymnasium. Matching service with technology, guests can order their drinks and food poolside using a special Twitter account and giving their umbrella number. 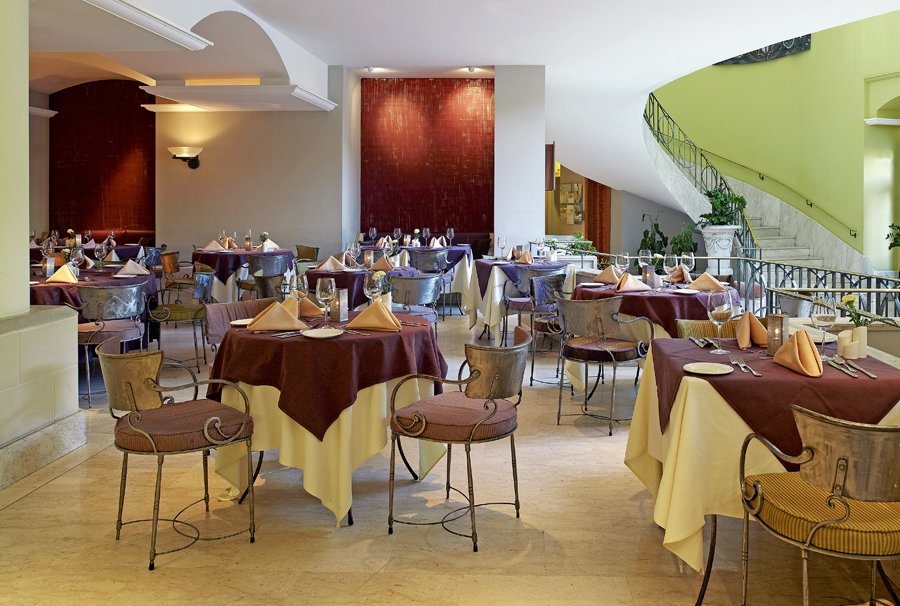 The hotel’s ‘Executive Club’ is an exclusively reserved area with 39 suites and 31 rooms serviced by a separate reception for express check-in service and a private lounge.  Conference facilities at the St. George can accommodate up to 600 people and banqueting facilities up to 1,500.

All rooms have uninterrupted sea views and are contemporary in design, reflecting a simple decor. My thick-carpeted executive suite was spacious, with both the bedroom and living room having access to large open terraces, perfect for sunbathing as well as star-gazing at night. It also featured a walk-in wardrobe and a large bathroom. But the undoubted highlight of the furnishings was a terrific massage chair, to which I became quite addicted during my stay. With so many windows overlooking the sea, the rooms was bathed in plenty of light. 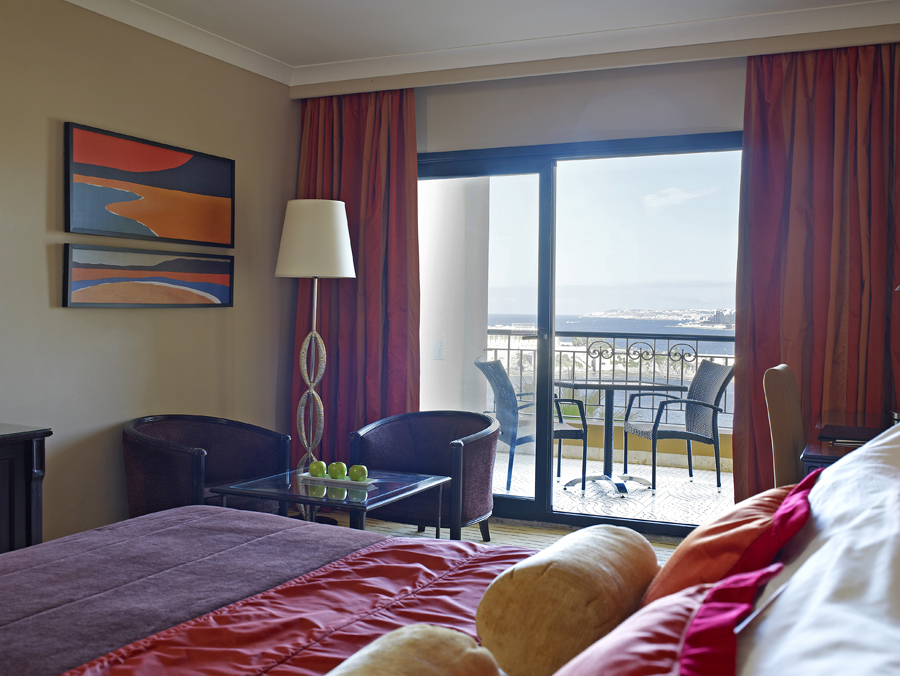 Food options are diverse with several restaurants to choose from including the fine-dining ‘Caviar & Bull,’ run by Chef Marvin Gauci, with large windows granting fine views over the Mediterranean; Henry J. Beans, the all-American bar and grill; the ground-floor Fra Martino Restaurant and Terrace where both breakfasts and dinners are served, either inside or al fresco; the White Olive Restaurant and Lounge beside the main swimming pool with a menu of baguettes, salads, grills and desserts; and the Pearl Lounge serving bar snacks, champagne and cocktails. Guests can also enjoy outlets at the neighboring Marina Hotel Corinthia Beach Resort.

Our dinner at the ‘Caviar & Bull,’ on the grounds of the hotel but separated from the main building, proved to be a most enjoyable affair with food both prepared and served by a young, friendly staff, including the Spanish couple, Laura Ferrer Sans on the floor and head chef Serge Huerga Marin. 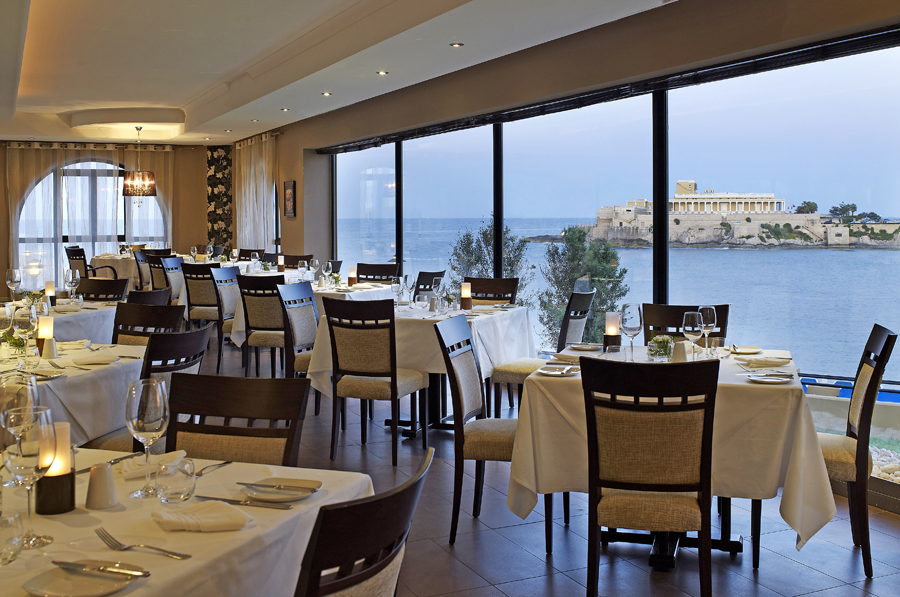 After an amuse bouche of soup and a cracker of foie gras foam, we chose a selection of gourmet tapas as starters including scallops (pan-fried on a bed of lentils, thyme, carrots and peppers), tiger prawns (battered and dressed with Asian vinaigrette and wild herbs), foie gras (served on a thin slice of hazelnut and red currant toast, with balsamic and honey) and black fried calamari (dusted with nero di sepia).

The list of mains would satisfy most sophisticated tastes in both variety and creativity. After selecting the Barbary duck breast – with beetroot and balsamic purèe, caramelized apples in thyme, juniper berry and orange sauce – I can well vouch for chef Marin’s flavor-blending skills. This being the first time I have ever dined on the predator fish, barracuda, I was impressed by its firm texture which, slightly pan-fried with a light lemon and garlic juice, was simply delicious.
As for dessert, the contrasting tastes in a combo of pineapple, pistachio, coconut ice-cream and chili pepper was sumptuous. 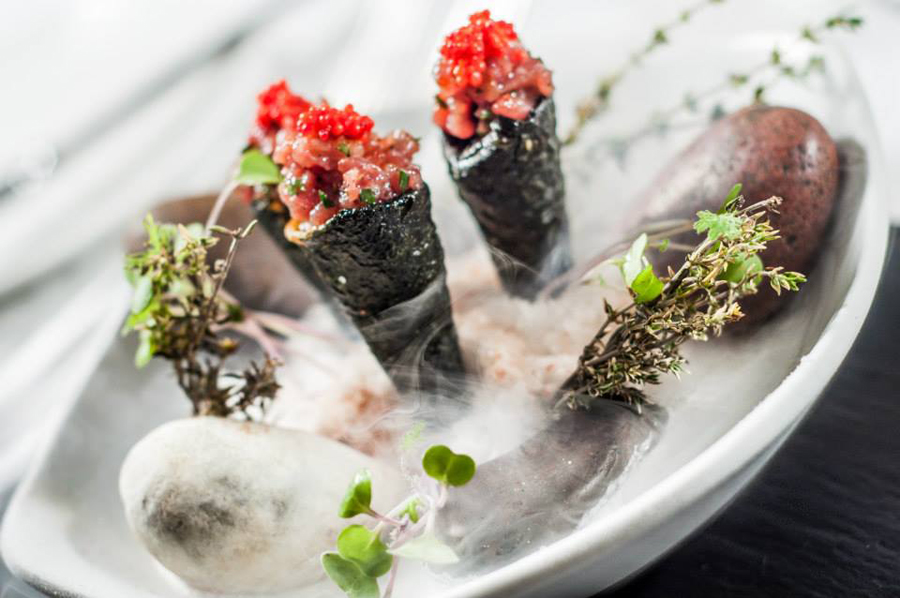 Keenly aware of guests’ needs, the hotel offers an array of special experiences, ranging from swimming with dolphins to dinner-for-two on a private yacht in the Grand Harbour. It also has its own jetty so guests can arrive and leave by boat.

With a 16th century watchtower on its grounds built when the Crusaders (Knights of St. John) ruled the island, the hotel also displays an authentic sense of history. When Napoleon invaded in 1798, officials say this was the first place he landed.

Interestingly, its affable marketing director, Andrew Galea, is a keen amateur historian and can answer most queries. 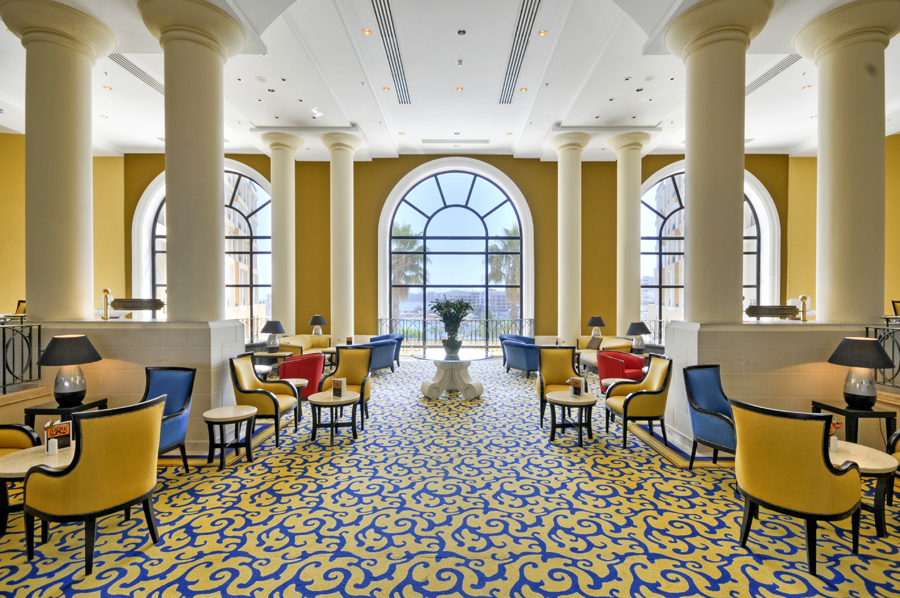 North of Malta’s capital, Valletta, St. Julian’s where the hotel stands, was initially a fishing village, later becoming a summer residence for wealthy locals before developing into one of the island’s most popular resorts filled with lively nightlife. It still, however, retains some of its old buildings and boathouses, though few fishermen remain.

In short, the Corinthia St. George’s Bay Hotel represents the best of worlds in Malta – luxury and tranquility in a secluded location with diverse services yet within easy walking distance of the island’s many clubs, pubs and discos and a short cab ride to the historic center of Valetta.