With a marble bust of Louis XVI displayed proudly outside its ground-floor restaurant and Élysée Palace, home of the French President just up the street, one expects great things of Le Bristol Paris – and one is hardly disappointed.

With so many pleasant ‘bonjours’ from so many staff – the ratio to guests must be exceedingly high. I checked. It is.

Beginnings of Le Bristol could historically be ascribed to Louis XIV, the Sun King, for without him the 188-room hotel might never exist. It was his property development initiatives that led to the Right Bank’s rise in stature with construction of the Grand Cours, now the Champs- Élysées, creating the perfect opportunity for an enterprising hotelier’s dream of hospitality stardom. When he died in 1715 and the power base moved from Versailles to Paris, his successor, Regent, Philippe d’Orleans moved into the Palais-Royal, and dignatories followed, building mansions as they came – one of which became the platform for Le Bristol.
And the rest, as they say, is history.

Since 1925, under the guidance of its founder, Hyppolyte Jammet, and his son, Pierre, Le Bristol, a member of the Leading Hotels in the World, has played host to celebrities of all kinds and colors, from American rock ‘n roll stars to English royalty, from actors such as Charlie Chaplin to George Clooney. Since 1978, under the ownership of Rudolf and Maja Oetker who added it to their ‘Oetker Collection’ of luxurious hotels, it has continued in this familiar role, maintaining its prized position as one of the oldest Palace hotels in the City of Light while gaining contemporary celluloid fame through Woody Allen’s highly-successful ‘Midnight in Paris’ movie. 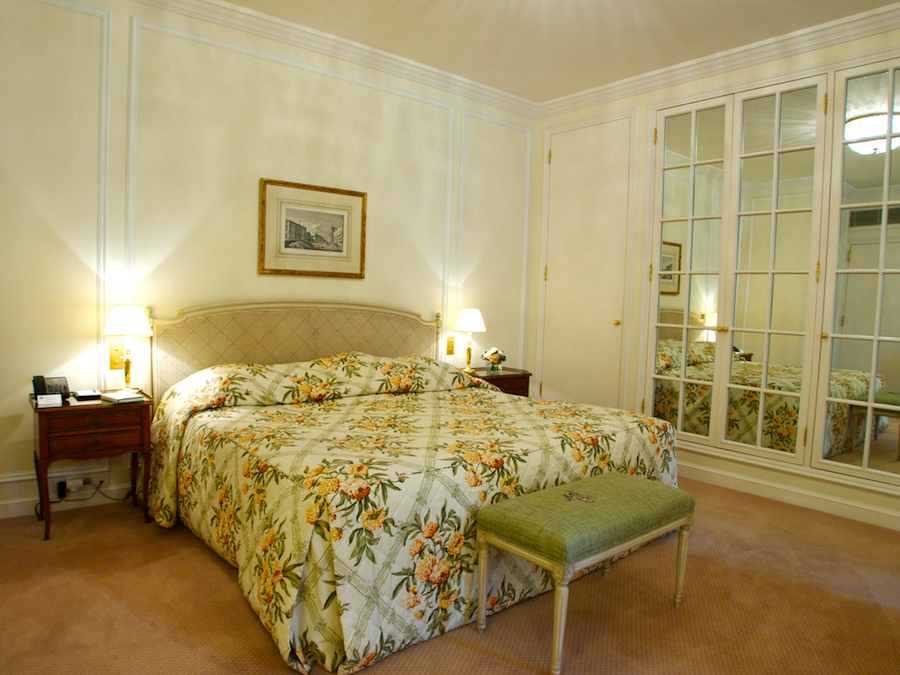 We had a recently renovated junior suite, overlooking a pretty interior garden where breakfasts are served alfresco on warm mornings and discreet, private soirees are also held. Across the lawn, one of the wings is now undergoing radical renovation but you would hardly notice. Our bedroom, with sitting room and bedroom under one roof, was designed in Louis XV and Louis XVI styles, square and spacious with two central pillars and chintz and silk curtains to match the chairs and Persian carpets. As elsewhere in the hotel, a crystal chandelier hung from the ceiling, like an exclamation mark at the end of a sentence.

A vintage-style cane-backed bed, mirrored dressing-room doors, a varnished teak vanity table, console and a bureau, a satellite flat screen TV and a lime green sofa and armchairs comprised most of the furnishings. The bathroom was Carrara marble with La Prairie products.

Breakfast in the Epicure Restaurant was a delight, especially in the company of head waiter, Olivier, who worked in the Europa Hotel in Belfast, once considered the most bombed hotel in Europe. Maybe in part because of that experience his earthy, deadpan humor was most uplifting. 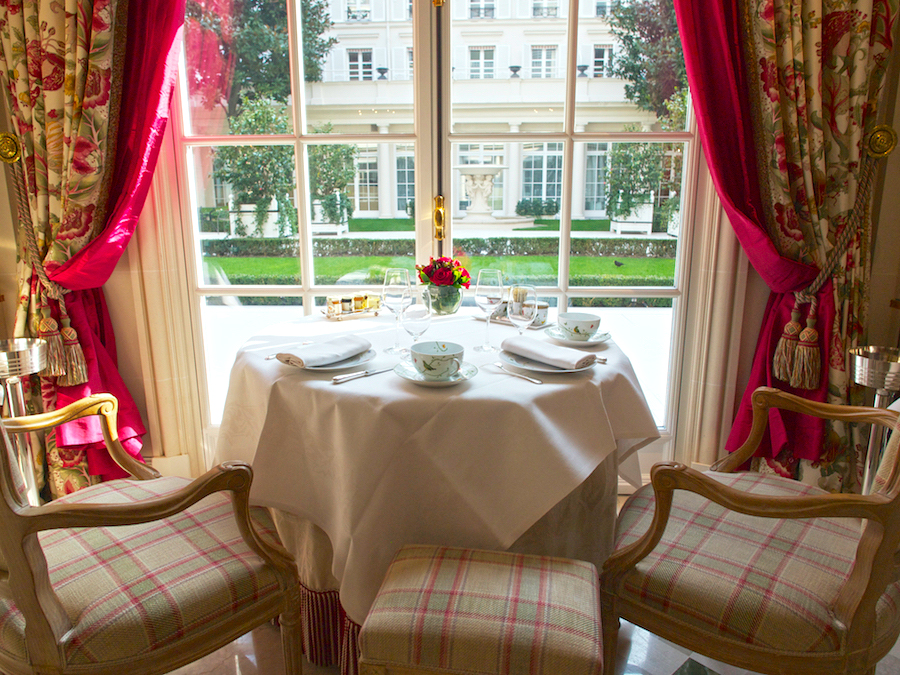 Aside from that was the sheer elegance of the surroundings: magenta curtains, revival furniture, great food served on delicate, flower-designed Raynaud Limoges, chandeliers (again), exquisite coffee that even George C. would give his shoes (and socks) away for – Malango and Blue Mountain brands (the hot chocolate was Vahrona). As for the food, highlights included eggs Benedict with black truffles or hen soft-boiled egg with maple syrup and caviar. Or for those with a very sweet tooth, decadent pain perdue with red berries and vanilla custard.

Having paid big bucks to stay at this famed 112 Faubourg address, one should indulge at one of its dining venues. We did, at its single-star Michelin brasserie ‘114 Faubourg’ opened in 2009. And loved it. Located on the ground floor off the main foyer, it features a decorative leitmotif of vibrant, multi-colored dahlia flowers splashed across its orange walls, as well as sandy-colored pillars, with a decorative black and gold wrought-iron and marble balustrade linking its two levels.

With an open plan kitchen, under the direction of chef Jean-Charles Cauquil, artichoke soup kicked off our fanfare of culinary delight, a delicate blend of truffles, and slices of artichoke and foie gras. As for the king crab eggs starter – suffice it to say, creating beads of ‘lime caviar’ was the work of genius.

It being too early for heavy meat, I opted for what I considered the healthiest item on the menu (aside from vegetarian dishes, but I lack that kind of discipline) – sole cooked classic meunière style, with a delicate, buttery sauce on the side.

My companion displayed much more daring, opting for beef tartare. Daring! More like heroism, considering that several months before she had come down with a severe case of food poisoning from the very same dish at a restaurant in the French capital, that will remain unnamed, necessitating the speedy arrival of a most pleasant young doctor in the early hours to our hotel room.

At ‘114,’ aforesaid beef tartare was sandwiched with shredded parchments of Atlantic oyster. Soft, solid and moist, it elicited child-like murmurs of delight from my brave co-diner (and deep sighs of relief from me).

Other dining options within Le Bristol include the 3-Michelin star Epicure restaurant, which overlooks the interior gardens and Le Jardin Français, for traditional afternoon teas, lunches and dinners. Beside it, Le Bar du Bristol offers a quiet, cozy setting for informal drinks.

A quaint aspect of Le Bristol is its wood-floored interior swimming pool on the 6th level. While not overly large, it has an attractive design. Shaped like a boat, it features colorful paintings of people on beach vacations along the walls. Through its many large windows are panoramic views along the rooftops of Paris to the Sacré-Cœur. It also has a rooftop sundeck. A Spa by La Prairie, a hammam and a fitness center complete the wellness facilities.

For sheer elegance and an authentic sense of Parisian history Le Bristol ticks all the boxes, and its location on rue du Faubourg Saint-Honoré, a mecca for luxury goods in the heart of the city’s arts and fashion district, means it is convenient to many of the top attractions with both Place Vendôme and the Champs Elysee within a short, five-minute walk.