No better time to see Bob Paisley’s wonderful stage depiction of the charismatic former US president in the one-man production, ‘Bill Clinton Hercules,’ than this week as Hillary officially tosses her hat in the campaign ring.

So if you happen to be in Northern Ireland, pop along to either The Courtyard Theatre in the northeast coastal town of Newtownabbey this Wednesday, the Metropolitan Arts Centre (MAC) Theatre in central Belfast on either Thursday or Friday or the Island Arts Centre in Lisburn on Saturday, and enjoy an excellent show. 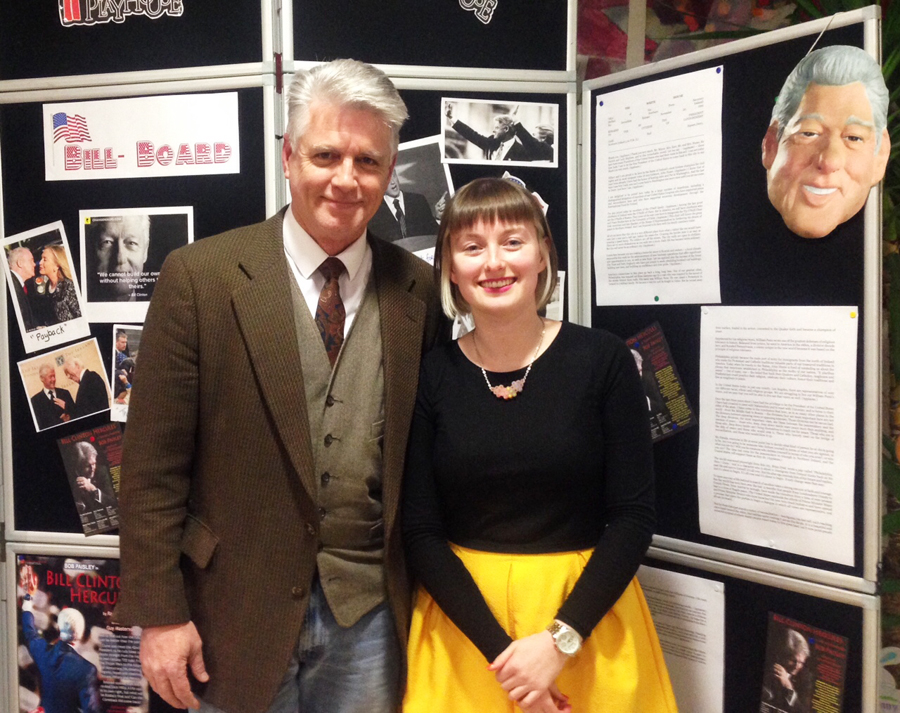 An experienced, multi-talented actor, director and theatre manager, Paisley, who co-founded the Metropolitan Ensemble Theatre in Kansas City, played the two-term Democratic president to a tee at this weekend’s performance at The Playhouse in downtown Derry, northern Ireland. In fact, at one point as he spoke of encouraging his wife to launch a third political party, Paisley’s physical and vocal resemblance to the former White House president was so exact, I found myself bemused that the real Clinton may have actually done so.

To create such a transformation of someone’s rational thinking processes through manipulation of the senses in this way is indeed a hallmark of gilded acting.

Directed by Olivier winner Guy Masterson with Theatre Tours International Ltd., an old friend of Paisley’s who also co-wrote the play with Harvard-trained lawyer-cum-playwright, Rachel Mariner, who was on Clinton’s defense team during the Paula Jones scandal, the 85-minute, single-act production spans Clinton’s childhood in Arkansas to his eight years as exclusive resident of 1600 Pennsylvania Avenue. It also encompasses Hillary’s failed campaign for the Democratic presidential nomination seven years ago, the Occupy Wall Street protests, Syria and the continuing partisan fumbling of politicians inside the Washington Beltway now.

As multiple tomes have been written about the Clinton White House years, the writer-performer-director triumvirate of artists deserve strong praise for managing to include most of the highlights of that period in such a short timeframe and in a highly-captivating manner peppered with humor, poignancy and a wealth of political insight.

Dressed in a smart, dark suit and vivid red tie, an American flag lapel pin firmly in place, Paisley stepped on to the bare stage with aplomb, his eyes beaming that confident, suggestive smile so reflective of Clinton’s charismatic persona. From the former president’s early days in his hometown of Hope growing up mainly under the strict, watchful eye of his grandmother, Edith Cassidy, to his precise chess-moves in the international diplomatic arena during delicate negotiations that delivered peace to war-torn regions such as Northern Ireland, former Yugoslavia and the Middle East, Paisley barely faltered in his presentation, the only occasion being when someone three rows back let a mobile phone ring loudly, then didn’t have the wherewithal to turn it off.

While the play contains many facts about the Clinton presidential years and the issues he faced – albeit some filtered through the lens of poetic license – the whole is made more interesting through the interplay of poignancy with humor and the personal nature of the telling.

For example, in speaking about the sensitive Middle East peace negotiations with former Israel Prime Minister Rabin and Palestinian leader Yasser Arafat, chairman of the Palestine Liberation Organization, Paisley talks about how they spent four days on the distribution of airport parking places.

About the president’s ensuing close personal relationship with Rabin and his later assassination, Paisley says sadly, “hero worship guarantees a bullet” and peace ”can be a dim light in the darkness.”

In the midst of complex political maneuverings both at home and abroad, including Clinton’s mammoth budget battle with Republican Newt Gingrich and the ensuing federal shutdown, the not-so-insignificant issue of Monica Lewinsky is not overlooked. While holding eleventh-hour talks in the White House with his long-time political foe, the president is informed that, as all federal workers are temporarily furloughed, there is no decent food to offer his guest except tomatoes stuffed with tuna. In the show, Clinton’s search in the corridors of power for a ‘pepperoni and passion pizza’ leads to much more than he bargained for – in the form of a particularly lively unpaid intern.

Last but not least, why the play’s title – ‘Bill Clinton Hercules’? That’s linked to a book the president values more than most, one Paisley refers to often in the show – Seamus Heaney’s ‘The Cure At Troy.’

But better the former president tells you all about that than I in his own idiosyncratic way.

My Tweets
Join 1,182 other followers

Inside, it’s a chessboard of gleaming marble throughout the ground floor reception area and a mixture of old bare stone walls, cornices and modern decor with mouldings and a floor-to-ceiling bookcase, including a 1925 medical dictionary and collection of works by Ernest Hemingway, Molière and Balzac. Read about our experience in @villasfoch #bordeaux #luxurytravel #bordeauxhotels #travel #france
Inspired by famous muse of #BelleÉpoque era Paris-ballet dancer Cleo de Merode, considered the first celebrity icon and nicknamed ‘pretty little narcissus,’ @lenarcisseblanc Hotel & Spa is a mere five-minute stroll from the Seine at Pont des Invalides and Quai d’Orsay. See full story on our site #luxurytravel #luxuryhotels #parishotels #boutiquehotels #paris
Thank you Claire and Moses at The Workshouse in #dunfanaghy for the tour and the stories about the local history #workshouse #donegal
Very few of these old Irish cottages left now open for visitors and this one is the birthplace of writer Mici McGowan in #Donegal #historicalplace #ireland #irishwriters #history #micímacgabhann
Can you believe these are views from the same place? This is #ireland and more specifically, #northwestireland #donegal where only the experienced #travelers go #landscapephotography #seascapephotography #travel
The Old, the New and the Belfast in between #titanichotel #belfast #titanicmuseumbelfast #travel #northernireland #ireland
Happy #thursday everyone from @titanichotelbelfast suite overlooking #titanicmuseum #belfast #travel #luxurytravel #ireland
Enchanted Colorful Forest in the village of Poenari is easily accessible with a #luxurycar such as #bmwx6 #travel #romania @bmwromania #luxurytravel #woods #nature #villages
Rustic encounter in the #village of Gornovita in #muntenia #villagelife #villages #romanianvillage #travel #countryside #romania @bmwromania
A short stop to admire the famous #artwork of #constantinbrancusi in Targu Jiu and this one is the #infinitecolumn #travel #romania #townsofromania #romanianartist
We are trying to give some support to a group of #volunteers helping #abandoneddogs in Romania, to cover costs of food and shelter for some of them as the winter approaches. Please #donate and pass on https://gofund.me/95cd45e0
A drive on the tops of the Carpathian mountains #skylinedrive #transalpina #romania #drivinginromania #carpathians #carpathianmountains #travel @bmwromania #landscapephotography
Sunday morning market in Novaci, a small town at the bottom of Carpathian mountains, Romania. Traditional grilled #mici mustard and cold #beer #travel #romanianvillages #villagelife #village #markets #sundaymarkets #travel
Head in the clouds. Exploring Transalpina, a mountain route that will have drive at over 2000 m altitude. #transalpina #romania #exploreromania @bmwromania #travel #autumndrive
A stop in the old capital of #Romania, Targoviste to enjoy both the new and the old #historictowns #targoviste #medievalromania #travel #townsofromania #travelinromania @bmwromania
Journey through the ring of Saturn, an immersive experience at Supernova Planetarium inside a saltmine in Romania @planetariu.ro @bmwromania #stargazing #planetarium #saltmines #travel #travelinromania
We loved our experience at the Supernova Planetarium, the largest #planetarium inside a #saltmine in #romania it’s a unique experience to look up at the sky when you are 200m beneath the earth. A great stop on our journey in Romania driving a #bmwx6 #luxurytravel #visitromania #hiddenromania @bmwromania @planetariu.ro
A hidden gem, the amber museum in the village of Colti #buzau explains the fascinating history of this area, rich in the most diverse #amber deposits #travel #romania #luxurytravel #romanianvillages