Even though some say today’s 60 is yesterday’s 40 (what complex numerical equation they use to work this out is way beyond my simple mind) still, skin is skin, so looking 40 means taking good care of the body’s largest organ.

So, guess what? Reaching yesterday’s 40 (it does sound better than saying 60) this year, I had a quick look-around to ascertain what imaginative products are out in the marketplace that could make me much more ‘George Clooneyish’ than I am.

And, having seen a fascinating exhibition at the National Museum of Ireland in Dublin showing how human bodies were preserved in peat bogs for thousands of years (not that I want to live that long, hard to get so many candles on a birthday cake), I was enchanted by an Irish-based company called ‘Ógra,’ named after the Irish word for ‘young’ (óg), whose products are based on the very same substance.

As every good product should have a good story, Ógra’s is that its founder, Bill Kenny, from Tullamore in county Offaly, central Ireland, burned his arm on a kitchen stove while a young whippersnapper, but instead of rushing him to the doctor, his mother rushed him to the nearby bog (the boy probably thought he was in for a hellish punishment) where she wrapped the damaged arm in peat soil. Lo and behold, properties in the peat helped rejuvenate the boy’s burned skin.

Fanciful or not, it is a good story and its underlying nature is supported by scientific analysis. Securing a research grant of 220,000 euro from Enterprise Ireland, a leading government-funded economic group, Ógra partnered with an internationally renowned applied biotechnology centre and performed a full bioactive profiling of the bog and its vegetation.

According to the company’s CEO, Kieran MacSweeney, the research concluded that peat contains strong anti-oxidants in the form of humic and fulvic acids that can combat free radical damage, which is generally recognized as the main cause of premature ageing.

It also found that elements in peat promote collagen production which helps increase cell re-generation and slow down the ageing process. Peat is also astringent, therefore it binds together skin tissues giving it a smoother look and it contains a natural abundance of essential oils, fatty acids and lipoids that can penetrate the skin and re-establish its natural PH balance.

And, finally, as a detoxifier, peat helps remove dead skin cells, toxins and other impurities from skin by stimulating the lymphatic system. 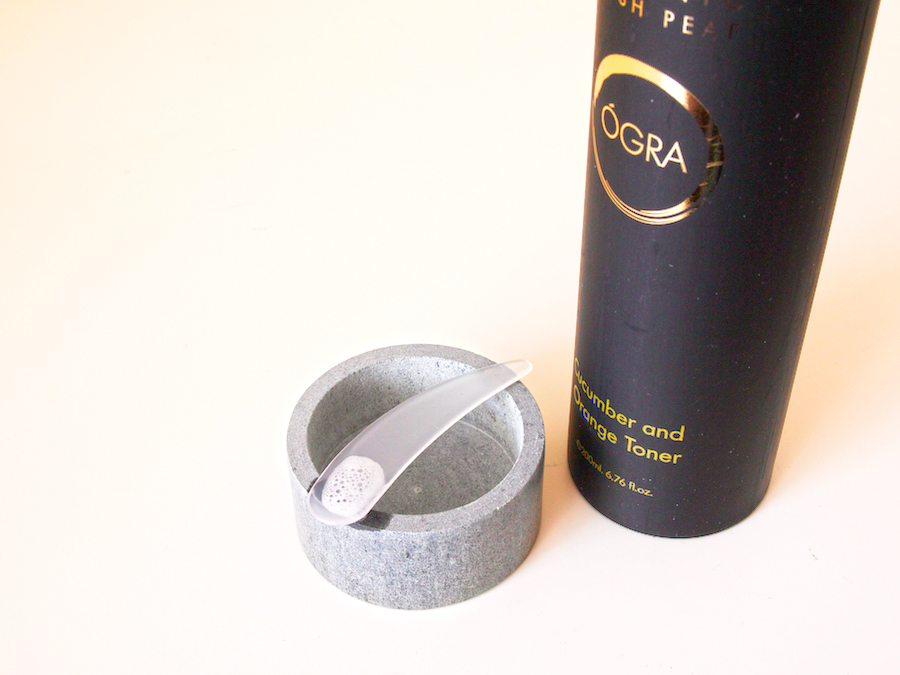 Having analyzed these various properties, ‘Ógra’ have put together a wide variety of products, ranging from eye creams to moisturizers and body masks, all with one simple aim in mind – to return some youthful radiance to tired old skin (which, at my tender age, suits me just fine).

Having obtained a spread of the products, I was immediately impressed by their style of presentation. Not old-fashioned, girly or boring packaging, but hip and modern, and – dare I say it – sleek – a vibrant combo of black and gold coloring on variable-size containers, enough to encourage confidence in the ingredients.

A few comments on individual products –

Peat face and body mask – black in color, light in texture, not oily. Spreads easily on the wet face and is easily washed off with a wet cloth after it dries.

Cucumber and orange toner – sprayed from a container it emerges like a frothy cappuccino. Citrus fragrance. Very good for evening application, instead of night cream.

Manoi Tiare petal exfoliant – pleasant, subtle almond fragrance, this is a creamy exfoliant with small grains, not overly fine, leaving an immediate softness on the skin.

The company’s brochure asserts that its ecological philosophy matches that of the ancient Celts: “Celts believed that we all belong to the land rather than the land belonging to us and you are therefore unlikely to damage something that you belong. In addition, Ireland’s Irish name Éire is derived from a Celtic Goddess Éru who was considered to be the Mother Protector of the land of Ireland. She is buried beneath the Hill of Uisneach, which is the geographical center of Ireland. Folklore has it that when Celtic warriors were in battle, they retired to the bogs to treat their wounds.”

Another Celtic legend is about Tir na nÓg – the Land of the Ever-Young. Could Ógra be the key that opens the secret time portal?