Fashioned out of a landmark 19th century building, Indigo Hotel is a boutique luxury property conveniently positioned in the heart of Glasgow a five-minute walk from central train station.
Once housing the city’s first electric power station built in 1892, architects and interior designers at Ica deserve strong praise for their conversion efforts, which have created a 9-storey contemporary hotel while preserving the listed building’s 1920’s plasterwork and ceramics.

Oversized cylindrical metallic ceiling lamps and a vibrant wall painting of civic and cultural leaders greet one upon entering through revolving doors from Waterloo Street. Striking crimson and yellow armchairs and low-slung tables fill the ground floor space opposite the reception desk offering an inviting ambiance for informal conversation or business networking, an atmosphere enhanced by a bar stretching along the back wall.

If you happen to be there on a weekend check out the hotel’s ‘Fizzy Friday’ promotion which offers steeply discounted prices on champagne.

Honouring the intriguing history of Scotland’s largest city, the Indigo has dedicated both individual rooms and corridors to various facets of its growth. Aside from the colourful lobby mural, photographs of buildings, pubs and sculptures of note adorn several floors. In addition, bedrooms are partially decorated with large digitalised images of city scenes and places of interest.

The hotel also has a modest fitness studio with two treadmills, an upright bicycle, hand weights, a cross-trainer and a multi-gym.

A member of the Intercontinental Hotel Group, Indigo is perfect for international travellers for not only is it 30 minutes from Glasgow airport but also a short stroll to such places as the Theatre Royal, the city’s oldest performance venue; the Gallery of Modern Art, with its impressive portico; the spacious George Square with its many statues with the ornate Glasgow City Chambers opposite; and the ‘style mile,’ a collection of shopping malls that includes Argyle Arcade, House of Frasers, Buchanan Galleries, Princes Square, St. Enoch Centre, John Lewis and Debenhams.

While the hotel does not have its own parking facilities, there is a convenient car park next door at which hotel residents receive a twenty-five per cent discount.

Rooms on each floor are designed in a different color and ours, on the second floor, was tea green. An upholstered, padded bedhead dominated the high-ceilinged room, beside which was a wall-size digitalized image of a city building facade. A border of floral wallpaper around the ceiling granted the room a cozy, intimate feel. A nice gesture is that snacks, soft drinks and bottled water in the mini-bar are free. Toiletry products are Aveda and complimentary wi-fi is speedy.

A buffet breakfast is served just off the main reception area, complete with the traditional breakfast of blood pudding, bacon and flat sausages in the shape of a burger. Healthier options include poached eggs and smoked salmon. 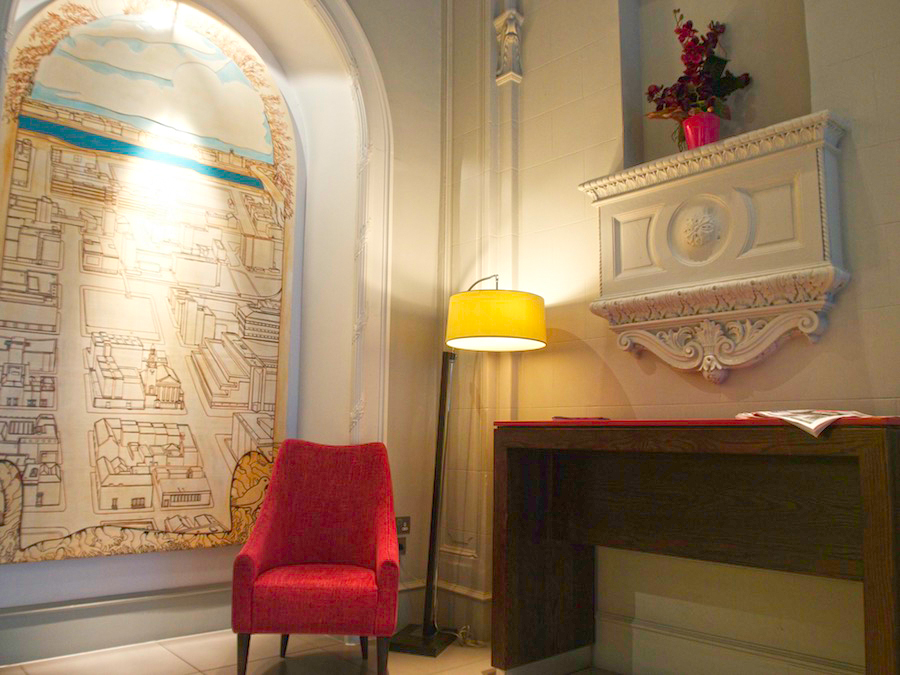 Interestingly, portraits of British celebrity chef Marco Pierre White – once the youngest chef ever to be awarded three Michelin stars – are everywhere, highlighting the fact that the hotel’s steak house has his branding.

Transformed from a derelict power station into a modern, comfortable hotel in a convenient downtown location, Hotel Indigo in many ways reflects a key characteristic of Glasgow – the spirit of reinvention.

Nestled in the tranquility of Nature deep in the forest, Anna Charisma several kilometers outside the town of Avrig in Transylvania is an elegant holiday retreat complete with outdoor hot-tub, sauna & fine food, with the soothing sounds of a nearby waterfall as an audio backdrop @epic.visits @anna_charisma_chalet #luxurylifestyle #luxurytravel
Experienced #Romanian #tourguide Adela Dadu, a rich font of historical information, leads us on a special carriage ride through the ASTRA Open Air Museum outside #Sibiu #Transylvania #transylvaniaguidesibiu #unforgettableexperience #luxurytravel
Panoramic Skyline Drive in #Romania along the breathtaking #transalpina in the Carpathian #mountains @enterprise_romania #luxurytravel #toyotahybrid
Terrific food presentation of their #tastingmenu by chefs Darragh Dooley and Dario Percic at Killeavy Castle Estate Armagh @killeavycastle #gourmetdining #gourmetfood #luxuryhotels #luxuryhotelsireland #tourismireland #irishtourism #luxuryrestaurants
Looking forward to hosting this practical #workshop on #travelwriting organised by #irelandwritingretreat See details onhow to book on their website #virtualworkshop #travel #writingcommunity
Check out our latest story from #scotland #scotlandtravel #scotishislands #isleofmull #iona #oben
“IQ for Creative Writing - How Questions Shape Stories. The Secrets of Flash Fiction.”
Enjoying my ne #dryrobe when #hiking not only #coldwaterswimming See full story on our website
A treat for the eye at every corner when staying at @waedinburgh #luxurytravel #edinburgh See story on our stay there on our website
Still have time to escape to this #luxury estate, one of its kind, and forget your worries for a while. See story on my website #prestonfieldhouse #edinburgh
I certainly enjoyed my two-night stay at one of #Scotland's leading #luxuryhotels, which re-opens today. Experience plush furnishings, an illustrious heritage & serene, bucolic surroundings
How many types of eatable #seaweed do you know? And can you recognize them in nature? We’ve talked to a #seaweedguru in #ireland🇮🇪, see the story on our bio link and how you can buy her #recipebook
Curious to taste a gin based on a 350-year-old recipe? Try @enjoy_gin1689 See full story on our website in profile @theginguide @ginmagazineuk @gin_member @theginsociety @craftginclub @gin_lovers
Few better ways to survive coronavirus restrictions than in the company of your favorite #wines. This one, a 6-year-old #pinotnoir from the Melville Estate in #California, is among my recent order from @winebuyers which also included choices from the Peter Michael Estate, Knights Valley, Orin Swifts & Herb Lamb. #winesonline
It’s #worldginday #today, treat yourself to real #gin Check my suggestions I’ve put together on my #luxurytravel website in the profile #cocktails #finespirits #ginday
Mere hours before final deadline for the inaugural Wild Atlantic Writing Awards, 500 words, #flashfiction & #nonfiction, 3,000 euro worth of prizes - https://www.irelandwritingretreat.com/post/countdown-to-deadline-midnight-sunday-may-31st
Celebrating #worldwhiskyday was so much fun and read about some of my favorite #whiskey https://worlditineraries.co/2020/05/14/world-whisky-day-travel-with-you-senses%e2%80%a8/
An interesting initiative by @virginwines and @drinks_trust to support #mentalhealth project by #charity @growingwellgrowinghealthy #health #wines #responsability See full story on our website