Inchydoney Island Lodge & Spa lies in a picturesque location near the most southerly point of Ireland in county Cork fronting several beaches along a series of peninsulas jutting out into the Atlantic Ocean.

Reached via a winding road that skirts hillsides on one side and the sea on the other, it comprises a series of buildings, with the main hotel as the central and largest one and a number of houses, some owned, some rental, adjoining it.

The exterior grounds of Inchydoney, owner by Des O’Dowd, are spacious with plenty of nearby parking and a network of interlinking pathways that lead to beaches and the hills beyond, excellent for leisurely walks.  Just last month, the hotel celebrated a 500,000 dollar redevelopment of the island headland of the same name on which it stands, which protects the natural habitat, and includes an amphitheater, a picnic terrace, specially-designed headland walk routes, outdoor concert-style seating and a walled wind garden.

The outside gardens of the hotel, which was named Ireland’s leading spa resort for the fifth time running at the World Travel Awards, are planted with palm trees (survival is aided by a favorable climate, with the Gulf Stream passing by here along the coast), flowers and bushes. A large open area decorated with small plants fronts the building.

The hotel’s facade is bright creamy white with large windows and open terraces along the sides lined with glass and metallic silver railings. An open patio on the right, to the side of the main entrance, hosts the ‘Dunes Pub – the Contented Plaice.’ The interior of the pub, featuring wooden floor, chairs and tables and maritime maps instead of wallpaper its the walls, resembles the distinct shape of a boat, the main bar being the bow with a shiny brass wheelhouse on it.

Immediately inside the hotel is a small anti-chamber with soft sofas for relaxation. Further on through a second set of doors is a spacious, airy lobby with an open fireside with brown marble frame to the left of the reception desk with a large chocolate-brown sofa in front and other, beige-colored, armchairs and sofas lining the opposite, white-wood walls. The floor is of broad pine beams. The reception desk is particularly enchanting, being a curved, single block of sculpted, lightly-varnished walnut. Tall pillars are gaily painted with sweeping strands of seaweed in marine blue, green grey and black. At one end of the lobby a winding wood and black metal staircase sweeps its way up to the bedrooms above while a thick blue and white tartan carpet leads in the other direction towards the elevators. At the bottom of the stairs a glass-fronted cabinet contains a diverse collection of Irish crystal vases, bowls and flutes and beside it are a sculptured sandstone, a human figurine, and an Impressionist oil painting of two lively horses, engaged in what seems a mating ritual. Further along is another stone statue, this time of a mother and child.

An eclectic collection of artworks also adorns the third floor, which houses the Gulfstream Restaurant and the residents lounge, including a colorful series featuring clowns, a large charcoal work depicting swirling plants, trees an a lake and road, as well as a slim copper statue of a trumpeter and a black metal figurine, headless, the woman’s feet curled under her, her naked, nubile body facing the wall.

The residents’ lounge is a square, spacious room featuring butter-colored sofas and matching carpet, with a bar on one side, a Yamaha grand piano standing beside it. Paintings line the walls, mainly oils on canvass. While there, the exhibition was entitled ‘The Island Collection’ by Marie Carroll, featuring diverse harbor scenes. Curtained windows; an open fire with a gilt-framed mirror above; large, round filigree-style lanterns above and a full wall of bookshelves; and shapely varnished wood coffee-tables make up the rest of the decor. 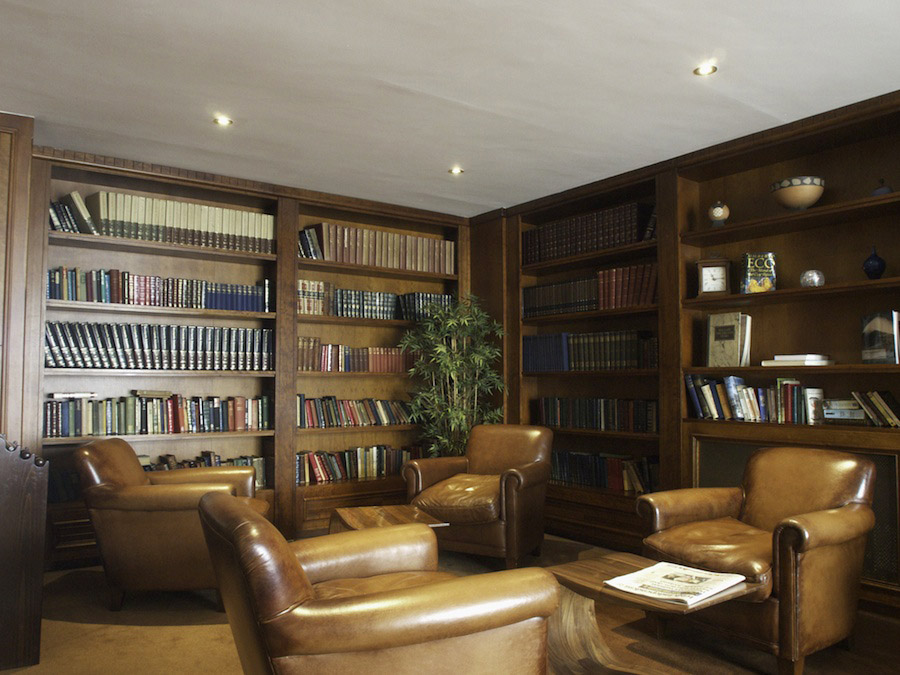 Our third-floor accommodation provided a glorious view over the ocean surf and a beautiful wide strand of beach, an outdoor wood-slate patio with slate-wood chairs making the view even easier to enjoy. Inside, the room is modern with dark-wood furniture with two bright Picasso-like modern paintings either side of a wall mirror. Carpeted in warm colors of creamy white and grey with subtle lines of silver on opposite walls. The bathroom, with black-tiled floor, had marble bath and walk-in shower.

‘The Gulfstream,’ the property’s third-floor restaurant, grants beautiful views across gently rolling hills, wide bays of the Atlantic and rocky cliffs. Its menu, provided by head chef Adam Medcalf and sous chef Alan Forde, features a number of products sourced from the nearby towns of Clonakilty and Castletownbere, and other parts of Ireland, including pan-fried scallops from the latter with black pudding (blood sausage) from the former, together with carrot puree, asparagus wrapped in pancetta, confit tomato and a red pepper essence. Other Irish-sourced dishes include baked breast of Clonakilty chicken, tender with a wonderfully crisp skin, filled with blue cheese from Cashel, Tipperary, accompanied by rocket, tarragon potato puree, glazed baby carrots, plum tomato compote, all in a rocket pesto cream sauce. There’s also breast of Skeaghanore duck from a farm in Ballydehob, west Cork, roasted with orange jus and a hazelnut crust and accompanied by potato royale, celeriac puree, rhubarb and Pak choi.  Another dish that was a resounding success is the roasted tender breast and confit leg of squab pigeon, with sweet potato puree, asparagus, sweet potato salsa and a ginger sauce.

County Cork is well-known for its cheeses so it is no surprise that the ‘Gulfstream’ offer includes many of them among its entourage, accompanied by west Cork honey, spiced plum chutney and home-made Parmesan biscuits, including Coolea, a hand-made cheese from the mountain farm of Dick and Sinead Willems near the county town of the same name.

Aside from the fine food, further pampering awaits guests at the property’s spa, which, in addition to the more traditional massages and facials and steam-room, sauna and gym facilities, also offers thalassotherapy therapies, including seaweed baths, mud treatments and a seawater pool. Inchydoney, which works with spa design and product partners Elemis and Les Luneides Paris, boasts of being home to Ireland’s first such thalassotherapy spa in 1998.

As a southern Irish coastal resort in a picturesque setting with easy walks and a strong reputation for fine food and diverse spa treatments, Inchydoney Island Lodge & Spa is hard to beat.