Pays de la Loire Atlantique is an oft-forgotten part of France overlooked by many international travelers but the diversity of its attractions and scenery makes it a region well worth visiting. Here are four ways to enjoy an area that is a mere two-hour train journey by TGV from Paris.

Situated on the Loire Valley, a 50-minute drive from the ocean, Nantes is one of the most innovative and dynamic cities in France, qualities that become obvious upon entering its central tourism office. Here, open-plan seating means visitors receive guidance from officials in a more personal way. Servane Le Neel, one of the city guides, is lively and inventive, conducting a most informative and entertaining city tour.

Being the birthplace of famed fantasy author Jules Verne, it’s not surprising his creations – including a giant, mechanical elephant – form part of the city’s comprehensive tourism offer. Known as ‘Machines de l’Ile’ (Machines of the Island), a riverside space, the warehouses of the former shipyards has been transformed into an open fairground, with various ‘Verne-like’ attractions such as the 12-meter high, 8-meter wide, 45-ton wood and steel mammal, which takes up to 49 passengers for a 45-minute walk. Other attractions include a ‘Marine Worlds Carrousel’ and a tall, branching ‘Heron Tree’ that visitors walk up for a fine aerial view.

“Le Voyage a Nantes’ is the name given to a 10-mile-long green trail that provides tourists with a weaving physical guide through 30 of the town’s most interesting sites, from the downtown area to the western tip of the île de Nantes. The route includes the Museum of Fine Art, Opéra Graslin, the Palais de Justice and the Castle of the Dukes of Brittany, the city’s most important historic building, as well as to contemporary art displays in various public places. With leading surrealist, Andre Breton, having once lived here, expect some interesting surprises. 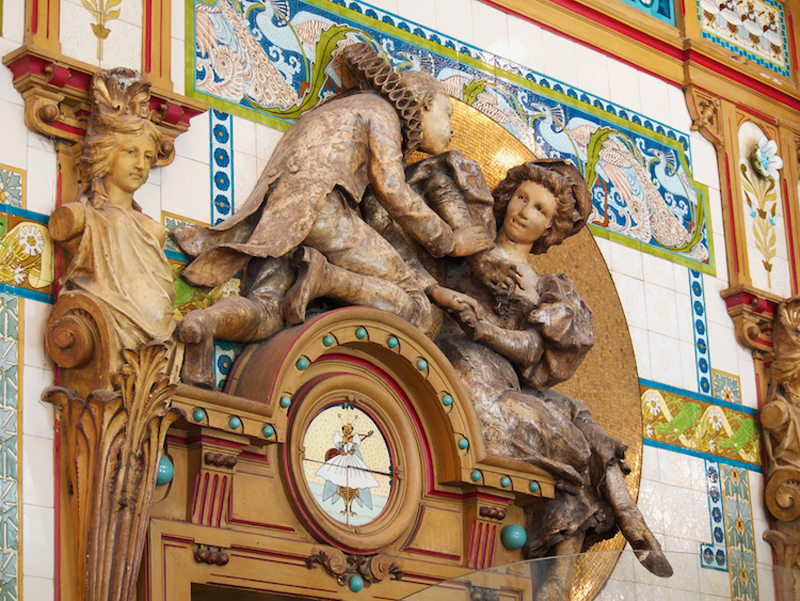 A visit to Nantes is not complete without eating at its most famous downtown brasserie, ‘La Cigale’ (The Cricket). Designed by the ceramist architect, Émile Libaudière, it is a landmark of classic art nouveau. Boasting several salons with original gilded tile-work and frescoed ceilings, guests are attended by white-aproned waiters. The brasserie opened in 1895 and serves delightful food, with starters that include crab meat wrapped in zucchini and goat’s cheese with strips of Serrano ham. Try the duck magret with pepper-sauce as a main – it comes pink, not red, and deliciously soft and tender, with a crispy skin.

There’s no better way to understand the history of Pays de la Loire Atlantique than a drive through its rolling rural countryside, especially luxurious when behind the wheel of a Mercedes Benz, care of Avis Rent a Car.

Start in historic Clisson with its medieval castle standing guard over the key bridge spanning the Sèvre Nantaise and Moine Rivers. Another remnant of the Middle Ages is the town’s impressive covered market which hosts a lively affair every Friday. During the French revolution much of the town went up in flames, but in the early 19th century wealthy art patrons, the Cacault brothers of Nantes, and their sculptor friend, Frédéric Lemot, rebuilt the town in the architectural style they admired so much in Italy. Highlights include a central church, and La Garenne Lemot, a graceful Palladian villa now used for contemporary art exhibitions.

Try lunch at the recently-renovated Villa Saint Antoine overlooking the castle where starters include homemade foie gras with a red-berry jelly on toasted brioche or snails a la Provencale with grilled croutons. A menu highlight is the delectable rib of beef for two with homemade Bernaise sauce and grenaille potatoes, washed down with a red from Domaine du Chateau de Marsannay.

Wine-tasting is a must in the Loire Atlantic, with Chateau de la Cassemichere, a 45-hectare vineyard in the heart of ‘the Muscadet region’ being an excellent place to start. A bridge-engineer by profession, Daniel Ganichaud purchased the vineyard in 2005 but the first Muscadet grape was planted here in 1740. Built in the early 17th century, the chateau, surrounded by five acres of woodland, also offers elegant accommodation. Plans are now underway to build an on-site museum. There’s nothing quite like sipping on its gold-medal winning offers with titbits of trout and fois gras crostini.

To top off a perfect day in the countryside, dine at the two-star Michelin restaurant, Thierry Drapeau, located within the Logis de la Chabotteries, a restored Bas Poitevin manor house. Chef Drapeau serves up a superb ‘Carte Blanche’ tasting-menu with course names a lesson in pure simplicity aka ‘asparagus,’ ‘egg,’ ‘scallops,’ ‘salmon’ and ‘guinea fowl.’ The names may be sparse but their creation and presentation border on the surreal, with, for example, the ‘asparagus’ browned with marrow and ham of Vendée, truffle jelly, rosemary flower “Mouron des oiseaux’ and savory cromesquis.

Les Sable d’Olonne and Les Chaume, its neighbor across the river, are delightful towns in historic La Vendée. In the former, in 1876, Gustave Eiffel of Eiffel Tower fame, designed the first casino in Sables d’Olonne and a nearby fish market reflects the same metal and glass style. Historic artifacts lying around, reflecting the town’s evolution, include a stone anchor dated BC and a six-meter-long anchor from an 18th century French galleon.

Lovely 19th century villas and chalets line the Remblai (promenade), a fine place to watch the ‘Vendée Globe,’ the world’s most prestigious single-handed ‘around-the-world’ race which departs from here in November. A ‘must-see’ is the delicate, artistic wall mosaics created by Danièle Arnaud-Aubin, using only shellfish. Lunch is best enjoyed at Les Mouettes (The Seagulls) looking out on to the harbor. Start with the local aperitif, Trousseminette, followed by the seafood platter, which includes scallops and hake served up with Jerusalem artichoke, rutabaga and potato tarte tatin. Les Chaume’s quaintness emanates from its Spanish hacienda-style homes with patios. Here, live 200 fishermen, many being descendants of 16th century Basque whalers.

The heart of Saint-Nazaire’s history is its port. Though there is nothing left of the myriad transAtlantic goods and passenger services it provided to Cuba, Mexico, Panama, and other exotic places, the city has converted its nautical heritage into tourism benefit, with the creation of ‘Ville-Port’ designed by Catalan architect Manuel de Sola. Various attractions have been created, including ‘Escal’Atlantic, the Ocean Liner Experience,’ by which visitors wander around inside a stationary cruise liner, imagining it’s on the ‘High Seas.’

Another intriguing tour is inside the submarine ‘Espadon,’ a reminder of how the occupying Nazi Third Reich turned the port into a base for U-boats. After enjoying the nautical sights (including a one-hour coastal boat ride with Les Croisières-Découverte), a meal at the nearby ‘Skipper Restaurant’ is highly recommended. Its diverse menu satisfies most tastes but don’t leave without tasting its version of Mouleaux with salted caramel ice-cream.

With an intriguing history, a landscape of rolling hills, many covered with vineyards, long sandy beaches and pretty towns that are magnets for creative arts, Pays de la Loire Atlantique is a tourism destination that deserves much attention.