If Hotel Thierry Drapeau is anything to go by, all hotels should be run by chefs.

Highlighting its rural location, one reaches this Relais & Chateaux-member hotel off a main to a minor road, along a leafy avenue with undulating fields either side and a stream rambling through them, past a classic, stone-walled chateau and on to a short driveway leading to the hotel’s chalk and glass exterior, with a resplendent olive tree squatting out front. Conveniently, an open parking area is nestled right beside the hotel, close to a room housing the property’s sauna and Jacuzzi.

The hotel and its companion restaurant, which is situated behind the walls of the Logis de la Chabotterie 500 yards away, are both located on important sites linked to what’s known as the ‘War in the Vendée,’ fought between Royalists and Republicans during the French Revolution, where General Charette was captured in 1796.

The hotel’s interior décor, with an open-style design, is a kaleidoscope of bright-colored furnishings and delightfully creative artwork, all encapsulated within a border of neutral tones on the ceiling, floor and walls. Soft, fuchsia-toned sofas, seats and armchairs; a tall, chrome metal statuette of a baker making pastry and three, slender ceiling-high, silver vases grant but a brief insight into the eclectic art tastes of owner and 2-star Michelin chef, Thierry Drapeau. Artists whose works are displayed include those of Jean-Alexandre Delattre, Cath Cousseau and L’atelier d’Elfrid. 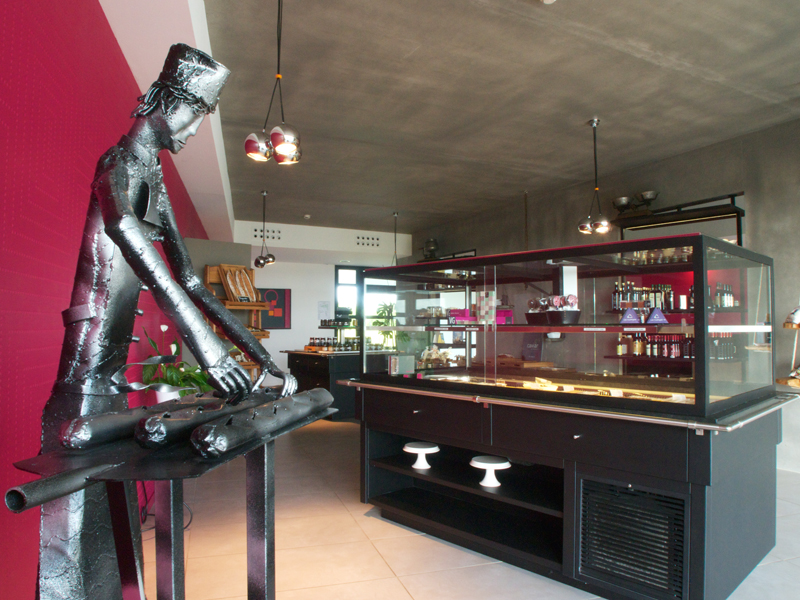 Interestingly, decorating an open area near the reception desk is a series of tables and shelves displaying a range of food products, such as olive oil, vinaigrettes, ciders, organic flour, jars of vegetables and foie gras, both local as well as from other parts of France and other countries, including Spain. There are also wooden racks of fresh breads made in the hotel’s kitchen, the first indication of the deep pride restaurant staff take in their own products.

Even more interesting, at least to chocolate lovers, is a glass-encased display cabinet nestling inside of which are delectable, finger-size squares, both light and dark varieties, and other assorted cocoa-based delicacies, from well-known Nantes-based chocolatier Vincent Guerlais, who has won the Meilleur Chocolatier Français award conferred by the Club des Croqueurs de Chocolat. The selection displayed in the hotel lobby is packaged specially for Mister Drapeau.

An open bar, with floor to ceiling windows looking on to the fields beyond, is located on the other side of the reception desk, with a glass-fronted wine cellar nearby.

Our first-floor room, reached up a short flight of stairs was of contemporary design – open and spacious, with a neutral color scheme of black, white with shades of gray. Furnishings were minimal with merely a television, a soft recliner and coffee table and a simple white writing table in one corner. The headboard was a feature in itself, built as a free-standing partition covered in velvet, with two egg-shaped, off-white reading lamps hanging from the ceiling either side. Rather than being housed in an enclosed room, the shower and washroom area occupied an open space adjoining the bedroom. A wooden patio outside furnished with table and chairs overlooked fields of buttercups, vegetable plots and a forest beyond.

As befits a two-star Michelin chef, food is the highlight of a stay at Hotel Thierry Drapeau, starting with the first meal of the day. Breakfast is hosted in an open space on the ground floor at which entrance a chrome metal miniature statue of a chef stirring a pot stands guard. Natural light pours in from the floor-to-ceiling windows. Adorning the white walls is an extra-sized knife, fork and spoon; decorative giant parsnips and carrots; and chrome metal, petal-shaped mirrors, with vases of various shapes and sizes inset in wall ledges. Guests sit at small square tables on soft fuchsia-colored chairs. Breakfast is prepared in front of guests in an open kitchen with each of the three courses, including French toast and cooked eggs, accompanied by home-made produce such as bread, croissants, yogurt (with mousse-like texture, served with fresh fruits), cured ham, honey, jams and butter. 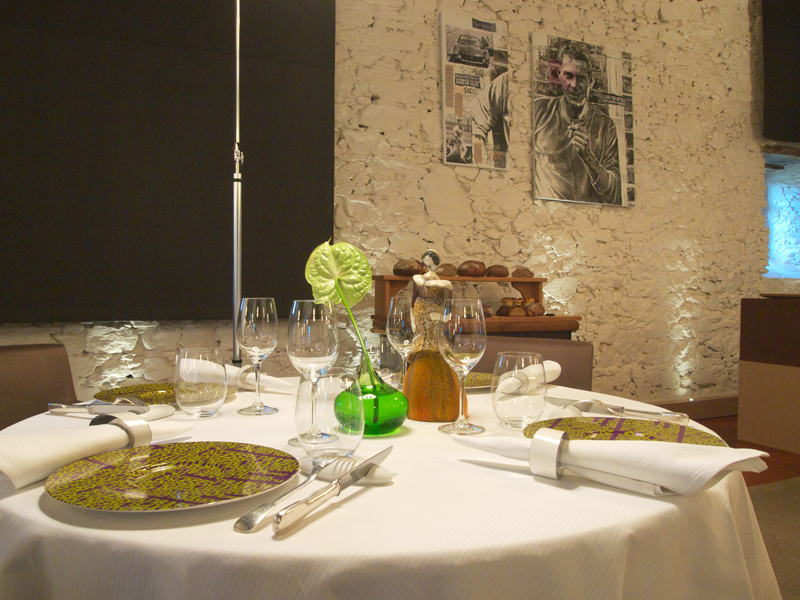 Two options are offered to guests – the à la carte menu or the more comprehensive, 10-course ‘Carte Blanche’ tasting one. While Chef Drapeau’s creations are complex, the titles of his dishes are a lesson in pure simplicity, with names like asparagus, egg, scallops, salmon, guinea fowl and duck. The asparagus dish, for example, is browned with marrow and ham of Vendée, truffle jelly, rosemary flower Mouron des oiseaux and savory cromesquis while a dessert called simply ‘lemon’ is a combination of tart, nougatine shortbread, creamy meringue, confit grapes, juniper berry crumble, gin and lemon thyme sorbet. Yes, the names may be sparse but their creation and presentation border on the surreal.

While Hotel Thierry Drapeau occupies a quiet, rural location, it is a mere 4-minute drive from the town of Saint-Sulpice-le-Verdon and within 12 miles of regional attractions such as Parc des Rochettes, Theatre de Thaile and Ponds Nature Park.

With such delicious food, a tranquil, rural landscape crossed by easy walking paths and a dramatic historical background, Hotel Thierry Drapeau ticks many of the boxes for those seeking a quaint, relaxing ‘hideaway’ vacation.