Converted into a luxury hotel from a former 15th century (Dominican) monastery, the San Domenico Palace Hotel in Sicily’s picturesque town of Taormina still retains much of its old world charm.

Located on a cliff rising high above the Ionian Sea, the property commands views of the ancient Greek theater to one side, the imposing slopes of Mount Etna on the other and the smooth, curved Sicilian coastline in-between. It also lies within a five-minute walk of the town’s main shopping street, the cobble-stoned Corso Umberto 1 and the medieval amphitheater, Teatro Antico, where the annual Taormina Film Festival is held. 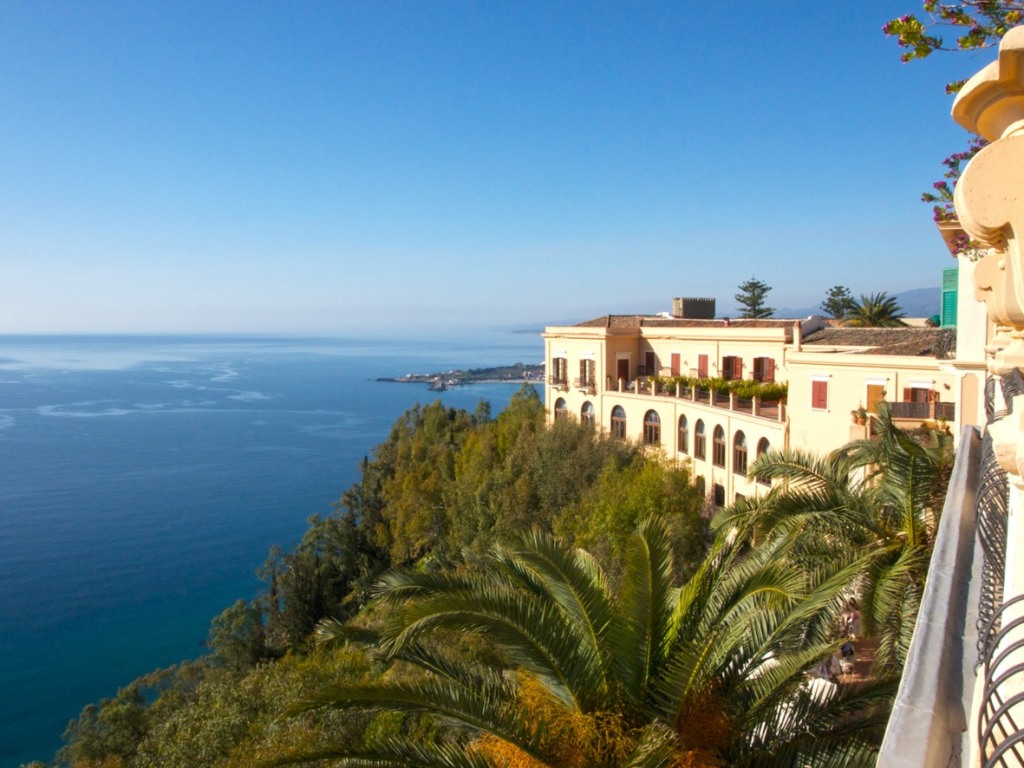 The property is awash in centuries of European history with its 105 rooms and suites set in two different wings – the garden wing, built within the former 14th century monastery, and the grand hotel wing constructed in liberty style in the early 1900s.

Gone are the stealthy steps of the monks, their psalmodic chants and their silent, cloistered cells, replaced now with renovated rooms, marble finishings, vaulted ceilings and velvet drapes. And instead of people of prayer, the property has been the playground of celebrities including Ava Gardner, Oscar Wilde, Salvador Dali, D.H. Lawrence, Richard Strauss, Thomas Mann, Maria Callas, Greta Garbo, Truman Capote, Richard Burton, Elizabeth Taylor, Rita Hayworth, John Steinbeck, not to mention a plethora of queens, kings, grand dukes, princes and barons including the Kaiser and the King Edward of England.

San Domenico Palace is reached along a cobblestone street lined with ficus trees, with convenient parking right outside its main entrance where marble wall engravings of two monks are carved either side of the door with a large metallic and glass lamp hanging above. A sturdy wooden door leads to spacious outer walled courtyard with a pond filled with plants and gold fish swimming quite contentedly in its center. Orange trees stand heavy with fruit.

Inside, the foyer boasts a classic Sicilian brown tiled floor furnished with potted plants, crimson and gold sofas and gilt-framed oil paintings depicting Biblical scenes including one showing Salome with the head of John the Baptist. A curved, stained walnut reception desk stands on the right and a series of apertures in the wall in front lead to tiled corridors to both left and right round a large glass encased inner courtyard, its sides a line of stone arches, the inner space festooned with flowering plants, metallic seating and tall palm trees, as well as ornate antique fragments of stone and marble. The right corridor leads to a convention center, as well as to the swimming pool and an outer garden overlooking the sea. The garden is adorned with mandarin, pomegranate, lemon and orange trees and sweet scents from assorted flowers including wild roses, bougainvillea, of jasmine, hibiscus and orange blossom titillate one’s nostrils. 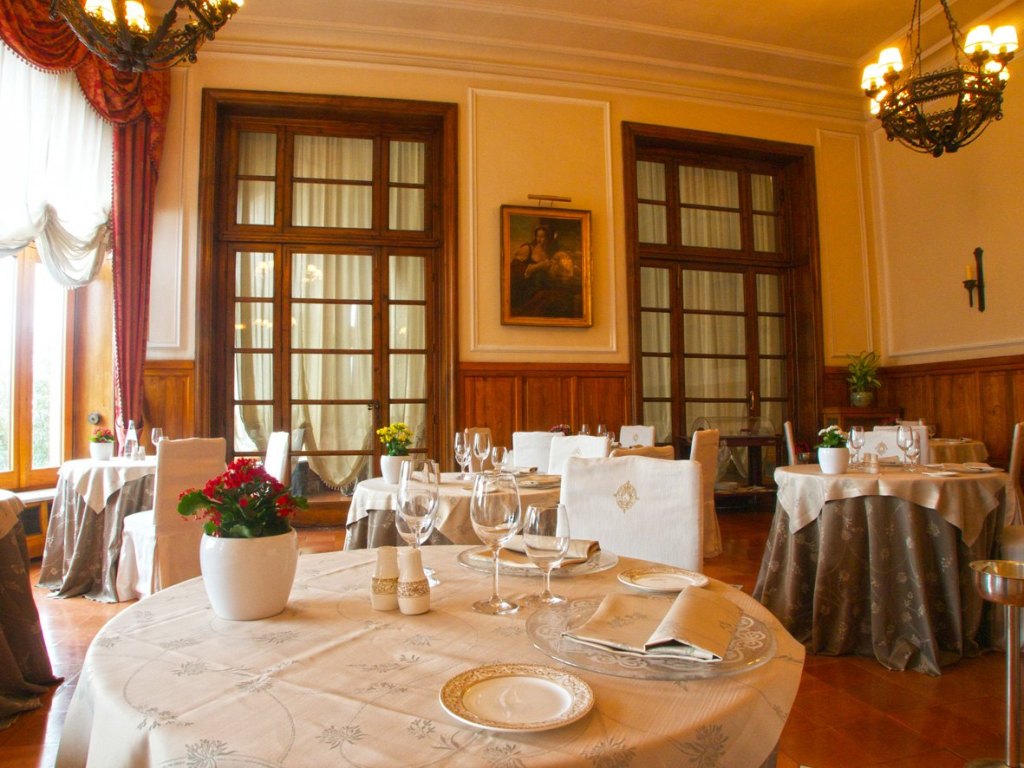 Inside, a nearby room, soothing it its silence, is filled with lifelike statutes of monks, long hand-held lamps, a shell-shaped marble fountain, and the remains of religious ceiling murals. Small rooms off the courtyard which may have once been confessionals now house merchandise such as clothes and children’s items. Beyond is another inner courtyard open to the sky lined with citrus trees, the sound of birds filling the air. Here is a labyrinth-like hedgerow, bougainvillea and gnarled ivy branches clinging to the arches and stone pillars lining its sides. A vaulted walkway surrounds the courtyard with a tall, bell-tower standing adjacent to it, overlooking it from high above. Beyond this, an entire corridor of rooms – once the cells of monks and nuns, their portraits painted above the doors, with wall lamps and potted palms outside each – have been renovated into guest accommodation.

Suites are on the second floor and granted a perfect view over the rocky, indented half-moon coastline far below and downtown Taormina to the left on the steep cliff-side. A large patio with soft seats either side and a small table in the middle enabled one to enjoy per-drinks under a blue sky as well as afters under the stars at night.

Inside the room, a classic design dominated, with gilt-framed mirrors, identical still-lifes – flowers in a vase – above the bed and four interesting framed prints of marble sculptures on other walls. A single dresser with shelves provided ample space for clothes. The overall scheme is of honey-colored walls with white trim and brown tiled floor.

San Domenico’s Les Bougainvillees Restaurant is high-ceilinged, half-wall walnut paneling with a classic Sicilian tiled floor, heavy crimson and gold drapes. Furnishings include hanging chandeliers, potted plants, standing lamps, a sculptured, ceramic Arabian head and face made in the nearby town of Catajeroni and an old copper bust of the Madonna. Oil paintings, medieval in style, line the walls. Some are portraits, others battle scenes, and one peculiarly depicting a pretty lady in unbuttoned bodice suckling an old, gray-haired man (waiters will explain the intriguing story about it). Table candles help emanate a cozy atmosphere over dinner.

Upon entry, the restaurant presents an impressive ‘passport’ – a thick, hardcover wine menu in which there are more than 1,000 choices. In terms of food, one can try the ‘San Domenico Flambes Dishes’ menu to have the added enjoyment of having your dishes cooked right before your eyes. A mixture of local sea and land products with Sicilian flavors will caress your taste buds, including curly salad, crunchy smoked pork cheek, balsamic vinegar dressing,  durum wheat spaghetti with grouper and cherry tomato. The fillet of beef with milk cream and green pepper is also memorable. Two other menu options are offered – a ‘Sicilian tasting menu’ and an a la carte one, including a delicious Carnaroli rice creamed with Nero d’Avola red wine, almond shaving and Ragusano cheese. 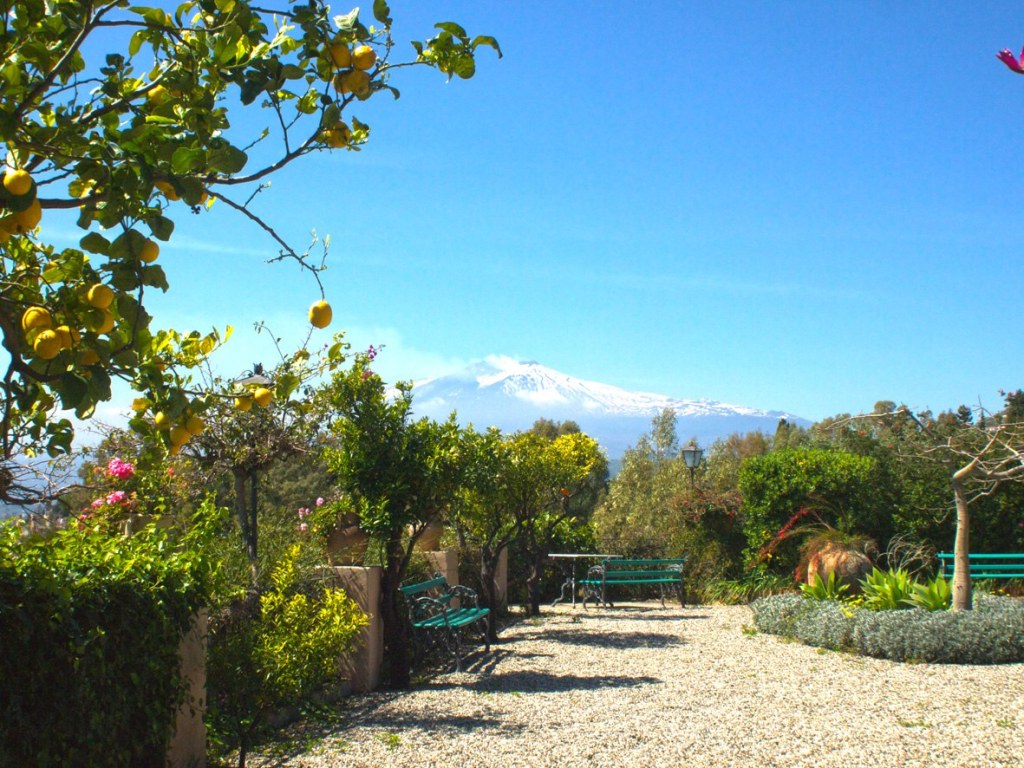 Breakfast is served inside or weather permitting, on the terrace overlooking the coast – range of pastry, sliced meats, fresh juices as well as Sicilian pastries and offerings such as three kinds of granitta served with fresh brioche. A second restaurant, Principe Cerami, named after the hotel’s founder Prince Giovanni Rosso di Cerami, earned two Michelin stars in 2010 and is open only during the season. The Oratorio de Frati Bar and Lounge is housed in what used to be the monastery’s refectory.

Aside from shopping and beach time, a stay in Taormina is not complete without a visit to the mighty volcano, Etna, and a most interesting tour is organized by Etna Experience. The tours, led by local guides who are multi-language speakers, include a hike up the volcano’s sides to around 2,000 meters, a lunch at a local restaurant, visits to caves as well as to Alcantara Gorge.

Steeped in history and emanating elegance, the five-star San Domenico Palace Hotel surpasses its star ranking, offering supreme comfort and the convenience of a short walk to Taormina’s main shopping streets, cafes and restaurants, as well as various tours within the region.