If it’s a fascinating, historical immersion in the lives of eclectic, larger-than-life characters you seek, a countryside retreat away from the stresses of urban life or to try your hand at various sports, Castle Leslie may just be for you.

Fame and Location – An epic 500-year-old history with a host of colorful, esoteric family characters through the generations.  Paul McCartney of Beatles fame held his wedding here. Situated at the edge of Glaslough, a quaint village in Monaghan, a county straddling the border with Northern Ireland, the Castle Leslie Estate has been the seat of the Leslie family since 1665 when ‘Fighting Bishop’ John Leslie expanded an old tower into a manor house. Well-connected politically in England, the family expanded its holdings until it owned more than 50,000 acres of lands in seven counties. Entering the grounds under an imposing stone archway and seeing a large expanse of field and woodland ahead, one immediately senses the power and influence the Leslies must have wielded before the 1916 Irish revolution and national independence. Though the estate was reduced to around ,500 acres after independence, it still retains a considerable expanse of woodland threaded with pathways leading to such curiosities as a rundown Gothic-style house and the tiny family graveyard. 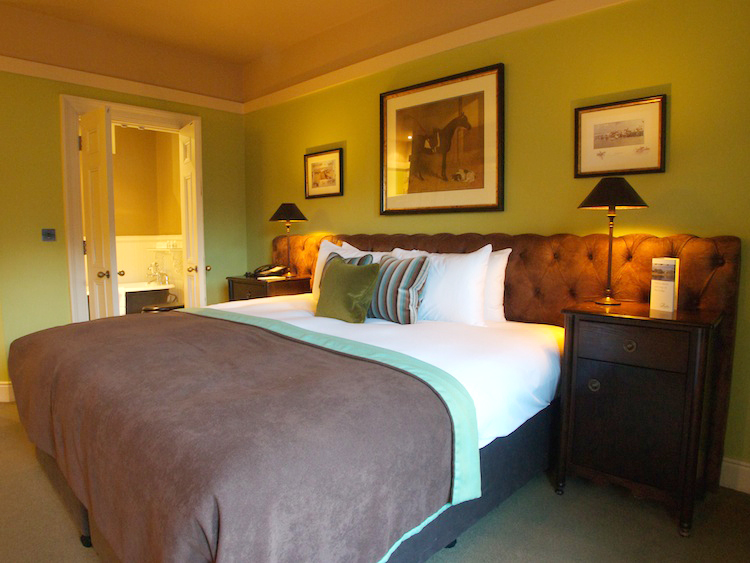 Luxury and comfort – More an Anglo-Irish mansion than a medieval castle, the Castle Leslie Estate was extensively renovated about ten years ago under the watchful eye of family member, Samantha, with part funding from the Irish government. The estate offers three accommodation options – 20 rooms (16 heritage-style and four Master), in the granite-walled mansion situated at the end of a curved, pebbled driveway; 29 bedrooms in the Lodge, a renovated building near the main entrance gate; and 12 self-catering houses. A short pathway leads from the parking lot to the latter, with metal horseshoes embedded in the cement granting the first clue as to the property’s overall theme. Other clues inside include a collection of framed photographs on the walls of thoroughbreds, and leather harnesses hanging from wooden pegs in the corridors.

Activities – Castle Leslie not only opened to paying guests some years ago but also became a strong equestrian center where residents and day visitors can learn how to ride or take a canter in the ,000-acre estate where there are 300 cross-country jumps. For novices, there is also a virtual horse to practice on. Other activities include lake fishing (mainly for pike), hot-air ballooning, kayaking, falconry and clay pigeon shooting, not to mention a massage at the hotel’s Victorian-style, 7-room spa complex where they use Eminence and Voya products. The ‘Grip Fast’ massage refers to the words on the family’s coat of arms. 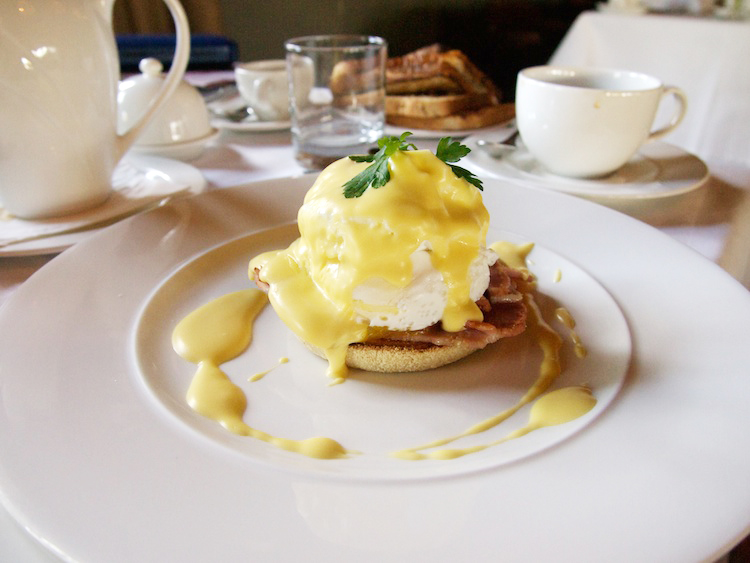 Informal and fine dining – Housing a bar and two restaurants, the Lodge area is the social hub of Castle Leslie. On the ground floor, just around the corner from the reception area, is the bistro-style ‘Connor’s Bar.’ Wood-floored, with a standing grandfather clock and framed hunting prints lining the walls, the outer part of the restaurant boasts large windows facing an outside stone patio. Further along is the main bar area where a slate and wood floor, stone walls, open fireplaces with turf and wood piles and hanging decorations of old copper kettles, irons and antler heads emanate a rustic, countryside ambiance. Upstairs is the pine-floored ‘Snaffles Restaurant,’ a large open room with skylights along one side where breakfast is also served. The breakfast menu at Castle Leslie is a varied one that includes kippers, eggs Benedict (with a undisputable Hollandaise sauce and high-quality ham) and scrambled eggs with salmon. Dinner, however, is the highlight of a stay, with creations based on local produce including thin, delicate strips of Lough Neagh smoked eel on a bed of risotto and beetroot; crab and lobster dariole, a creamy composite of shellfish flavors; white port soup served in espresso cups with biscotti-like croutons; roast breast of neighboring Silverhill duck cooked just as requested, with a red currant jus; pan fried turbot, its crispy sides and tender middle served with a Muscat white sauce. Desserts are exceptional, particularly the passion fruit parfait with roast pineapple and saffron – a well-balanced and refreshing mélange.  A special high tea is served at the mansion daily.

Leslie quirkiness – Dulcet tones of Beethoven’s ‘Moonlight Sonata’ may suddenly break the silence in the restaurant. Meet 97-year-old Sir John – former World War Two prisoner of war, pianist, painter and owner of Castle Leslie. The nonagenarian, who walks around wearing a Basque beret with peacock feathers protruding from the top, lives in one of the rooms in the mansion but often eats at the lodge area and is not averse to a tune or two or regaling guests with stories from his family’s colorful past over a nightcap of fine whisky. His father, Shane, was an environmentalist and multi-book author and though a Loyalist by background, switched his allegiances to stand for political office as a Nationalist. John’s brother, Desmond, a former fighter pilot, film producer and screenwriter, penned a bestseller entitled ‘The Flying Saucers Have Landed.’ His sister, Anita, an intelligence officer during the Second World War and an historical biographer whose subjects included Paul Rodin, and Madame Tussaud, married a Russian submarine commander. The family’s reputation for unconventionality and feistiness is hardly surprising considering the estate’s founder, Bishop Leslie married an 18-year-old girl at age 67, bore a number of children and died a few weeks short of his 100th birthday. 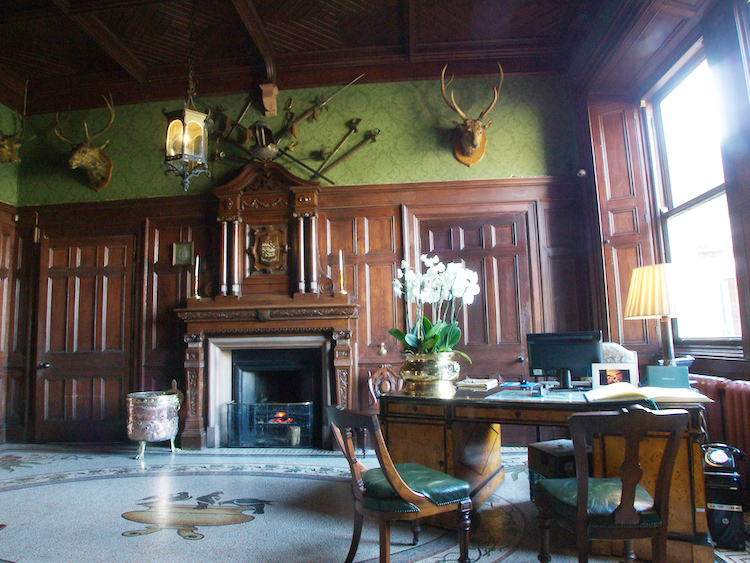 Art and antiques – The various rooms within the mansion itself are festooned with ornate decorations. The floor in the entrance area is a mosaic, a copy of a Roman villa in Ravena, Italy, with the coat of arms of the Leslie family hanging on an opposite wall. Beyond, in what is known as the Gallery, is a wall-size tapestry from Brussels dating from 1600 depicting King Solomon receiving the Queen of Sheba, while in the drawing room is the oldest and most valuable item in the mansion – a marble mantelpiece by the renaissance sculptor, Andrea della Robbia, made around 1490.  Reflecting the overall equine theme, a statue of Diana, the goddess of hunters, stands gazing out from a high recess on one of the mansion’s exterior walls.

‘A Gin Parlor’ – The restaurant’s gin trolley is a sight to behold – a table boasting 50 different types of the juniper liquor from countries as diverse as Scotland, Colombia and New Zealand.  How does one featuring lemon, ginger, coriander seed, angelica leaves, orris and gentian root, manuka berries and kawakawa leaves sound?