Basing the design of a hotel on a person’s character seems strange, naming a room in it after a dog even more so.

But when you learn more about the history of Maison Astor Paris the logic becomes clear.

By all accounts, John Jacob Astor IV was a formidable, non-conformist fellow. An adventurer by nature and heir to a huge family fortune, he broke early 20th century social etiquette by marrying a lady 18 years his junior.

For which he was quickly despatched from the US to Paris ‘out of harm’s way.’

Unfazed, John Jacob continued his adventures in the City of Light, befriending a Countess popular in bohemian circles, buying the property opposite her home, and enjoying weekly, if not nightly, artistic tête-à-têtes into the wee hours of the morning. Believing ‘coincidences’ were Fate’s way of leading one along one’s rightful path through life, he was also delighted to learn the street his new property was on was called ‘Astorg Street.’

Alas, the former military leader and author was a doomed passenger aboard the ill-fated Titanic when it went down. A lover of animals, it is reported his last act before succumbing to the ferocious waves was to rush below deck to release his pet dogs who were travelling with him.

Fast-forward and the very home he purchased after being sent into ‘exile’ and his untimely death, has been turned into an elegant hotel, one that reflects the essence of the man. And the naming of one of the rooms as ‘Kitty,’ is in honor of his favorite dog.

A member of Hilton’s Curio Collection and located on a quiet street between the Opera Garnier and the Champs-Elysées in the 8th arrondissement, Maison Astor Paris opened last June after a 17-month, 20-million euro makeover.

The hotel’s ornate lobby is bright, welcoming and avant-garde in style. A vibrant gold-colored sofa entices one to sit down and relax upon entering from the street. Fresh flowers in vases of varying sizes line a shelf and a collection of diverse paintings and photographs adorn the walls. These include an amusing cartoon behind the concierge desk depicting John Jacob in conversation with Scrooge McDuck, Donald Duck’s trillionaire uncle. 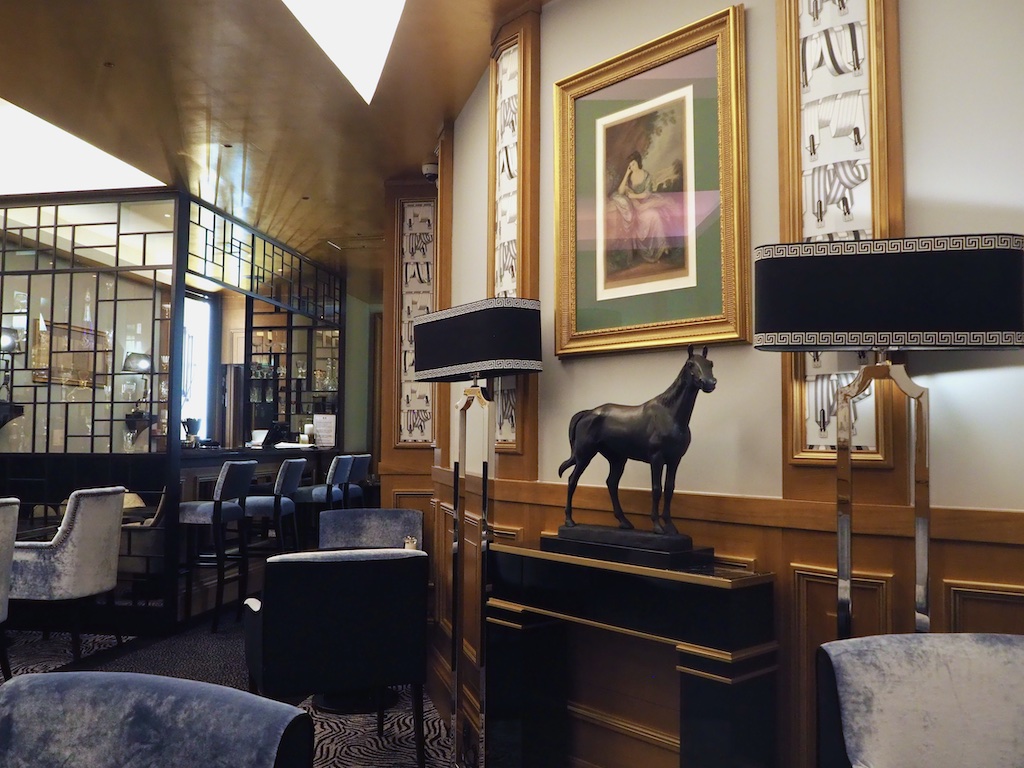 Adjacent to the lobby is ‘Le Club,’ an intimate bar, its horse-racing theme a nod to John Jacob’s passion for horses. His family owned a pure bred called Messenger which became the first of Standardbred lineage in the United States. Seated here, my companion and I enjoyed two special house cocktails linked to this story, ‘le John’ and ‘le Messenger,’ the latter a particularly tasteful mix of cucumber slices, lemon juice, Gordons, Russian Standard Vodka, Lillet blanc from Bordeaux (a fruity wine), angostura and absinth spray.

A multi-faceted character, John Jacob also penned a futuristic sci-fi novel entitled, ‘A Journey in Other Worlds’ and in recognition of his literary achievements, the design on the carpet on the way to guest rooms is the book’s cover. On the walls are illustrations from his book, as well as portraits of other well-known artists and writers.

‘The Kitty’ is a meeting room, also known as ‘Cabinet de Voyage,’ reflecting John Jacob’s world travels. A shrine to him, its glass shelves contain a miniature robot indicating his interest in technological invention, a replica of the Titanic, a small globe and an enamel horse. 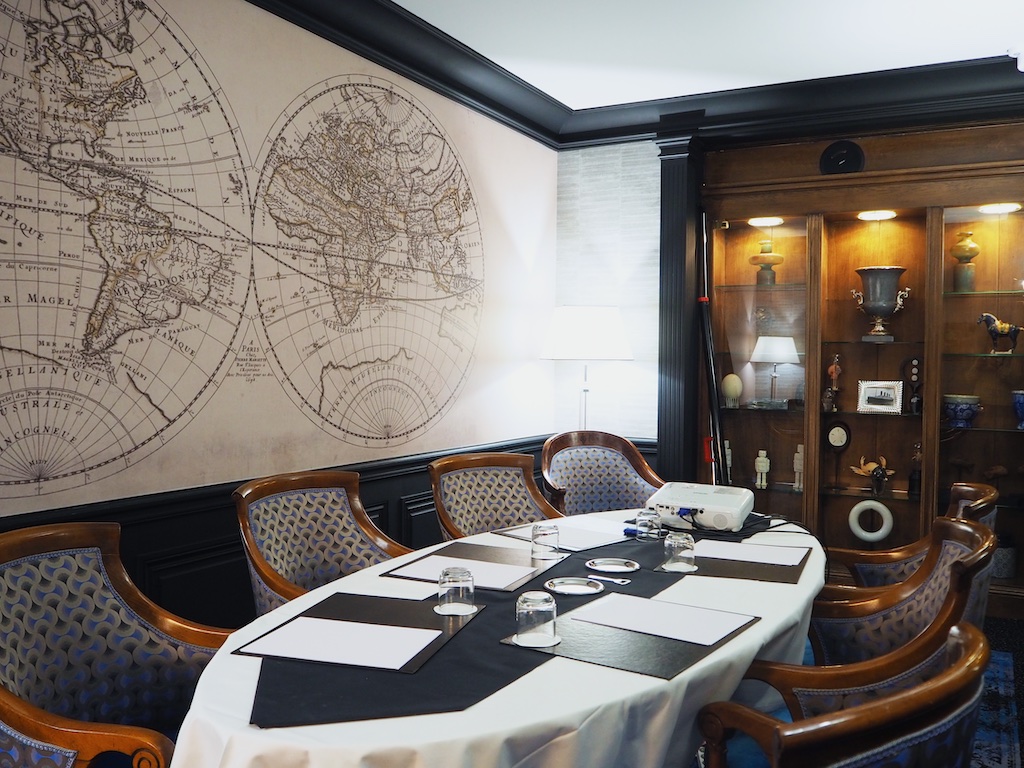 Our room, 217, was deluxe with a king bed, its Juliet balcony overlooking the glass ceiling of the restaurant. With a color palette of grays and black, it featured two floor-to-ceiling wardrobes, a spacious step-in shower, coffee-maker and large screen TV. Toiletries were by Parisian-based Sothys. Interestingly, the wallpaper design behind our bed showed playful, seductive cherubs in striped tops, the hallmark of Jean Paul Gaultier. 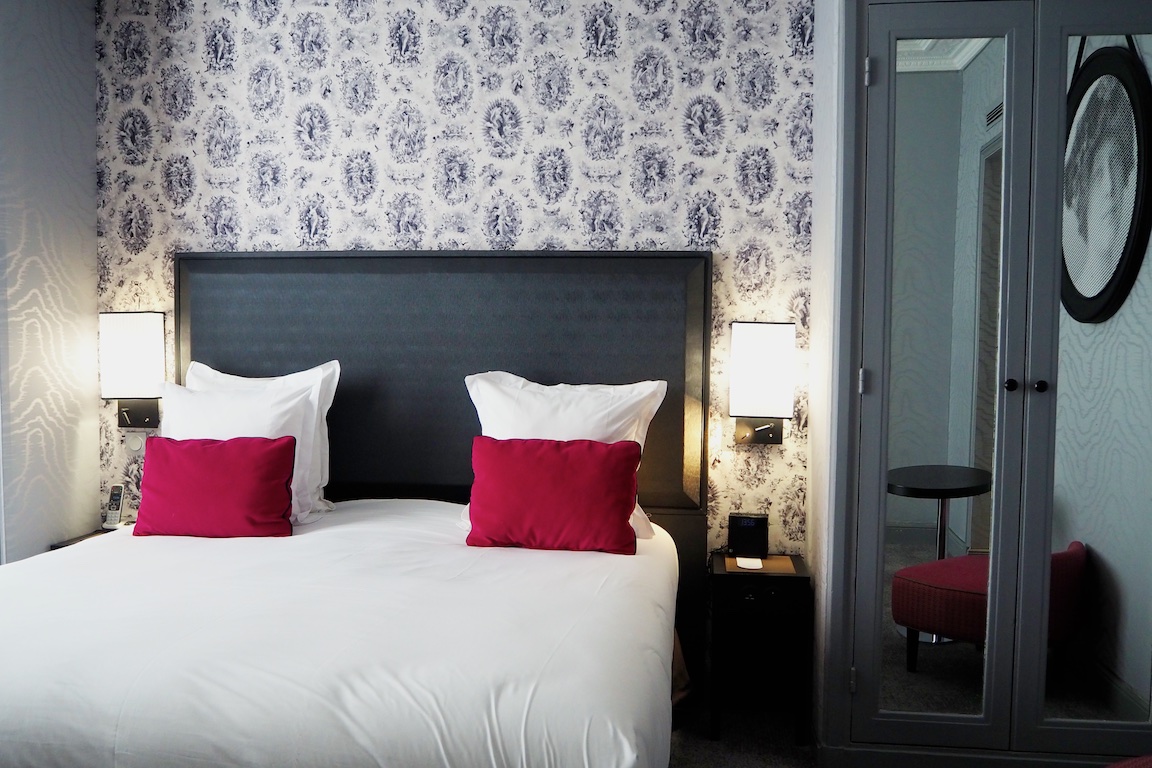 Dinner for us was a treat at Maison Astor Paris, hosted in the oval-shaped Salle à Manger. Reflecting art Deco style, it featured a contrasting color scheme of buttercup yellow blacks and grays. Intriguing paintings festooned the walls and a deconstructed chandelier dangled from the ceiling.

We started with a Manhattan and ended with a Duc de Loussac 1990 Armagnac. In between, we enjoyed chef Nicolas Clavier’s deconstructed salad with quail eggs and cod tartar served with capers, fennel shavings, seaweed, kaffir lime and red endives. We shared a most generous prime rib for two, sliced skilfully in front of us and accompanied by gratin potatoes and parmesan risotto, while sipping a Languedoc red from Philippe Chesnelong Valros Pezenas Herault, Les Creisses.

Hotel service was friendly and helpful during our stay without being too informal. As for location, Maison Astor Paris is a short walk from the Rue du Faubourg Saint-Honoré and haute-couture shops with brands such as Gucci, Hermès, Ralph Lauren, Chanel and Burberry.