Waking up to Royalty is not an everyday occurrence – nor do I want it to be – but it makes for memorable conversation in old age aka, “I remember the time I met King…”

But first let me perfectly honest, I haven’t actually met either King or Queen during my modest life to date, but Moroccan King Mohammed VI did arrive at the Waldorf Astoria Amsterdam – on the day I was leaving thank goodness, as a huge entourage accompanied him, making breakfast a stressful matter for the hard-working kitchen and serving staff.

Royalty staying at this hotel, however, indicates the kind of clientele the famed brand property caters to – and it does its best to keep the visits of such people secret. In King Mohammed’s case this was rather difficult to achieve as he decided to have tea and biscuits outside the front door on the street with some of his supporters.

Once a collection of six wealthy patrician houses built during the Golden Age, Waldorf Astoria Amsterdam was opened two years ago and is situated on the UNESCO heritage protected Herengracht (Gentlemen’s canal), enjoying a prime location in the city’s oldest canal setting within walking distance of luxury shops, museums and theatres.  Consisting of 93 well-furnished diverse rooms, some brandish such grand names as the Brentano, Roëll, Backer and Van Loon suites, the latter two displaying a 17th century painted ceiling and Neo-Renaissance style respectively.

The king loft room we stayed in combined light, pastel-colored furnishings and treated bare wood beams with modern amenities such as a 42-inch screen television, a walk-in shower, claw-foot tub and a Nespresso machine.

Like many of the other rooms, it was decorated in elegant furnishing with accents of lapis lazuli and stronger ochre colors, which officials say references Holland’s own Vermeer, whose paintings include ‘The Girl With A Pearl Earring.’ 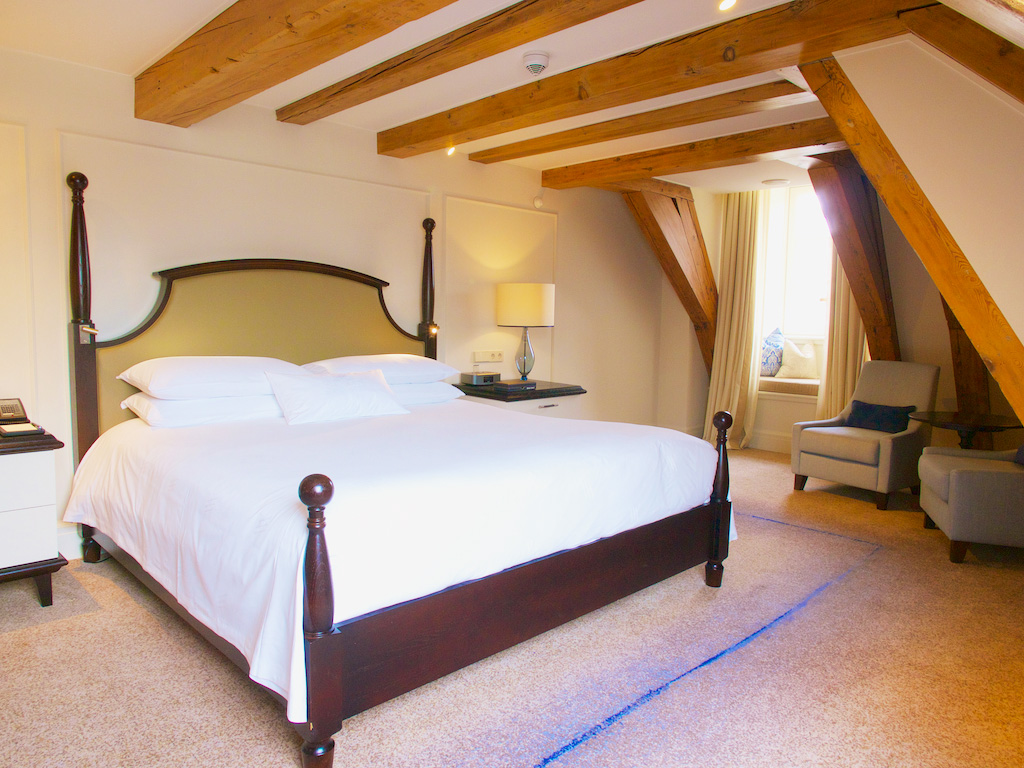 Under the eye of GA Design, best known in London for the Corinthia property, some aspects of the hotel are architecturally impressive. A grand 17th century wood staircase attributed to Daniël Marot, the architect who brought the Louis XIV style to the Netherlands, winds its way up from the lobby and the Maurer Room (the Italian room), named after the 18th-century Dutch artist Jacob Maurer, a master of trompe l’oeil grisaille and bucolic landscapes, acts as a private dining room. A fine example of Rococo interior, it seats twelve and its once bright yellow walls are adorned with sumptuous, full-size Dutch wall paintings. 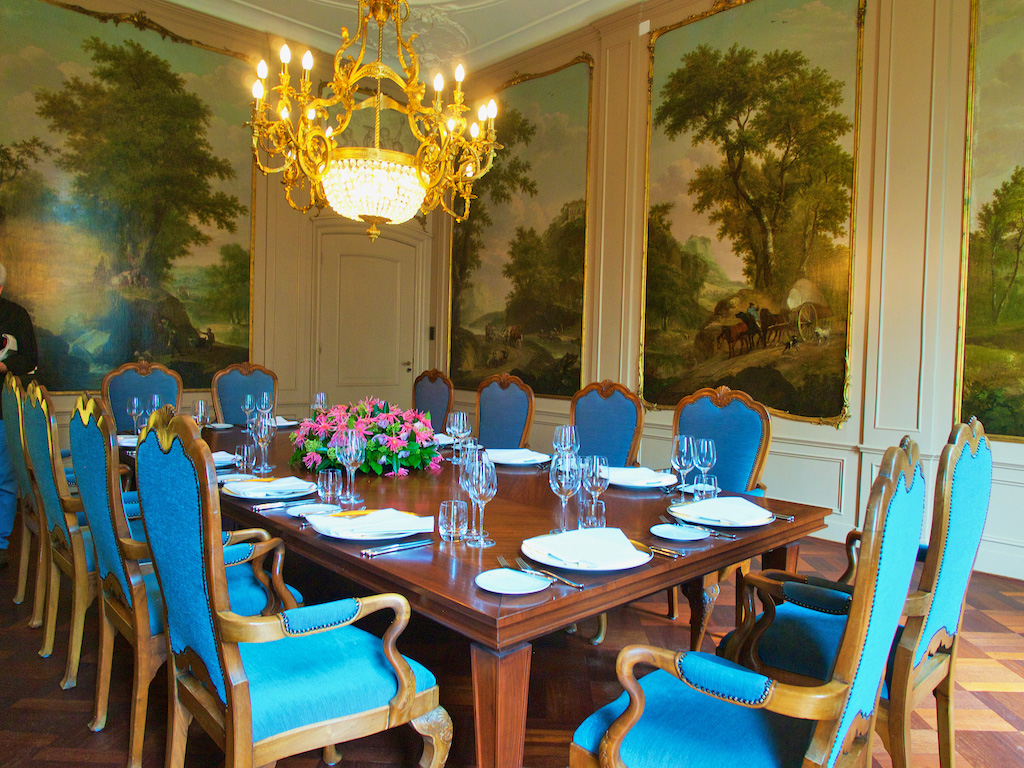 The Waldorf Astoria claims to have the largest private garden of any Amsterdam hotel but there is a ‘no drinks on the terrace’ policy in place as the open area between the two canals – the Keizersgracht behind the hotel and Herengracht in front – is historically and environmentally protected.

The hotel’s leisure facilities include the ‘World of Guerlain’ spa, a fitness center, steam room and a petite swimming pool.

Dining options include the 2-star Michelin restaurant ‘Librije’s Zusje’ which, under the supervision of executive chef Sidney Schutte, won its stars two years ago just seven months after opening and the ‘Goldfinch Brasserie,’ where you can enjoy a light lunch or a multiple-course dinner.

Unable to dine in either, we cannot vouch for diversity or quality of the fare. We can, however, vouch for the drinks in the intimate ‘Vault Bar,’ named so because it was formerly a bank vault. In fact, three of the six buildings upon which the Waldorf Astoria Amsterdam is built were bank buildings. There, in a cozy setting, talented mixologists Portuguese natives Wilson Pires and Tiago Vasconcelos concocted two creative cocktails for us, one, intriguingly, with the flavor of blue cheese. 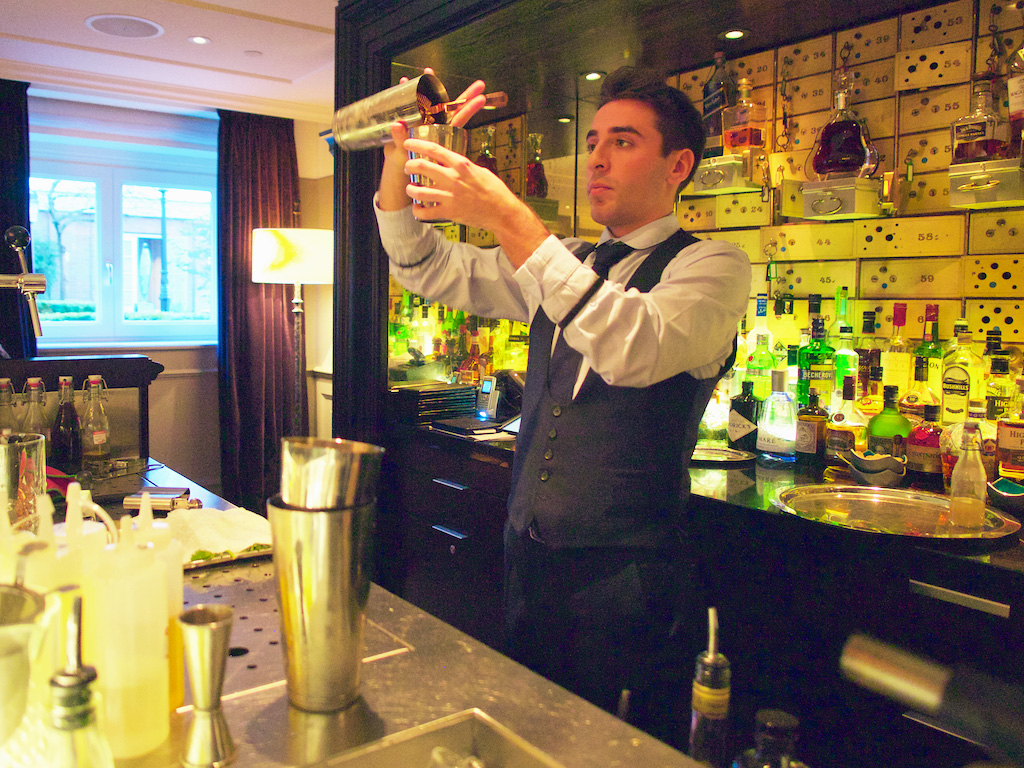 The ‘Vault Bar’ is one of two main indoor public seating areas, the other being the Peacock Alley, a cozy inner room opposite the main entrance, where an armillary sphere stands in recognition of the country’s maritime tradition, alongside hand-blown glass, Delftware, both ancient and modern, as furnishings.
Breakfast, even though it didn’t include sitting beside a King on a throne, is impressive and included a deliciously refreshing rhubarb juice, as well as mulberry, inca, chia and goji – a wide selection of berries not often seen together at hotel buffet tables.

One of the strong advantages of this five-star hotel is its location, within a ten-minute walk of the downtown area and its many museums. Yet, even that short walk isn’t necessary as literally across the street is the Museum of Bags and Purses, with a collection of 4,500 items. If that doesn’t suit your taste, then try the Amsterdam Museum, which, through video, art installations and audio guides, presents a thorough depiction of the city’s development down through the centuries.

Though only opened in May 2014, in terms of quality, the Waldorf Astoria Amsterdam sits comfortably alongside the other 25 such branded properties and provides a welcome addition to the Hilton Worldwide group.